(Editor’s Note: Some will find the name of this cigar to be inappropriate. If you are using a family or work computer, you might want to read this review elsewhere.)

Right around April Fool’s Day 2011, a post appeared on the Cigar Family forum talking about a new prototype OpusX release—and it honestly seemed like a joke. The name of the cigar was Fuente Fuente OpusX Pussy Juice and it wasn’t a joke. Rather, the 6 3/4 x 36 parejo was just another OpusX prototype that would be rolled in small quantities, never to be released for commercial sales. The unique vitola featured an open maduro tip, meaning you weren’t required to cut the cigar, something that Fuente claimed was unique to the market. In addition, the company also claimed it was rolled with seven different filler leaves.

While the name and appearance are both striking, the cigar itself was even more surprising and unique. Here’s what I said when I reviewed it in the summer of 2012:

I probably would have put down this cigar in the first ten minutes if it wasn’t an impossible-to-find OpusX, the pepper is that strong. The Pussy Juice, as you might imagine, is not a pinnacle of complexity. As with a lot of the Forbidden Alcove based cigars, it’s impossible to know how much time the FFOX Pussy Juice has spent aging, which is notable as all OpusX cigars spend a year aging at Chateau de la Fuente before being sold, and most agree that the OpusX smokes better with a few years on it. Still, the cigar should get more complex and easier to smoke with as time goes on, although I’m not sure there’s ever going to be an optimum that produces a cigar that is truly sublime. If you get a chance to try the Pussy Juice, have a big dinner, and sit back for one of the most unique cigars ever produced.

I had saved my last Pussy Juice to redux for this week wanting to know how the insane nicotine strength did over time and to see if the pepper would stick around after a bit of time.

Appearance-wise, it looks similar to how I remember the distinctive vitola. It’s a weird size and easily identifiable by both the nipple and the unique OpusX band. Aroma wise there’s a bit of cedar off the wrapper, but not much. From the the foot I pick up some nuttiness and cedar, but it seemed like a lot of the flavors, at least to the nose have been reduced. The cold draw gives off a sweet cedar, some sugar and faint hits of jalapeño pepper, perhaps some hope that things matured.

It was not the same experience starting only out. There still is a mixture of red and green pepper with some lemon peel. There’s a bit of saltiness on the tongue, but everything is reduced to a level of medium-full to full. What’s not anywhere close to medium is the strength, which is full, very full, albeit still reduced from the absolute nicotine bomb that it once was. As the Pussy Juice gets going some coffee and cedar develops. At the halfway mark the pepper recedes a bit and a sweet cedar that I find in many other OpusX releases becomes the dominant flavor. Coffee is still a secondary note, behind the peppers, and a creaminess emerges. For those wondering about the salty/sweet combo that the cigar was described as possessing, it’s there, albeit in a much different form given the sweetness is found in a cedar flavor. 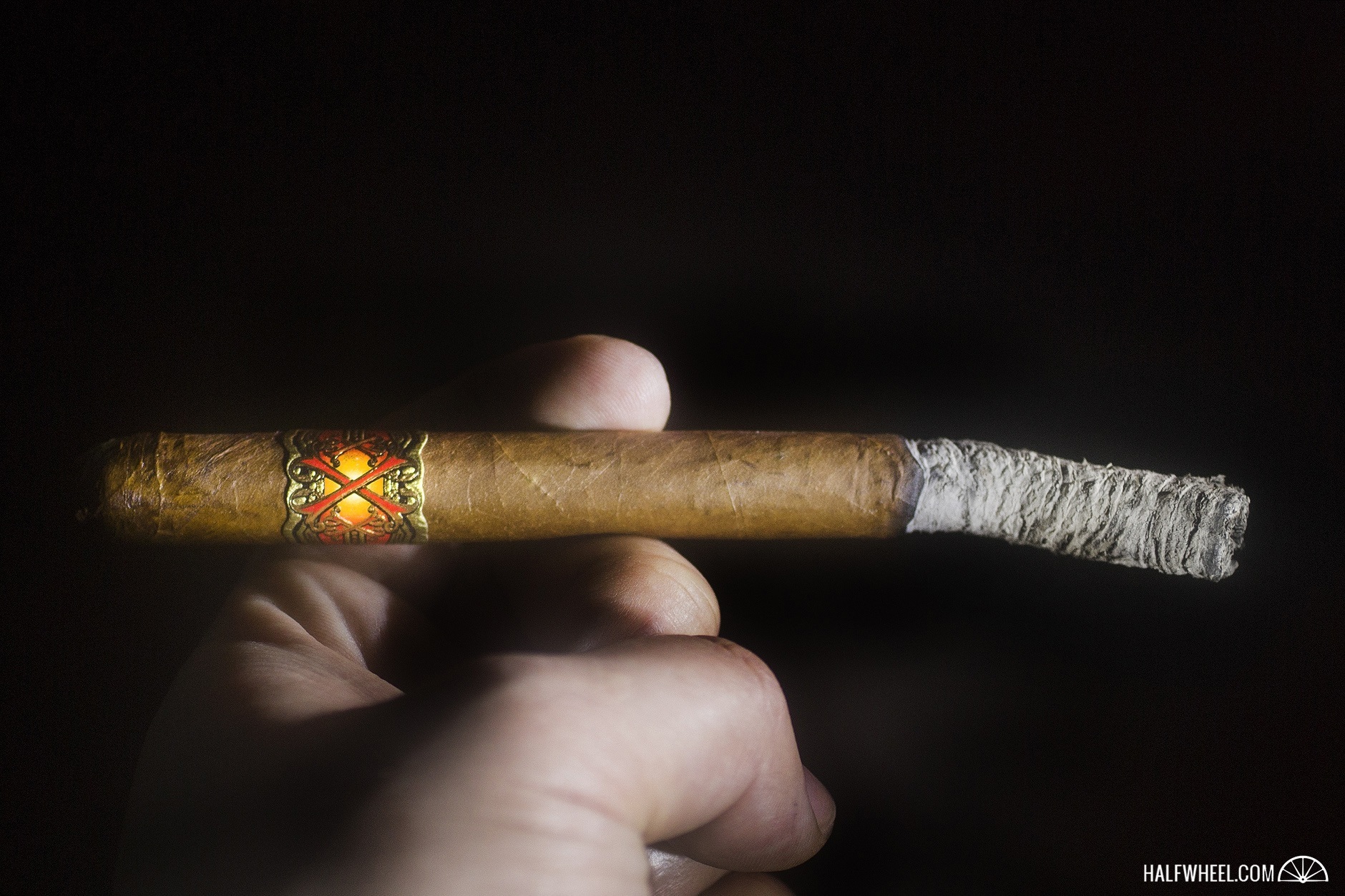 Construction is surprisingly good from a cigar that has issues staying lit a year and a half ago and I get a surprising amount of crooked ash. The draw is a touch tight, but never too tight, and I’m able to burn the OpusX Pussy Juice down with only one touch-up to below the one-inch mark.

For the first time in a while, I found a cigar that matured how I expected. Strength was still enough to make me a tad lightheaded, but it was nowhere near the danger levels I remember. The peppers were still a big part, particularly the unique nature of both red and green peppers, but they were no longer palate-wrecking. What I was left with towards the end was a cigar that tasted very OpusX-like, which I suppose makes sense. The Pussy Juice is now a much more manageable and probably enjoyable cigar, but it’s not the unique bomb that it once was. I don’t regret letting it rest, but if I had to smoke another, I’d want it to be fresh.