Thanks to a growing presence on Twitter and social media, owner Fred Rewey has steadily managed to grow the brand, and in early January 2013 it was announced that he would be joining the ever-growing list of companies being distributed by Gary Griffith’s Emilio Cigars. On January 23, Rewey announced that a pair of new vitolas would be added to the line: The Fugitive II, a 6 x 51 Perfecto that comes with an MSRP of $198 for a box of 20, or $9.90 per cigar; and the Rambler is a 5 x 50 Robusto that has an MSRP of $160 per box of 20, or $8.00 per cigar. The Nomad line now looks like this:

Also included in the news of the new vitola additions was the name of the factory where Nomad is producing their cigars: Tabacalera L & V in Tamboril, Dominican Republic. That information had previously been withheld by Rewey.

Here is what I said in my original review from April of 2012:

While it wasn’t love at first smoke with the Nomad Renegade, over time I did fall into a deep state of like with it. The first two left me fairly ambivalent, but the third and fourth showed a much different side of the blend that captured my attention from the get go and had it not been for the cigar falling a bit out of balance in the final third, would have really had me singing its praises. I have no hesitation recommending the five-pack sampler that Nomad offers – for $35 plus shipping you get one of each of the company’s five cigars, which is a good way to get introduced to the line. I’m a bit disappointed that there isn’t any smaller ring gauges than the 52 ring gauge Torpedo or the 4 5/8 x 54 Vagabond Figurado, as I think a sub 50 ring gauge could help the flavors stand out a bit more, so hopefully those will come in time. For now though, the Nomad Renegade is an enjoyable debut cigar that is worth checking out.

The Nomad Renegade’s wrapper is a medium brown shade with just a few very small veins and a fair amount of texture, though it’s not toothy at all. The pre-light aroma coming off the foot is an interesting combination of wood, brown sugar, a bit of spice, and a wheat and grain note that seems to frame everything. The cold draw is fairly firm with more spice present and a more intense lumberyard-style wood flavor.

It takes a few puffs to get any real discernible flavors or aromas out of the Nomad Renegade, and then finally the smell of a big, roaring campfire hits the nostrils and it appears to be game on in the flavor department. The nose is getting the bulk of the action in the first third, as the campfire note evolves into what I can only describe as a delicious, hearty dinner being baked in the oven. It’s not particularly meaty or spicy, but it is fairly complex. It’s not until the second half of the cigar where the palate gets any significant flavors – with a slightly charred wood note as the most noticeable. The final third stays medium-bodied with a flavor component that seemed just slightly lacking in terms of intensity, which is a disappointment given the very enjoyable smell of the smoke. 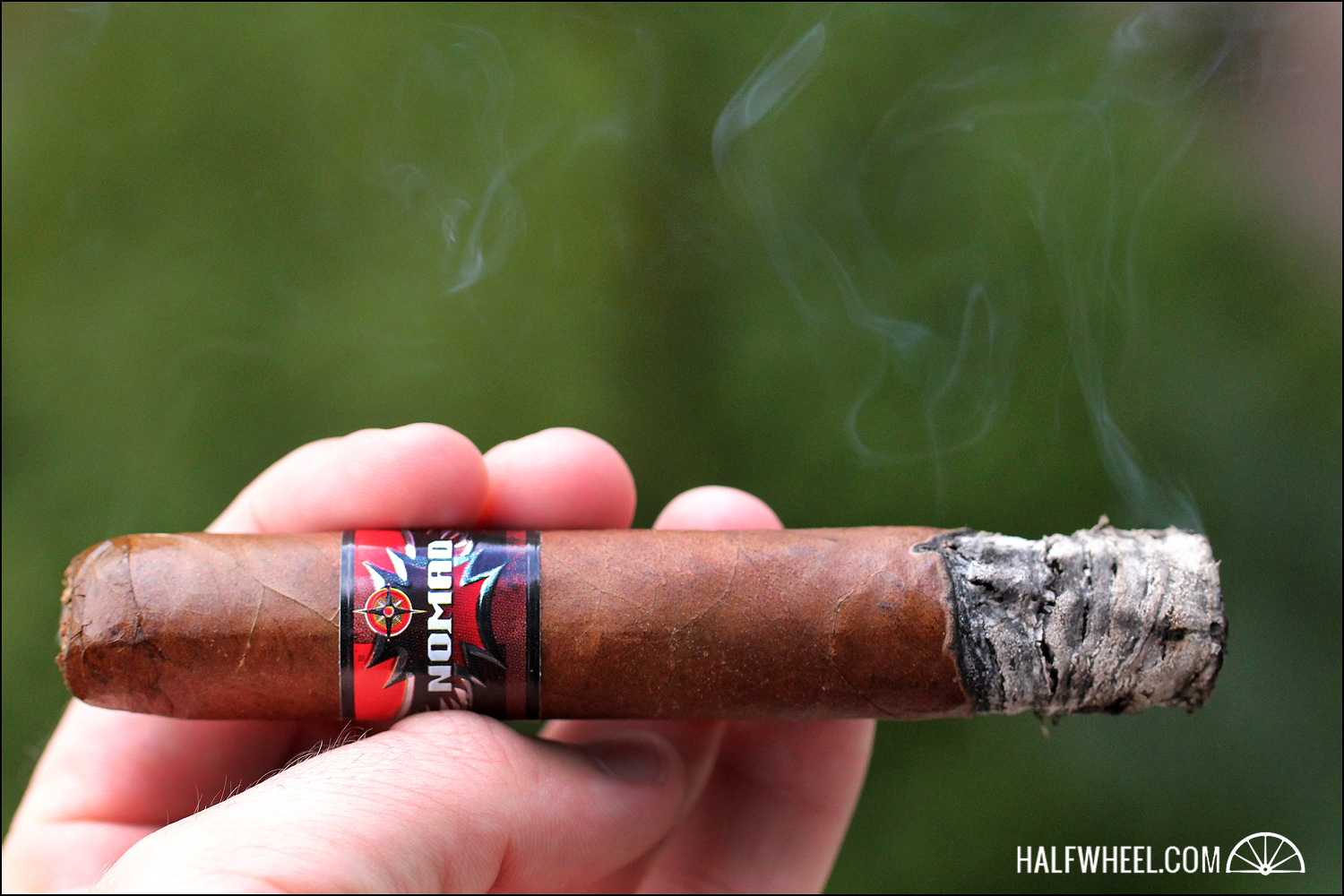 The Nomad Renegade performed well and despite a draw that was just the slightest bit firm, never seemed restrictive as far as air flow or limited in smoke production. The ash held on tightly without getting flaky or flowering, and there was never the need for a relight or touch-up as the burn line stayed incredibly sharp.

I can't say much has changed in my opinion of the Nomad Renegade since I first smoked. What worries me about the Nomad line going forward is the variation in flavor intensity that I noticed. If you come across one that's a bit more flavorful, it'll make you a believer pretty quickly. If you come across one that for whatever reason falls a bit flat – as it seems this one did – it'll be one of those cigars that ends up describe as 'decent, but sort of forgettable.' As of now, I still like the Nomad Renegade, would recommend trying one or two if you can, and am keeping a few in my humidor, with hopes that the future brings some increased consistency for the line.<