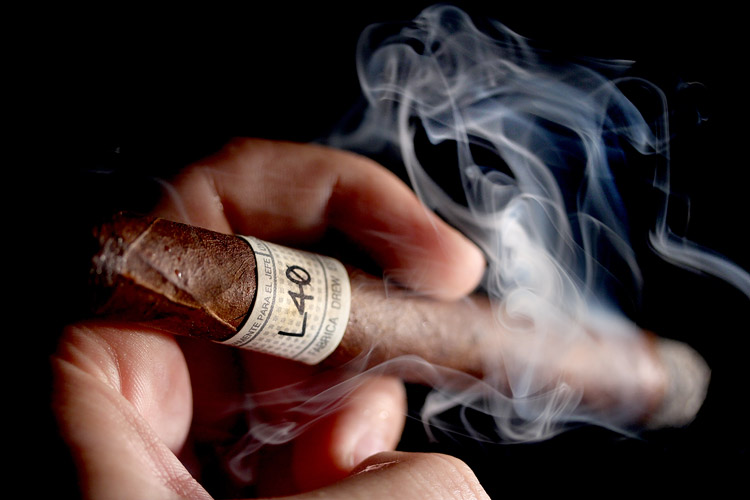 At the 2011 IPCPR trade show, Drew Estate unveiled their Lancero, the Liga Privada Ünico Serie L40. Like pretty much everything Drew Estate had at the trade show (Undercrown, Feral Flying Pig, Liga Privada A, MUWAT and extensions to Natural), it wasn’t a surprise. L40 had been floating around in prerelease forms in larger capacity than any of the aforementioned products to the extent that both that the origins of halfwheel reviewed it twice: once in February of 2011 and once in May of that year.

This is the first redux review that falls into a new mantra of how we conduct the Monday tradition at halfwheel, this is a review of a production version of a cigar that we reviewed as a prerelease. This means, the full history needs to be told.

Steve Saka, president of Drew Estate, gave a pretty lengthy rendition of the origins of the cigar in this February interview with CigarExplorer and the transcript reads:

We’ve been working for about a year on a Lancero. And I have to be honest with you we’ve pulled the trigger on the final Lancero blend. It was about three and a half, four months ago. We had two different blends kind of going on the Lancero. We had what I would consider a more normal path, it was a really spicy, kind of peppery Lancero experience. But for me, Lanceros are one of the formats that I don’t typically smoke. And the reason why I don’t typically smoke them is because they are mild or they’re strong and they tend to be one-noted.

So even though that Lancero I thought held up to other things in the marketplace. It wasn’t really truly a cigar I would smoke everyday… because I’m not a Lancero guy, because of that. So we went back to the drawing board and we took another turn and I ended up making a Lancero that is a lot more complex, a lot more nuances. It’s not mild by any stretch. On a ten point scale, I think would be a seven probably strength-wise. But it has a tremendous amount of complexity and nuance that I personally feel is very seldom in a Lancero blend.

And I’ll admit I had to cheat a little bit. The Lancero is a 40 ring gauge instead of a 38 ring gauge. I couldn’t accomplish the flavor profile that I wanted in 38. And that actually served as the inspiration for the name. We were just calling it L40, Lancero 40 Ring Gauge, in the factory. And that’s what we’ve decided we are going to sell it as and it’ll be part of the Ünico line. And that will be released sometime during the summer, the L40.

I don’t know how consumers are going to adopt. I’ve always told people with the Dirty Rat blend, it’s too strong for 99% of the consumers. It’s too expensive because it’s too difficult to make such a small cigar with so many different tobaccos. When I look at this Lancero I know that had I gone the spicy route, that was just super spicy and straight forward, it would have been a slam dunk win. I’m probably taking a risk this way. But I know in my heart it’s truly a Liga Privada in this way. I think like any other products, I think you’re going to find people that really love and I think you’re going to find other people that are going to say, “It’s not really for me.”

The Lancero won’t be a limited release. I don’t expect to sell a lot of them because it’s obviously for a very finite group of consumers who like Lanceros.

L40 would debut at IPCPR, but wouldn’t actually land in retailers until October 27, 2011 when Casa de Montecristo held an event for the Liga Privada UF4, where a number of boxes were on hand. L40 wouldn’t be seen again until an event at Nat Sherman on November 29, 2011, where a similar number of boxes were on hand. During the first week of December, 450 boxes of 15 cigar shipped, the first national shipment of Liga Privada Ünico Serie L40.

Despite Jonathan Drew and Saka’s reservations about the cigar and its ability to sell, that shipment quickly sold-out, and L40 now stands like the rest of Liga Privada: demand outpacing supply.

Visually, the L40 is sort of what you would expect. The dark Connecticut wrapper has an unbelievably strong aroma: leather, earth and dark pepper; aged and nicely melded together. From the cold draw, there’s a very sweet brownie cocoa, citrus, earth and leather. It begs with a dry cedar, cocoa underneath and some toastiness in the back of the palate. From the get go, you are reminded that the L40 is a Liga Privada as the unbelievable smoke production is recognizable from the start. Flavors stay earthy with sweetness coming from cocoa and caramel, a solid pepper note and hints of citrus and creaminess. The five or so months on these has done wonders in terms of deepening the flavors.

Strength is medium-full to full, nowhere close to its Ünico Serie siblings in the form of Dirty Rat or Feral Flying Pig, but still on the heavier side of Lanceros. Construction is exactly where you would think it would be, solid draw, great burn and that signature smoke production. For those that subscribe to the theory that says Lanceros burn hot because they are Lanceros, and not because of quick smoking, this is one that stays quite cool.

The Bottom Line: I do believe the fact that Steve Saka is not a fan of Lanceros didn’t help this blend. For me, the L40 was a let down, not a bad cigar, but not a good Liga Privada. The bar has been set so high and in every other case, Drew Estate has outdone themselves with Liga Privada. While I think the few months of rest has no doubt helped L40, it still is the least complex Liga Privada I’ve smoked. When I smoked this back in May, I was shocked at the lack of pepper. While that has been fixed, I guess that wasn’t my issue. Despite all that, a not so good Liga Privada still translates into one of the better Lanceros on the market.