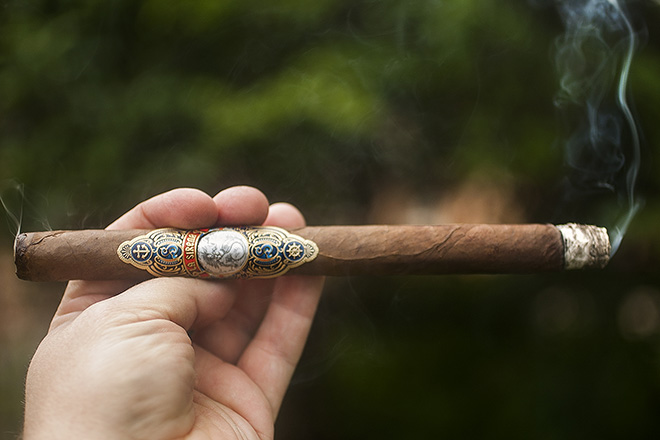 On May 13, 2011, the La Sirena A debuted as part of the celebrations for Brand Ambassador Arielle Ditkowich’s 25th birthday. Rolled at My Father Cigars S.A. in Estelí, Nicaragua and sold through Miami Cigar & Co., the La Sirena line now boasts eight different vitolas after the recent addition of the La Sirena Lancero, exclusive to Silo Cigars in Knoxville, Tenn., and the 7 1/4 x 56 Salomon Dubloon. Unlike the rest of the La Sirena vitolas, the A and the Dubloon both come wrapped in a Habano Oscuro cover leaf as opposed to Connecticut Broadleaf which is used on the rest of the line and the Lancero will also be sold with both wrappers.

Here is what I said in my original review in March of 2012:

There is no mistaking this is a Pepín blend from the initial blast of black pepper to the considerable strength of the smoke. Usually with cigars of this size, I am concerned about the profile getting monotonous and stale, but that just did not happen with the La Sirena A. It was extremely flavorful, fairly complex, had a building strength, performed perfectly construction wise on all samples and honestly, was just a joy to smoke. And at $12.00, this is not a bad deal either. I am not usually one to smoke cigars this large, but if I am in need of a two hour smoke now that the weather is getting warmer, I will definitely have some of these around, not only to smoke, but to share as well.

As expected from a Gran Corona vitola, the La Sirena A is quite long when held in my hand, and the wrapper is a medium coffee brown with a bit of oil present. The overly large band looks great on this sized cigar and the A has the perfect amount of resistance when squeezed. There are quite a few veins and bumps up and down the length, almost to the point of being distracting. Aroma coming off of the wrapper is strong dark chocolate, coffee, cedar and leather.

The flavors start out strong right out of the gate with notes of dark and slightly bitter chocolate, espresso, leather, cedar and earth. There is a surprising amount of black pepper on the retrohale—almost overwhelming—but it starts to calm down quickly to more manageable levels. I am noticing some spice on my tongue that comes and goes and also a wonderful tart sweetness that reminds me of lemon at times. The second half features more creamy and sweet notes, with nuts, leather and chocolate leading the way. While the pepper picks back up at the end a bit, the spice from the first third dies down to nothing by the end of the cigar. In addition, the tart lemon sweetness from the first third morphs to more of a generic fruit sweetness in the second third, but it still blends very well with the rest of the flavors in the profile. Construction-wise, both the burn and draw are excellent. Surprisingly, one of my samples only took only took about two hours to smoke, about 10 minutes less than in my original review. The overall strength starts out in the low medium range and ends just below full mark by the end of the cigar. The smoke production was about normal, and the nub was quite cool at the end when I put it down with about three froths of an inch left.

Being a Pepín blend, I was interested to see how these have aged in a little more than a year. The answer is (surprisingly) not much. The signature black pepper is still around—especially on the front end—and the sweetness seems to be a bit stronger in the final third, but other than those, this cigar was pretty much as I remembered it from the first time around. On any other blend, that might be a problem, but this cigar is so good that I just did not mind. While I don't smoke many Gran Corona-sized vitolas as practice, I just can't imagine many being better then this one. An excellent example of an A vitola at a decent price, and one that I am willing to bet flies under many people's radar.