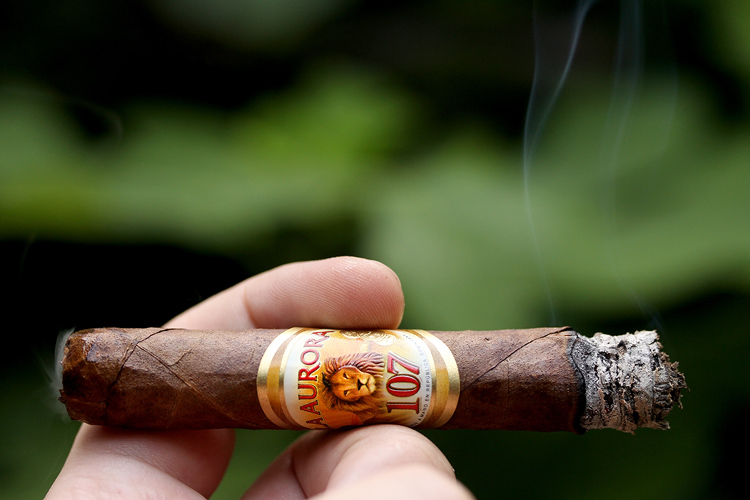 About two years ago, myself and others went to Twitter to convince Guillermo León and José Blanco that the popular La Aurora 107 blend needed to be made in a Lancero. Eventually, after some persistence and retailer commitments, the La Aurora 107 Lancero came to life. Oddly, I chronicled the history in an editorial, which you can read here—this was back in the early days of TheCigarFeed, so I’ll admit, it could be easier to read.

About a year ago I reviewed the cigar, which I guess was somewhat of a redux in of itself, but here’s what I said:

This cigar will always hold a special place in my heart (or humidor), fortunately it’s actually a really good cigar. While it’s not El Laguito No. 1, this is one of the best constructed Lanceros on the market and when you smoke as many Lanceros as I do, it shows. Smoke production is unbelievably good, and with the increase in body, this cigar becomes something more than just a good cigar. I do think that the Corona is still the best vitola in the line, but the Lancero is still my favorite for aforementioned other reasons. What’s most surprising is how much this cigar has added with even an elementary amount of aging, something I don’t think many suspected.

It is still definiteivly a good-looking cigar, although this example seems both redder and to contain more spots than most have. In addition, there’s a lot more oils on the 107 Lancero than most examples, but that’s not a bad thing. Aroma from the wrapper is a beautiful dark leather and sweet nuts, rather full. From the foot a sweet creamy nuttiness and a dark citrus note. Cold draw from the La Aurora is open, which is peculiar, with sweet creamy nuts, a tingle around the lips and some dry citrus.

The 107 Lancero starts with a great nuttiness and just a touch of white pepper. It’s very detailed and developed. Eventually the nuttiness settles in as the core of the first third with citrus, chocolate and a touch of harsh peppers. Unfortunately, after and an inch and a half, all bets are off. Earthiness begins to take over as the pepper gets more prominent and harsher. Midway through the cedar and toastiness that I recall join the campaign—but at this point, it’s rather linear and hard to really discern. Most noticeable, all the touches of complexity are gone. 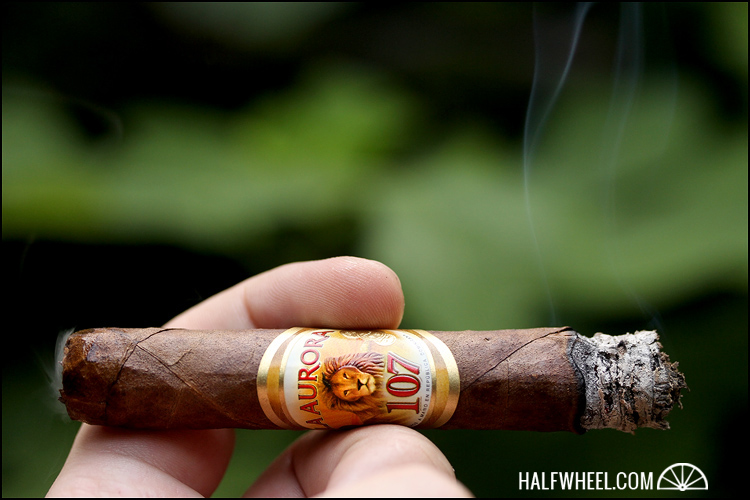 Construction-wise, little has changed from October of 2010. Tons of relatively thick smoke. An ash that will hold on for two inches if you nurse it, but seems much more comfortable layering in inch long chunks. Much like last June, the body is quite full with a strength more around the medium-full levels, still a bit more kick than most of La Aurora’s current offerings.

The Bottom Line: Up until about September of 2011 I was smoking La Aurora 107 Lanceros on a weekly basis. I still have a box and a half or so left and I’m not sure how I feel about them, particularly in its current state. Let’s be clear—this cigar was never better than the 107 Corona in my opinion, but now it’s a lot different and a lot less stellar than it was a year ago. As we seemingly so often say, it would have been great if the cigar had been like the initial puffs for the entirety of the cigar. Unfortunately, it changed and the complexity was noticeably affected. Still, the strength, flavor and body levels suggest there is a lot more left in the cigar, which is a good thing—particularly since I have about 30 of them left.