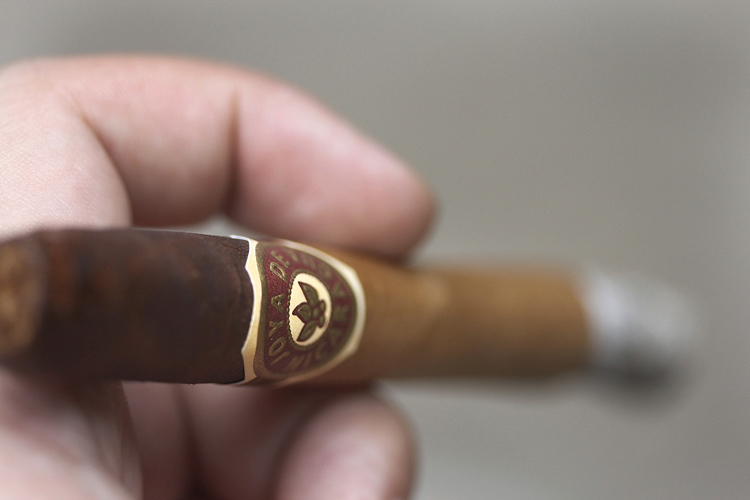 I still believe the Joya de Nicaragua Cabinetta Serie No. 13 (Lancero) was one of the quietest releases of 2010. When I reviewed last June as part of Lancero50 — most had never heard of the fifth size of Cabinetta, since then, things have changed a bit. Actually a lot has changed.

Here’s what I said last June:

I had completely forgotten about the Cabinetta. I smoked them when they first came out and hadn’t really touched them since, which is a shame. The Cabinetta Lancero is definitely going to benefit from a bit of rest, and likely a bit of proper age as well, but these are good to go now. A great change of pace for those that love the heavy Nicaraguan profile, but more so a good cigar. I will go out on a limb here and say that at some points, the Cabinetta No.13 is more “Liga” than either of the Liga Privada Lanceros (EV-10 & L40) I’ve smoked. To me, both of them missed the core Liga flavor (cedar, spice and cocoa), which the Cabinetta has. Don’t get me wrong, the depth levels between this and a Liga Privada aren’t comparable, but at times there are some similarities going on here.

One of the many reasons why we do reduxes is to gauge how cigars, particularly new ones, change as they sit in our humidors. I can tell you before even lighting up this one for the redux — things changed.

Color-wise, the Cabinetta Lancero remains unchanged. The Nicaraguan Criollo has a great deep coffee hue in contrast to the mustard color of the Ecuadorian Shade wrapper. Aroma-wise, a year in cellophane produces much stronger aged tobacco note, although there’s still some nuts and herbs from the Joya.

It starts with a bit of toastiness and cedar, close to full, but a much more mature of flavors. Eventually, things turn a bit grassy with the hay still around, now joined by pepper. As is expected, as the final third enters, the flavors change completely. A much stronger pepper and sweetness, definitely a more Nicaraguan version after a year in the humidor, although the cocoa misses. Joya de Nicaragua is not known as the epitome of great construction in the industry and there are definitely some examples (Antano Lancero) of where one is right to be skeptical. However, as far as this Lancero goes — Joya is getting it right. Smoke production is excellent and draw although not entirely consistent, is acceptable, albeit on the loose side. Strength-wise, this is now topping out in the medium range.

A few things. Firstly, the production L40s taste a lot more Liga-like than the prototypes did, particularly compared to the EV-10/L38. Second, the addition of José Blanco means Joya de Nicaragua's small ring gauge portfolio is likely to expand a lot. It's not just a matter of José's personal taste, but also Joya's attempt to capture many of José's fans, who tend to enjoy Coronas and Lanceros than Gordos and Super Gordos. Thirdly, I wonder if Joya is going to see the Ecuadorian wrapper on this decline, 2011 produced some absolutely beautiful cigars. But, onto the important things. This is the Lancero to pair with your morning coffee. One could make a case for the Don Carlos (too limited), La Auroras offerings (discontinued) or perhaps even the Davidoff offerings (a bit pricy) — but for me, the winner is easy. A year has changed this cigar dramatically, which might confuse given the score is nearly identical. I believe today the cigar has a more defined role than it had when it debuted. So, more limited, i.e. definitively a mild to medium cigar, but I think it performs better at this task.