Sold exclusively through New Havana Cigars back in 2008, the Illusione ~eccj~ was released to commemorate the 15th anniversary of the European Cigar Cult Journal magazine, now known simply as Cigar Journal. Only 300 boxes of 15  were sold of a special 5 5/8 x 46 Corona Gorda with tobacco all from Nicaragua.

Here is what I said back in my original review in April of 2010:

The Illusione ~eccj~ was a fairly complex smoke from start to finish, with the flavors changing quite a bit. Medium and sweeter in the beginning, and spicy woody at the end with a bit of leather at the very end for good measure. The draw was excellent for the whole stick, and there were copious amounts of smoke, which I always love. This is a prime example of a great cigar, one that should age extremely well, and while it had the obvious presence of classic Illusione profile, it had that little bit extra that pushed it over the top for me. I think that after smoking two of them (I smoked one last night as well), I do prefer the ~eccj~ to the Epernay line, but not by a huge amount. Unfortunately, the only problem I had with the cigar was the burn, but even that was more annoying then horrible. A great example of an excellent cigar that everyone should try at least once, if they can.

While the ~eccj~ was formally only released once, the blend was reintroduced as the Illusione Epernay years later.

The ~eccj~ is not the prettiest cigar in the world with a medium red mocha brown wrapper that is smooth to the touch, but exhibits quite a few bumps up and down its length. It has the perfect amount of resistance when squeezed, the triple cap is expertly applied and there is even just a touch of oil still present. The aroma off the wrapper is slight cedar, sweet nutmeg, leather and white pepper.

The Illusione starts off with strong flavors of creamy cedar, leather, coca and earth. There is a wonderful caramel sweetness that intertwines with the perfect amount of white pepper on the retrohale, both of which are consistent from the first puff to the last. The second half sees an increase in the strength and just a touch of bitterness underneath the other flavors, but it just increases the enjoyment of the profile, as opposed to detracting from it. The creamy cedar and caramel notes dominate the entire cigar, but the other flavors were just strong enough to enhance the enjoyment without taking anything away. 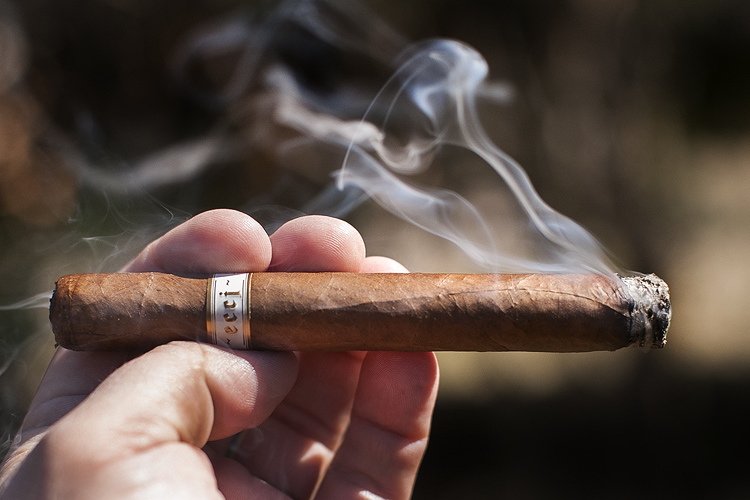 Construction-wise, the burn and draw are both excellent for the entire cigar—never giving me anything close to an issue—and the smoke production is way above normal. The burn has really improved from the first time I smoked it almost three years ago. The ash is a dirty gray color, and is extremely well formed, but does not stay on for more than three-quarters of an inch before falling. Overall strength is a non factor, starting out well below medium and ending just barely in the medium range.

This is an excellent example of how well the best Illusione cigars age. While the ~eccj~ has lost a bit of strength in the five years since its release, it more than makes up for it in balance and nuance in the profile. Construction is excellent, and the better than average smoke production is a nice addition. While I am not going to say these have many years still before they start on a downward slope, they are still smoking excellently now and I expect that to continue for the foreseeable future. One of Dion Gioloto's best releases and I really wish I had more of them.