Habanos S.A.’s Edición Limitada program has been well documented since launching in 2000, evolving into its current format of a trio of cigars launched annually that uses tobacco aged for two years to create a limited production of cigars that often come at a sizable markup from the marca’s regular production cigars.

As has become standard, 2011 saw not only this Hoyo de Monterrey offering, but the Cohiba 1966 and Ramón Allones Allones Extra, all released in the second half of the year. The Short Hoyo Pirámides was the sixth cigar from the marca to be part of the Edición Limitada program and the first since 2007.

Here is what I said in my original review from March of 2012:

While the Cohiba 1966 has gotten the bulk of the attention so far, there is a lot to love about the Hoyo de Monterrey Short Hoyo Pirámides Edición Limitada 2011. The pepper in the second third is a bit surprising given the sales pitch of being a cigar for newbies and fans of mild cigars, yet it’s also a fitting introduction to the flavor range that a great cigar can put forth. The salty start is a bit of a turnoff, and I could see it being a turnoff for those newbies, but sticking with it pays great dividends in terms of flavor and complexity. I hate to think of these going through a sick period and losing some of the great flavors that are present right now, but the thought of what these will evolve into with time is also very appealing. The only remaining issue is the price. These are about $2.00 per cigar more than the 7 3/5 x 49 Double Corona, making for an interesting comparison of two cigars I really like. It’s hard to say I‘d go wrong with either one, but it’s hard to also overlook that I’d get a lot more cigar for my money with the Double Corona. Either way, both will have a spot in my humidor for some time.

The Hoyo de Monterrey Short Hoyo Pirámides Edición Limitada 2011 isn’t the most attractive cigar you’ll find on the market with a leathery, earthy brown wrapper that has a decent amount of veins. It’s surprisingly fragrant and floral on the foot with some sweet wood and a bit of spice, while the cold draw is spot on and has a cooling menthol note with a bit of mint and wood backing it up.

There’s no delay in getting flavor from the cigar, as the first puffs are rich and concentrated, like sampling the gravy before trying the meat. It thins down a bit in the first inch, adding a bit of airiness to dilute it to a medium-bodied smoke with only the faintest hint of spice. The smoke picks up a honey-like sweetness in the first inch as it wafts through the air, showing early that the cigar has a good amount to offer. The flavor stays fairly consistent into the second third, with a building note of graham cracker taking over and bringing in just a touch of sweetness. The ambient smoke gets back some of its body right at the midway point, with some earthiness and mineral notes providing both fullness and brightness. The final third gets is fairly nondescript as it picks up an overall robustness that takes on a bit of a coffee note, with the spice remaining a non-factor in the overall flavor. 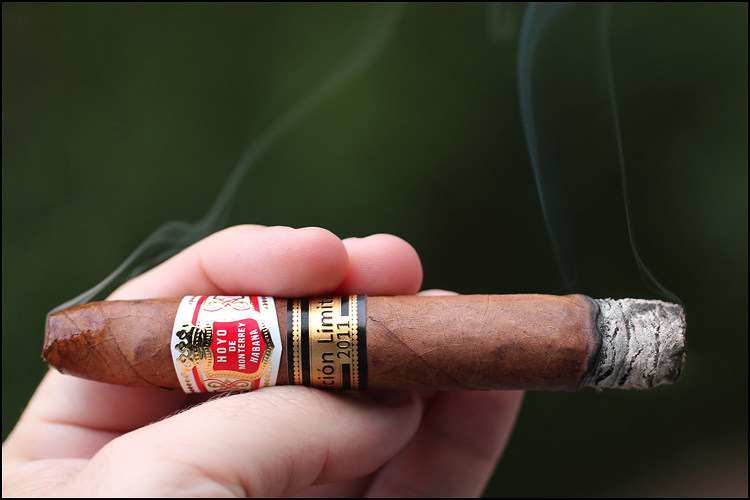 There were no burn issues or technical issues to report, other than the bands being a bit loose and sliding around a fair amount. The smoke volume was just below ideal for me, lacking at times in amount but by no means in flavor or aroma. While it starts and finishes at a hearty medium, the bulk of the cigar is spend at a medium-minus, loaded with complexity and subtleness and giving both the nose and palate a treat.

If there's one thing that has happened to the Hoyo de Monterrey Short Hoyo Pirámides in the eight months or so since I first smoked it is that has gotten a tick mellower, most notably with the pepper bomb no longer present and the overall intensity of the flavors dialed back just a bit. The smoke is still as aromatic and absolutely wonderful as I remember it, and the flavor complexity is as good as ever with marked changes happening on a fairly regular basis throughout its entire length. Seeing how well this has held up makes me want to get some more, but as mentioned in the original review, the price is still the sticking point, as it's $2 more per stick than the very enjoyable Double Corona and for significantly less cigar. But if you have the chance to try these and don't mind paying a bit of a premium, I don't think you'll be disappointed.