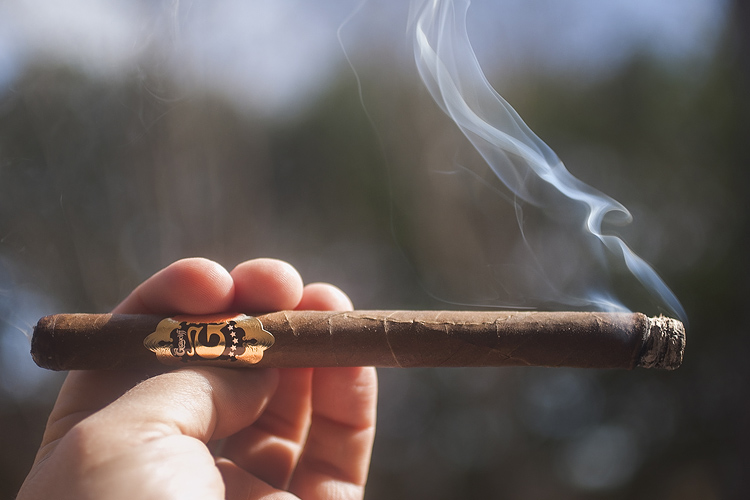 Released in late 2003, Graycliff’s Espresso line of cigars became their fullest bodied blend in the entire brand. Originally blended by the creator of the original Cuban Cohiba, Avelino Lara, and Graycliff’s Enrico Garzaroli, the Espresso line is rolled at the Graycliff factory in Nassau, Bahamas. While there are at least nine different vitolas in the Espresso lineup, the Elegante is one size that is produced in such small quantities that very few people even know they exist.

Here is what I said in my original review back in February of 2011:

Honestly, while I was expecting this cigar to be good, (I have read a few reviews of this particular vitola), I was a bit surprised at how much I enjoyed it…While not the strongest cigar (nor is it meant to be), the flavors that were present were distinct, complex and almost perfectly balanced…Add in the great burn and draw, and this is a winner all around…The best Graycliff I have smoked BY FAR, and I would not hesitate to pick up more (even at the somewhat inflated prices they command).

The Elegante is not the best looking cigar with a medium brown wrapper covered in overt veins running up and down its length although still smooth to the touch. While the pigtail is a nice touch, the cigar is a bit spongy when squeezed. The aroma from the wrapper is a combination of barnyard, earth, oak and slight pepper.

The Graycliff Espresso Elegante starts out strong with flavors of aged wood, earth, espresso beans, chocolate and hints of leather. Everything continues that way until about the end of the first third, when the profile changes almost totally and a very strong sweet floral note takes over combined with some fairly strong coffee notes. It makes for a very interesting profile almost like eating chocolate covered flower petals—or at least, what I image that would taste like, since I have never eaten anything like that. The combination of flavors continues to increase in strength throughout the second third and into the final third, where it starts to recede a bit. allowing other notes of espresso, earth and cinnamon to creep in. Construction-wise—both the burn and draw are spot on for the entire smoke—and while I touched up the burn a bit, it was never bad enough to affect the smoking experience. The overall strength starts out at just below medium, increases to a solid medium by the halfway point and stays there until the end of the cigar. The final smoking time was right at one hour and 20 minutes.

I am fairly astounded by the differences of the flavors in the profile of this cigar in just two years time. While there were some floral notes in the cigar when I smoked it the first time, the strength of the flavors surprised me quite a bit. I have written before that these days, more and more I am looking for cigars with unique flavor combinations and this cigar has it in spades at this point in its life. Having said that, this is not the strongest cigar in the world, and you really need to put your whole attention on it to get the most out of it. Well worth picking up—and after seeing the difference in two years time—and I really looking forward to how these change in the future.