Back in May of 2012 I reviewed the My Father S Special, a cigar that is only given out with box purchases at My Father events. The S Special comes in cardboard three-packs and is only made in a 5 x 50 Robusto vitola. It is rumored to be blended to taste similar to the El Centurion blend, which was Pepín García’s much loved first limited edition in 2006.

Here is what I said in my original review back in May 2012:

I was pretty impressed with this blend, whatever it may be. Although a milder cigar strength-wise, the flavors were distinct, balanced and fairly interesting with a nice amount of spice throughout. While not as good as my gold standard mild smoke , the Tatuaje WCD 120 Redux, it is an ideal morning smoke. The problems, as they always seems to be are two-fold: you are only supposed to be able to pick some up at events, after buying a box, and the one place that sells them prices a Robusto at $8.00 each. In my opinion, they are definitely worth picking up if you come across one.

The cigar seems extremely well-constructed with a honey brown wrapper that is dry to the touch, but also silky smooth. There are a few veins present, but they are not overly distracting, and the cigar has a very nice heft to it. The aroma from the wrapper smells strongly of dark chocolate, barnyard and cedar.

The S Special starts out with great flavors of creamy cedar, nuts, earth, and leather. There is some great black pepper on the retrohale and nice spice on the lips, and that continues for the entirety of the smoke. It’s very creamy overall. While the profile does not change much for the length of the cigar, the flavors are extremely enjoyable and quite distinct. 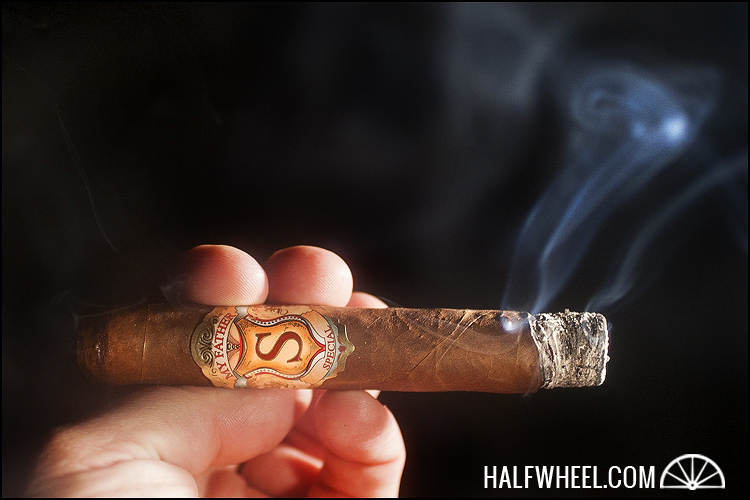 From the first puff to the last, the construction—both burn and draw—is excellent for the entire cigar. The smoke production is also well above average. Overall strength remains at a constant—solid medium—for the entire cigar, never even coming close to the full mark.

While not the most complex of blends, this is a very good cigar from start to the finish with excellent flavors, medium body and solidly medium strength. A great anytime cigar, good in the morning or at night. In terms of changes from May when I first reviewed it, this is essentially the same smoke with pretty much the same flavors, profile and strength. I think the profile overall is a bit creamier, but not enough to really impact the cigar more then a little compared to seven months ago. A very good cigar then and a very good cigar now; one that you should definitely try if you run across them.