If you had told me last March that a $9.50 petit corona was going to the Consensus cigar of the year, I would have told you that you were full of it. Yet, when all was said and done, the 4.44 x 44 cigar from Ezra Zion took that honor.

The company’s first limited edition shipped last April. It’s a joint effort between Casa Fernández Nicaragua and Miami-based operations with the tobacco with the final steps, including applying the wrapper and packaging taking place in the U.S.

I smoked samples that were probably more preproduction than prerelease, as they had not been fully aged like the production samples, but I still liked the flavors.

There are two problem Ezra Zion will face with Tantrum: price and how soft the cigars are. While both could change, the latter seems more likely. While there were issues with tunneling—the draw and smoke production were both excellent and far from concerning. That being said, if I walked into a shop and picked up a cigar this soft, I’d have some questions. None of Ezra Zion’s releases have been particularly in the value range, albeit, none are tougher pills to swallow than the $9.50 price for a 4.44 x 44. All that being said, this is a good cigar. There are three defined and enjoyable profiles that combine for a harmony that a lot of cigars fail to achieve. I think the price is perfectly acceptable for what the cigar gives you, even in it’s small form, but it won’t be surprising to me when many turn down an opportunity to smoke just one because of the aforementioned concerns.

That being said, the cigars I smoked at the event were not impressive. In fact, they were bad enough I didn’t finish the cigar. The bands help the Tantrum look a lot better, not that there was anything wrong with the AGANORSA wrapper. Thanks to a lack of cellophane, I’m not able to detect much aroma, but there’s a hint of some aging room notes, i.e., harshness. There’s a strong concentrated notes of grass, hay, lemon and some acidic white wine on the cold draw, all along some more generic tobacco flavors.

Soft cedar coats the palate on the first draw before a refined nutty finish takes over. I get some saltiness on the lips and toastiness notes after the smoke has long left. The star of the show is the retrohale through the first and second third: pure chocolate chip. There’s some sourness on the tongue, but it’s rather secondary compared to the cedar and nuttiness. Towards the middle, I get some generic barbecue notes as whatever pepper was present at the beginning is gone. As the second third ends, I do get a touch of harshness, hardly what I found before. 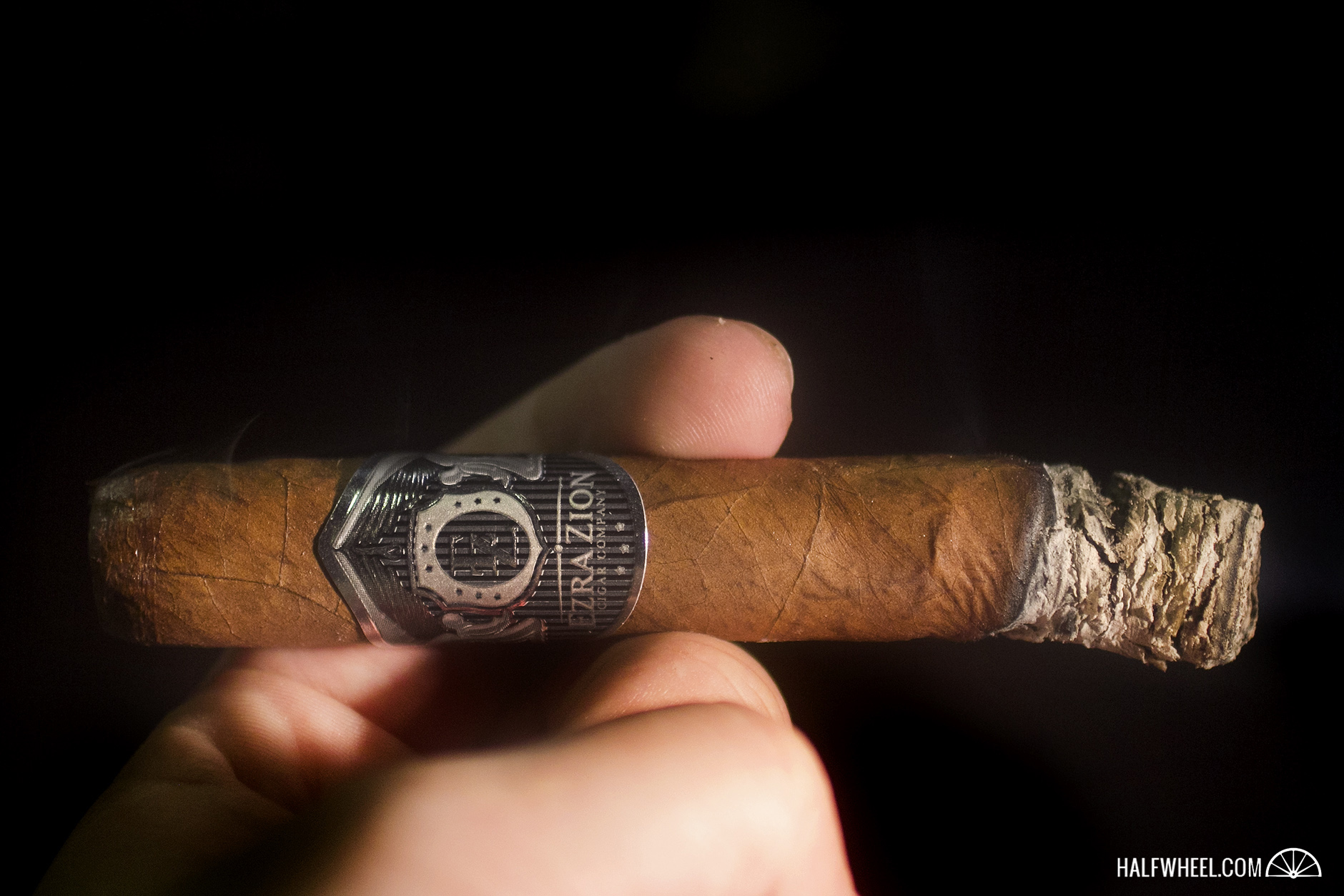 While the flavor of the Ezra Zion Tantrum has improved a lot, the construction shows some similar issue. Notably, tunneling towards the middle of my hour-long smoking time. Draw is good, smoke is pouring from the cigar, but the burn requires some attention. Strength is medium-full, not sharp, but still heavy enough.

Ezra Zion is a site sponsor.

I had hoped for more in this cigar. After nearly one year, the Tantrum is a good cigar, it’s just not a great cigar. I had hoped that there would be a dynamic profile with contrasting richness. The Tantrum is not that. It is however a cigar with developed flavors and some construction issues. Ultimately, the issue is hardly flavor or construction, it’s all about price. There are still cigars to be found on shelves and I imagine if it was $4.44, not $9.50 that would not be the case. Good cigar, bad price.