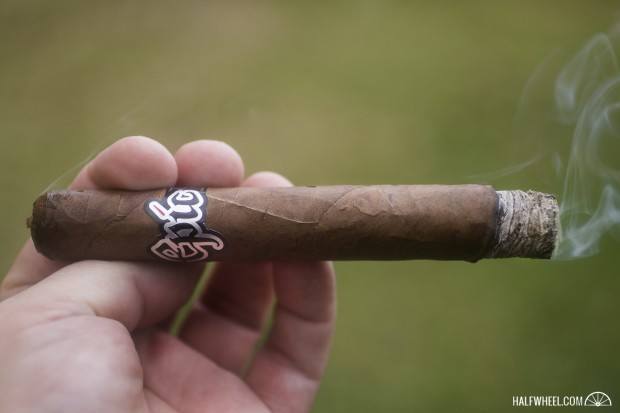 In February 2014, Epic Cigars officially launched with two different lines, the Corojo Reserva incorporating a Ecuadorian corojo wrapper and the Maduro Reserva which uses a Brazilian ariparaca. Internally, the two blends are the same, using a Dominican olor binder along with fillers of Dominican piloto cubano, deco and ligero. Shortly after the launch, the blend of the Maduro Reserva line was changed, swapping out the Dominican olor binder for a Cameroon binder and adding some Nicaraguan viso into the filler. In addition, Epic added a Habano line in June 2014 incorporating a habano wrapper from Ecuador and a slightly revised internal blend.

Epic’s Dean Parsons had this to say about his company’s origins.

Back in 2010 while in the DR I began to research .com’s and trademark names related to cigars. Although there were alot (sic) of cigar related .com’s available, upon researching the names trademark I found that many of the names had been registered. I would sit on the beach for hours and purchase different .com’s.

One afternoon I was with a friend from Miami enjoying a cigar on the beach of the North Coast. As I was watching kite boarders race across the water I though of a friend of mine “Dimitri” who owns Epic Kiteboarding. I immediately searched on Go Daddy for the name using my iphone and it was available. The next day I bought 20-30 other related .com’s for Epic Cigars. A few weeks later I began the process of trademarking Epic cigars in the USA. I believed then as I do now that it was a name of Epic proportions. The easy part was done. Now it was time to start creating cigar blends.

Here is what I said back in my original review of the Epic Corojo Double Corona in February 2014:

Having heard very little about the Epic Cigars brand before I smoked the samples for this review, I have to say I was fairly impressed with what I ended up with. The Corojo Reserva is extremely smooth, has distinct flavors and exhibits excellent construction from beginning to end. I loved the ever morphing sweetness, and the creaminess in the profile only adds to the complexity. A wonderful under the radar smoke that is priced extremely competitively that I think will surprise people if they try it.

Visually, the Epic Corojo Double Corona is covered in a reddish mocha brown wrapper that looks like it was dipped in oil and is silky smooth to the touch. There are a multitude of very prominent veins running up and down the length of the cigar, and it is quite spongy when squeezed. Aroma from the wrapper is a combination of creamy nuts, earth, leather, manure and sweet raisins, while the cold draw brings flavors of spicy leather, cedar, cinnamon and dark cocoa.

The Epic Corojo Double Corona starts off with some fairly significant spicy leather as the dominant note, along with other flavors of dark chocolate, bitter espresso, cinnamon, hay, earth and a touch of anise. There is some slight black pepper on the retrohale, and some spice on my tongue, but neither are overtly strong, and neither do much to affect the overall profile. The finish features both a slight floral sweetness as well as a slight bitterness, both of which don’t seem to be much getting stronger as the cigar progresses.

The second half has less sweetness on both the finish and retrohale, but the profile has become noticeably more creamy overall. While the dominant flavor has shifted a bit to more of a meaty, earthy note, the leather that was so strong in the first half is still a major player. Other flavors of espresso bean, oak, powdery cocoa, creamy nuts, cinnamon and hay flit in and out, and the black pepper on the retrohale has increased quite a bit, and continues to do so until the end of the cigar.

Construction-wise, the Epic Corojo Double Corona features an excellent draw throughout, and a burn line that needs touching up a few times, but not enough to be more than mildly annoying. Smoke production is dense an copious for the entire cigar and the overall strength increases steadily from a strong mild to end a solid medium by the time I put the nub down with less than an inch left.

I enjoyed the hell out of the Epic Corojo Double Corona the first time I reviewed it, but this is a somewhat different cigar. While not totally missing, the strong shifting sweetness is significantly reduced compared to when it was fresh, leading to a much less complex profile overall. The construction was about the same as the first time I smoked it, featuring an excellent draw—despite how spongy it was when squeezed—and a burn line that wavered back and forth a bit. While still an enjoyable cigar, I definitely preferred this particular combination of blend and vitola when it was fresh a bit more.