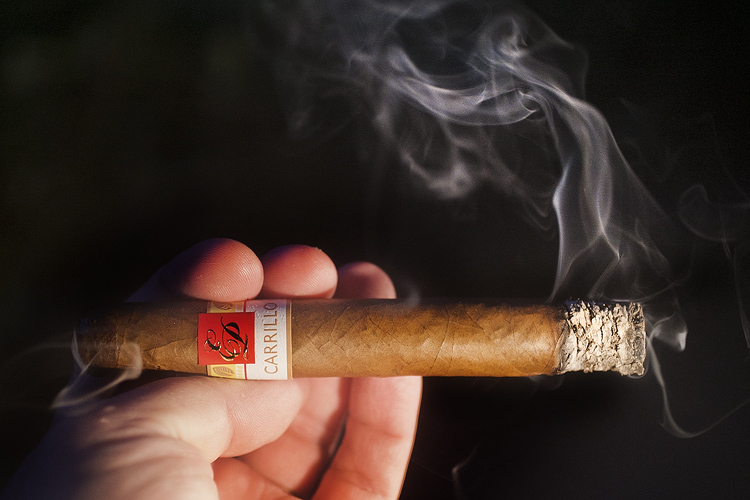 Back in March of 2011, E.P. Carrillo put his entry into the ever-fluid marketplace that is Connecticut-wrapped cigars, the E.P. Carrillo New Wave Connecticut. While it was originally released in three vitolas, a fourth has since been added.

E.P. Carrillo absolutely nailed this blend. I have been disappointed in the recent lackluster Connecticut releases by various manufacturers who seem to sacrifice complexity in the name of mildness, but the New Wave Connecticut has an almost perfect combination of creaminess, sweetness and spice with great, easily discernible flavors that change from one puff to the next as the smoke progresses. Throw in the price and you have an instant classic on your hands. Of course, you have to actually like Connecticut wrappers in the first place. I have a feeling this will be one of the sleeper hits of the year, and will be getting a box immediately upon their release.

The E.P. Carrillo New Wave Connecticut Divinos is a gorgeous example of a cigar with a honey brown wrapper that has almost no oil at all present, but is smooth to the touch. The cigar has the perfect amount of give when squeezed and seems to be perfectly rolled. The box press that was evident when I first reviewed it is largely missing. Aroma off of the wrapper is a combination of strong, sweet raisin and cedar scent that actually seems stronger than back in 2011.

The New Wave Connecticut starts out exactly as it smells, with strong and distinct flavors of sweet raisin, honey, cedar and a wonderful amount of black pepper on the retrohale. Flavors remain roughly the same until about the halfway point, when notes of earth and nuts start to fade in and out—although they are never strong enough to fight for dominance. The pepper remains in the profile for the whole cigar, but the strength starts to fade as the cigar burns to the end. Although the draw is just a tad bit too loose for my tastes, it is not so bad that it affects the smoking experience negatively and the burn is excellent for the entire smoke. There is a copious amount of smoke that comes from this cigar as well with an aroma of pepper and wood. The strength starts out at a very mild medium — and while it does get stronger — it only ends the cigar at just below medium.

The Bottom Line: One of the biggest questions about milder cigars is how do they age? Well, I can assure you that with the E.P. Carrillo New Wave Connecticut, there is no issue. The sample I smoked for this redux was from the same box that I procured on the initial release in March of 2011, so it has more than 18 months of age on it. The profile is — if anything — even more balanced and a bit stronger than when I first reviewed it: a wonderful combination of sweet fruit, cedar and black pepper, along with nuts and earth at various points. The finish is excellent and the construction is wonderful. While not overly complex profile-wise, this cigar remains my perfect morning smoke with wonderful flavors, a great price point and just enough strength and pepper to keep me interested.