Today we’re going to take a look back at the E.P. Carrillo Atlantic Cigar 15th Anniversary cigar I reviewed back in June 2012. The E.P. Carrillo was the third of four limited edition cigars from four different manufacturers that Atlantic Cigar Co. released between November 2011 and October 2012. These cigars were released over the course of a year in celebration of 15 years of business. These were the four cigars released:

Out of all four of these, site sponsor Atlantic Cigar Co. appears out of boxes, but has around 30 samplers of each release left.

This is one of the redux reviews I’ve been looking forward to doing for a long time. If you remember from my final notes section of the original review, I mentioned that these cigars had been shipped to Atlantic very wet. Atlantic took delivery of these cigars and kept them in the store for a couple of months before they even felt comfortable enough to offer them for sale. In fact, they were even hesitant to ship us any of them to do a prerelease review. I had the cigars in my possession for three weeks before I reviewed it, letting them acclimate to my humidor and then dry boxing the samples I smoked for a day before the actual review. Even after all that, I still think that the flavors were ill-affected by the condition they were in. After almost a year in my humidor however I’m going to say they should be nicely acclimated and I’m looking forward to seeing what changes that brings.

Not much has changed in the look of the cigar. The Brazilian wrapper is still slightly rough and just a little oily to the touch. The wrapper aroma has changed into more of a barnyard aroma though that distinct milk chocolate note is still there off the foot. The cold draw brings more of the milk chocolate, though the spice from a year ago is virtually gone and instead has a dried fruit note in it’s place.

The beginning still packs the punch of milk chocolate that I found so unique about this cigar. There’s still an interesting woodsy note mixed in along with the slightest bit of ginger. The second third brings a meaty char to the profile, which along with the wood and milk chocolate we almost have a campfire roast complete with hot dogs and s’mores. As before the only peppery spice I’m picking up is slight and in the background. The final third has forgotten most of the earlier flavors and has developed into a profile dominated by cocoa, cinnamon, and hints of coffee. A very unique change, though one that I can say is quite enjoyable. 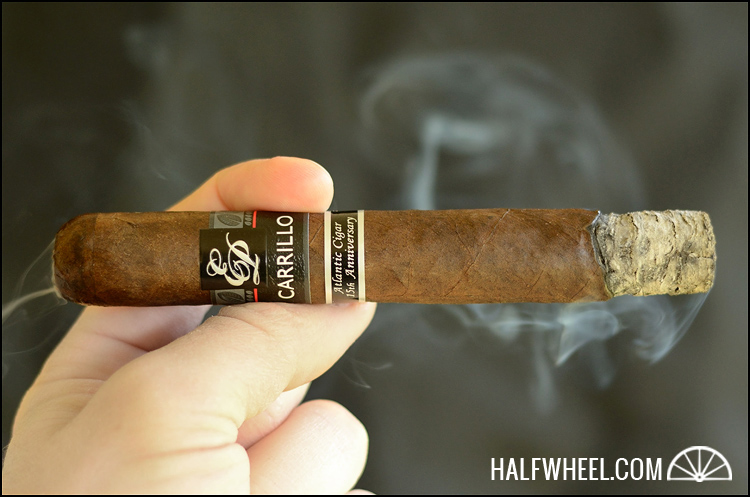 The construction of the cigar still shines with a perfect draw, plenty of smoke production and a very solid light gray ash that holds well over an inch. The medium-plus strength hasn’t waned any in the past year though the body of the cigar has become slightly more robust.

It’s amazing how much a year can change a cigar. While the original review noted some good flavors, there were only a few, they were muted and the profile never really went anywhere. Now we start out with those flavors shining and developing into a completely different profile in the final third than the first. The flavors never clashed and the cigar was enjoyable and entertaining. While this cigar might have had a slightly rocky start when released, it has become a solid smoke that I’m looking forward to enjoying more of.