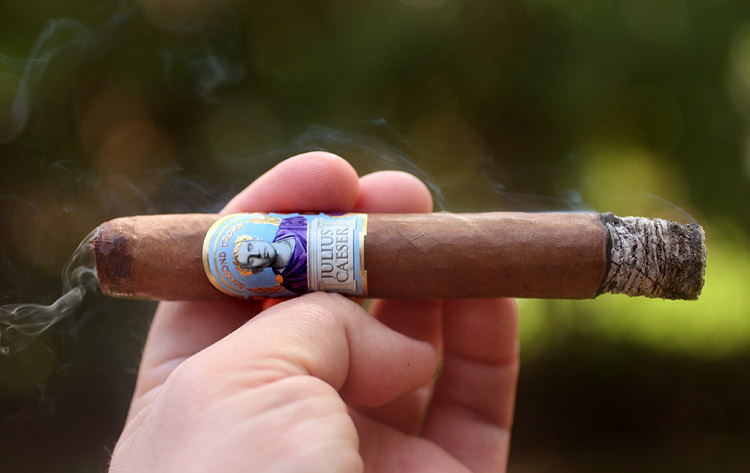 First introduced at the IPCPR Convention & Trade Show in 2009, but not actually released until mid-2010, the Diamond Crown Julius Caeser is named and produced in honor of the company’s founder, Julius Caeser Newman. There were some problems with some of the early samples and it was later learned that several thousand had to be destroyed. Interestingly, descriptions of the cigars released in 2010 listed the binder and filler as being comprised of Dominican leaf, while the information on the more current releases indicates the cigars blend is comprised of “a robust blend of Central American tobaccos.”

Here is what I said in the original review back in February of 2010:

There is really not that much that has not already been said above. This was a too large, too mild and too boring cigar that was never came close to being anything other then average and I am sure it will be overpriced as well.

The Diamond Crown Julius Caeser looks impeccably rolled with a great triple cap and a slightly oily reddish brown wrapper that is smooth like wax to the touch. It is hefty when held in the hand and has the ideal amount of give when squeezed. The cigar has an obvious box press, something I don’t remember the first samples having, and the wrapper smells strongly of raisins, cedar, pepper and chocolate.

The Diamond Crown Julius Caeser starts out creamy with immediate flavors of cedar, leather, bitter espresso and earth. There is a almost perfect amount of spice on the lips that sticks around for about 20 puffs, then starts to recede quickly into the background. The draw is great, and the burn, while a bit wavy at times, is not bad enough to actually have to correct. Strength is almost non-existent through the first half, I would call it a mild medium, but it does seem to be increasing. 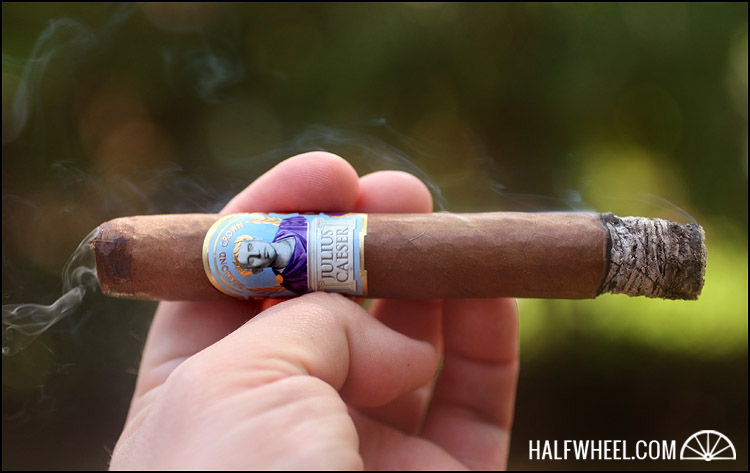 The profile remains creamy for the entire first half, then shifts abruptly sweeter with a very strong raisin note taking center stage. Other flavors remain pretty much the same, with cedar, earth and leather taking to top spots. Construction gets better with the draw remaining perfect and the burn becoming perfect until the end of the cigar. The strength increases a bit as well, but never even hints that it will go over mild medium.

I mentioned in my first review of the Diamond Crown Julius Caeser that I was a bit surprised at just how average those samples were and that it was possible that they were part of the thrown away group that was mentioned. We will probably never know for sure if it was a problem with just a few thousand samples or the whole blend at that point, although the fact that they changed the blend is a pretty good indication. What I can tell you is that is new version of the Diamond Crown Julius Caeser is miles above the last ones I smoked, better in almost every way: flavors, strength, construction, looks and overall quality, and was in fact, quite a nice smoke in the morning with a nice mug of coffee. Having said that, the band is still atrocious and the price is still very much on the high side, but as an occasional indulgence, it is worth the coin for a milder cigar.