Earlier this year, Quesada Cigars announced two new vitolas to its Casa Magna Domus Magnus II line, both in unique shapes. While the Tiberius, a 6 x 54 cigar with curvature like a Bic lighter, and the Caligula, a box-pressed double perfecto were both overshadowed in the uniqueness department by the Quesada Salomon Press, the looks were not what impressed me regarding the new Domus Magnus IIs.

Here’s what I wrote when I reviewed the Caligula back in March:

It’s not just the nicotine, the body is fuller and the flavors are more intense—enough so that I imagine many who smoke the Domus Magnus II on a regular basis will have a hard time believing it’s the same blend. It’s hard for me to distinguish my preference between the original Domus Magnus and the Caligula—they are both very good examples of a full cigar, but quite different. Whereas one had a quiet strength, the Caligula was in your face from the start, never once trying to hide anything.

I was somewhat curious to see how that boldness would develop and a bit more than six months in seemed like a decent time for a progress report.

Right off the bat, I get a completely different aroma than my original experience with sweet cocoa, burnt nuts and salty pretzel being the detectable notes. From the cold draw I pick up nuts, vanilla, coffee, a green habanero pepper and graham cracker—in short, very little of what I got in March. Once lit, the Caligula starts off very well with a great cedar aroma as well as cedar, roasted nuts and some generic sweetness in the mouth. That remains for much of the first third, with some pizza dough added on the finish and fruits through the nose. For most of the Domus Magnus II, the nuttiness remains the core feature with the second third losing its overt sweetness in favor of creaminess and plenty of saltiness to contrast. Things start to change significantly at the final third. On the positive note, a coffee bean note is added to the mix; on the bad side, the transition features a pungent metallic flavor. 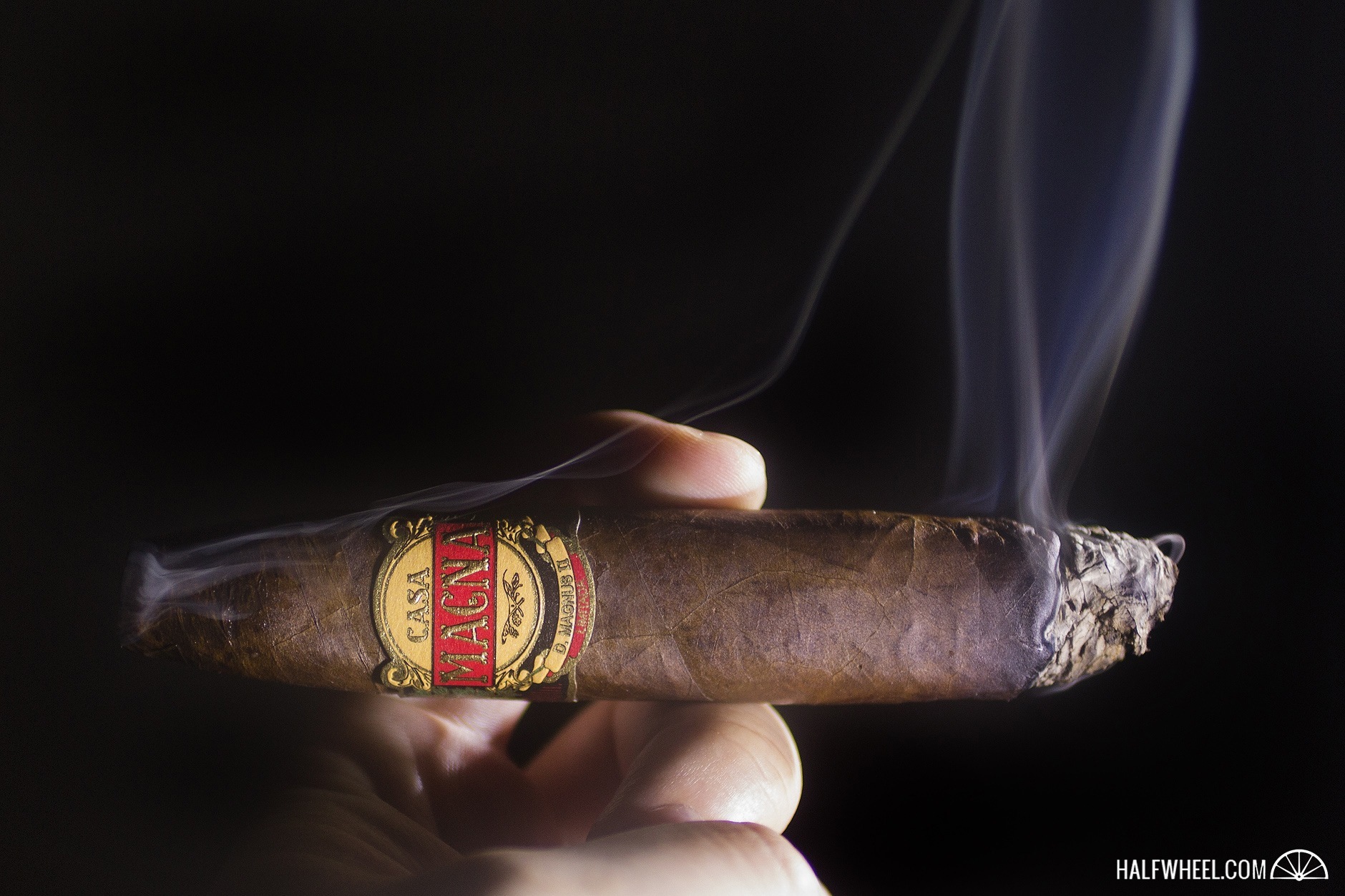 Construction-wise, things are okay, but a bit disappointing. The draw in the first third is somewhat tight, nothing I’m overly concerned with. Yet, by the second third it’s far too open and starts to impact smoke production. A few touch-ups are needed as the cigar burns down, nothing major, but certainly not what I expect given the first few samples I smoked. Strength-wise, I’d peg this at an aggressive medium-full for the first half, full in the second half—still quite strong.

Disclosure: Quesada Cigars is in advertiser on halfwheel. Cigars for this redux were sent by Quesada in March.

I can’t say I’ve ever found the Domus Magnus blend to be one that I would consider a potential aging candidate. Even with the milder original Domus Magnus, it always seemed like a cigar that needed to be smoked somewhat fresh. There was an edge to the cigar, one that is still present, but now much harsher. Detailed flavors still exist in the six-month-old Caligula, but they seem to all want to head on their own paths, never really making much sense of one another. Throw in the metallic flavor, something I can’t say I’ve ever found to be a good thing in a cigar, and the rested Caligula is not what I remembered it to be. The cigar is still full enough that the aging potential exists, although I’m skeptical at the improvement given the results so far.