If you’ve dug into the process of making a cigar, you’ve undoubtedly heard the world pilón, the term for a pile of tobacco that is assembled for the purpose of fermenting the leaves and helping them on their journey from stalk to cigar. They can often be massive creations, standing upwards of four to almost five feet off the ground and weighing upwards of two tons,, using pressure and moisture to create heat and initiate fermentation to remove the undesirable components of tobacco such as ammonia, while helping the tobacco to become smokable and enjoyable.

But not all pilónes are the same, and the techniques for constructing them have evolved over time. In the process of creating the CAO Pilón, part of the brand’s Classic Series, Agustin Garcia and Rick Rodriguez dug into the history books to find a fermentation technique used in Cuba during the 19th century that they found intriguing and thought it could become the basis for their new cigar.

The style of pilón that Garcia and Rodriguez came across is smaller than the ones commonly found in modern day factories; they are smaller in terms of dimensions and are round, while most these days are rectangular. According to General Cigar Co., which owns the CAO brand, there are both positives and negatives to this old-world style: the smaller pilón takes longer to ferment tobacco because it generates less heat, but that longer time is believed to result in a greater reduction of ammonia and sugar content, which improve combustion.

Here’s what I said about the CAO Pilón Robusto when I reviewed it in Sept. 2015:

When consistency from sample to sample is the first thing that comes to mind, I find myself struggling to find the right words to sum up a cigar, and that’s exactly the case with the CAO Pilón. The first cigar was so mild that I barely had any notes written down about it, while the second and third were much more alive and forthcoming with flavors and aromas. I could see each being appealing to different types of smokers, and there was nothing inherently wrong with any of the samples that would warrant steering clear of them. Hopefully if you try this, you find the one that matches up with your palate.

There is an appealing straightforwardness of the CAO Pilón Robusto’s appearance; it feels short in the hand both in comparison to many longer cigars that are on the market and due to the sizable band that is just over an inch-and-a-half long, but the overall presentation works. The accent colors on the band complement the hue of the wrapper almost perfectly and the band’s cream colored background gives it a touch of class on which to convey the cigar’s information. Visually it is near flawless, while the fingers find one soft spot amidst an otherwise firmly rolled form. The cap is applied well, the seams are flat, and there are no prominent veins of which to speak. The foot of the cigar is forthcoming with an abundant sweet cedar aroma and a bit of spice and pepper trailing in the background, while air moves well on the cold draw and drops the sweetness while leaving dry cedar to commingle with peanuts and a straight taste of tobacco.

The CAO Pilón Robusto opens up with a medium-plus profile led by decent amounts of pepper in the nose and on the palate, while a clean and pungent cedar stands out in the aroma. The pepper is the first to evolve, getting sharper in the nose as it takes on a bit of chalk and a profile that leans more white than black, a change that is more about setting up a soon-to-follow respite rather than an overall increase in strength. As the ash builds to well over an inch in length and the burn line begins to threaten the bottom of the band, the profile and smoke both turn softer, leaving the white pepper to a parting note rather than the main one. There’s a slight return to strength approaching the midway point as the pepper continues to evolve, backed by a chorus that includes wood, coffee, mixed nuts and touches of syrupy sweetness. 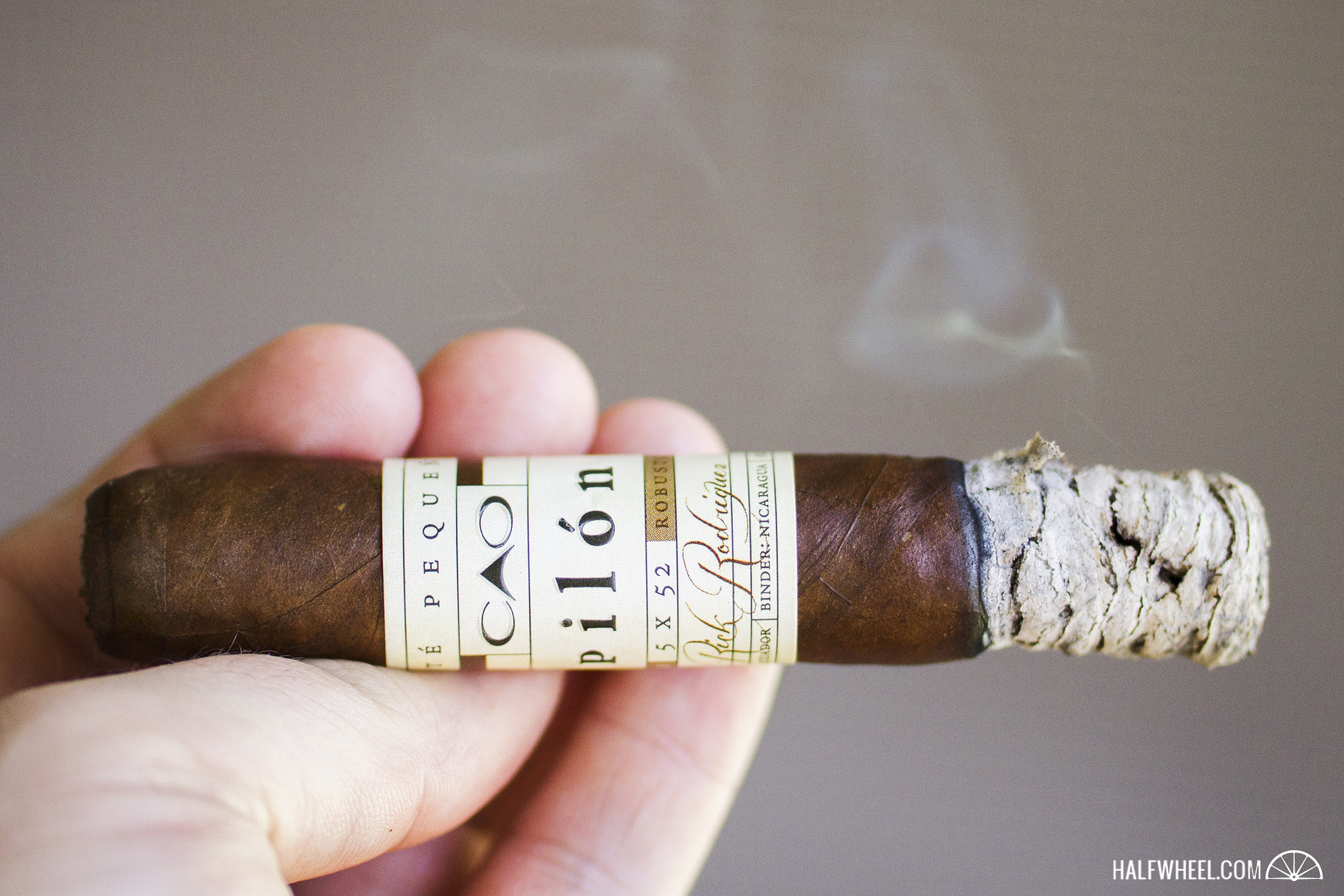 Crossing the midway point, the CAO Pilón Robusto has settled into a very enjoyable profile that has touches of richness and earth while preserving the pepper that has been a constant since the start. It’s not the most complex flavor profile and at times can feel a bit thick and heavy, but it is more than agreeable and has moments where each of the flavors shine brightly. The draw, which has otherwise been outstanding, tightens up just a bit in the final two inches and adds a bit of resistance, but seems to help keep the cigar cool and heat from adversely affecting what is still a very enjoyable profile. The smoke gets a bit thicker and chewier, maintaining the core flavors and staying away from turning bitter until it becomes time to put it down with less than an inch left.

If you read through my notes, it should be no surprise that the CAO Pilón Robusto picked up a few points in the nine or so months it's been since I originally reviewed it, though a lot of that may very well be due to the fact that I only smoked one cigar for this redux and simply got lucky. When this cigar is on, it is quite enjoyable, something that is as true today as it was nine months ago, with good complexity and bright flavor at multiple points and a decent evolution from start to finish. If you have yet to try the CAO Pilón, I'd certainly recommend it; with a bit of luck you may have just as an enjoyable experience as I did.