When you think of cigars, two words that likely don’t immediately come to mind are German and engineering. Cigars are blended, crafted, rolled and so on, but they generally aren’t engineered, and certainly not in Germany.

But when you think of engineering, one word that should almost certainly come to mind is Germany, and a new company called Rauchvergnügen—which translates roughly as smoking pleasure—is bringing German engineering expertise to the art of rolling cigars. The company was founded by a trio of engineers, Joachim aka Joe, Klaas and Oliver.

Their goal, according to a note sent to halfwheel along with the cigars, is to “design a new, precise and exciting flavor that lets use discover nuances every time” by using “nothing but high-quality tobaccos, carefully rolled in the traditional way.” The goal was not just to engineer the form of the cigar, but to engineer its taste. “The result is ultimate precision in aroma, taste, and smoking performance: cigars that are exciting, precise and satisfying down to the smallest details,” the company proclaims on its website.

With a project undertaken in the second half of 2015 and first launched in March 2016, the company debuted with the Rauchvergnügen #42, a name that comes from the volume of the cigar, 42 cubic centimeters. It’s another decidedly unique twist on both a cigar name and something that is rarely considered when talking about a cigar’s size. 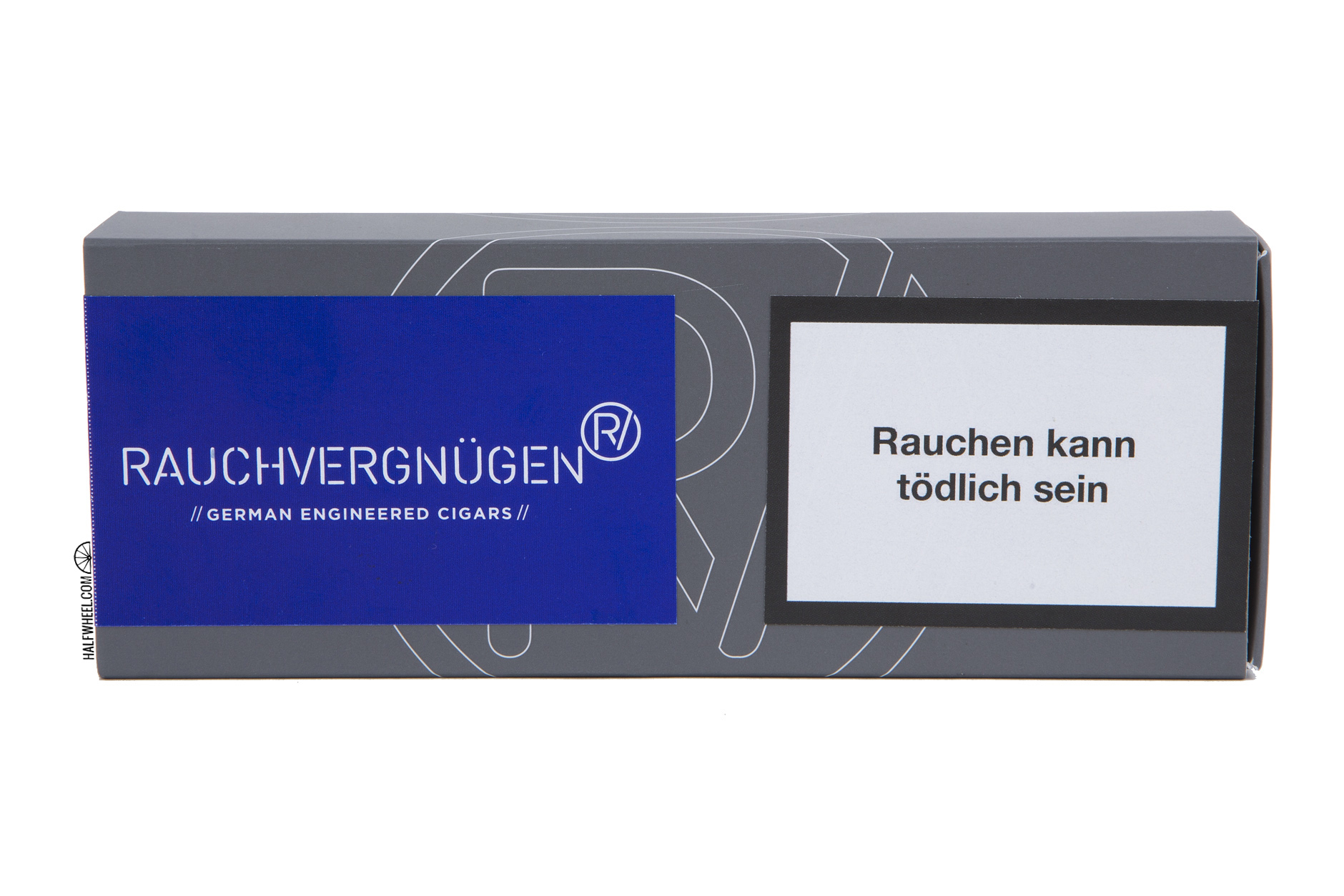 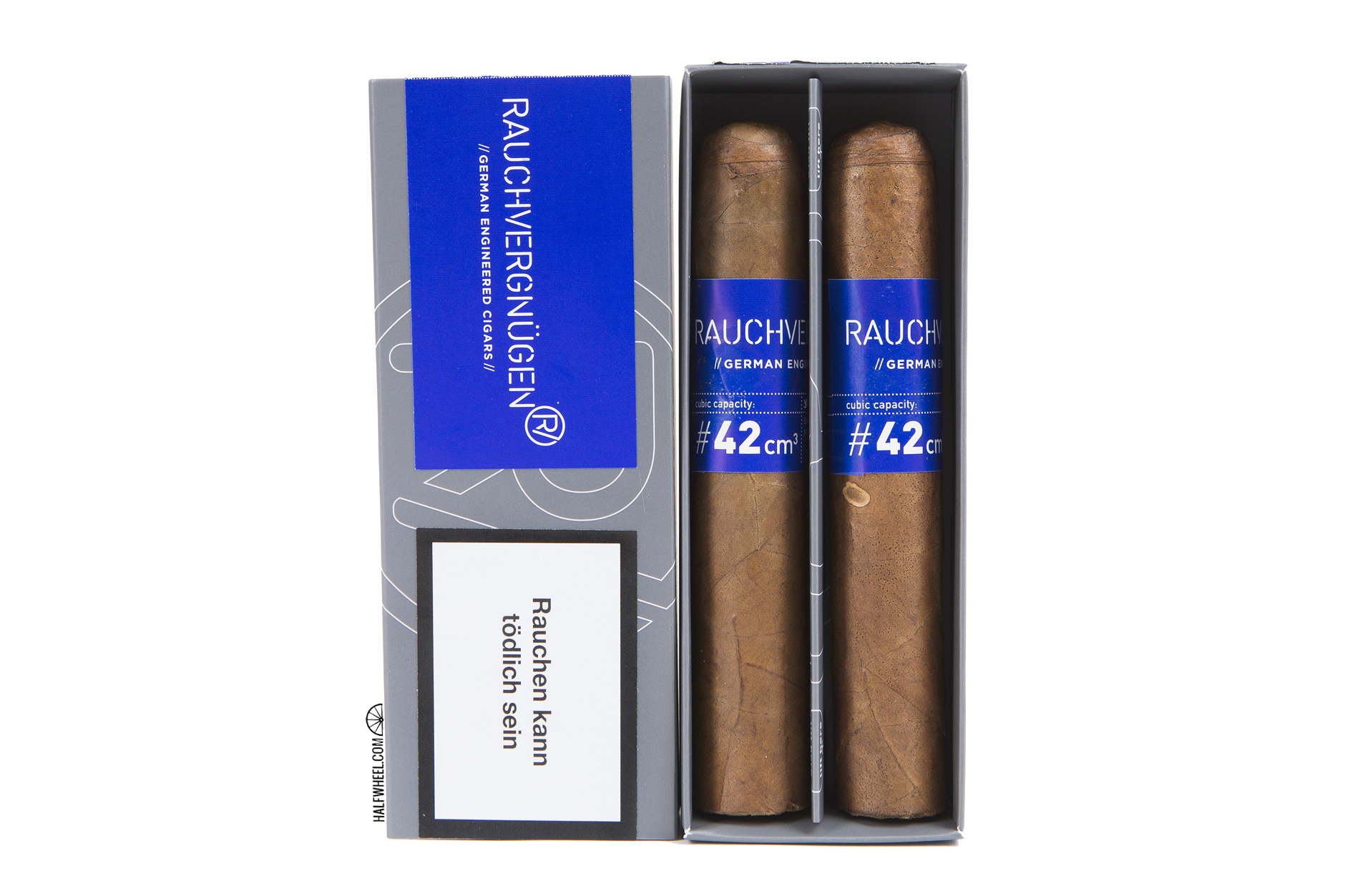 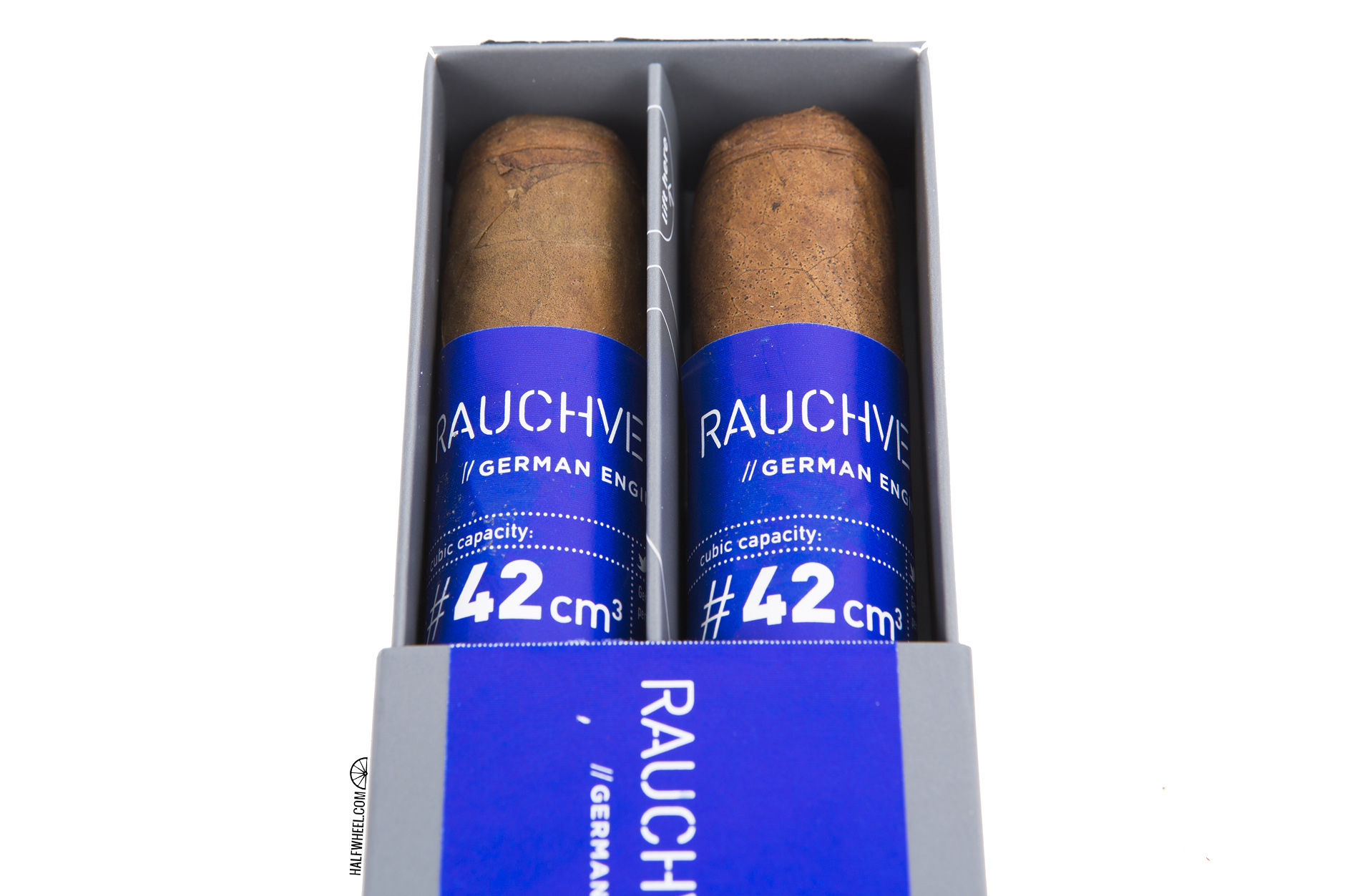 The blend utilizes a hybrid Ecuadorian wrapper, though the company doesn’t offer more specific details than that. Under that capa is a Dominican criollo 98 binder and fillers consisting of Dominican piloto cubano as well as Nicaraguan tobacco and leaves from Pennsylvania.

Only 1,000 of the two-pack slide boxes have been released to this point, which are currently only available through a small number of European retailers, though there are plans to get them on U.S. shelves before the Aug. 8 FDA deadline. 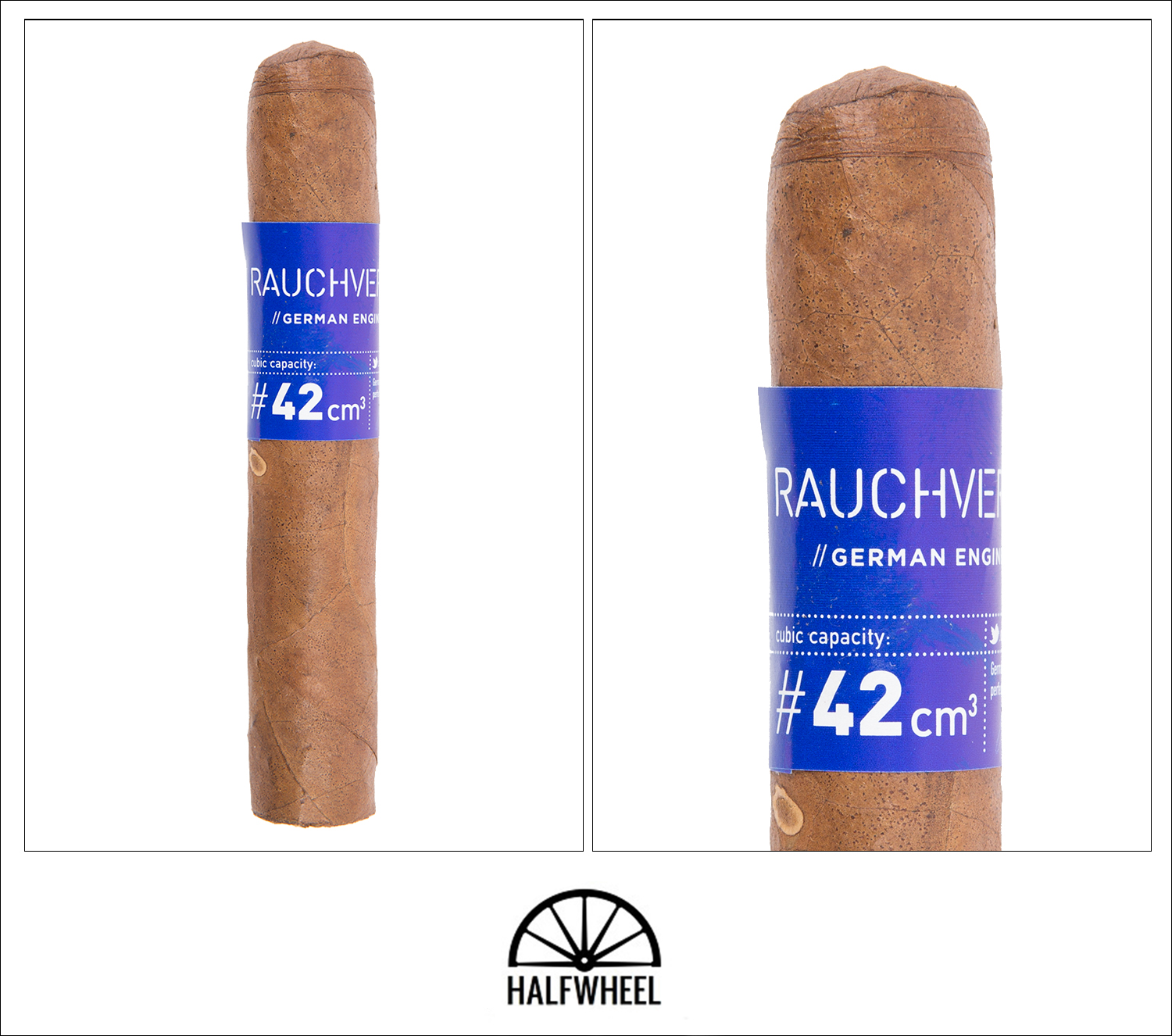 The Rauchvergnügen #42 is a decent looking cigar, but a quick turn of the first sample reveals a nasty water spot just under where the band is glued together, a visual blemish that would have relegated this cigar to the seconds pile at most factories. None of the other two samples showed such a blemish, and otherwise colors are a fairly uniform reddish brown. The roll quality looks decent, though on the first sample there is a clear depression where the band is glued that already has me worried just a bit, though the cap is applied well. There is a slight peak of tobacco that pushes the triple cap on the first cigar up a bit, and once clipped I find myself needing to do a bit of internal trimming in order to get a clean draw. From the foot I get a bit of toast and jam, a very pleasing mix of grain and sweetness that lacks any semblance of pepper but does occasionally add in some sarsaparilla and green grape sweetness. The cold draw ranges from quite loose with a minimal amount of resistance to being nearly spot-on, with flavors of mixed nuts, beefiness, a bit of salt and a faint touch of pepper standing out.

There’s a hearty amount of pepper to open up the Rauchvergnügen #42, a bit surprising given how little was offered before the cigar was lit, though not completely shocking. Depending on the sample it can be a bit too much, colored by a mineral that is simply too sharp for a leading flavor. It’s not quite a pepper bomb, but it is certainly the lead note and the one that shows the most evolution in the first inch, backing off a bit before returning with a white pepper profile for the nose while the palate gets a bit heavier offering of black pepper. Retrohales in the first inch are potent but pleasing, packed with table pepper and smatterings of chalk and a very faint marshmallow sweetness that adds depth to what at times feels like a bit of a one-note introduction. The first clump of ash breaks off at just about an inch in length, and almost immediately after the above photo was taken. Pepper stays a leading note heading into the second third, with a bit of an earthy, rocky undertone. 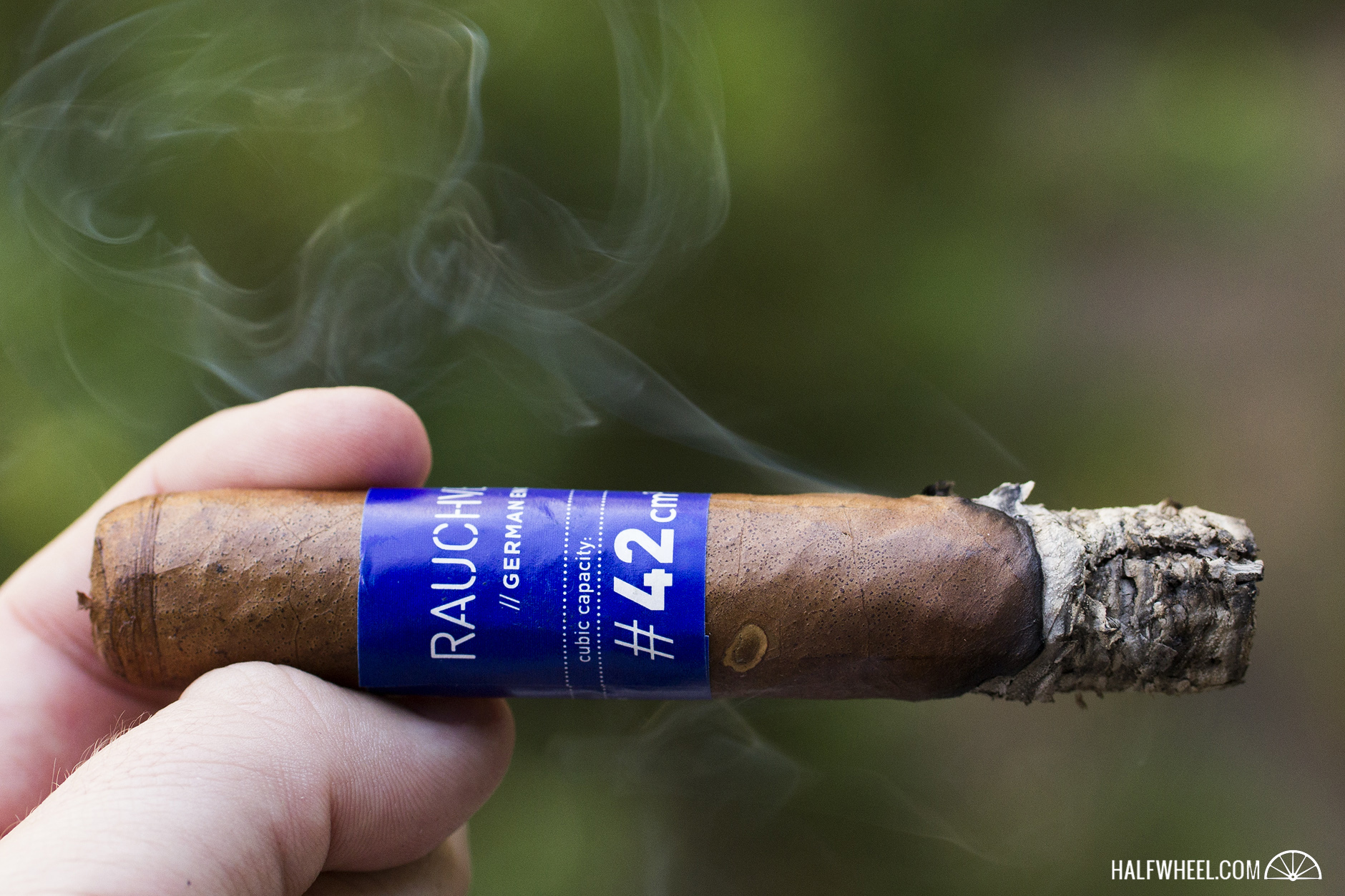 The burn line begins to go just a bit askew at the start of the second third, as the wrapper on the first sample had a spot that just didn’t want to burn without a nudge from the torch lighter, though the other samples performed better. The flavor from the Rauchvergnügen #42 begins to pick up more of the earth and rock, pushing the pepper to a more complementary role, in which it performs quite well. While I hate to say the the cigar continues to hammer away at a core note that I’m not quite sure of, it is a fairly monotonous journey through the first half, almost repetitious in hopes of drilling the flavor into my memory. When the cigar errs, it’s through touches of harshness that migrate from the back of the throat and into the chest, a sharp sensation that I can’t quite figure out whether or not I like, though I’m inclined to say I’d rather do without it. Once the burn line is past the midway point, the cigar gets a touch mellower and less upfront with the pepper and earth, dialing it back to reveal more of the mineral notes which are now more palatable. The retrohale, however, gets punchier and at times catches me off guard with the aggressiveness of its new profile. The cigar’s smoke gets a good bit hotter once the band finally comes of and the final third is on the horizon, and first impressions from this change are not good at all. 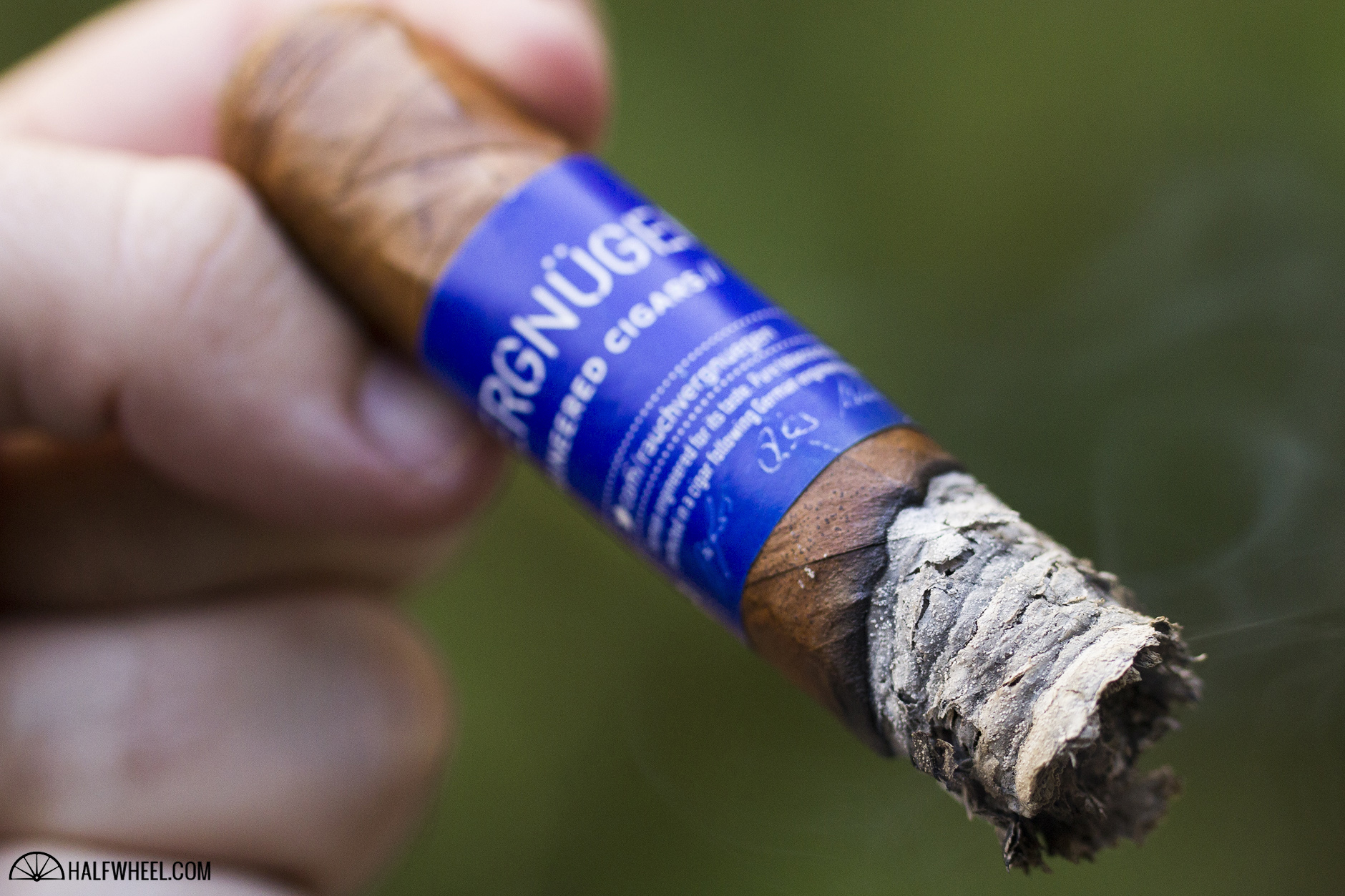 The Rauchvergnügen #42 can get bitingly hot to kick off its final third, and this is even with my normally below-average rate of taking a puff. In an attempt to abate this, I slow down even more, and thankfully the cigar doesn’t go out as a byproduct. When the heat is minimized, the cigar shows a much softer profile, dialing back to a medium-bodied smoke with much less pepper than before and just a slight tingle on the front of the tongue. Combustion issues hamper every sample with almost precise timing, as the cigar begins to go out suddenly with just over two inches to go and requires several often futile relights. 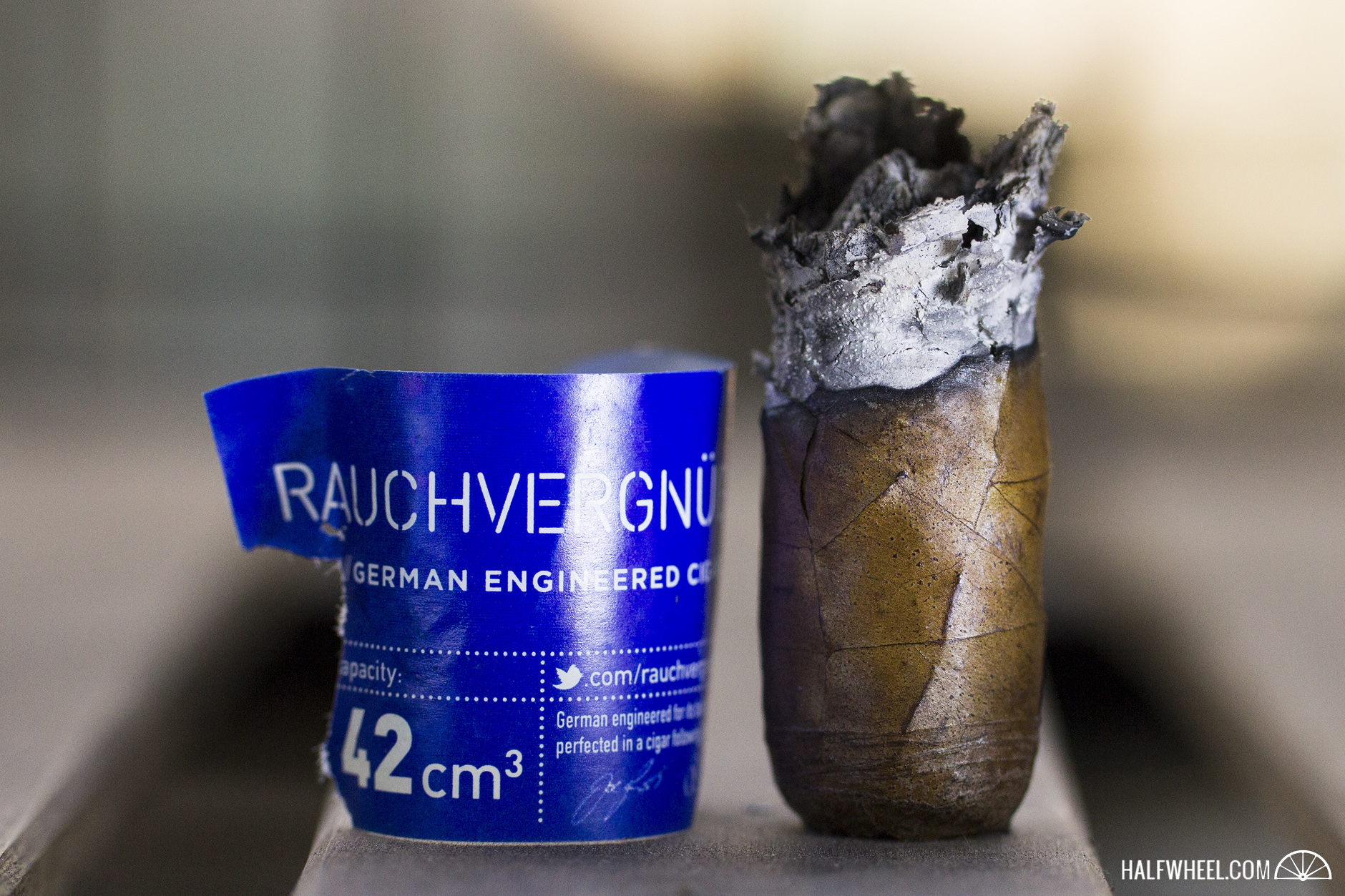 We don’t intend to give up before we even started. We are German engineers, and we are accepting this as a challenge. We discussed the issue and decided to do everything possible to enter the market before Aug 8, 2016.

I'm all for innovation and experimentation, which is what the Rauchvergnügen #42 seems to be about by bringing in a new trio of eyes to create a premium cigar. Yet when I hear an engineered cigar, I get a bit concerned as it would seem to conflict with the idea of a handmade, artisan creation that is the result of the blending process and trial and error. For the first two thirds, the Rauchvergnügen #42 smokes well and is plenty enjoyable, not the most complex or nuanced cigar but still on par with other cigars bearing the term premium. The final third could use some work, as the heat doesn't do the blend any favors. What intrigues me most about this is that in a field where art and science compete at times, this cigar could introduce engineering as a new consideration in crafting future cigars.