For those of you that don’t know, in 2005, Habanos S.A. introduced the Edición Regional (Regional Edition) series to consumers around the world. I think CubanCigarWebsite.comsays it best:

The series comprises special limited production cigars made exclusively for a regional market, and are available for a one or two year period.  After this, Habanos has the right to add this cigar to the current production range.  The cigars must be selected from current production vitolas that are not already available in that brand.  Some of the newly introduced vitolas from the premium brands are also excluded. Each release is initiated by the Regional Distributor, who under-right the setup costs. Some distributors have elected to reissue in the second year.  Reissue cigars are identical but the box leaflet may have a statement “Its great acceptance encourages us to present this edition again…” or similar, depending on the country of distribution.

There were only 5 different cigars released in 2005 under the Edición Regional banner, as opposed to 20 released in 2010. They were:

The first 5 cigars in the Edición Regional program were fairly small releases In fact, there were only 500, 25 count boxes of Ramón Allones Selección Suprema produced (12,500 total cigars). And, while we are now used to seeing separate bands for each ER designating where it was released (“Exclusivo Italia”, etc), two of the first 5 ER releases were different, with the Ramón Allones Selección Suprema a secondary band that says only “Edicion Regional” and the Ramón Allones ER Reino Unido has no secondary band at all. The cigar itself is an interesting color, with a pale green cast to it that almost makes it look like a candela. It seems well constructed but has quite a few veins present. It is perfect when squeezed, has some great give to it. The wrapper is dry and smells like sweet cedar, grass and a hint of pepper. The cold draw notes include earth, wood and dry grass.

The first third starts out extremely grassy, with other notes of oak, earth and a bit of spice on the tongue. There was a slight bitterness in the background as well that stayed constant for the entire first third. The second third ramped up the sweetness quite a bit, but the flavors remained pretty much the same, with grass, earth, wood and leather being the dominant notes. The bitterness still hung around in the background, but the spice from earlier was totally gone and did not return, not even on the retrohale. 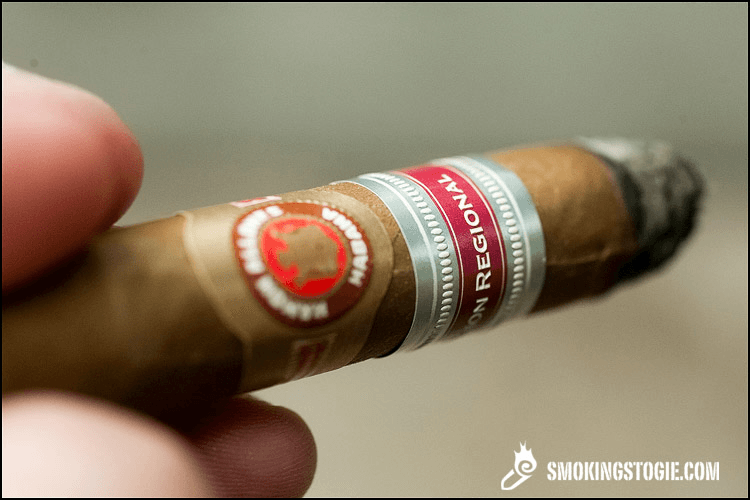 The final third was an almost carbon copy of the second third: grassy, sweet, slightly bitter with wood and leather. Not much change at all, and stayed that way until the end. I had heard though the years that some of these first releases had some problems with improper fermentation and curing of the tobacco, and that must be what happened with these. The color of the wrapper is extremely unusual for a recently produced Cuban cigar, and the bitter grassy flavors just confirmed that. Thankfully, according to other reviews not all of the cigars in this ER release exhibit the same issues, although I have been unable to find any more to compare them more thoroughly. While this was not a horrible cigar flavors wise, they were not what anyone is expecting from a Cuban cigar in general and a Ramón Allones specifically; so I would say if you find some of these that have a green cast, stay far, far away, unless you like the idea of smoking what is basically a Cuban candela.