Amongst Habanos S.A.’s massive portfolio of Cuban cigars, there are various series that produce new, limited releases every year.

The largest source of new releases is the Edición Regional series, where distributors are able to commission a unique vitola amongst a wide number of Habanos S.A. brands. Then there’s the Colleción Habanos series, which usually results in a single large and expensive cigar that is packaged in boxes designed to look like books. The Reserva and Gran Reserva series take a popular cigar from the most iconic Cuban brands and try to improve on them with aged tobaccos in fancier packaging.

Out of the quartet, the Edición Limitada series—the longest-running series—sort of stands out as the odd one of the bunch. Introduced in 2000, the series originally started with cigars that featured unique cigars with two-year-old wrappers that were typically darker than regular production cigars, though now the company says all of the tobacco is aged for two years.

Since 2005, the company has typically announced three new Edición Limitadas per year—though in 2015 and 2020 there were fewer—but the rhyme or reason for the cigars selected isn’t entirely clear. Habanos S.A. used to classify its brands into four different categories, something which helped when explaining these limited edition series. For example, the Edición Regional releases couldn’t be commissioned from its Global Brands—Cohiba, H. Upmann, Hoyo de Monterrey, Montecristo, Partagás, Romeo y Julieta and technically, José L. Piedra—while the Reserva and Gran Reserva had to be a Global Brand.

Edición Regionals have spanned across the entire portfolio as I’ve explained before:

What’s unique about the Edición Limitadas as compared to the aforementioned Reservas or red-banded Edición Regionals is that all Habanos brands seem eligible for the program. Local brands (Ramón Allones), multi-local brands (Punch), global brands (Cohiba) and niche brands, like Trinidad, have all been part of the program.

Edición Limitadas are made using tobacco that has been aged for at least two years and in general, there are three released per year.

I bring all that up because the subject of today’s review is rather unique.

In 2005, Habanos S.A. launched the Edición Regional series, though it wasn’t the start of the concept where distributors commissioned unique sizes for their market(s). There were four cigars—two Punch and two Ramón Allones, one of each for Italy and Switzerland—that debuted with the red and silver secondary bands that have become commonplace for the series.

Also released that year was the Ramón Allones Belicoso, which measured 5 1/2 x 52 and was released as an exclusive for Hunters & Frankau, the Cuban cigar distributor for the U.K. It came without the special secondary band, but for all intents and purposes, it was an Edición Regional.

Last year, that cigar returned, albeit with a different name and a different secondary band. As you have probably guessed, it’s an Edición Limitada release, meaning it was sold globally. 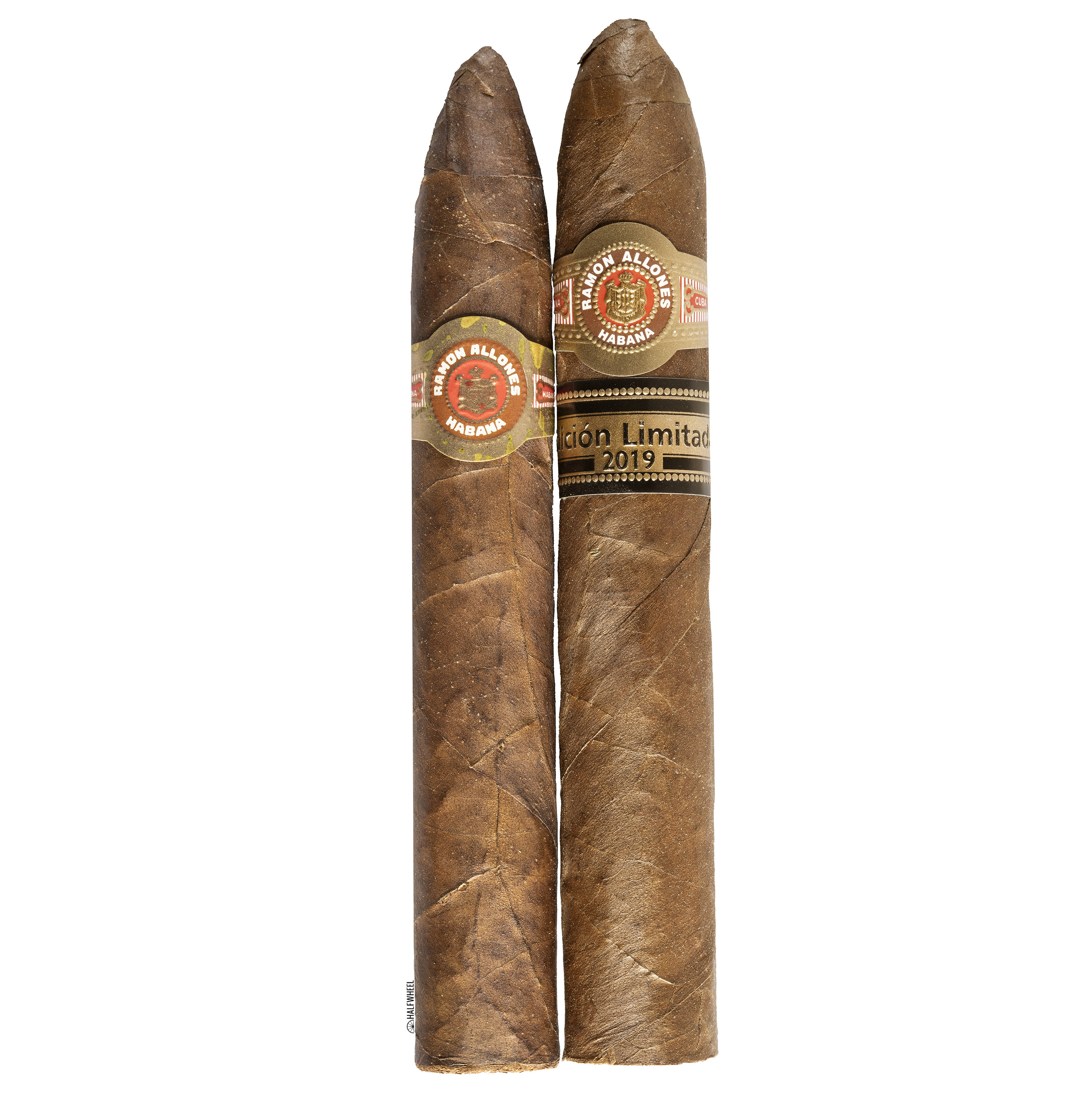 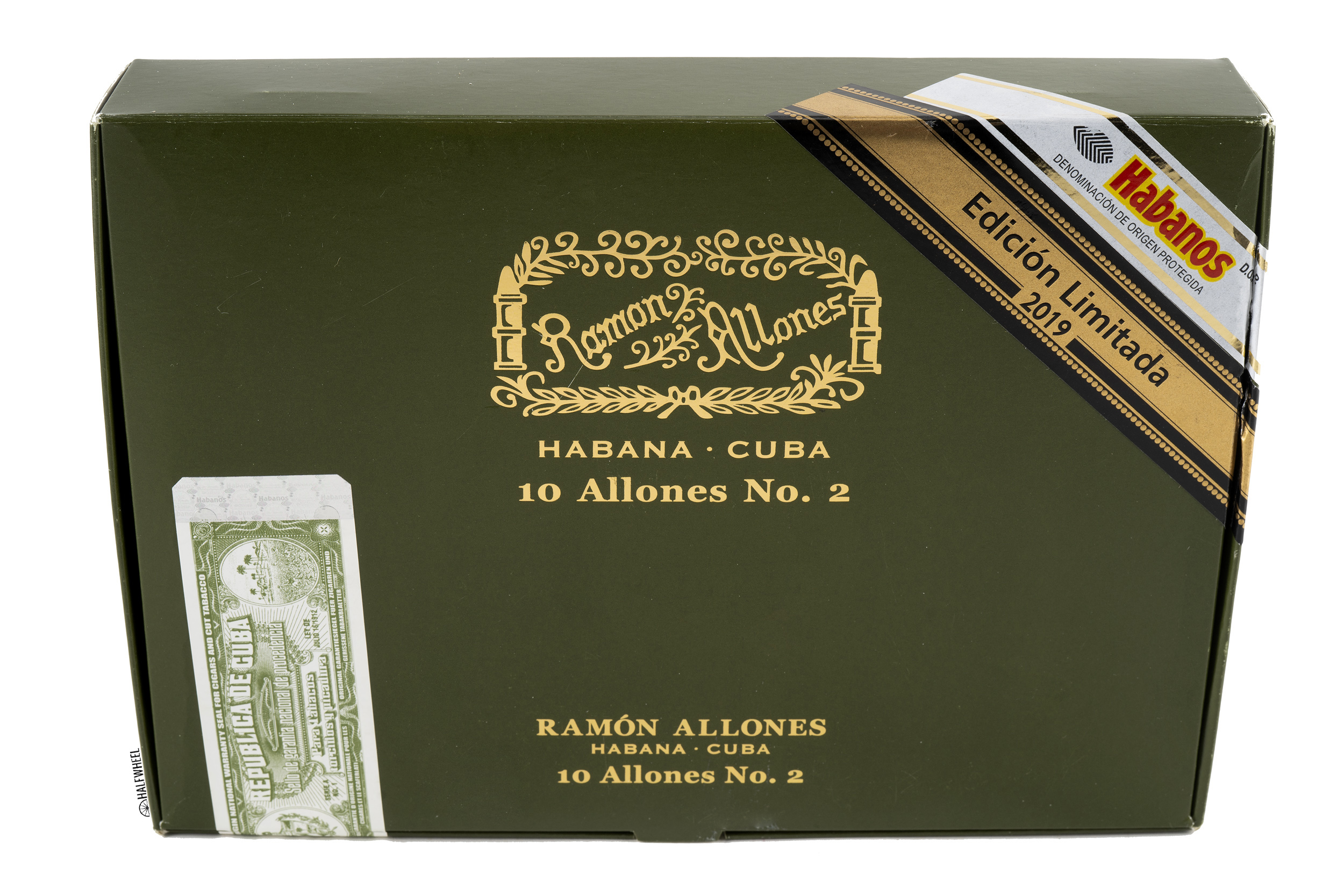 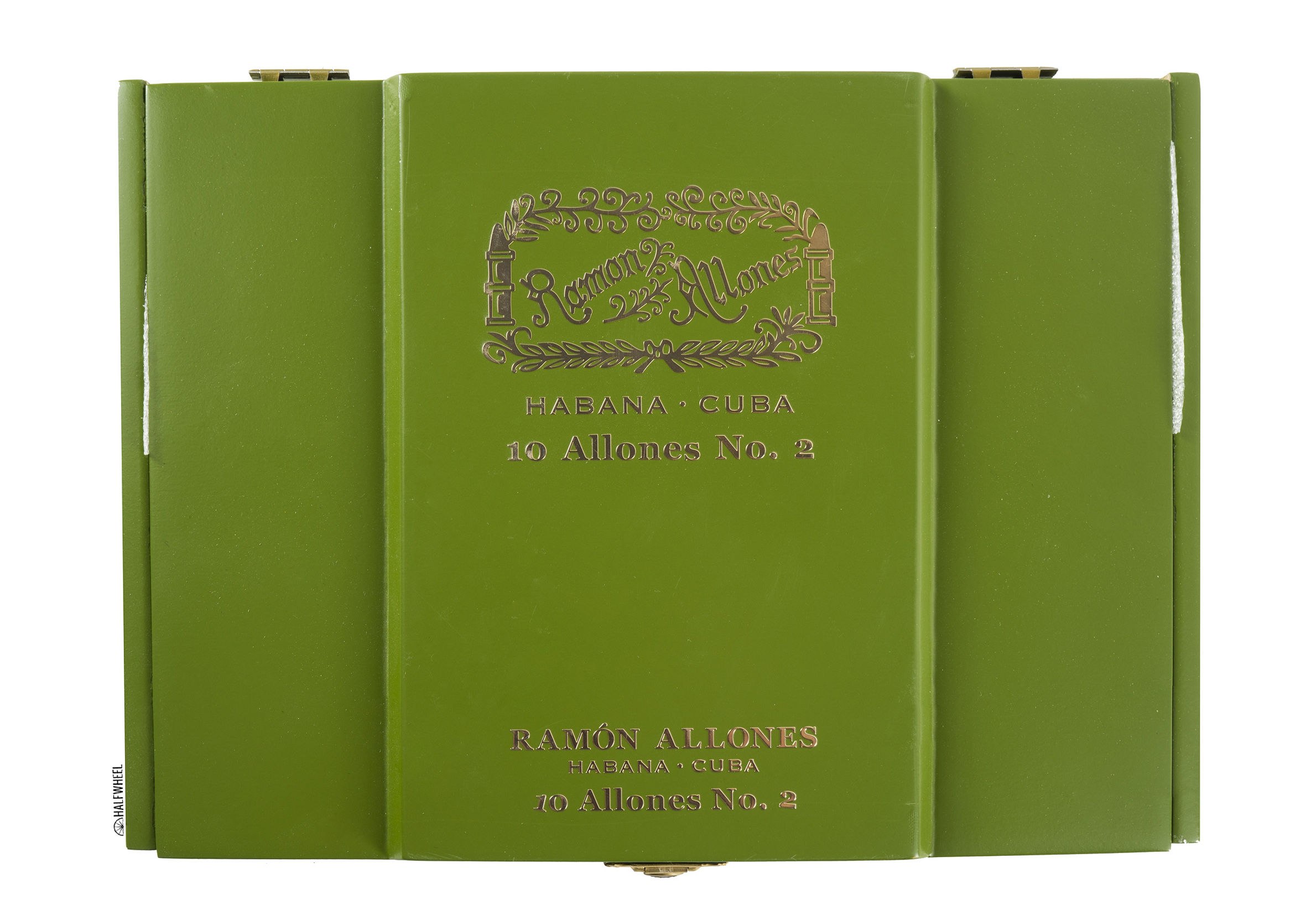 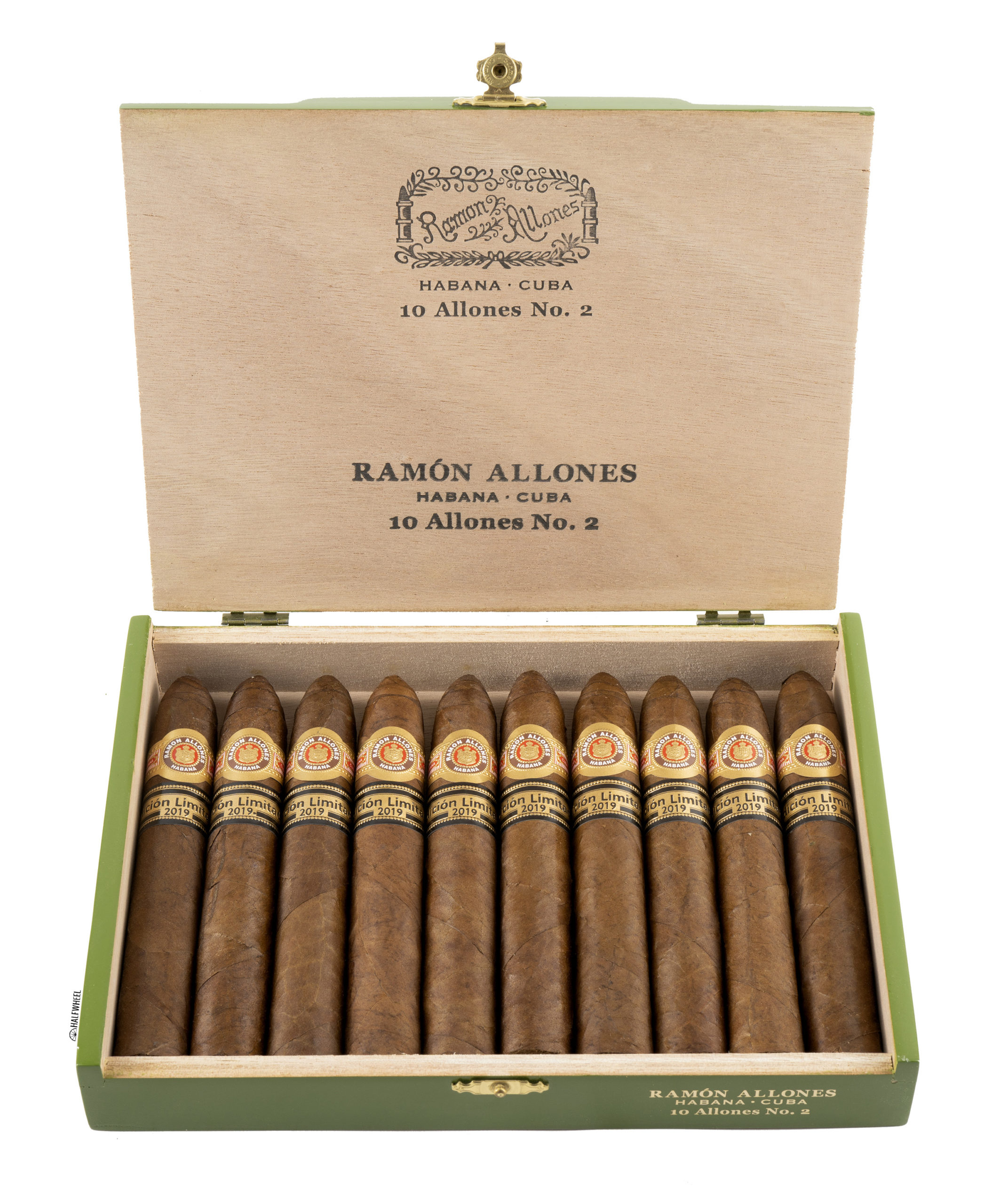 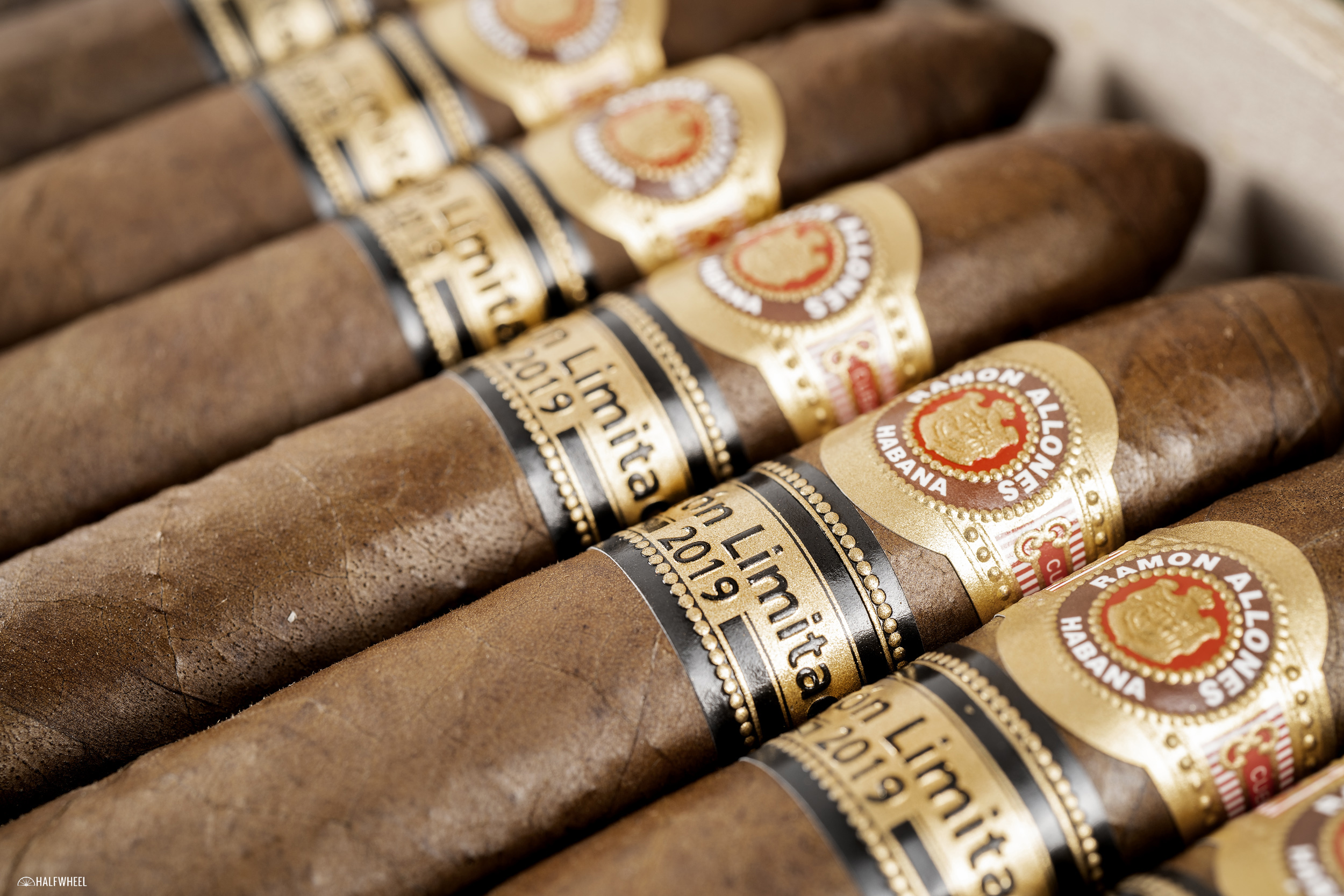 Outside of the bands and the two-year-old tobacco, the other change is that the cigar is being sold in green wooden boxes of 10 compared to the 25-count cardboard boxes that were used for the 2005 release.

In recent years, Habanos S.A. has generally picked a specific distributor to serve as a launch partner for each Edición Limitada release. Hunters & Frankau was the obvious launch partner and the cigar was previewed in the U.K. in August 2020 and began arriving on shelves in October 2020. 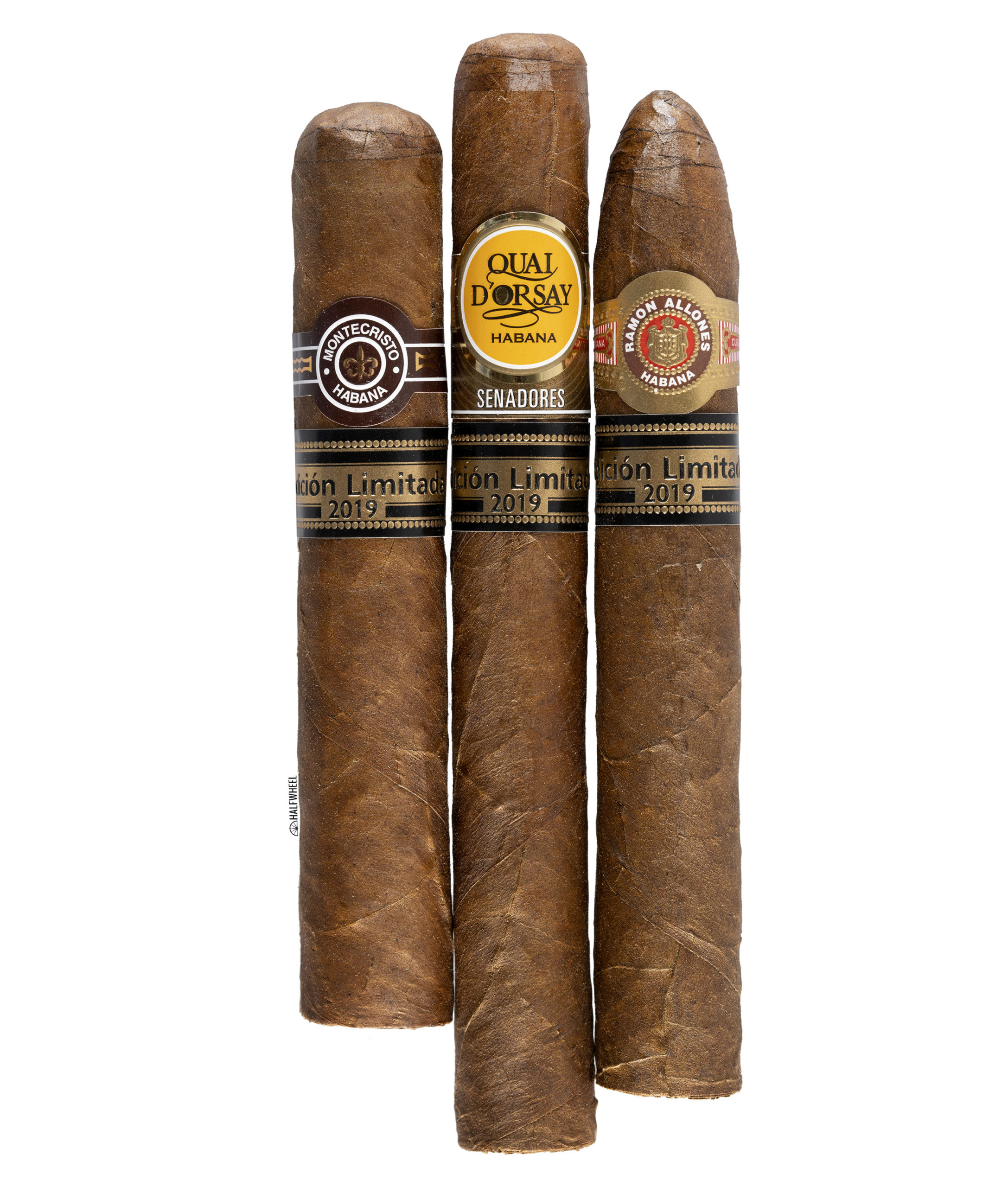 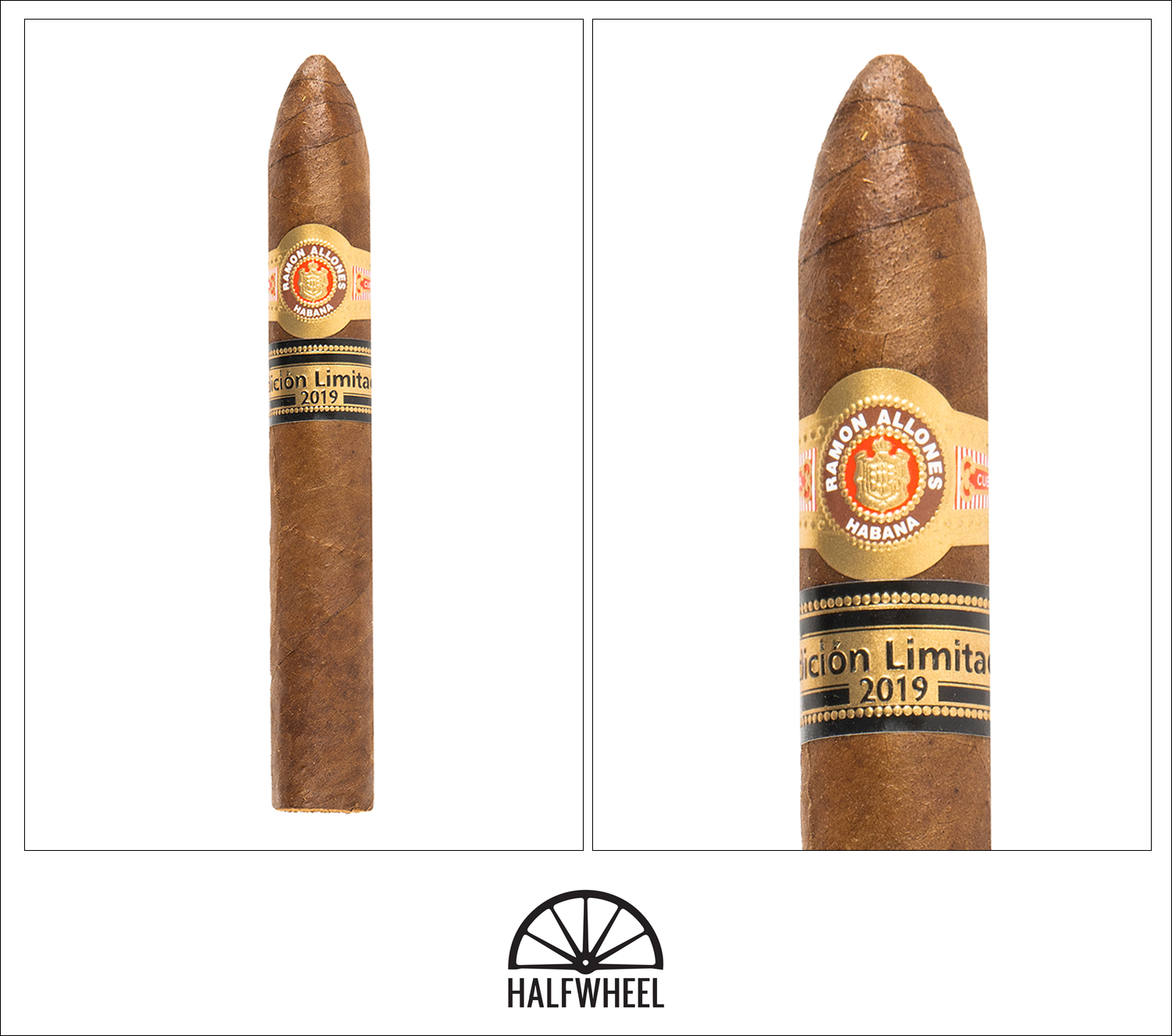 I’m guessing the intent for this shape isn’t exactly what the cigars out of our box look like. Some parts of the cigar have a slight box-press, which creates a look that seems more like a trompeta vitola—one where the taper keeps extending until the end of the foot—instead of a more traditional-looking belicoso. The wrapper has a lot of oil and a fair amount of spots, and as is often the case with Edición Limitada releases, it’s a bit darker than what I would typically expect from a Ramón Allones. There’s not much aroma from the wrapper, just something that reminds me of old paper. The foot has a medium-full aroma with floral flavors, nuttiness and graham crackers. Cold draws aren’t the most appetizing of mixtures: sugar, white pepper, earthiness, coffee and some nuttiness.

The Ramón Allones begins with nuttiness, earthiness and leather along with lesser notes of sourness and chalkiness. While I’m not thrilled about the latter two flavors, I’m surprised by just how full the flavor is from the first puff. Fortunately, those less desirable flavors decline after 10 or so minutes and I can barely taste either as the first inch of ash is ready to be knocked off. Instead, there are flavors of pasta noodles and earthiness on top of some coffee beans and creaminess. The finish has more earthiness on top of some burnt bread, coffee, a generic fruity flavor, and a mild amount of black pepper. Retrohales are interesting with fruitiness, lemon and honey joining the coffee and earthy flavors that are reminiscent of puffing without putting smoke through my nose. The finish of the retrohale sees the pasta from the main flavor come over and mix with the honey and lemon. It’s not as sweet as the initial parts of the retrohale but it’s certainly complex. Flavor is full, body is medium-full and strength is medium-plus. One cigar needs a touch-up, but otherwise, construction is great in the first third. 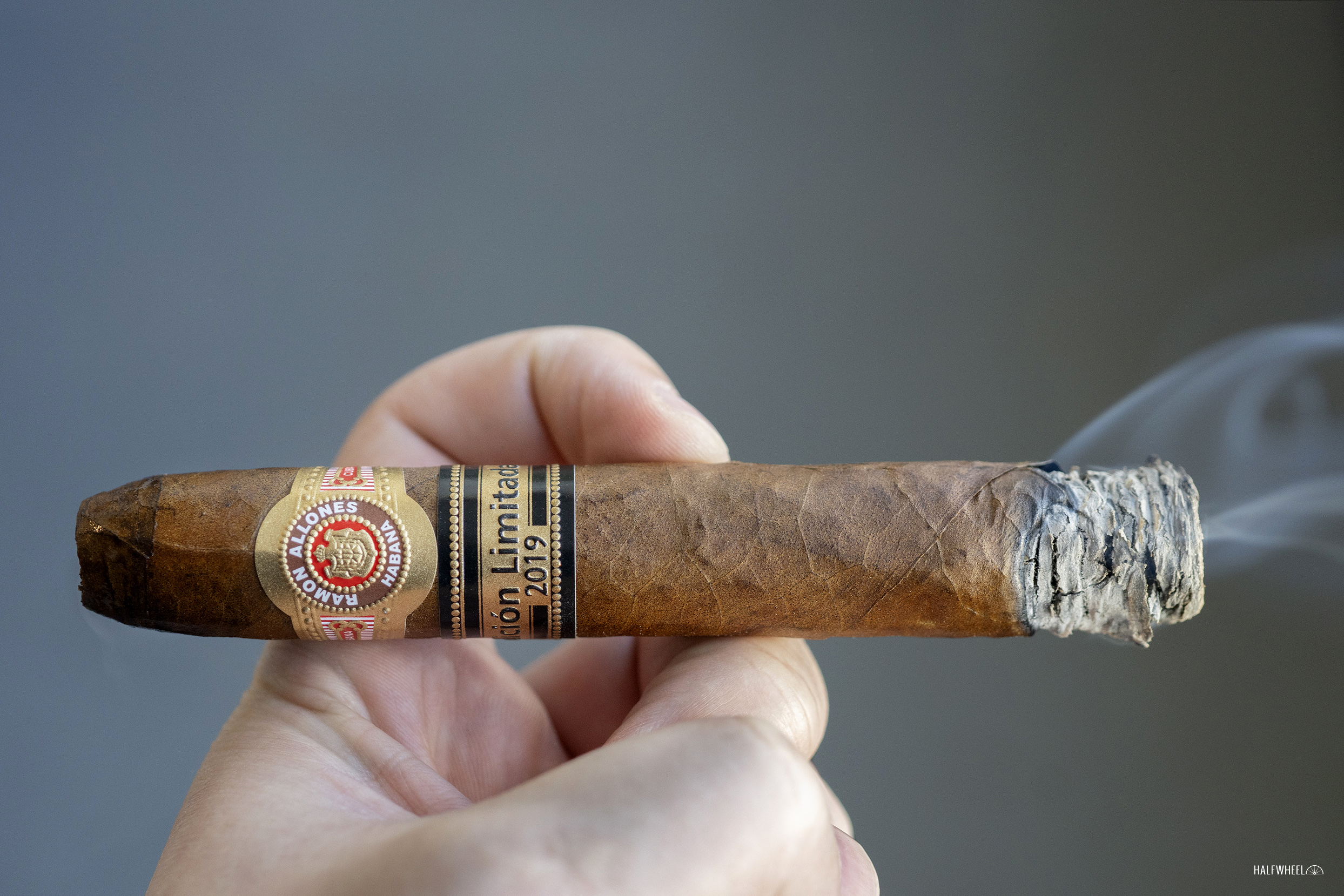 It takes a bit longer than a defined second third portion for the profile to shift, but shortly after the halfway mark things are noticeably different. Earthiness has overtaken the pasta as the main flavor and the black pepper increases quite a bit. Two samples have a mustard-like tanginess, though I don’t get that sensation on the second sample I smoke. The finish is a bit tougher to decipher than the first third, but there’s still plenty of earthiness, now joined by lemonade, coffee, creaminess and a building saltiness. The unique fruit, lemon and honey mixture from the first third is still present in the retrohale during the second third, though the honey is a bit milder than before. About 10 seconds after the smoke has left my nostrils a nuttiness begins to build and lasts until I’m ready to take another puff. Flavor is full, body is medium-plus and strength is medium-plus. A touch-up is needed here or there to help with an uneven burn, but construction is pretty good. 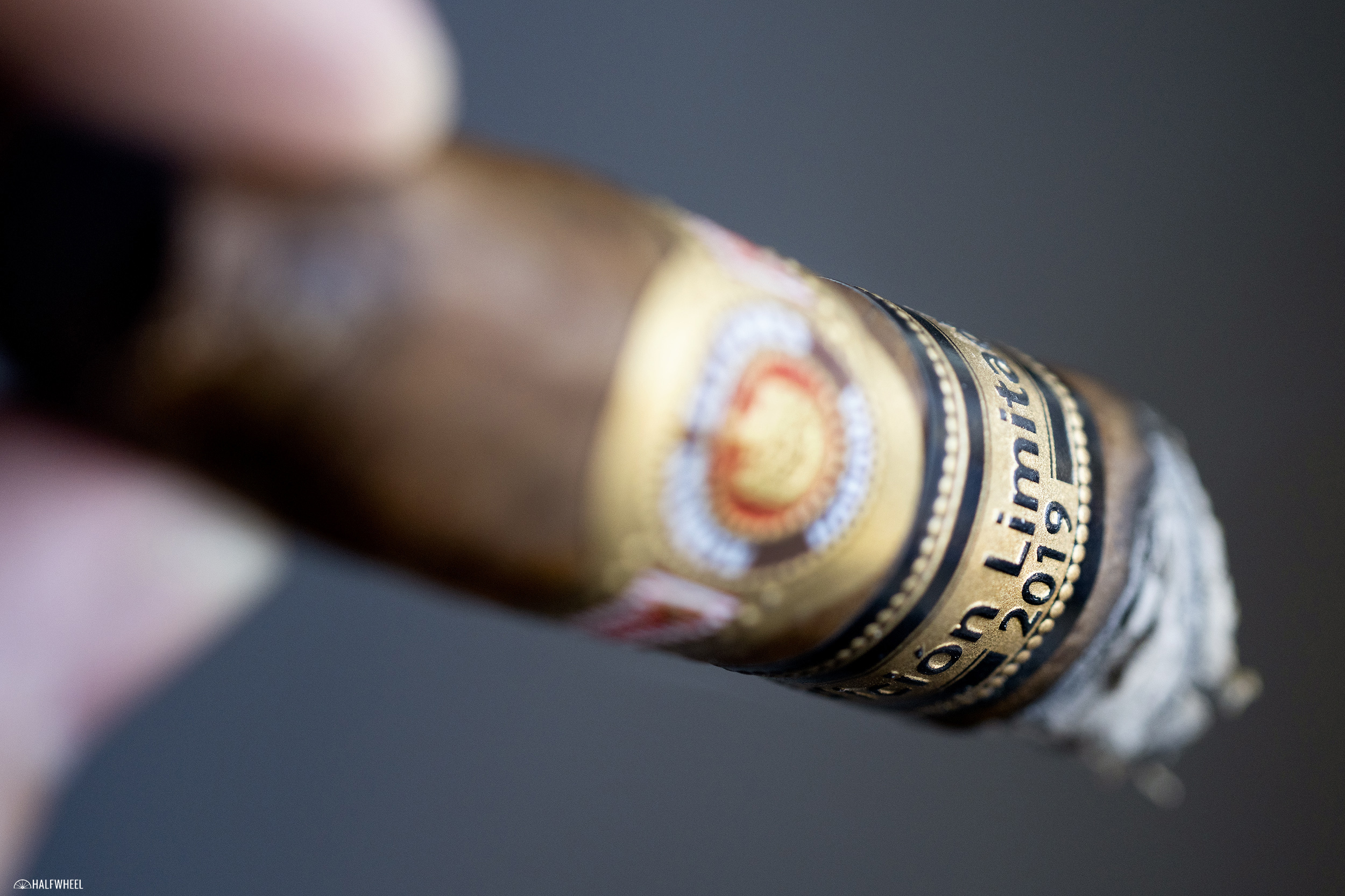 While the second third of the Ramón Allones No. 2 might have been a gradual transition, the final third is a pretty sharp turn. A toasted earthiness joins nuttiness to form the base of the flavor. Accenting that is a pretzel-like saltiness and some black pepper, the latter of which is all over the inside of my cheeks and on the bottom of my tongue. The finish keeps some of that nuttiness, joined by fruity flavors, bread and an explosion of saltiness. The black pepper seems to get much stronger, though it’s only the side of the cheeks. Retrohales are milder than before, though the honey and lemon flavors remain. There’s also some macadamia nuts and a Worcestershire sauce-like sensation. While there are a lot of flavors, the retrohale is both milder than it was before and much milder than the main mouth flavor. Retrohales finish with a mixture of nuttiness, saltiness and black pepper, though I think that might just be an extension of the main flavor. Outside of the retrohale, the flavor is full, body is medium-plus and strength is medium-plus, though it’s building until the very end. 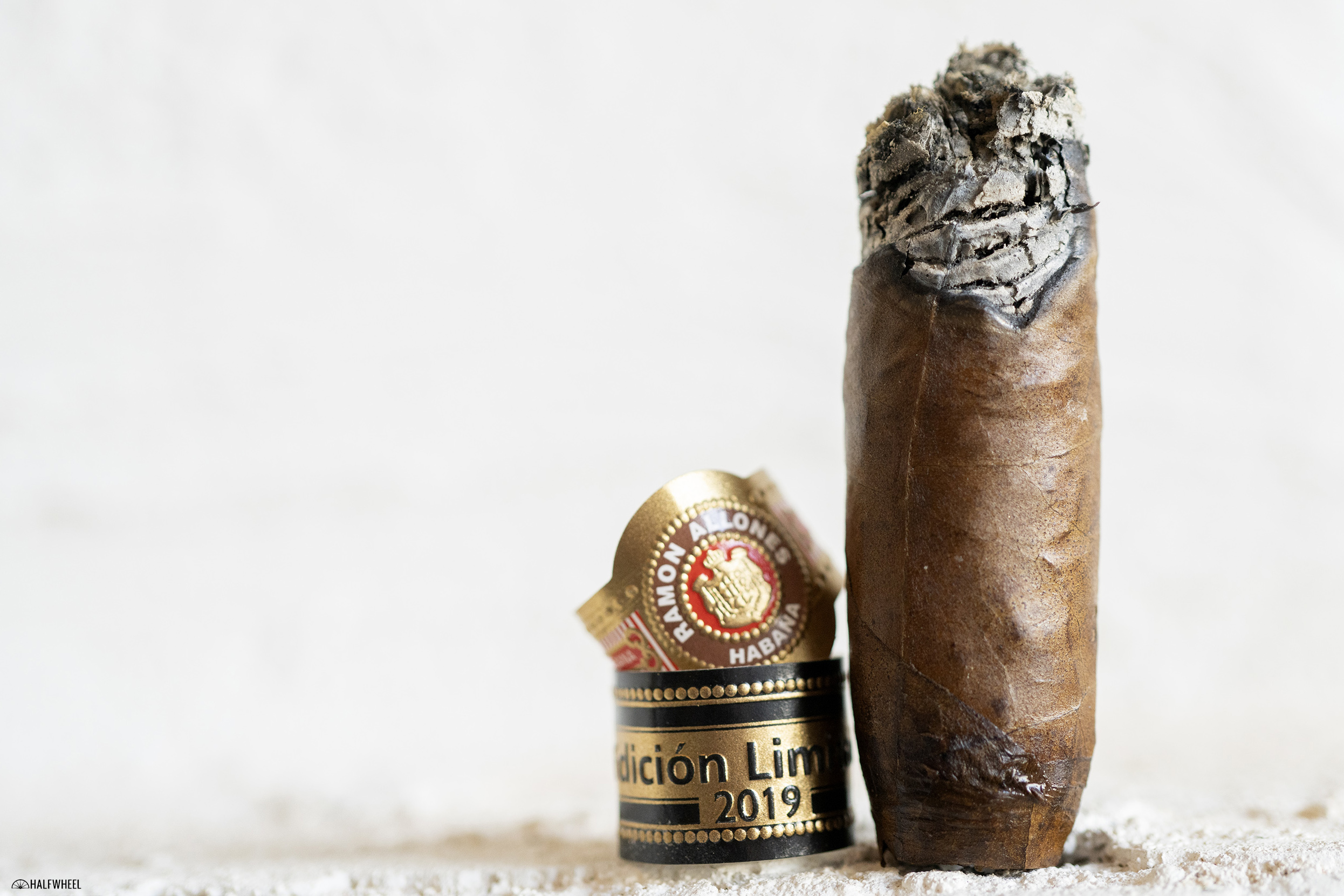 What a difference the draw can make. Compared with last week's Montecristo Supremos review—which had decent flavor but three cigars that didn’t seem to be bunched properly—the Ramón Allones No. 2 is a breath of fresh air. Construction wasn’t perfect and the flavor definitely needs some time to develop, but this is proof that not every new cigar from Cuba has to be plagued with poor construction. Whether it will develop the same way as the 2005 version this cigar is based on is anyone’s guess, but my educated guess on the three that I’ve smoked is there’s plenty of reason to believe that’s quite possible, if not likely. Is it that much better than a good Montecristo No. 2? No. But if asked to choose between the two at the same price point, I’m not sure there’s a wrong answer.