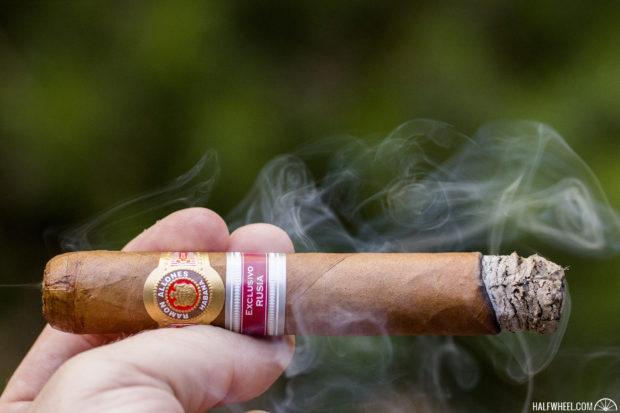 if you’ve ever wanted to get a glimpse of just where cigars are smoked and enjoyed around the world, one decent place to start is the list of Edición Regionals that Habanos S.A. has produced.

The program, which launched in 2005, brings brands in unique sizes to specific countries or regions, by way of the area’s distributor guaranteeing a purchase of at least 25,000 cigars, and since 2012, being limited to one Edición Regional release per year. The other requirement is that the size must appear elsewhere in the Habanos S.A. portfolio but not in the regular production of a particular marca, with a very small handful of releases being cigars that had previously been in the brand’s portfolio but since retired.

When looking over said list, or just thinking about other ERs you may have come across, there are a number of countries who appear regularly, such as Switzerland, the United Kingdom, Germany, Spain and Canada, as well as the Asia Pacific region and a trio of countries known as Benelux, an abbreviation for Belgium, the Netherlands, and Luxembourg.

Then there are the countries who you only see listed once or twice: Austria, Brasil, Bulgaria, India, Israel, Qatar, Serbia, South Africa and Turkey have all received single releases as part of the Edición Regional program. On the list of countries with two releases, one country sticks out: Russia.

Without getting into the socioeconomic and cultural realities that would affect cigar smoking, given the size of Russia and its proximity to Europe and Asia, which have a fairly strong cigar smoking culture, Russia does seem like a bit of an anomaly. With a population of just over 142.1 million people, it’s the world’s ninth most populated country, so it’s not for a lack of people to consume that minimum of 25,000 cigars.

After being presented in September 2017 during the VIII Habanos Day in St. Petersburg, Russian cigar smokers got to close out 2017 by getting their first look at a new cigar created just for them, the Ramón Allones Hermitage Edición Regional Rusia. 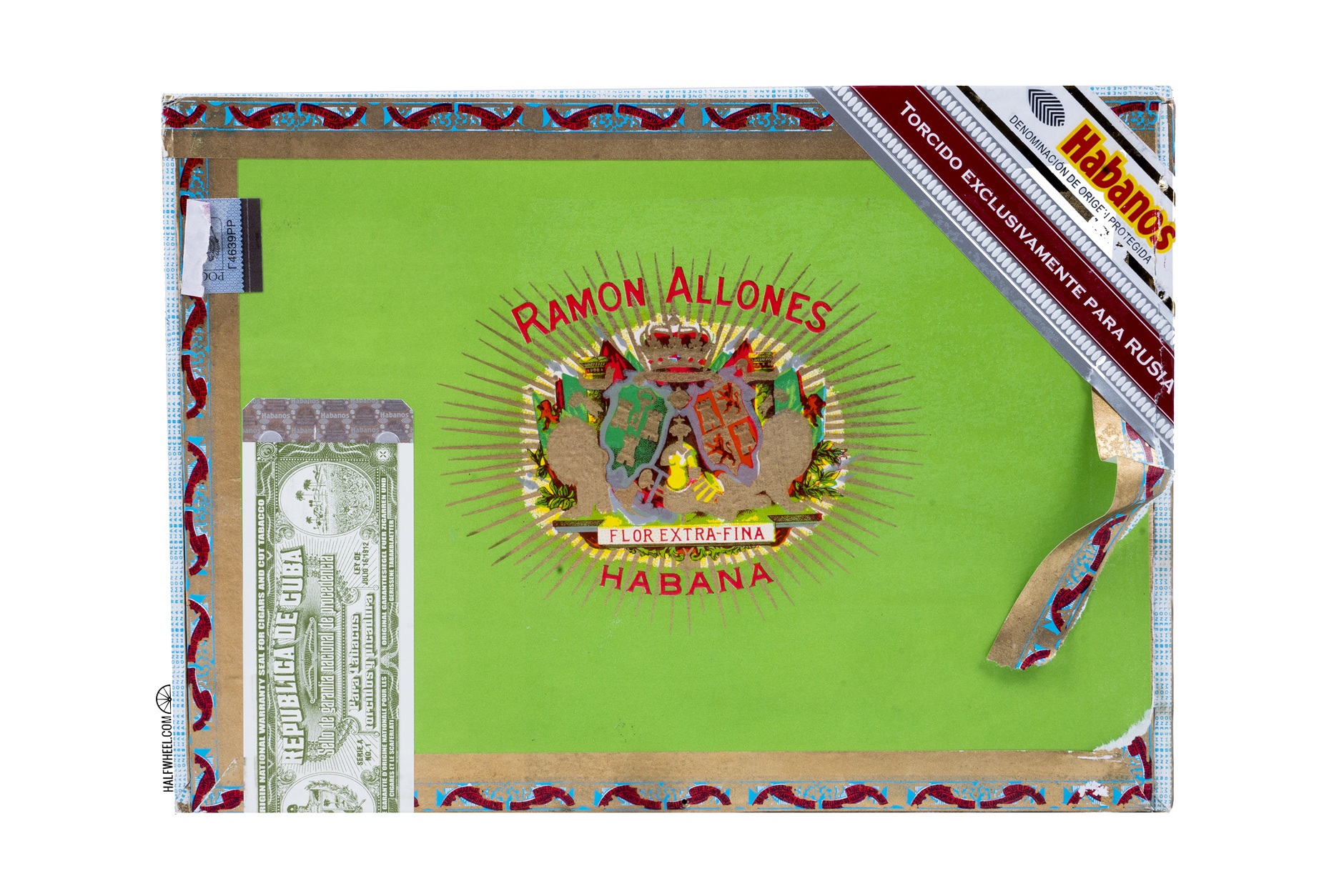 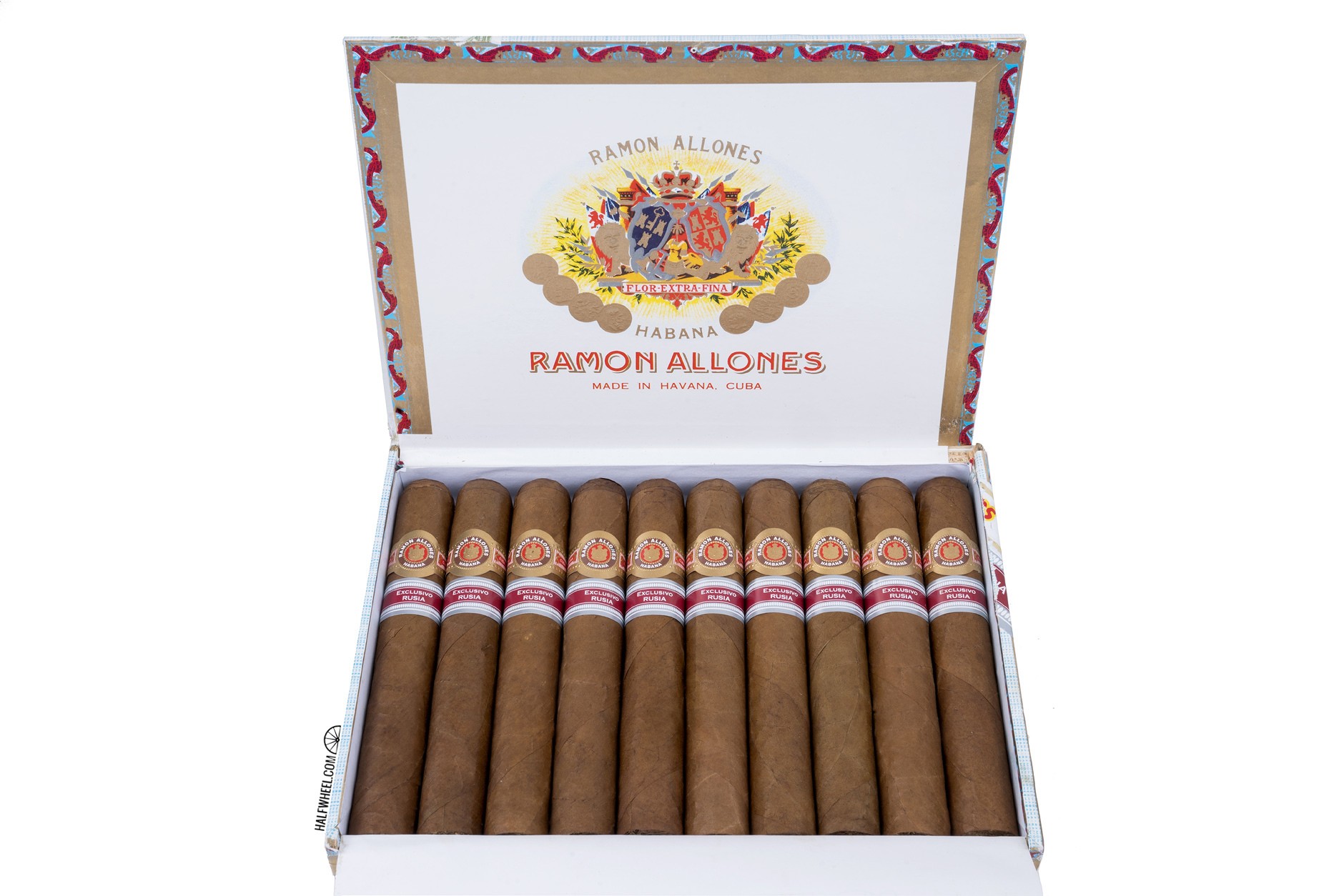 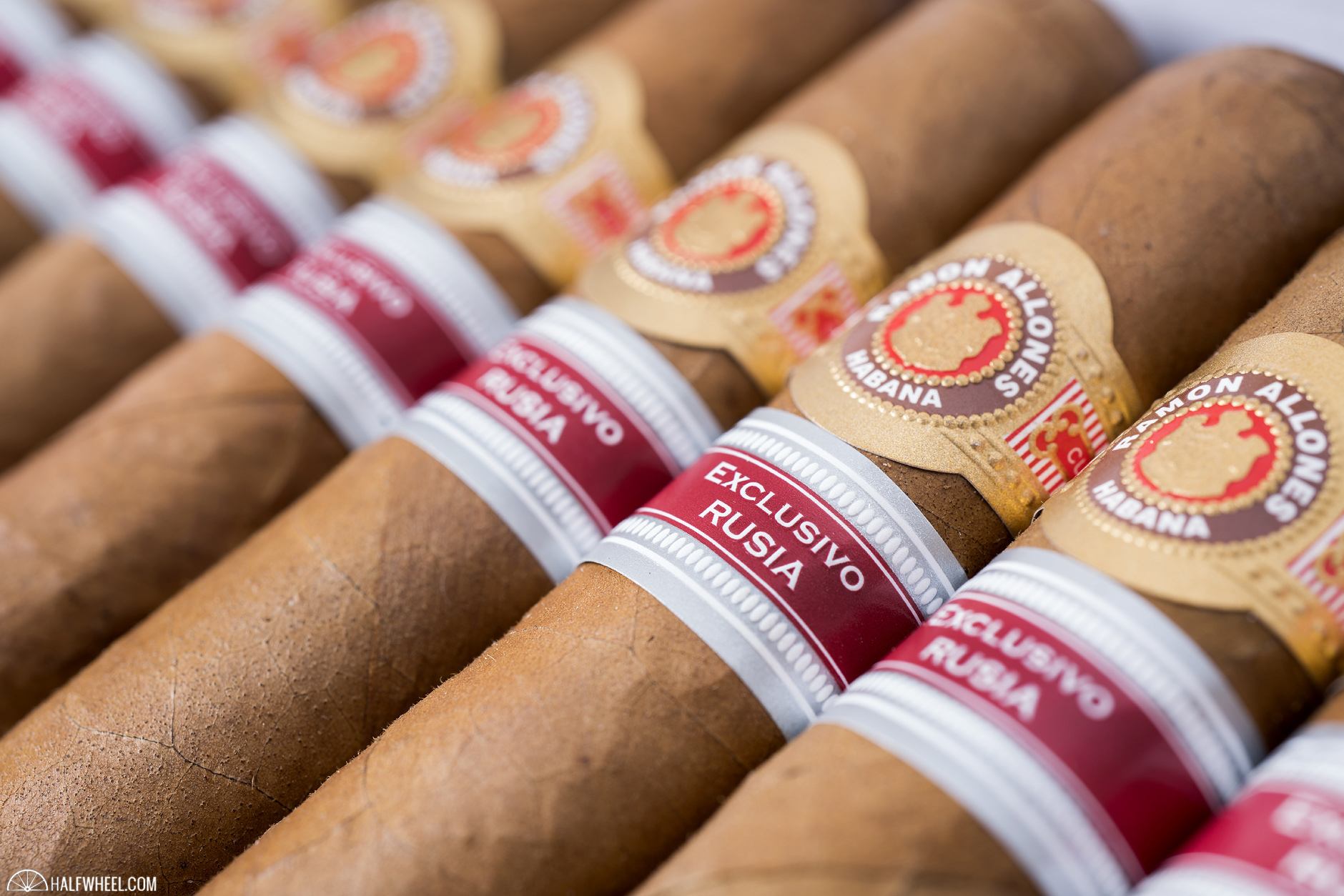 The Hermitage comes in a fairly familiar robusto extra vitola that measures a 5 1/2 inches (140mm) long by 52 ring gauge. In addition to being a commonly used size in the non-Cuban universe, it’s also found in Habanos S.A.’s portfolio by way of the Cohiba Genios, which is part of the brand’s Linea Maduro, as well as the H. Upmann Connossieur A, a Habanos Specialist Exclusive release from 2013. It’s also no stranger to the Edición Regional program, having been used for the La Gloria Cubana Belux No.1 for Belgium and Luxembourg in 2011, and the Ramón Allones Sur, which was created for Lebanon in 2014.

While Top Cigars S.A., the distributor, did not reply to several emails regarding production numbers and a formal release date, the incredibly helpful CubanCigarWebsite.com indicates that 6,000 boxes of 10 cigars were produced, with a release in early 2018. However, a Facebook post from a prominent Russian cigar retailer indicated it was released on Dec. 25, 2017.

The store also indicated that single cigars cost 980 rubles, which is significantly less than the 2,100 rubles that it originally told halfwheel that the cigar would cost. In American dollars, that’s $15.90 versus $34.08.

It is the second Edición Regional for Russia, following 2011’s Bolívar Emperador, a 6 1/5 x 48 grand corona released in 2011. For that production, 2,500 individually numbered boxes of 10 cigars were produced. 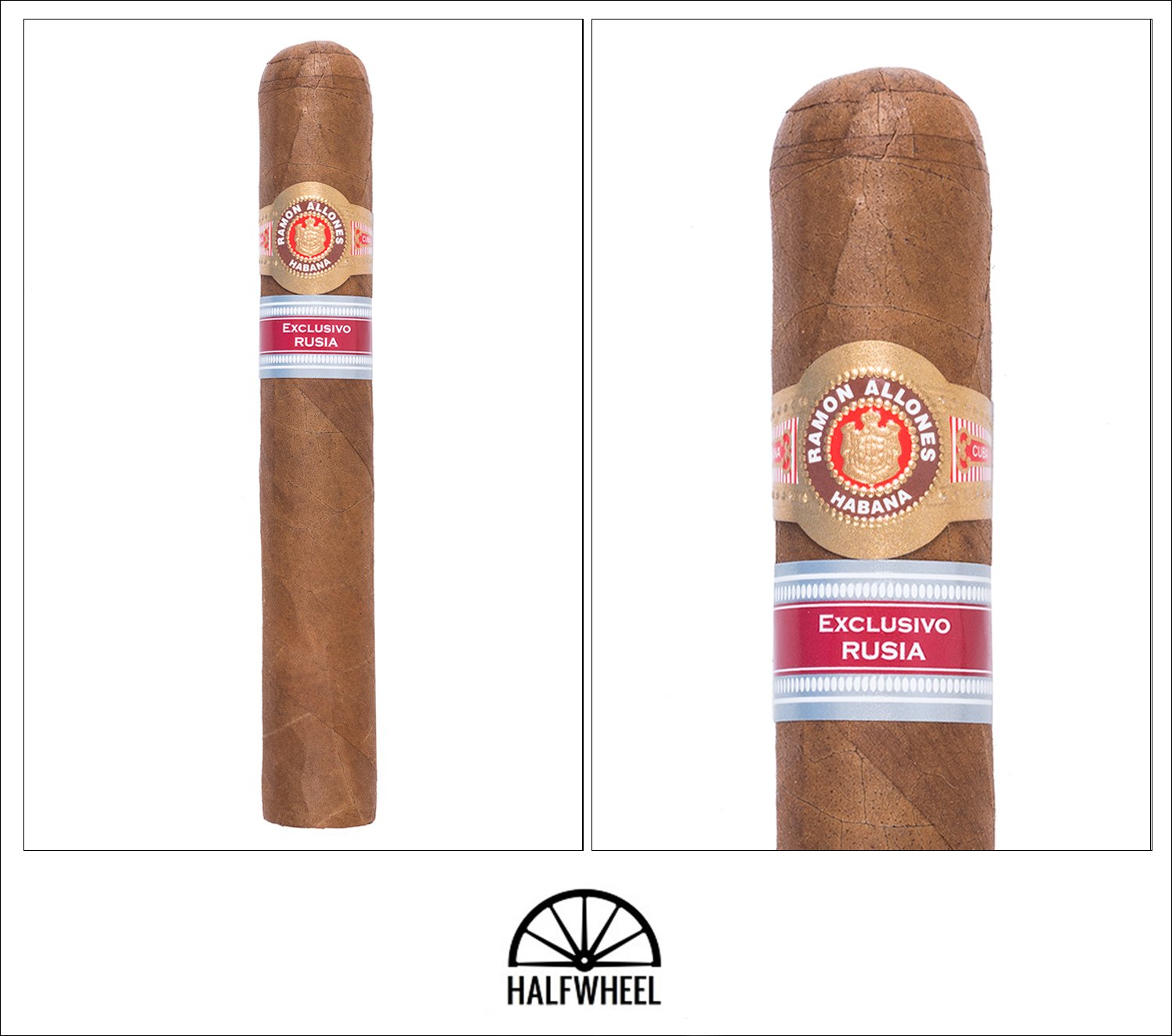 While I was tempted to start this review with The Ramón Allones Hermitage looks like a typical cigar…, upon closer inspection it doesn’t, at least not like what I consider to be a typical Cuban cigar. Yes, the banding is consistent and familiar, but the wrapper leaf if much smoother than I generally associate with the island, and not only are the veins fewer in number, they don’t have the bunching and puckering I’ve seen on numerous other releases. The top leaf is a light brown that has just a touch of red in it, which gets highlighted by the varying reds in both of the bands. In general, it is a firmly rolled cigar with invisible seams and a well-applied triple cap head, though there is a big soft spot to be found beneath the secondary band on the second sample, while the third is squishy near the head. The foot is mild with a bit of barn wood and dried apple sweetness, and no appreciable pepper despite the woodiness leaving a dry tingle in the nostrils. The cold draw is on the firm side with flavors that fall between woods and thick corn flakes, both of which are less than vibrant on the tongue. There’s a little bit of pepper to be found on the lips, while some thick sugar sweetness shows itself on the front of the tongue.

The Ramón Allones Hermitage starts medium bodied but a touch muddled with no really clear or vibrant flavors. There’s a bit of mixed nuts that seems to best encapsulate the general profile, while pepper treats the front half of the tongue and nose, but the profile almost seems like a really dense biscuit at the outset. The tight draw in the first sample makes it tough to get as much smoke as I’d like, though it is eventually achievable. The first clump of ash drops off at a touch under an inch in length as I hold the cigar in my hand, the first of what would be a handful of instances where the ash ends up on me instead of in the ashtray. While the pepper does a decent job at keeping the palate engaged, the cigar struggles to unfold the nuances that I’m hoping it contains, with few specific notes able to be identified. There also doesn’t seem to be much of a base note developing, at least not anything that helps anchor it to the palate, almost a percussion- and rhythm-free piece of music if I were to make that comparison. 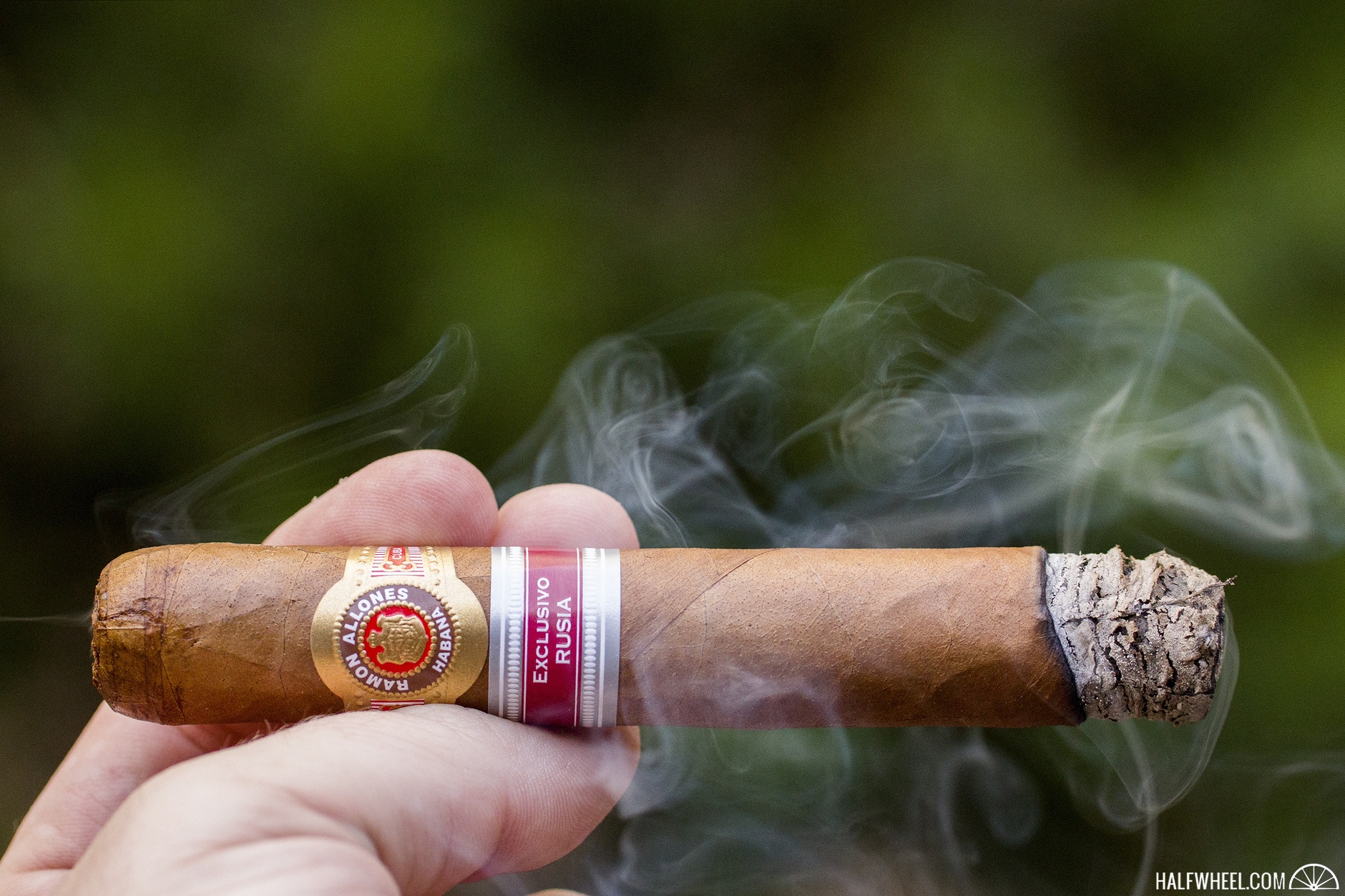 The second third begins to see the flavor come into focus, though it’s not always resulting in the same picture among the three samples. There is a dry wood that is fairly common throughout the samples, while some samples take on a very faint bit of metallic twinge, though it is enough to be discernible on the front half of the tongue. That region gets most of the stimulation in this section, and at times there is a distinct bite from the cigar that latches on to the tip of the tongue and hangs on with a bulldog’s persistence. The back end of the second third gets a bit more peppery and just the slightest bit charred; while I’ve never been shy to use the term robust in a review, it’s not appropriate here, as the profile is more like burnt toast than rough, rocky earth. What it is, however, is more vibrant; while the flavors seemed introverted in the first third, they are definitely more extraverted heading into the final third, and at their fullest, quite biting on the front of the tongue. The technical performance has generally been good as well; draw and smoke production are good, while the burn line is a bit wavy but not egregiously uneven, though each sample comes with its own challenges. While the cigar maintains its newfound, slightly burnt toast profile, it seems to pick up a bit of mineral-laden terroir at the start of its final third, which only makes the notes in the middle of the profile that much brighter and biting, while it feels like the cigar is lacking any sort of grounding notes. The tongue-tingling that has generally been enjoyable is now a bit of an annoyance and a turn-off. The smoke also is becoming hotter with each puff, and even when I try and slow down my puffing rate, it still manages to cross my tongue with a burning finish that reminds me of dried chili pepper seeds. The technical performance has varied across the three samples, with the draw ranging from very good to a bit tight, combustion from decent to struggling, and smoke production from average to just below. The Ramón Allones Hermitage ER Rusia feels like it's suffering from the Goldilocks syndrome, except without there's no payoff where one cigar was just right. While each one didn't stray too far from some common flavors, the variance in the sharpness of the pepper and the draw definitely had an effect and left me wondering just how the next one would smoke and taste like. There is no doubt this is a young cigar that shows its youth and lack of development, with any seasoned cigar smoker immediately recognizing that some time in the humidor is not just warranted, but needed. With that said, however, it was still fairly good and leaves me hopeful that it will evolve into an above average smoke that eschews some of the negative stereotypes that the Edición Regional program has accumulated.