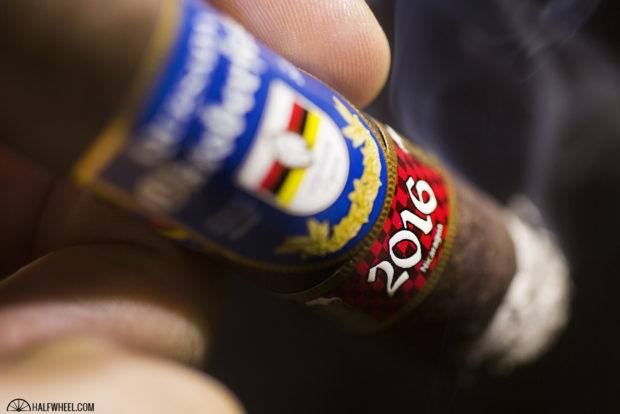 Six years ago, Quesada had two pretty radical ideas. First was the Casa Magna Domus Magnus, which debuted in some radical sizes. The other was the Quesada Oktoberfest, which debuted in two sizes, though most people only remember a 6 x 65 parejo known as The Über.

At the time, the popularity of 7 x 70s was still a couple years away and as such the massive 6 x 65 size was seen by many, yours truly included, as just too big. Now in its sixth year, the Quesada Oktoberfest has 18 different vitolas made in two different countries and technically three different locations as the line was originally produced at Quesada’s old factory before the company moved in 2012. This year the company added two new sizes to the line, including the Triple Bock, a 6 x 56 version of the Double Bock which debuted last year. The cigars are Nicaraguan puros packaged in 24-count boxes that are made to look like older German houses. There are a lot of ways to tell the cigars apart, including the secondary bands, the size and the roof of the box, which is blue for 2016 instead of black. I rather like the red secondary band on this release; perhaps it’s just the switch from the sea of blue, but I think it accentuates the dark, veiny wrapper pretty well. Aroma off the Nicaraguan wrapper has lots of chocolate gelato and some slight hints of manure. The foot is unique, smelling like a bourbon barrel-aged milk chocolate stout with notes of oak barrels, chocolate and lactose. There’s another oak flavor that separates from the larger beer note, which creates an odd sensation. The cold draw has cocoa, orange peel, chocolate bar and black licorice, all around the medium level.

All three Triple Bocks begin with the same open draw, which isn’t ideal. Flavor-wise, there’s toastiness and a mild earthiness—and that’s it. Unfortunately, the draw seems to be affecting the smoke production, which is odd given there is a full on campfire of smoke coming from the foot of the cigar. Fortunately, the flavor profile gets much better with pecan ice cream, burnt butter, a smooth toastiness and a watered down hot chocolate note. One cigar has some soggy french fries, though all three cigars have a bold toastiness. Flavor is medium-plus, strength is medium and body is medium-plus. A spice emerges on the lips of this Nicaraguan-born Oktoberfest, but the bigger trend is the earthiness which is now front, center and whatever space on the map of my palate is left. There’s a red and green pepper mixture on the tip of the tongue, but it’s contained and mild. On the finish, a big creaminess emerges with some sawdust, though it’s not enough to overtake the earthiness. Strength has picked up to medium-full, but otherwise things remain the same, including the very loose draw. I’m a bit surprised taking retrohales in the final third of the Quesada Oktoberfest Triple Bock. All of a sudden, the cigar becomes substantially more intense. It’s more overpowering than harsh and delivers some detailed flavors of grapefruit and bitter bread. In one way, it’s a break from the earth party that’s continuing in my mouth; on the other hand, I can’t take more than a handful of retrohales in the final third. In addition to said earthiness is some smooth cinnamon, Ritz crackers, white pepper and a distinct finish of latte coffee. The definition of insanity is...well, we all know it. From its debut, I’ve found the Quesada Oktoberfest to be an exercise in too much earthiness and it turns out, a Nicaraguan version didn’t change that. The Oktoberfest Nicaragua is a big, flavorful cigar with one issue in the Triple Bock size, a draw that was too loose, even for 56 ring gauge.