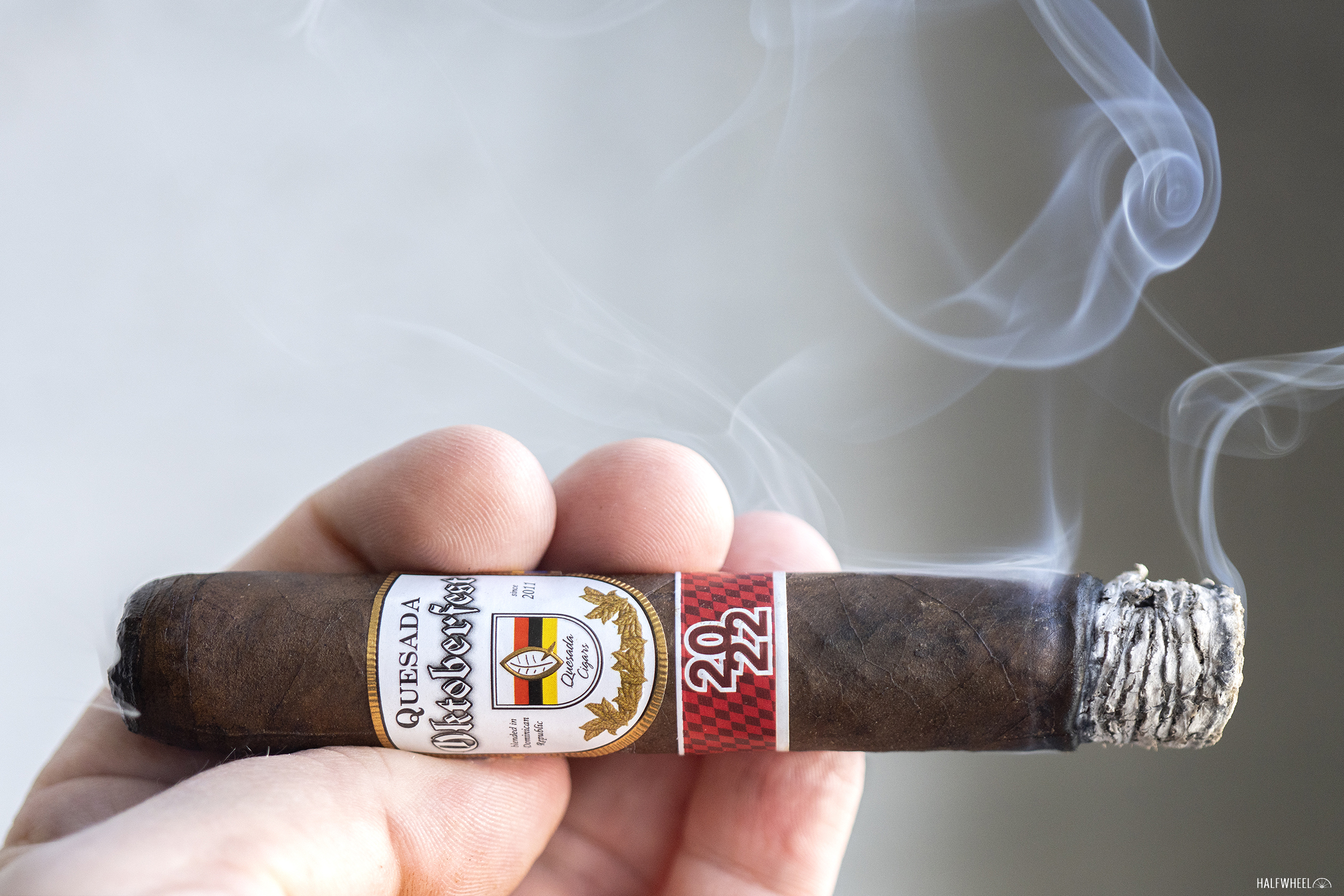 In 2011, Quesada Cigars launched what has now become one of the company’s longest-running series: Oktoberfest. Considering it is named after the annual beer festival that takes place in  Munich, Bavaria, Germany, it is perhaps no surprise that the Oktoberfest blend was specifically designed to be paired with Märzen-style beer, which happens to be the style of beer that is traditionally served during the Oktoberfest event.

From the first two debut sizes more than 10 years ago, the line has grown to include more than 30 different releases, including some interesting additions like the 9 x 60 The Marshall, the Flying Pig-esque Das Brauhaus and the extremely unique Salomon Press, the latter of which “symbolizes the geography of the fertile Cibao Valley of the Dominican Republic, which lies between the mountain ranges of the Cordillera Septentrional and the Cordillera Central on the north and south respectively.”

During the 2022 PCA Convention & Trade Show, Quesada showed off the newest additions to the Oktoberfest line, three of which were the same sizes and blend as those released for last year’s 10th Anniversary Oktoberfest. That blend is made up of a Mexican San Andrés wrapper covering a Dominican binder and filler tobaccos grown in the Dominican Republic, while the specific vitolas are the 5 1/2 x 52 The Bavarian, the 6 x 52 Das Boot and the 6 x 65 Über.

However, there was one major difference when comparing this year’s additions to those included in the 2021 release: the Prost, a 5 1/2 x 56 vitola, that is an exclusive to CIGAR.com’s Elite Advantage program, a loyalty program. Quesada told halfwheel that 300 bundles of 10 cigars in that vitola were offered to Elite Advantage platinum members.

“I am extremely pleased with the 2022 Oktoberfest,” said Manuel “Manolo” Quesada Jr., president of Quesada Cigars, in a press release. “It’s a blend made for this release, and I am certain it will please all smokers with or without beer.”

There have now been more than 30 different releases in the Oktoberfest line:

The Oktoberfest 2022 is made at Quesada’s Tabacos de Exportación factory in the Dominican Republic and boxes began shipping to retailers in early September. 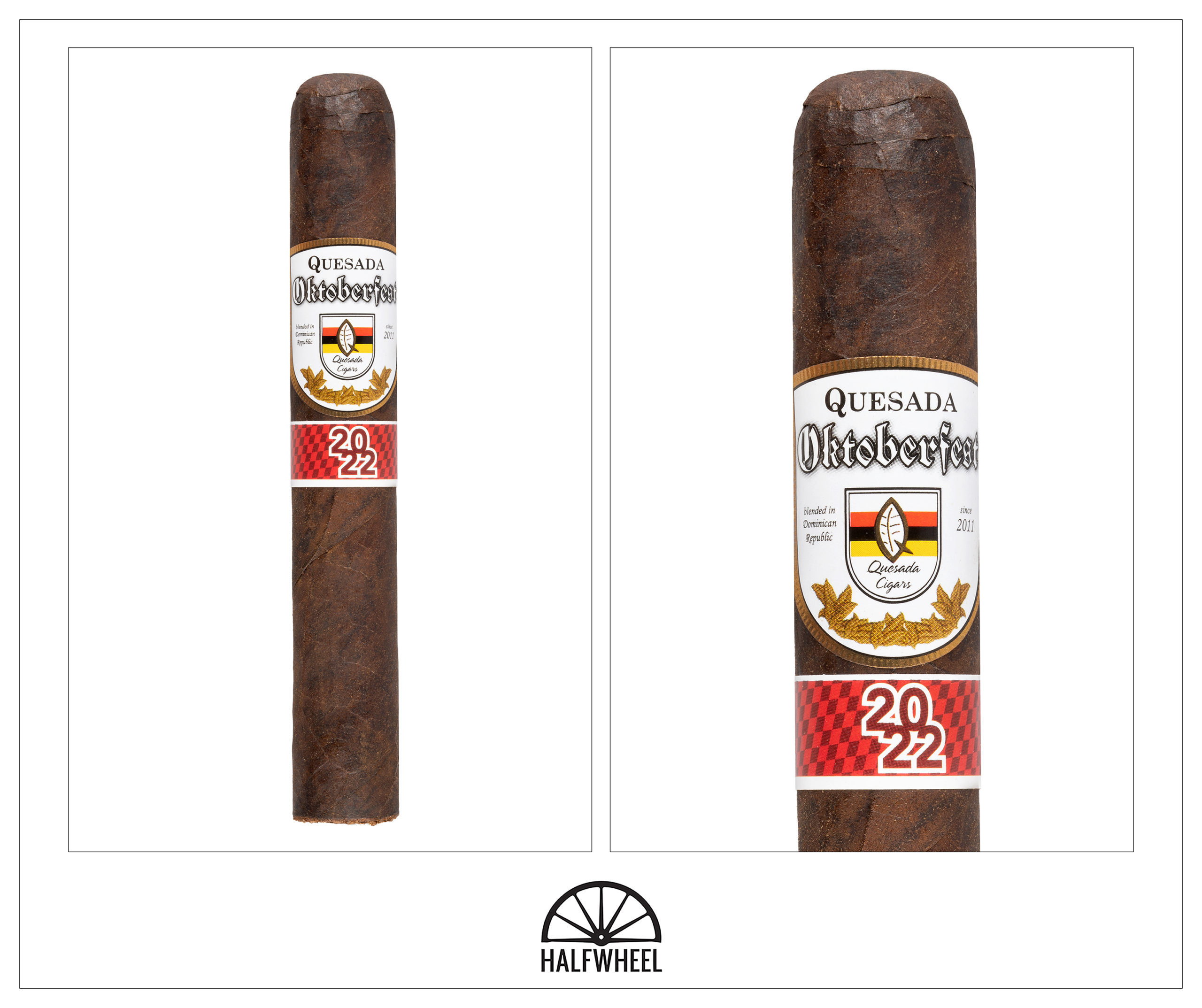 Covered in wrappers that are nearly dark as coal, all three Quesada Oktoberfest The Bavarians feel heavy and substantial when held in my hand. That wrapper is rustic and sandpaper rough to the touch, although there is some noticeable oil present as well as a number of protruding veins. The aroma from the wrapper is quite obvious, with sweet earth taking the top spot followed by cinnamon, generic nuts, leather, baker’s spices, oak and roasted coffee beans. The foot brings similar notes—although charred oak takes over the main aroma—with earth, peanut shells, espresso beans, pepper and cinnamon all vying for attention. After a punch, the cold draws of all three cigars include strong oak and earth, followed by leather tack, cocoa nibs, espresso beans, peanuts, black pepper and a slight sweetness that reminds me of black licorice.

A combination of black pepper, oak and earth greets me as I toast the foot of the Quesada, along with an aggressive spice on my tongue that does not seem to be going anywhere anytime soon. After about five puffs, it is obvious that the oak flavor is going to be one of the main notes in the profile, although a new anise flavor is not far behind. Additional notes of gritty earth, leather, powdery cocoa nibs, plain white rice and charred meat flit in and out at various points, while the retrohale is chock full of both black pepper and an intriguing floral sweetness. Flavor starts off slightly above medium, while the body is at a solid medium and the strength is below the medium mark. In terms of construction, all three cigars give no issues whatsoever when it comes to the burn lines, the draws or the smoke production.

While the oak flavor remains a major part of the profile during the second third, it is replaced at the top by a very enjoyable charred meat note that seems only to be getting stronger as the burn line progresses past the halfway point. The spice on my tongue has increased compared to the first third—albeit only slightly—while secondary flavors include the aforementioned earth, dark chocolate, cinnamon, sourdough bread, roasted coffee beans and slight citrus. There is a fairly significant change in the retrohale, where the floral sweetness has been completely replaced by a wonderful flavor that reminds me strongly of orange slice candy I used to eat as a kid. Flavor has bumped up slightly to medium-full, while the body and strength meet together at a solid medium. Construction-wise, although the smoke production and draws continue to be excellent, one of the cigars runs into a bit of trouble and needs some attention with my lighter to avoid larger issues. The final third of The Bavarian features the same charred meat note as the main flavor, but it is now joined by an espresso bean note that replaces the oak from the second third. That combination is followed by toasted bread, cocoa nibs, leather tack, peanut butter and earth, along with a small amount of citrus peel. Thankfully, there is virtually no change on the retrohale, which continues to feature a wonderful combination of black pepper and orange slice candy sweetness. Flavor ends the cigar firmly in the full range, the body bumps up to medium-plus while the strength ends up at a point just over medium. Finally, there continues to be no issues whatsoever with the draws or the smoke production, but one cigar needs a touchup to keep on track, albeit a different cigar than the one that had issues in the second third. Through the years, I have not been the largest fan of the Oktoberfest brand, mainly due to its tendency to be a linear blend dominated by earthy flavors. However, The Bavarian is quite a bit different from most of the other cigars I have smoked in the line, mainly due to the combination of main flavors that shift from oak and anise in the first third to a distinct charred meat note in the latter half. In addition, the floral sweetness in the first third that morphs into orange slice candy on the retrohale are flavors I have never tasted in any of the Oktoberfest cigars before, and they are welcome additions to the profile. Throw in the very good construction on all three cigars—I only two needed minor corrections with my lighter—and you are left with one of the best Quesada Oktoberfest releases to date.