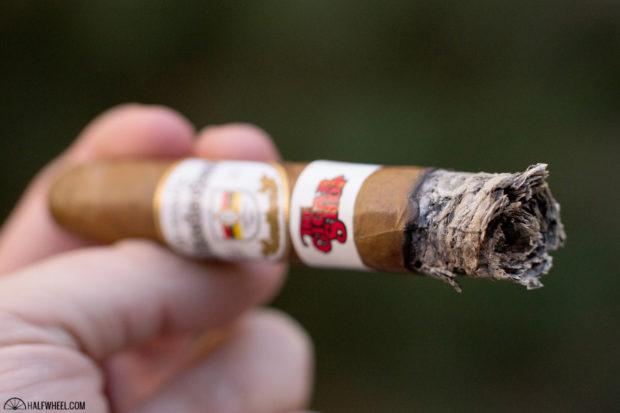 Since 2011, Quesada has celebrated Oktoberfest with a cigar release designed to pair with the dark, märzen-style beer that is so closely associated with the event. In the six years since that first cigar’s release, the line has gown quite a bit, including by way of store exclusives.

This year, The Cigar Shop, which operates stores in Monroe, N.C. and Myrtle Beach, S.C., received the latest retailer exclusive, the Bayern, a pyramid shaped vitola with a slightly tweaked version of the Dominican puro blend.

The shape is by far the most distinctive part of the cigar prior to lighting, though the initial taper is so subtle it would be easy to mistake this for a standard toro, given its six inch length. At its thickest, the Bayern is a 60 ring gauge, though that quickly tapers to a 58, before becoming a 51 ring gauge near the head, which has a much more rounded shape than you’ll find on many pyramids, almost resembling the 109 vitola a bit due to its rounded shoulders though the head is much less pronounced.

Its shape should be recognizable to those familiar with Quesada’s portfolio, as it is based on the Fonseca Triangular. 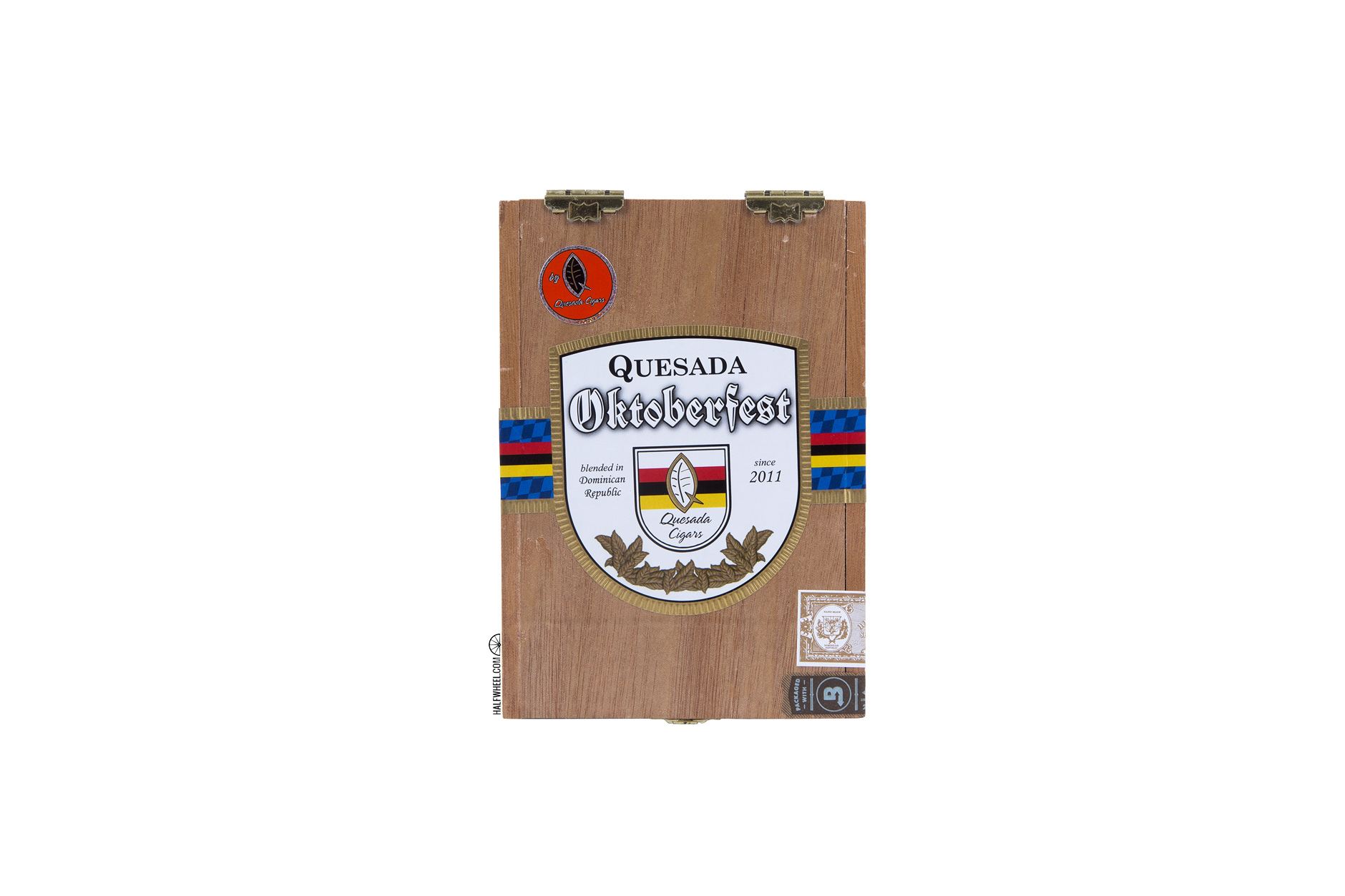 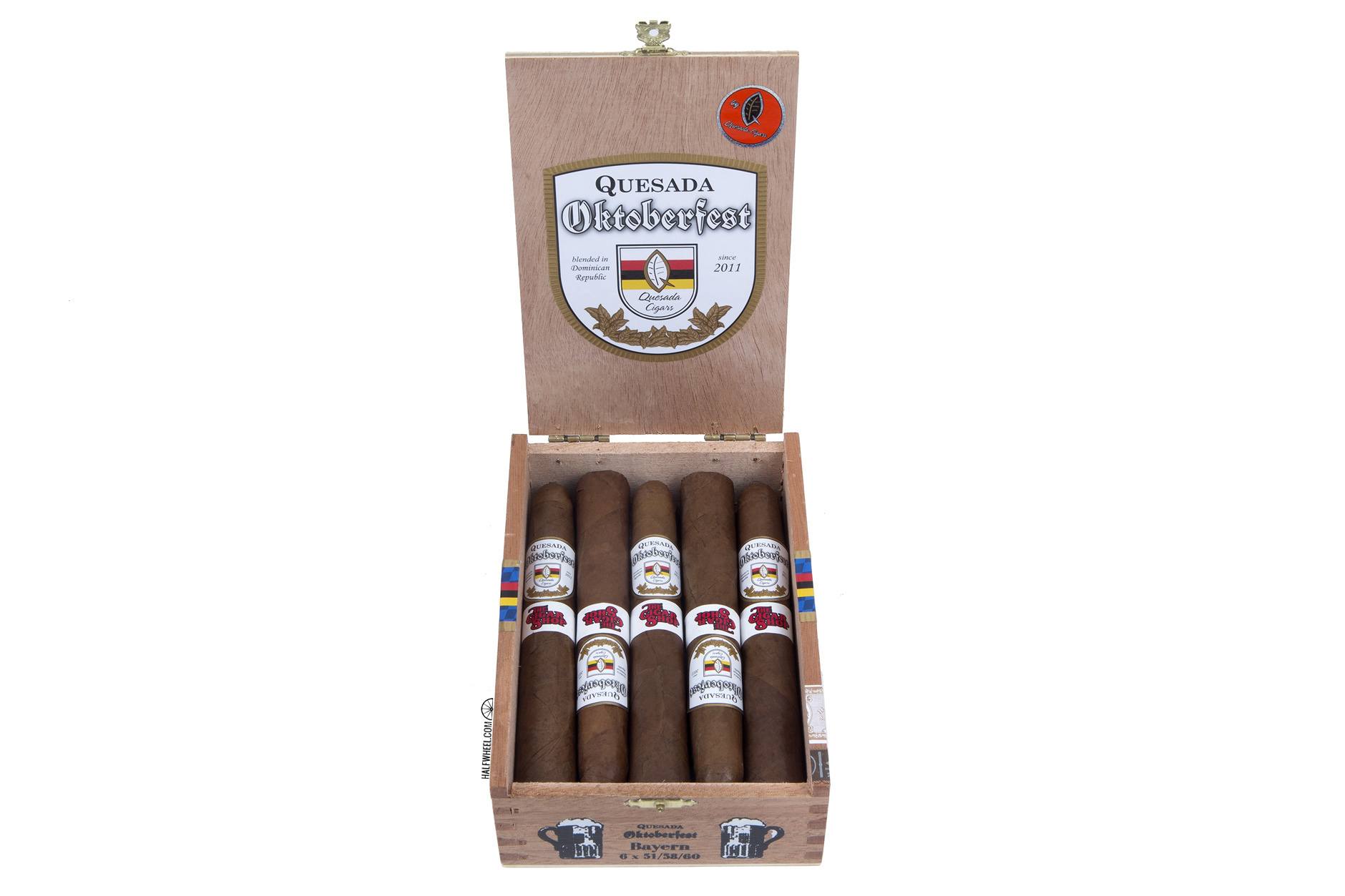 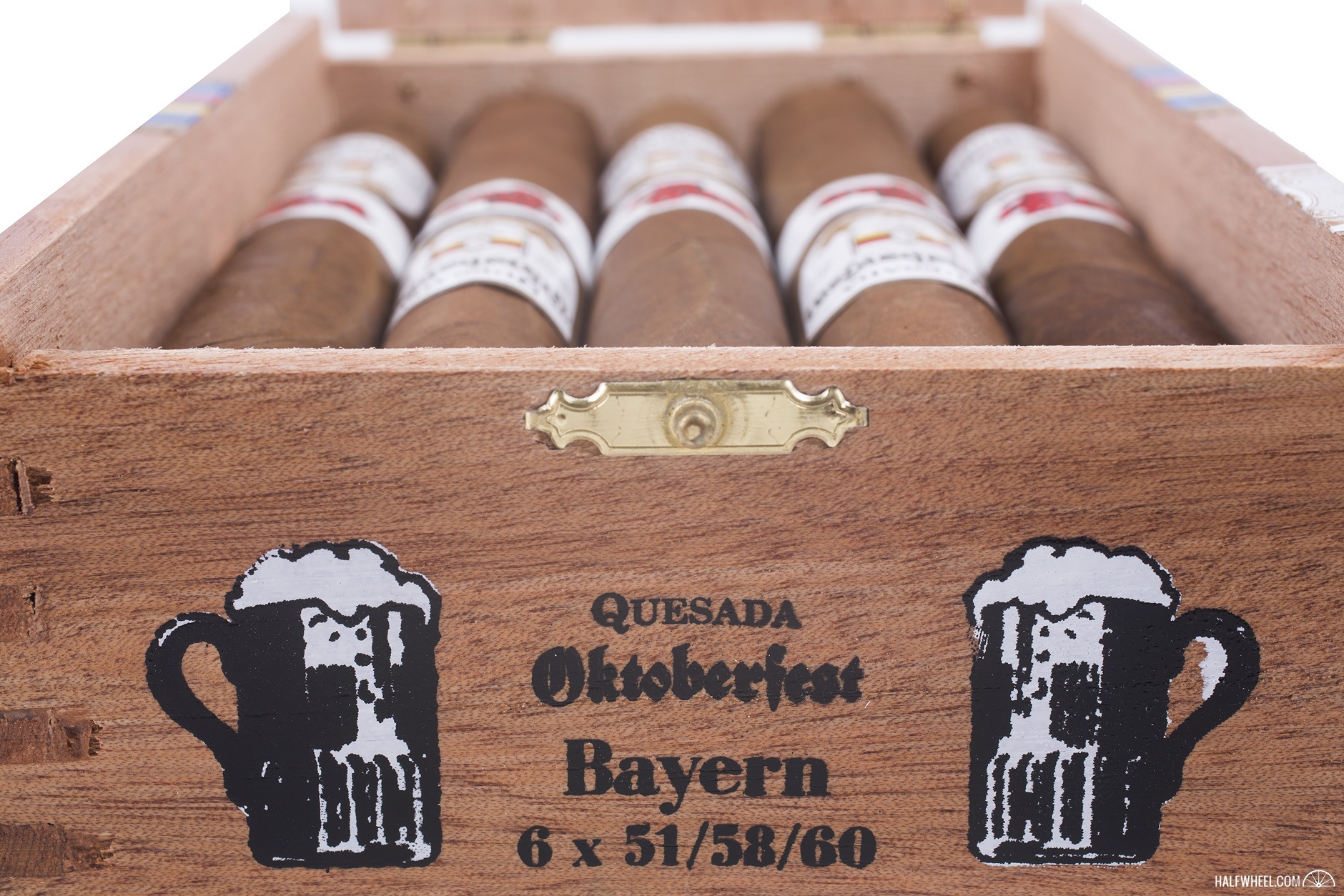 “The Triangular has been such an iconic vitola that has such as rich history,” said Mark Boley, co-owner of The Cigar Shop, in a press release at the time of the cigar’s announcement. “The Oktoberfest has been an enormously popular line with our customers and now we have an opportunity to bring the Triangular size to this great line. It’s going to make this year’s Oktoberfest celebrations even better.”

Production is limited to just 200 boxes of 10 cigars, with each stick priced at $8.97, before taxes. It joins the other six sizes for 2017 that got a widespread release, all of which have appeared in previous years. It’s the 19th vitola for the line. 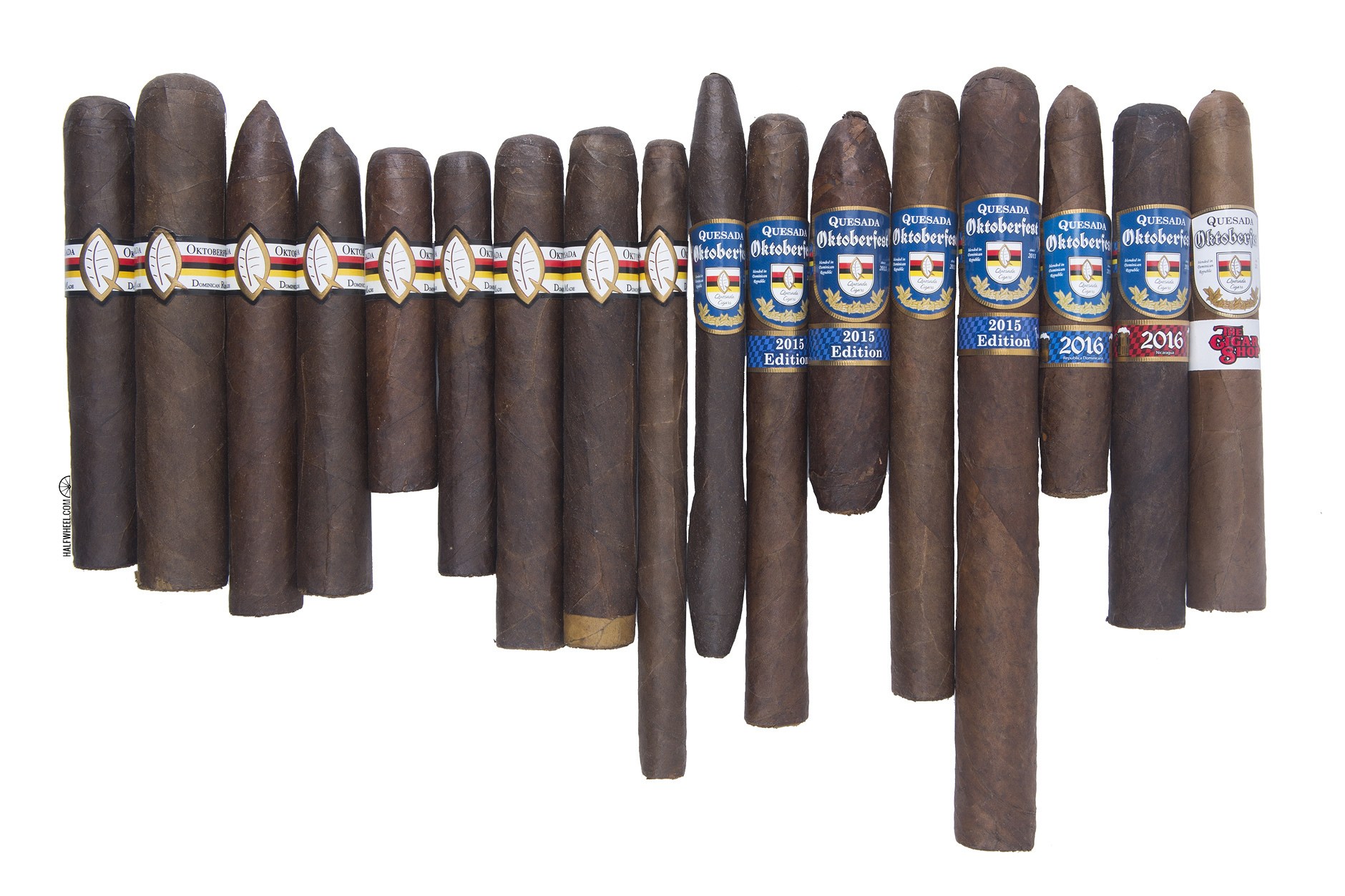 The Bayern and the first four sizes are Dominican puros that are made in the Dominican Republic by Quesada, while the Das Brauhaus and Triple Bock are Nicaraguan puros made by Plasencia in Nicaragua. 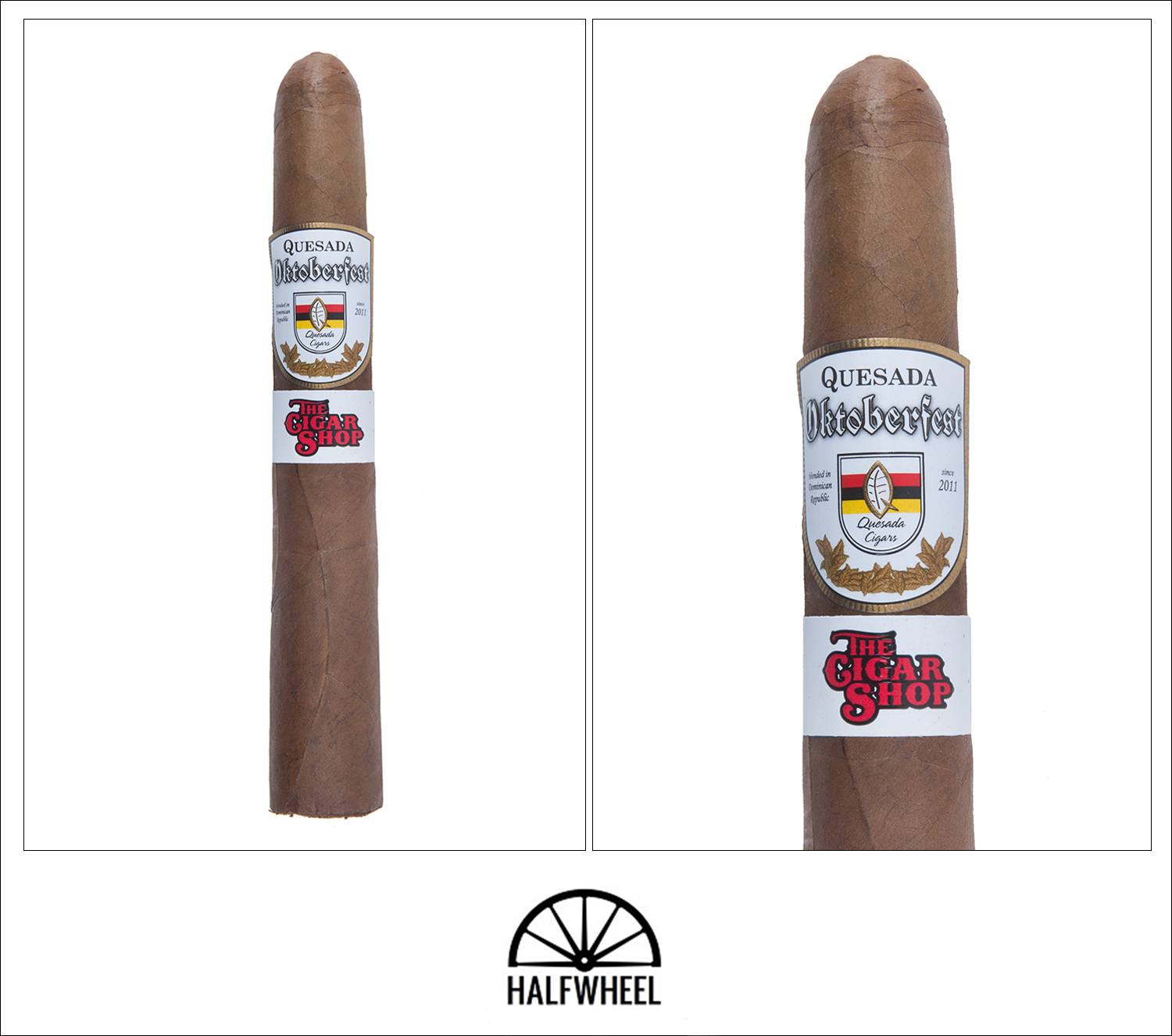 As I mentioned above, I found the flared cylinder easy to overlook, particularly at the foot, and when reaching for this out of a plastic bag, assumed it to be a standard if slightly beefy toro. I’m not quite sure if this was attributable to me being in a bit of a hurry at the time or the two bands helping to mask the taper, though an honest look at the cigar quickly shows that it is a figurado. It has a generally firm roll, although I find a few soft spots, with one near the head of the second sample a bit concerning. Visually it’s good if unremarkable with a standard vein structure and even coloring of the well-tanned leaf. The cap on each cigar looks a bit off, almost as if it was supposed to have a pigtail but got aborted during the process, though I’m inclined to think it was just part of the normal process given its consistent appearance. The Bayern has a very light and creamy pre-light aroma, almost like a bowl of Cheerios and cold milk based on the sweet creaminess and cereal grains, with certain samples offering vanilla extract and sweet cedar as complementary notes. The cold draw is excellent as far as air flow, and neutral with a a bit of candy cane sweetness in the flavor. What is most noticeable is how the cigar is end-weighted and thus makes it feel a bit out of balance in the mouth.

The first puffs from the Quesada Oktoberfest 2017 Bayern are a bit on the thin side of the texture scale and have me thinking of unsalted, baked pretzels. There’s just a bit of very light, white pepper to be found it would be rather easy to overlook depending on your mood or what you were drinking. the cigar pumps out a good bit of smoke in the first inch. The quantity seems to diminish at the ring gauge starts to shrink, and it seems to get wispier and less willing to stick around, though that could be due to the very slight breeze in the air. Try as I might, the Bayern doesn’t want to burn evenly on the first sample, requiring a quick touchup, with a bit of flowering of the ash happening thereafter. The profile stays fairly rooted in cereal grains, though I get more Frosted Flakes than Cheerios as the first third comes to a close, though that quickly shifts again as a heaping of black pepper gets introduced and punches up the retrohale quite a bit. 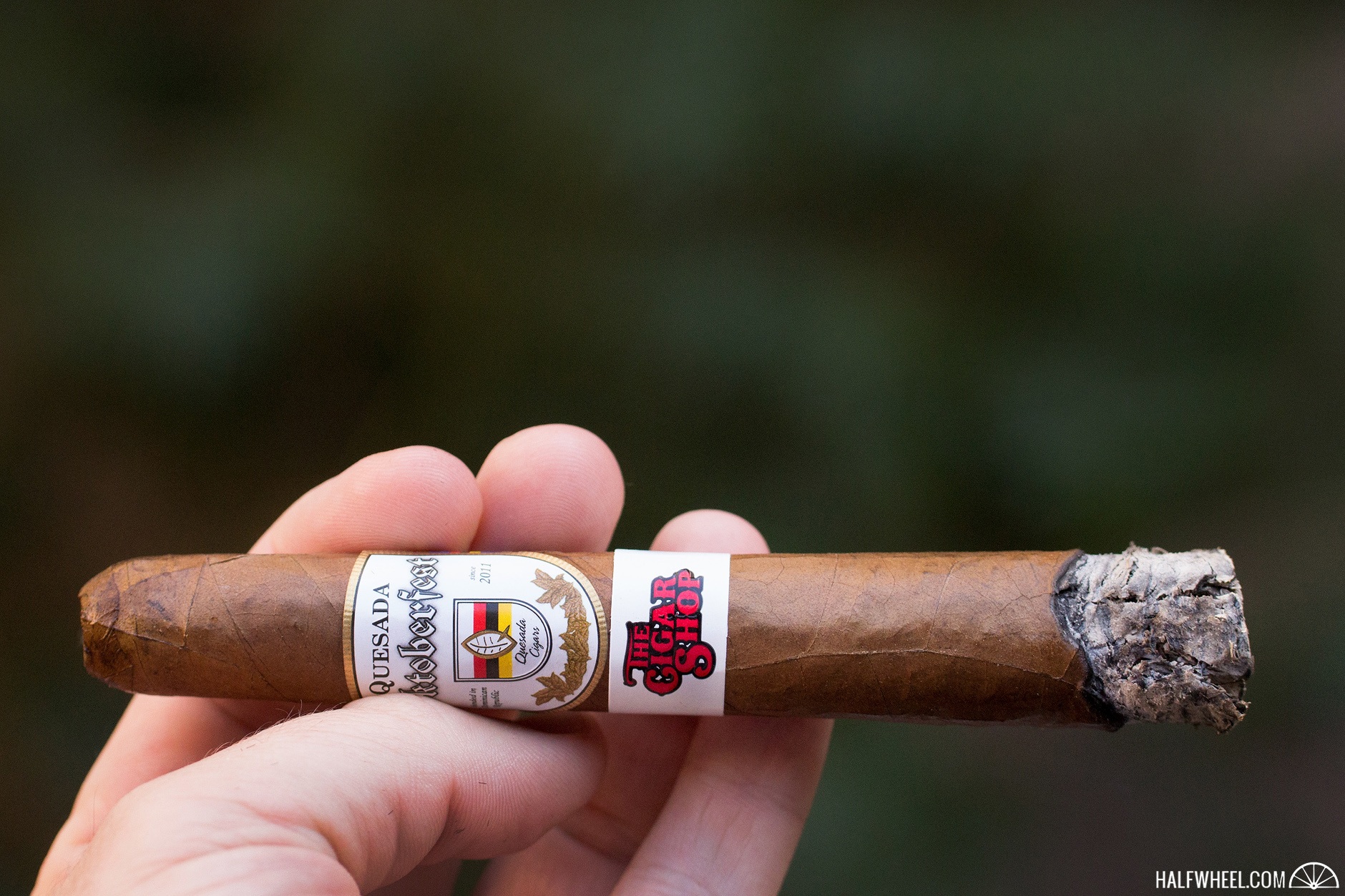 While the second third of the Quesada Oktoberfest 2017 Bayern is more pepper forward, I don’t find it to be that much more overpowering on my palate or through the nose, and nicotine strength comes across minimally, if at all. The sweetness is diminishing a bit as more of the dark gray ash builds in advance of the midway point, and by the halfway mark it’s gone almost completely, replaced by a rocky, peppery, and earthy base note that is a departure from where the cigar started. The aroma of the cigar takes the lead in the race for most appealing aspect of the cigar, as it has returned some of the Frosted Flakes sweetness that the flavor shed, though it is much thicker and concentrated without becoming syrupy, thanks to warm cake donuts and a bit of black pepper. While I’m not opposed to the cigar getting fuller, I have a hard time saying it was needed, as if anything I was hoping for more complexity rather than more strength after the first half. With this new development, the mouth gets much more of a tingle with each puff, and I find a bit of irritation emerging towards the back of my tongue and into my throat. 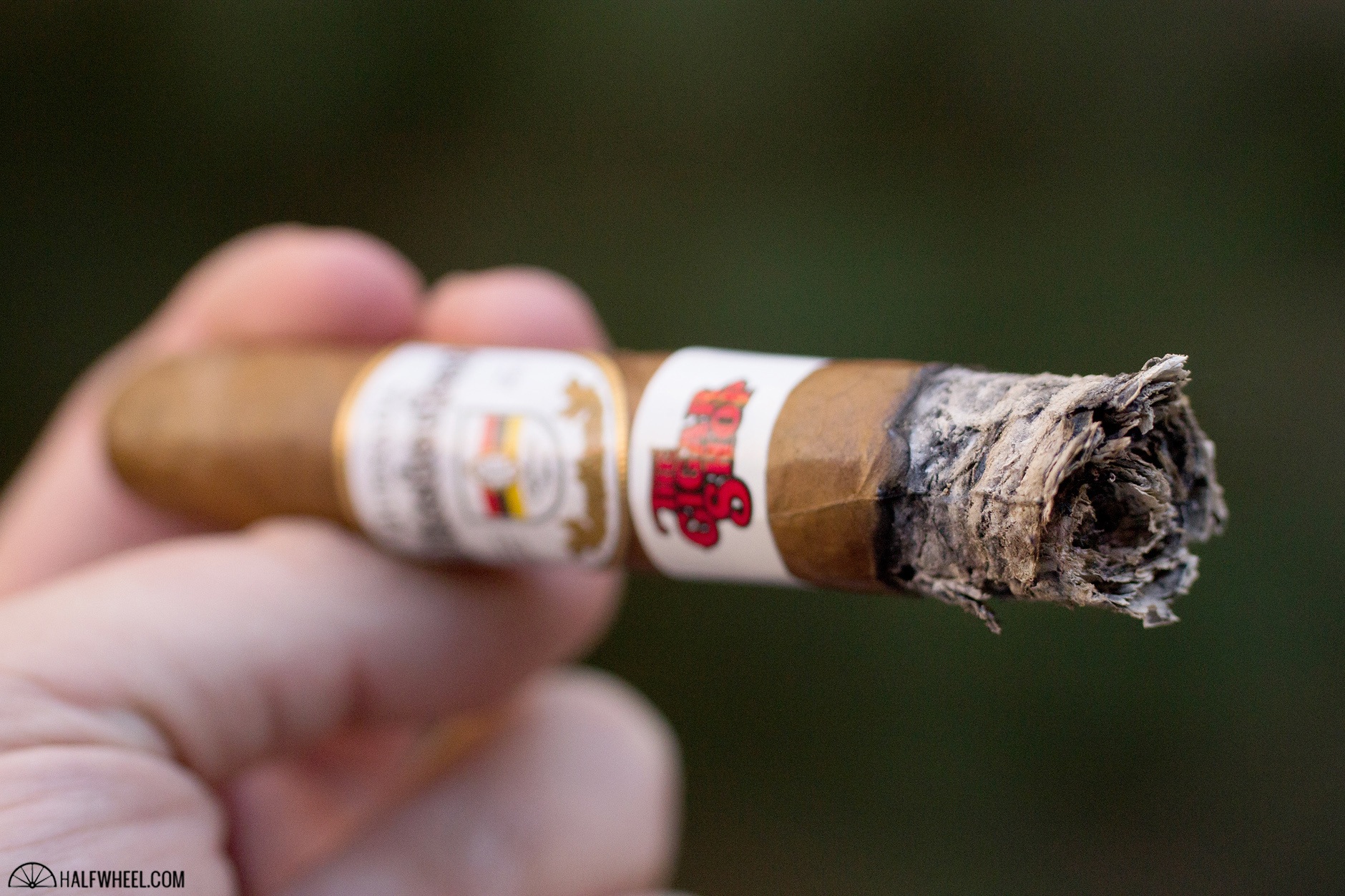 Just as I was becoming acclimated to the new profile of the Quesada Oktoberfest 2017 Bayern, it softens a bit entering its final third as I get traces of creaminess trying to emerge from the heavier notes, with more manifesting in the aroma by way of a freshly made glazed donut. There’s still a good bit of pepper to be found, particularly in the retrohales, but it is a bit more restrained than it had been earlier, leaving less irritation in its wake. The burn line continues to struggle, and I find myself knocking off shards of ash as opposed to clumps, though thankfully no more touchups are needed. With the cigar nearing its completion, I find it struggling to bring the flavor profile together in a tidy package as some of the irritation lingers, the sweetness and pepper seem at odds, and a woodiness that has developed is quite good yet pulls things in yet another direction. This is definitely a cigar where I preferred the profile when the ring gauge was at its biggest, as it provided both the most flavorful and most complex expressions of the blend. 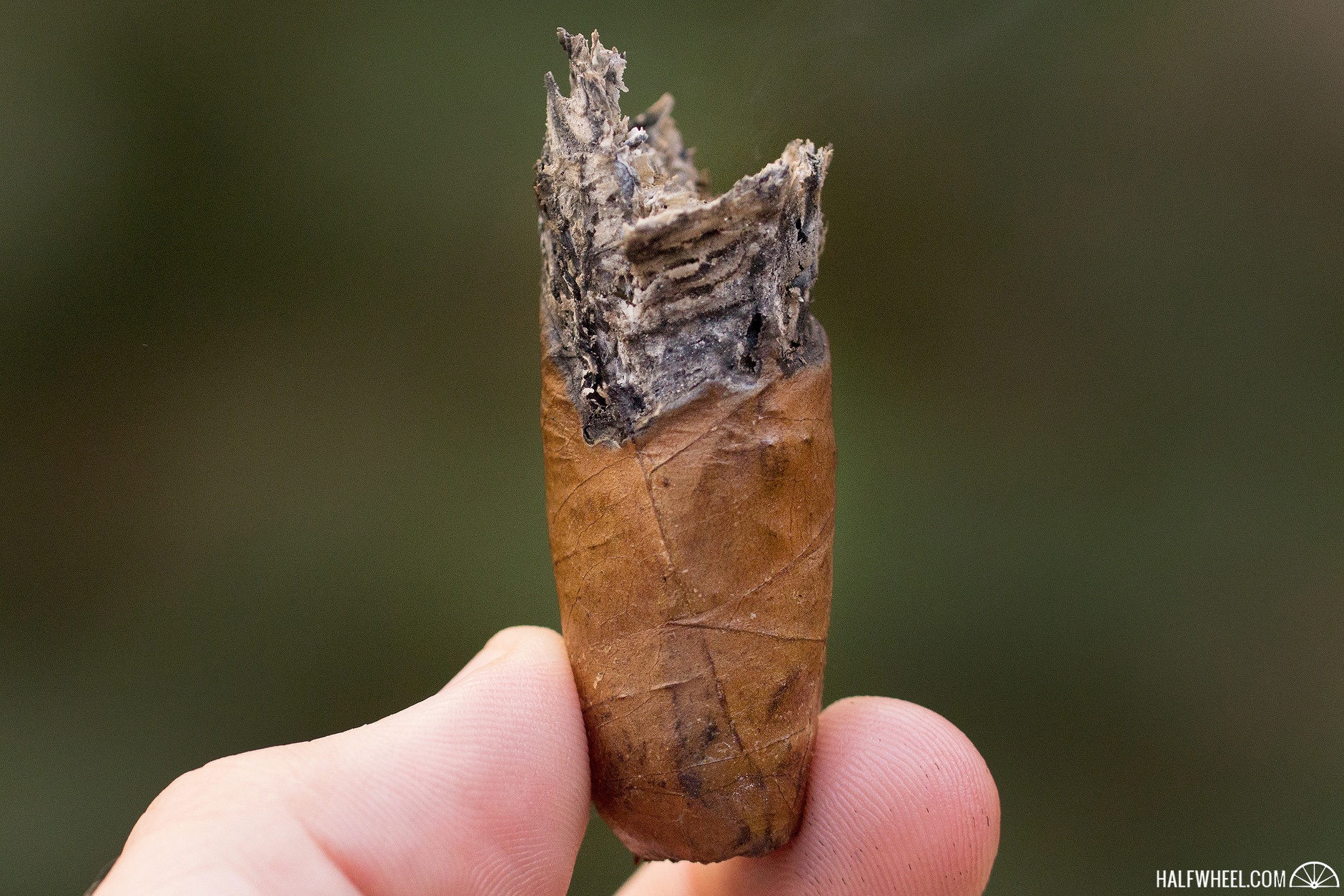 If you’re looking for a lot of flavor changes from a cigar, the Quesada Oktoberfest 2017 Bayern certainly offers that, though I have to say it’s not always for the better. The cigar shines fairly brightly in its first third, develops a solid core and peppery top note in its second third, and stumbles trying to bring them all together in its final third. Not only that, it fails to produce the enjoyable and quite palatable experience that the first half of the cigar delivered. Give me the first half of the Quesada Oktoberfest 2017 Bayern any day and I’d be a happy man, just don’t make smoking the second half part of the deal.