If there’s one trend in the cigar industry that has taken off in recent years, it’s creating limited edition releases for almost every holiday on the calendar. We have cigars with themes that draw on Halloween, Thanksgiving, Christmas, 4th of July, and several that are inspired by one of my personal favorites: St. Patrick’s Day.

Last year Quesada Cigars jumped on the St. Patrick’s Day bandwagon with the release of the Quesada Keg Edition, a single 6 x 50 toro vitola option packed in wooden kegs with a big green shamrock on top that clears up this isn’t designated for the nearest frat party, though they are designed to be paired with an Irish stout, with a blend of a Pennsylvanian broadleaf wrapper and Nicaraguan binder and filler. Just 250 kegs, each containing 21 cigars, were produced for that debut edition. The band also got updated from the fairly generic one used in 2015 to one that has much more thought and design put into it and resembles the Guinness beer logo. 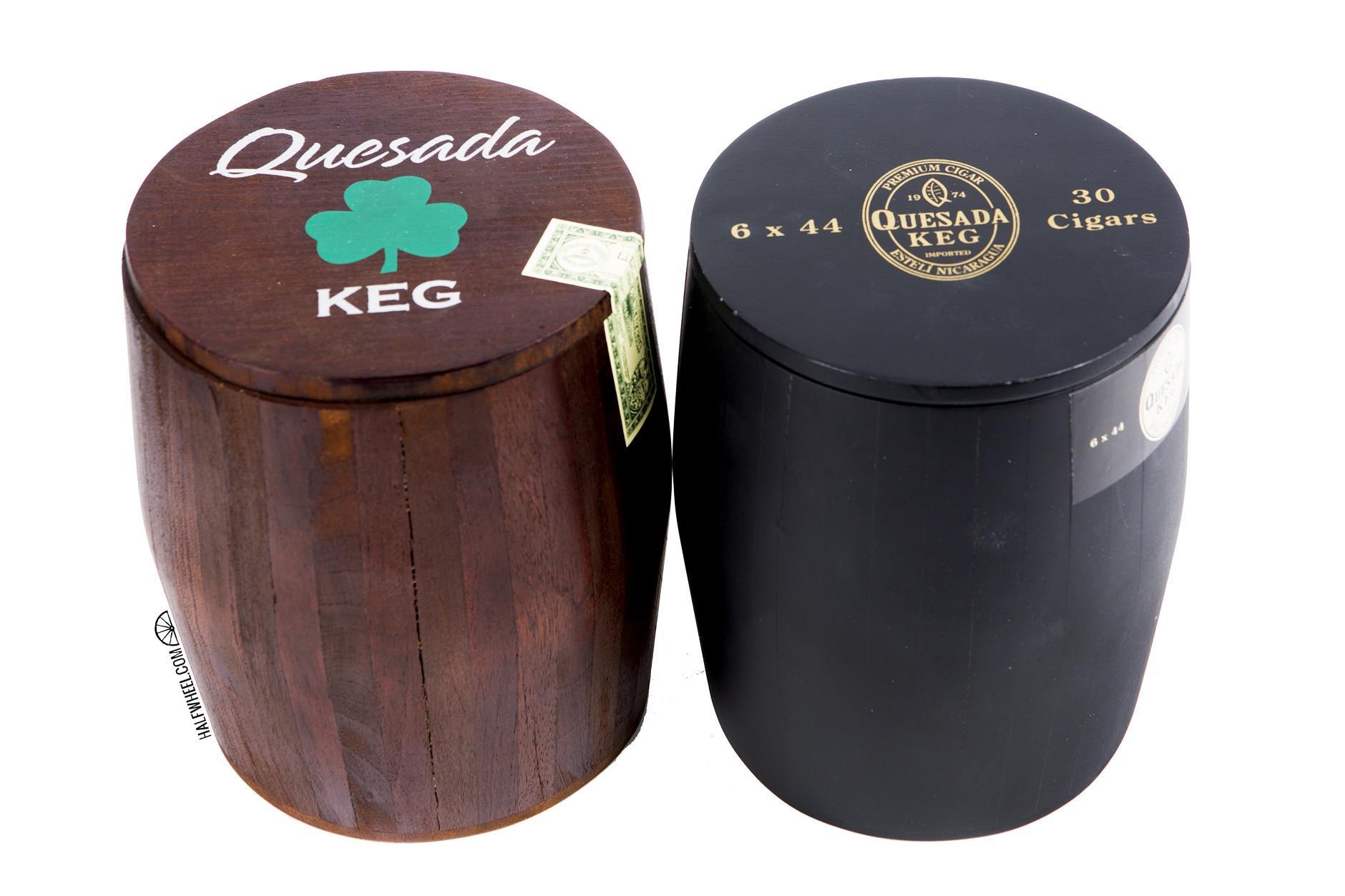 Finally, production was increased to a total of 1,000 kegs, split up between 500 kegs of the toro vitola and 250 each for the lonsdale and toro gordo. Those kegs also got a rework as well, adding the new logo to both the front and the lid, which also denotes the size and number of cigars inside. Terence Reilly, general manger of Quesada Cigars, said that despite the upgrades in packaging and increased cost of tobacco, the toro size retains the same price as it had last year, while the other two vitolas are comparably priced. I love the appearance of the Quesada Keg; the vitola is fantastic, but the standout is the combination of the incredibly dark broadleaf wrapper and the band that looks like an old pub sign. The two combine to give the cigar an old Irish pub feel, which certainly resonates with me. While a generally evenly colored wrapper, there are a few points around some veins where the color lightens up a bit, giving the cigar the feel of old, weathered wood, which only further enhances the overall presentation. This lonsdale is a firm specimen, and while it would seem it can take a bit of a squeeze, an audible crack on the first cigar proves otherwise and has me timid about the other rwo. The caps are generally well applied, with one a bit off from the other two, almost a bit too flat and not laying smoothly across the head of the cigar. The prelight aroma reminds me a bit of a chocolate stout, just a touch sweet and creamy with no pepper to be found. The cold draw is just a touch firm and equally creamy, with a faint trace of pepper but a predominantly neutral flavor.

After a fairly neutral first taste of the Quesada Keg save for a bit of chocolate on one sample, the pepper kicks up quite considerably and gets right to work on the tongue. While I don’t want to call the flavors rough, they are a bit hard to embrace as the pepper settles towards the back of the throat. The first clump of ash catches my eye; dense and a fairly dark gray, it holds on well despite a pair of horizontal cracks in the first inch. While the pepper is still brash in the first inch, creaminess begins to emerge, much like the head of a properly poured Guinness, which offers both sweetness and softness on the palate. Touches of Hershey’s chocolate syrup begin to emerge, offering a light coating of what you might put in milk or on ice cream. The ash pulls a bit of an Irish goodbye at about an inch in length, abruptly departing and leaving a slightly uneven burn line behind. The pepper abruptly changes its tone and now heads for the nostrils with a much cleaner and enjoyable presentation, with the back of the throat getting a needed rest and left to enjoy what’s left of the sweet, creamy flavor as it heads into the second third. Combustion has been very solid so far with plenty of smoke production and no touch-ups needed. While I was concerned about how palatable the Quesada Keg Edition 2016 Lonsdale might be after a rough start, the cigar has settled down quite well, offering a fairly thick, almost chewy smoke that has a balanced amount of black pepper in the nose with a bit less for the palate, where a combination of chocolate and soil begun to stand out as a complimentary duo. The draw is just a touch firmer than it was to start, almost forcing slower, more measured puffs. With the cigar firmly settling into a very enjoyable flavor profile around the midpoint, I find myself eagerly awaiting it to take its next step, though it doesn’t seem overly motivated to do so. There are a few points where the pepper moves too far back in the throat and results in a bit of irritation, but it’s minor and fairly fleeting. A bit more of the sweet creaminess returns, while pepper stays present, primarily in the nose. While one cigar needed a relight in this section, the other two burned just fine, with plenty of smoke and an even burn line. The creamy sweetness has been steadily fading away as the final third commences, and while the flavor lulls for just a bit, it’s not long before the black pepper returns with another round for the nose while a heavy, earthy base starts to emerge.There are a few spots where the aroma sees a quick reappearance from the sweetness, though it’s fleeting at best but still very enjoyable. In the final two inches I begin to get a more pronounced wood note, something that I haven’t picked up to this point and which leaves a lingering flavor towards the tip of my tongue and dries the mouth out just a bit. Combustion becomes a bit more an issue in the final inches, but the flavors remain very palatable with an interesting combination of pepper, earth and sweet cream bringing the cigar to its conclusion. 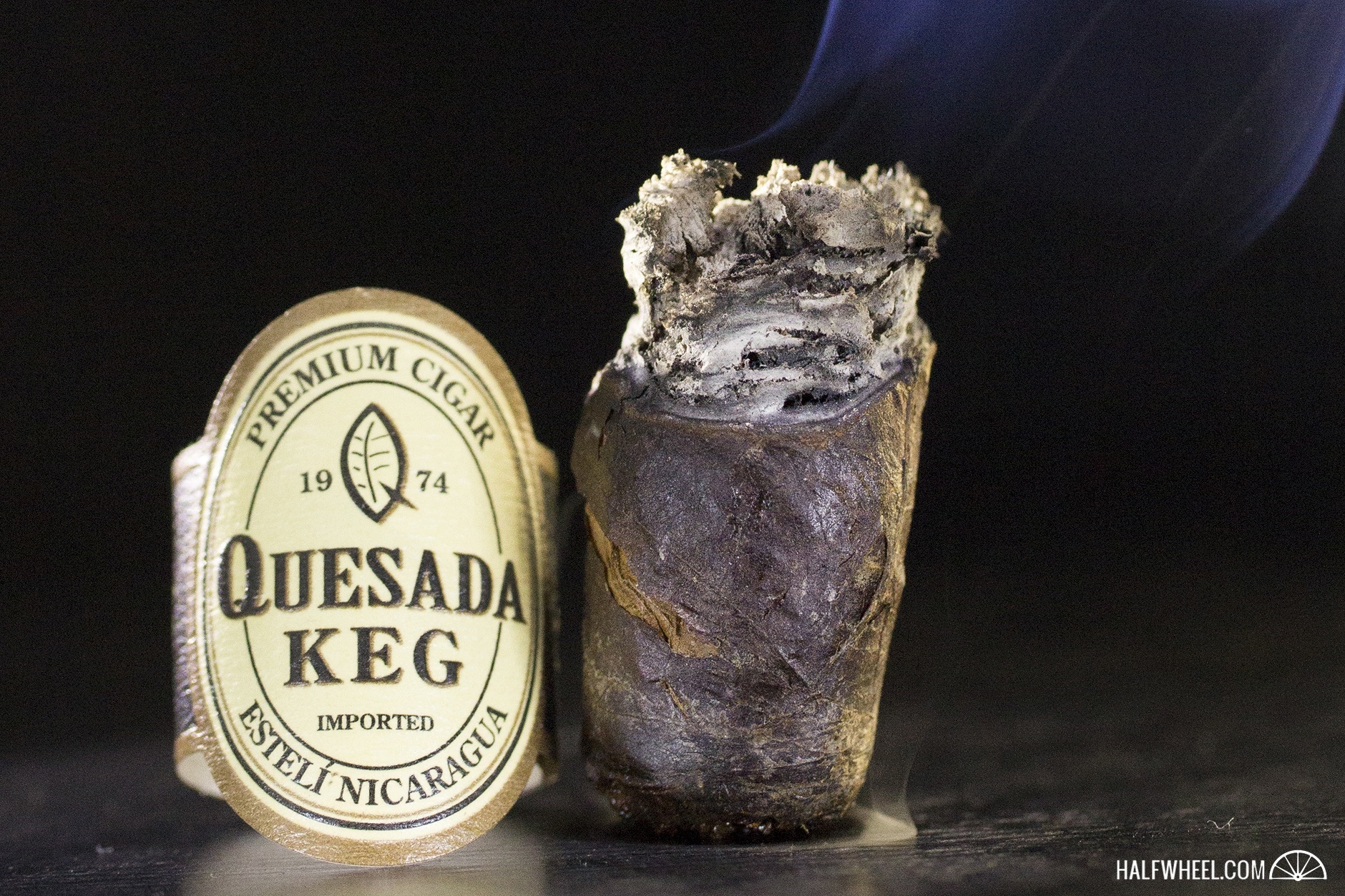 If a cigar doesn’t flat out wow, the next best thing it can do is leave me intrigued, which is exactly what the Quesada Keg Edition 2016 Lonsdale does. I certainly like the overall flavor profile and would be open to smoking more of them, but I’m almost more interested in pairing it up with an Irish stout or some Irish cream to see how the cigar performs in a more complex flavor environment. This year’s Quesada Keg Edition is more than just a one-time cigar to smoke on March 17, it’s a respectable option for any occasion when lighting up a cigar is in order.