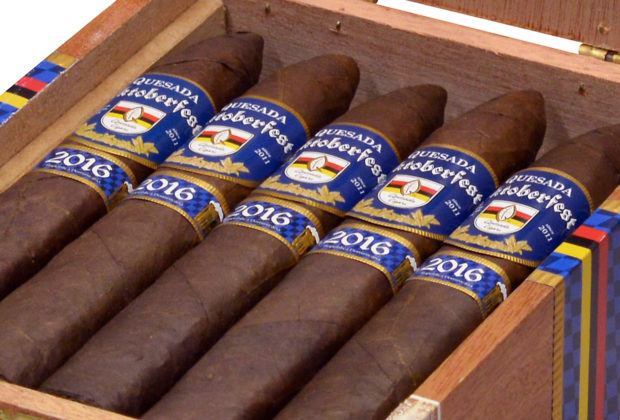 For the sixth year of Quesada Cigars’ Oktoberfest line, the company is introducing two new sizes and a limited run of 100 humidors in the style of a Bavarian brauhaus.

Both the Dominican and Nicaraguan versions of the Oktoberfest are getting a new size. The Triple Bock is a 6 x 56 version of the Double Bock blend, a Nicaraguan puro made by Plasencia Cigars S.A. in Estelí, Nicaragua. Each cigar comes with an MSRP of $9.50 and is packed in 24-count boxes similar to the Das Brauhaus but with a blue roof in place of the red one on that release. 500 boxes of the Triple Bock are being produced.

The Kugel is a 5 x 38/58/44 perfecto that shares a vitola with the company’s Q d’etat Molotov, minus the tobacco coming out of the top. Its name comes from the German word for bullet, while it gets the Oktoberfest’s Dominican blend and comes in 10-count boxes priced at $75, or $7.50 per cigar, with 1,000 boxes being produced at Quesada’s factory in the Dominican Republic.

Both new sizes will begin shipping immediately after the IPCPR Convention & Trade Show, which concludes on July 28. Shortly after the 2016 IPCPR Convention & Trade Show, the company will begin shipping one of the 100 Brauhaus humidors to select retailers, with the humidors to be raffled off in the fall during in-store events. Each unit was handcrafted in the Dominican Republic, individually numbered and can hold approximately 100 cigars. “Each year it gets increasingly difficult to top the previous year’s Oktoberfest promotion, but we are confident these stunning humidors will bring a new level of excitement to our 2016 Oktoberfest events,” said Terence Reilly, general manager of Quesada Cigars in a press release.

Additionally, the company has decided to give a box press to the Das Boot vitola a 6 x 52 belicoso. It will be the second pressed cigar in the line along with the 6 x 49 Kaiser Ludwig vitola.

Quesada is also giving the packaging a slight update, while the Nicaraguan blend will get a different secondary band from the Dominican version. The company will also be offering three-packs of both the Bavarian ($18.99) and Uber ($19.99) sizes, with each pouch containing a Boveda humidification packet.