Early last month, Quesada released a new sampler named the Winter Pack that includes five cigars measuring 4 x 50, each from a different line. Only 2,000 samplers were produced with pricing set at $24.95 each.

“With the winter coming, we wanted to offer a collection of our cigars in small formats since the combination of indoor smoking bans and cold weather make large vitolas more difficult to enjoy,” said Terence Reilly, general manager of Quesada Cigars. 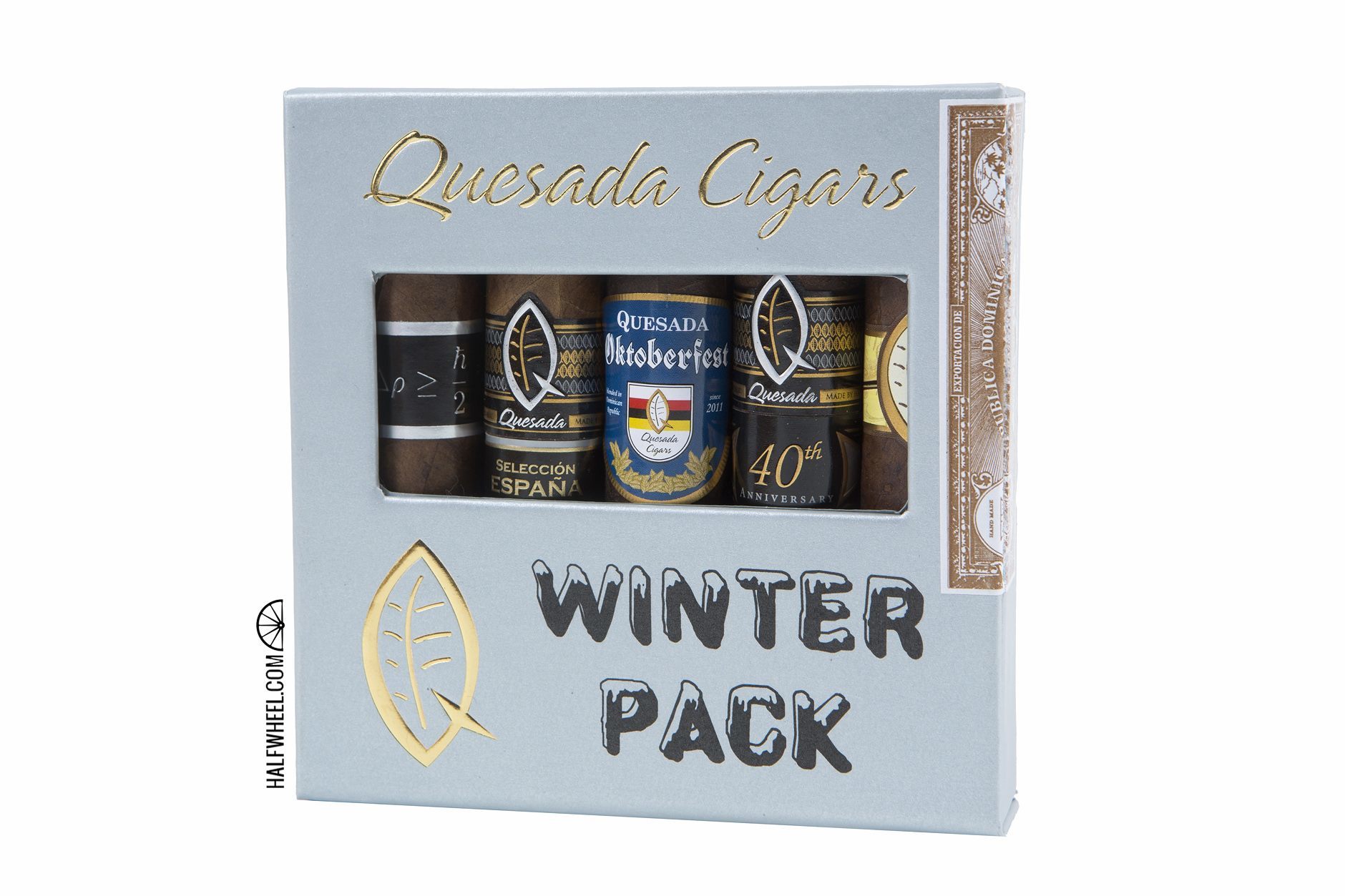 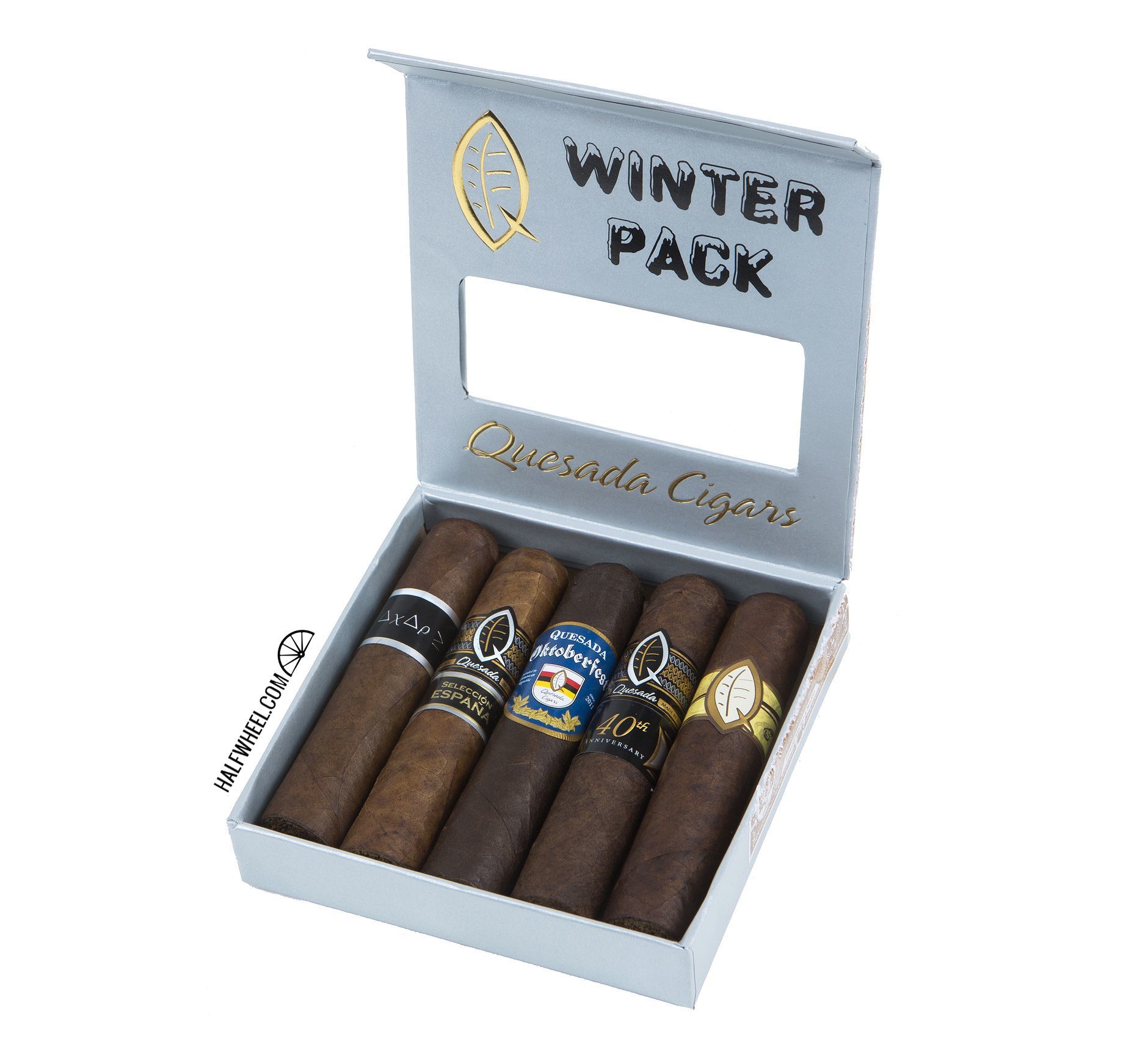 In addition to the Selección España Short Robusto and Oktoberfest Kurz that have already been released the sampler includes three Quesada lines that did not already have a 4 x 50 vitola: Heisenberg, Quesada 40th Anniversary and Tributo.

The Quesada 40th Anniversary line was originally released in March to commemorate Manuel “Manolo” Quesada Jr.’s 40 years in the cigar business and now includes seven vitolas, three of which are regular production and four of which are limited editions. While six of the seven cigars in the line uses the same tobacco, the Corona Clasica release is a “special Manolo” blend, quite different from the rest of the line. The Quesada 40th Anniversary Short Robusto is covered in a dark mocha wrapper that exhibits some tooth to it along with some bumps up and down the length. It has some give when squeezed along with just a hint of oil. Aroma from the wrapper is a combination of peanuts, manure, hay, espresso and slight fruit sweetness, while the cold draw brings flavors of strong wood, hay, dark cocoa, barnyard and leather.

The first few puffs brings a distinct mesquite barbecue note mixed with leather, nuts, espresso and some spice on the tongue. I am also noticing some aggressive black pepper on the retrohale and a very obvious floral sweetness that seems to be getting stronger as the first third burns down. The burn is a bit wavy, but not bad enough to correct and the draw is excellent so far. The smoke production is a bit on the thin side and the strength struggles to reach a point close to the medium mark by the end of the first third. Coming into the second third of the Quesada Short Robusto, and I am tasting an increasing floral sweetness, while the barbecue note I noticed in the first third is quickly diminishing, and is completely gone by the time I reach the halfway point. Other notes of hay, cedar, leather, creamy nuts and bitter cocoa flit in and out, and while the black pepper on the retrohale has diminished, it is still very noticeable. Construction-wise, the burn has evened up nicely, and the draw is still impressive, while the smoke production has actually increased slightly. The strength tries hard and does finally reach a solid medium by the time the second third comes to a close. The final third of the newest Quesada 40th Anniversary has just a touch of the floral sweetness left, although for the most part the flavor has morphed into more of a generic sweetness and is mostly overwhelmed by other notes of coffee, leather, barnyard, hay and creamy peanuts. The amount of black pepper on the retrohale has actually increased noticeably, but the spice on the tongue that was so prominent in the first third is long gone. The burn is razor sharp now, and the draw continues its excellence, while the smoke production stays fairly consistent with the second third. The overall strength stalls out at a solid medium by the time I put the nub down with less than an inch to go. It is possible for the profile of a cigar to be unique without being good, and vice versa. With a combination of barbecue and floral sweetness, the Quesada 40th Anniversary Short Robusto features a profile that I would definitely classify as unique, but for the most part keeps it in check enough to not go overboard with it. While I do think the smallest vitola in the line is better than the other sizes I have smoked, it still does not come close to the Corona Clasica, which is simply a special cigar. In the end, the newest Quesada 40th Anniversary release is a good blend in a great size that is unique enough that I want to smoke it again.