Earlier this year, Quesada announced it would be celebrating its 40th anniversary with a line of cigars called the  Quesada40th Anniversary. The cigars were shown off in March at the annual Procigar festival in the Dominican Republic, an organization Quesada has close ties and an event that has played host to the debut of many of its cigars. 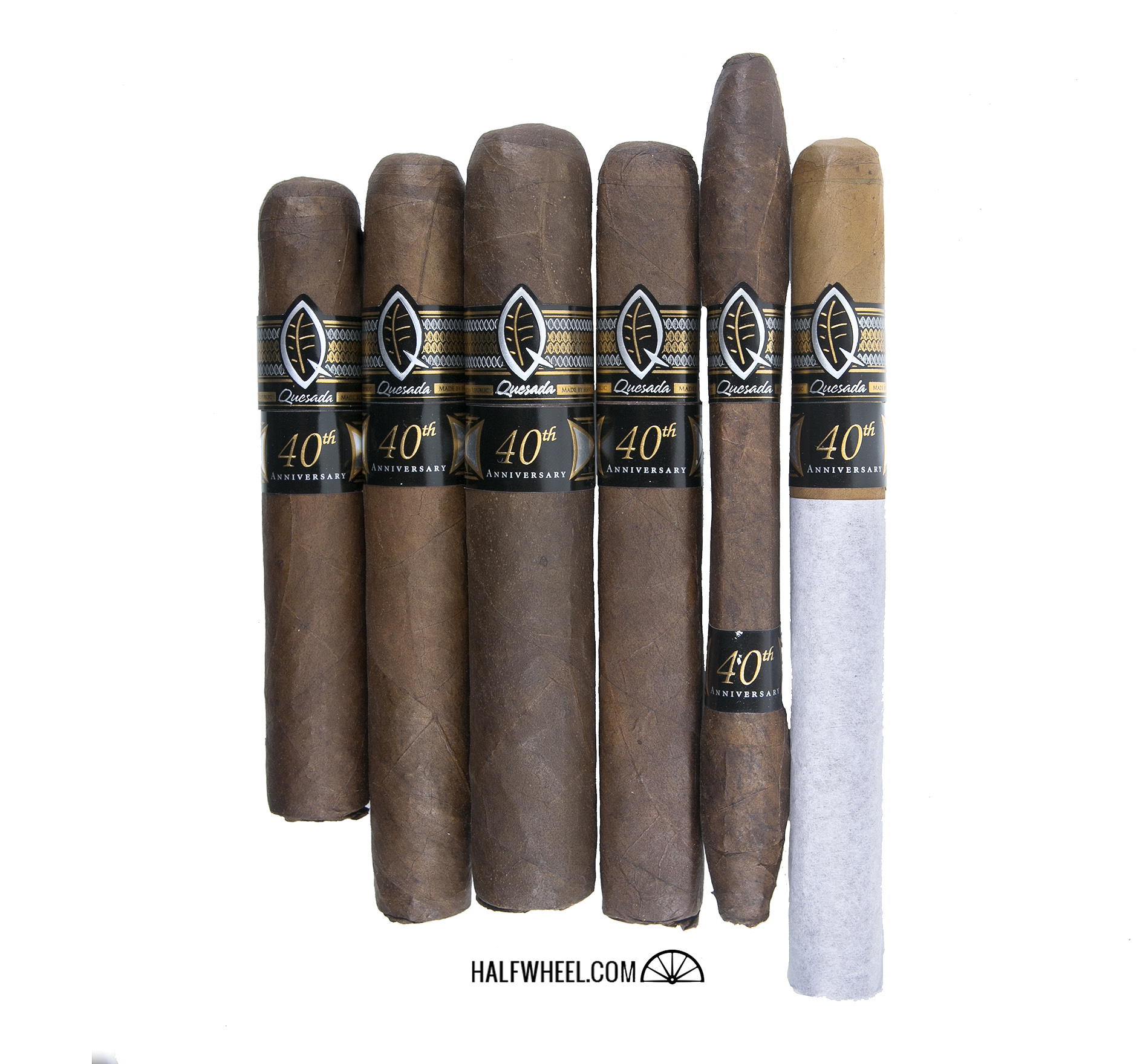 In reality, the Q40 is a six-vitola release that can be best divided up into three different lines: three regular production sizes, two limited edition sizes of that same blend and a limited production size that shares little more than a name and bands.

While most of the attention went to the company’s unique Salomon Press, a cigar that features a salomon head and foot with a rectangular box-pressed center, as time has gone on the sixth vitola has seemingly gotten more attention.

It’s formally called the Quesada 40th Anniversary Corona Clasica, but oftentimes referred to as “the Manolo blend.” The nickname references Manuel “Manolo” Quesada Jr., the company’s patriarch and in many ways, the cigar is his. It’s a unique blend, created by Quesada Jr. himself and is only available at events that he attends, where it’s distributed in the form of five-packs. After that, the retailer who hosted the event has the opportunity to purchase the cigar in 50-count cabinets. 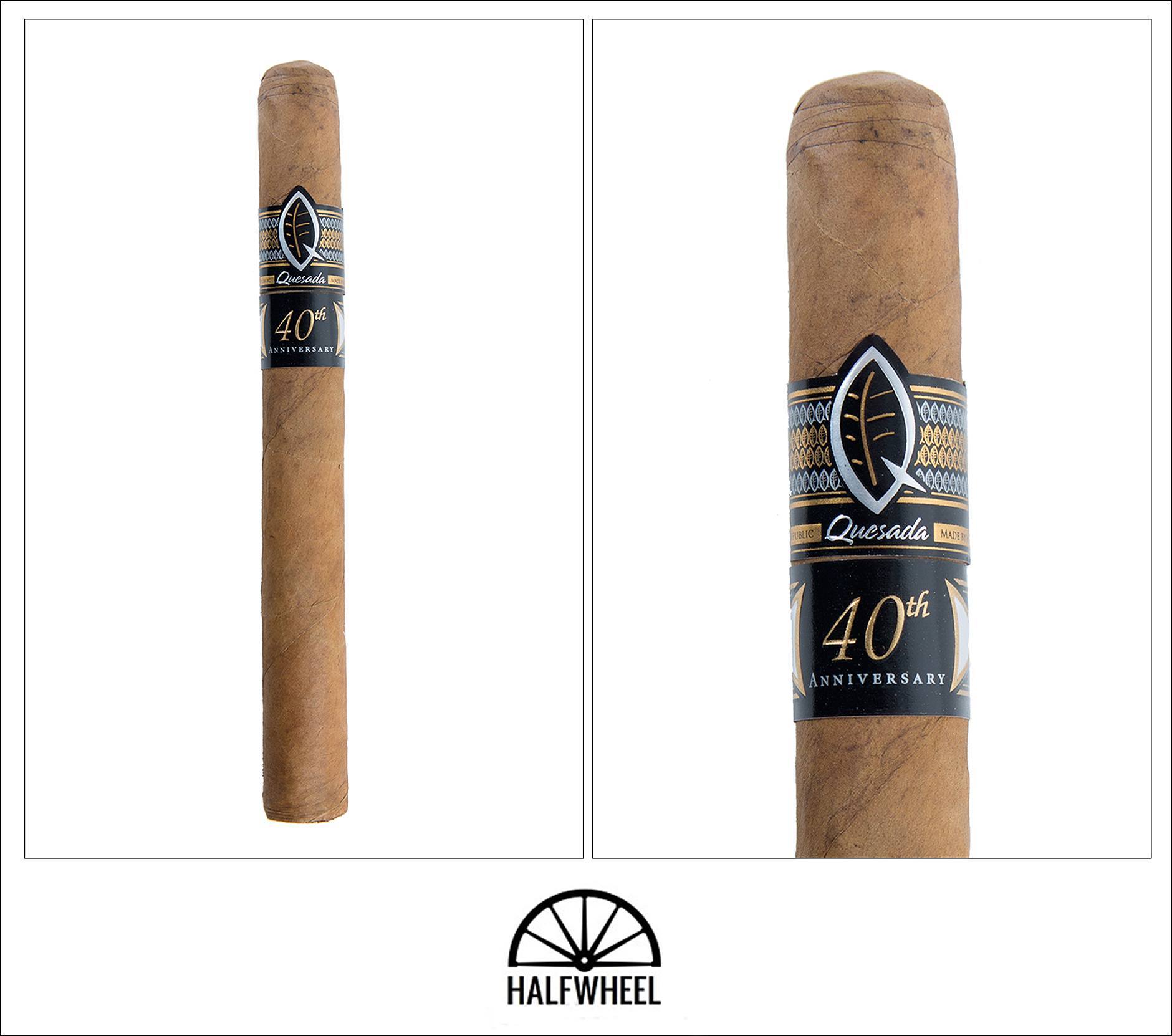 Visually, it’s impossible to confuse the Corona Clasica with the rest of the line. Instead of a dark coffee-colored wrapper, there’s a vibrant golden shade that most consumers would recognize as Ecuadorian Connecticut leaf. Aroma-wise, it’s pungent wet barnyard with some cocoa. Despite the use of cellophane and the tissue paper, it’s fairly faint. The foot smells like melted Hershey Kisses along with a bit of earth and sweeter woods, a decent enough array to get me interested. I’ve never dipped a brownie into a glass of whiskey, but I imagine it tastes something quite like the front end of the cold draw of this Quesada. Elsewhere, there’s some woodiness, but it’s a far cry from the unique chocolate flavor.

Finding the cold draw in the first puff does not happen. Instead, there’s a sweeter note that reminds me of twang, a hearty nuttiness and cedar and then a touch of cocoa. It tastes very Cuban, or at the very least it brings a lot of some core Cuban flavors particularly on the finish which has a lot of roasted notes, sweet cedar and faint pepper. Fortunately, the draw tightens a bit on the Corona Clasica and the smoke production picks up. An inch in and I’m picking up a great upfront sweetness, some floral notes and a short-lived pretzel flavor, while the finish has the aforementioned floral flavor along with a grassy and cedar flavor. It’s interesting, the initial flavors are full, while the finish is medium-full, a noticeable separation. Tea becomes a dominant part of the second third, while the retrohale gets sweeter thanks to an added fruit flavor. The pepper remains acute, but relatively limited, pinpointing where it wants to hit the palate, while the floral notes fade. As if on cue, the cedar flavor begins to cut through the saltiness, adding new dimensions to both flavors that were present in the first third. While the construction remains quite familiar, the body has suddenly shot up to medium-full and the strength, which was lifeless in the first two inches, is now at medium. 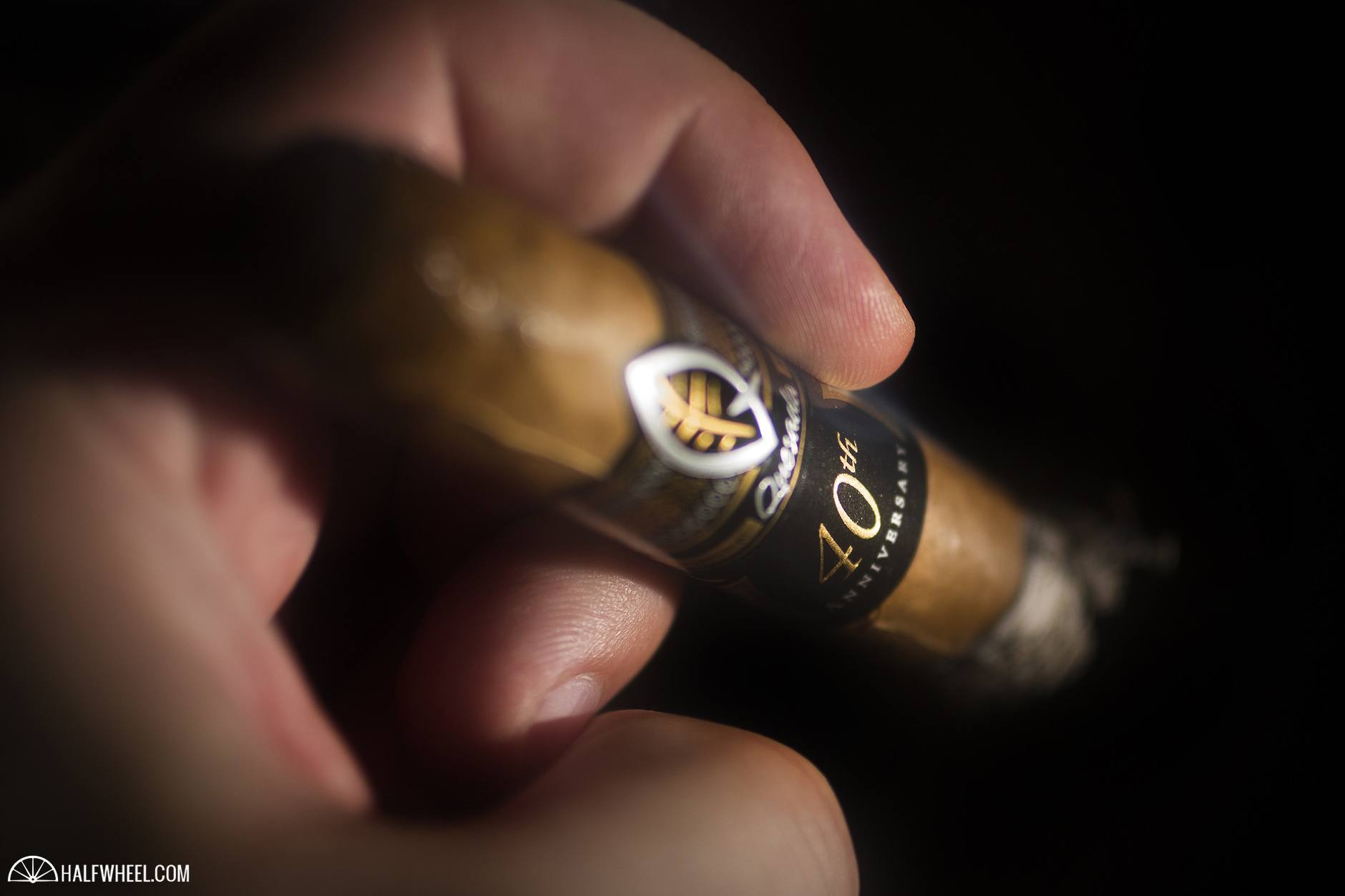 This Quesada Q40 presents a significantly different final third than I could have imagined. Floral, grass and a chicken sensation are now the central points of the cigar, while the saltiness has lightened out to a potato chip flavor. This continues until the final inch, when the flavors begin to fall apart. There’s a bit of a saving grace in a vanilla bean that emerges, but it’s a far cry from the great complexity of the earlier portions of the cigar. Around the inch mark is also when it hits me, the Corona Clasica is suddenly a full strength cigar. There is nothing wrong with the regular Q40 blend, it’s solid, perhaps a bit overpriced—but it’s not even close to being in the same league as the Corona Clasica. I am a bit torn. Some part of me wants to say that this should have been the regular Q40 blend. Another part of me says that if you want to make a cigar that is marketed as special and coveted then it needs to be exemplary, which this most certainly is. I think the Corona Clasica represents something Quesada has struggled at a bit—creating a medium-full cigar that can capture the finesse of some its lighter blends. In a world in which the vast majority of newer Dominican-made cigars are being more and more influenced by heavier Nicaraguan leaves, this is a refreshing example that you can make a cigar that captures the more subtle and delicate notes, while still packing a fair amount of body and nicotine.