After operating as a leaf brokering company, the Quesada family made the move to producing cigars in 1974. After 45 years of doing so, the company celebrated that venture, premiering the new line at the 2019 Procigar Festival in the Dominican Republic. It made its retail debut in the Spanish market in February 2019. 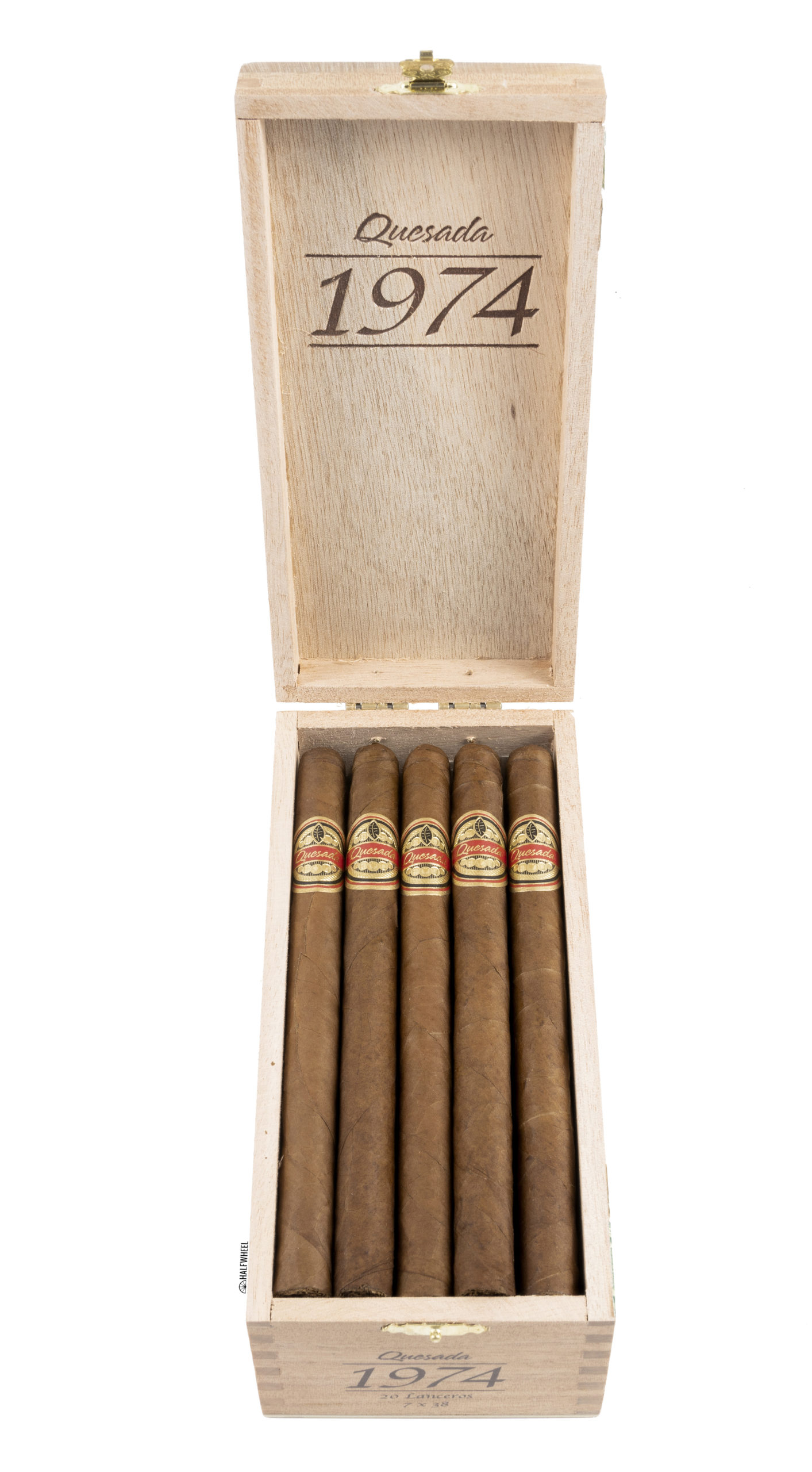 The Quesada 1974 line uses a Cameroon seed wrapper that was grown in the Dominican Republic over a Dominican binder and a mix of Dominican and Nicaraguan filler. The company noted that it grew all of the Dominican tobaccos used in the blend.

“This project truly embodies, in my opinion, our heritage and history,” said Manuel Quesada, president of Quesada Cigars, in a press release.

After debuting in Spain, the line made its way to the United States in the middle of September 2019. 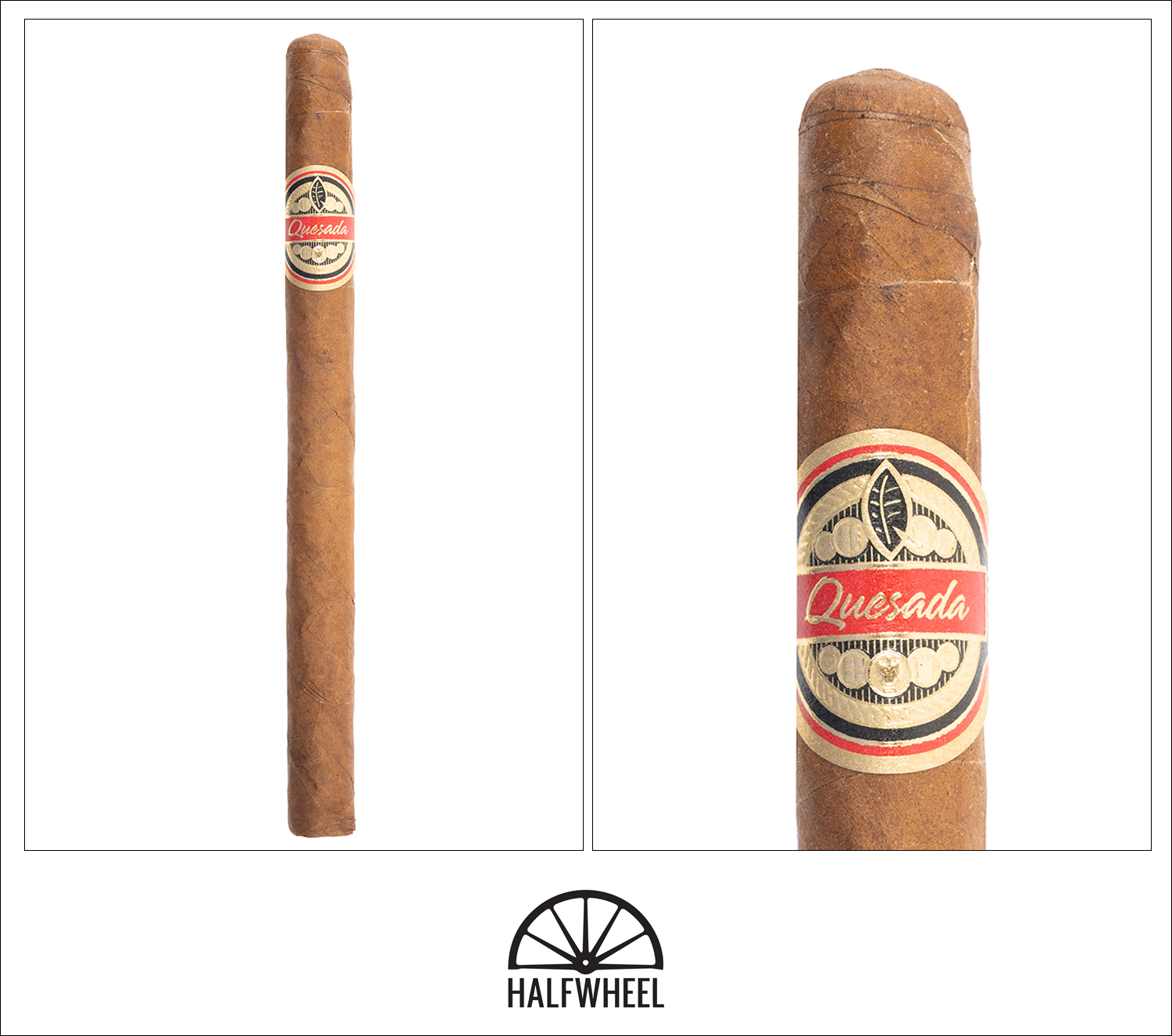 Between visible seam lines and its vein network, the Quesada 1974 Lancero has enough going on that it distracts me a bit from how well it appears to be rolled. I’ll add in that the band’s colors still feel a departure from the black, gold and silver combination of Quesadas from years past though the current ones give me a lot to process. The seams appear to be more a function of the wrapper’s color; it’s a gorgeous reddish-brown that is matte in finish as there aren’t enough oils to give it any kind of appreciable shine. The veins, however, are another story, and the first cigar I light up has a pretty noticeable one that comes out from the lower right corner of the band. Bear in mind, I’m not that picky on these things, but the more aesthetically-minded are. It’s a firmly rolled cigar, uniform from head to toe, with generally well-applied caps to boot. Aroma off the foot of the cigar reminds me a bit of a peanut butter and jelly sandwich though with varying intensities and combinations; there’s some wheat bread, a bit of oily nuttiness, just a hint of dark grape or orange jelly sweetness, and impressively good harmony between the players. Air moves well on the cold draw, and while I get the same thoughts as I did from the aroma, though the wheat is much more prominent while the other elements are very subtle. There’s also not a lot of pepper to be found.

A single flame torch lights the Quesada 1974 Lancero quickly and I’m greeted by a tangy, almost sharp flavor that includes damp cedar and sour chalk, as well as what appears to be some white pepper that tingles the very tip of my tongue on the first sample. It’s not a great start, salvaged a bit by a cleaner retrohale that leads with white pepper and doesn’t try to do too much else. It’s also not a consistent start, as the second sample is almost straight peanut flavors with just a bit of mild pepper. Retrohales are consistently enjoyable with a white pepper leaning ahead of just a bit of chalk and creaminess. The first sample rights itself by around the one-inch mark, at least shedding the sourness and whatever was giving it the bite, though it appears to need a few more puffs to get truly on track. It gets that done as the second clump of ash begins to build, with a profile that is a mix of dry toast, nuttiness and pepper, a bit drying on the palate but not as much as one might think. In terms of intensity, it’s medium-plus, as is body, with strength closer to the medium mark. Construction is generally very good, though I’m concerned with the wrapper as it has shown a few small cracks that I’m hoping don’t become problematic. By the start of the second third, the cigar is in a pretty solid place, showing some depth and complexity by way of woods, a 70/30 mix of white and black pepper, cake donut, a bit of creaminess and the occasional flirt with an earthy base note that sits right between the more typical Ecuadorian and Dominican flavors. If there’s one thing I can’t say I’m getting is the typical notes of Cameroon, at least in the broad sense, meaning the sweet and occasionally spicy flavors. That changes a bit as the cigar progresses, but it’s primarily through the retrohale, which is a bit softer and more developed than what the palate gets. As the end of the second third nears, the overall profile sharpens up a bit. Flavors are a bit more pronounced and pointed while still being enjoyable, yet the effect feels similar to the effect that adjusting—or overdoing—the sharpness on a picture has on the eyes. As such, the final puffs of this section begin to overdo the white pepper a bit, and it goes back to work on the tip of my tongue. Construction and combustion have both been very good thus far; as long as the cigar is given a reasonable puff every so often, it keeps burning along quite well. The final third of the Quesada 1974 Lancero begins leading the cigar to the sharper profile it exhibited in the first third. The few hints of sweetness have largely subsided, which clears the way for the pepper to be the first to undergo the change, and almost as if on script, the sour chalkiness is back with just about two inches left. The draw also begins to firm up, and each puff feels like it takes just a bit more work than it had previously. Retrohales continue to deliver a respectable amount of white pepper, and the combination of retrohale and flavor hit a few very good spots where the body is remarkably full, flavor is medium-full and strength is closer to medium. It goes without saying that the longer the cigar fights off the chalk and sourness, the better the result is, though it does mean more woodiness and more dryness on the entire palate. With about one inch remaining, it’s clear that the cigar is going to ride out this development, almost completely boomeranging back to where it started. The technical performance is still good, as even the slightly tighter draw didn’t hamper the experience too much. I wanted to say that after smoking three samples of the Quesada 1974 Lancero, I wasn't quite sure what exactly the cigar was aiming for with its profile, yet I'm more inclined to think came up just a bit short of actually doing it. When the first puffs of the first sample are sour and chalky, it's not a great introduction, yet the rest of that cigar and the other two samples showed it was capable of delivering much more, and it is those parts that drive the score. The nuttiness and wheat set a consistent and enjoyable base which pepper uses as a frequent springboard to move the profile along, and which I'll most remember about the cigar. What left me lacking was the Cameroon component, of which I only picked up the most infrequent traces, and definitely not enough to leave me thinking I was smoking a tobacco befitting the name Cameroon, a varietal that without fail piques my interest. All together, the Quesada 1974 Lancero is an enjoyable cigar at a very reasonable price, and one that I wouldn't turn down if offered the opportunity to smoke another.