Before I get to the end of the final night of Puro Sabor, some more factory visits.

Earlier in the week I visited Oliva’s new box factory, a massive facility up the Panamerican Highway, north of where My Father Cigars S.A. is, that the company completed last year. It’s a box factory, not the most glamorous of things, but it’s impressive nonetheless. I haven’t been to that many box factories and I particularly want to see the Chinese ones that produce some of the most elaborate boxes in the cigar world, but the factories I’ve been to are another reminder of just how much work goes into producing cigars and the materials that surround them. Patrick Lagreid mentioned that he wasn’t floored by the facility and I’ll admit, it’s not as impressive as the box factories at Tabacalera de García and General Cigar Co., but it’s certainly one of the nicer facilities in Estelí. His issue stemmed around the fact that Oliva wasn’t using raw, unprocessed wood, rather big sheets of plywood. As someone that struggles to put together Ikea furniture sometimes, this seemed impressive. And clean. Like many box factories, it’s also one of the few places where it’s not completely crammed. And due to the precautions that are taken for safety, it’s likely going to be pretty spacious for years to come.

I’ve been on Oliva’s cigar factory tour so many times that I’ve literally helped give it in the past. While the company has always been hospitable—one year at the festival it gave out Serie V Culebras to all attendees—this year was a noticeable improvement in their hospitality. While I miss the chicken wings the company would serve to guests in year’s prior, the food this year was amongst the nicest presentation you’ll find at a cigar factory and the personalized cigar molds were an unexpected treat.

Oliva has not been the most welcoming factory for unexpected visitors over the year. I was once told, “it’s a cigar factory, not a gift shop.” However, if you do make it inside the gates, María José Morales will take care of you, just don’t expect your tour to conclude with a Culebra, because those are all gone. Allegedly. Oliva isn’t done building, the above picture shows a new tobacco storage building at the back of the company’s main factory. It’s challenging to gain some perspective, but the people are standing in the middle of that side of the building, the red thing is a gigantic sliding door and there’s more space in front and to the right of what you can see.

Here’s a bonus, a lancero getting bunched, a process a reader requested to see. Friday morning I visited Puros de Estelí Nicaragua S.A. (PENSA). This is the third time I’ve been in the facility and it truly is the hidden monster in Estelí. The factory is owned by J.C. Newman and makes Brickhouse, Quorum and other cigars, a lot of cigars. The company says it produces over 30 million cigars at the facility, making it the second largest in the country behind Drew Estate, which seems likely.

But you really wouldn’t get that sense from the outside. It’s not massive or opulent up front, rather, it’s a series of large rooms that keep getting larger until you get to the back, where the company’s massive tobacco storage is, and then you realize just how big this place is. Eric Newman, Drew Newman and Omar Ortez took us around. Drew is getting more and more involved in the business and given his Fourth Generation Cigar Co., I suspect you will begin to see a lot more of him in the future. PENSA is a bit of a contrast to Fourth Generation, a company that is making cigars using entirely U.S. materials—tobacco, boxes, labor, etc.—and with prices that will likely be 10x some of the cigars made at PENSA. Many of the same people who helped create the new NACSA factory also created PENSA and the factories still share a lot of things today. The factories were the first time I saw plastic trays being used to store cigars and there are now new trays with rounded edges to help reduce breakage. 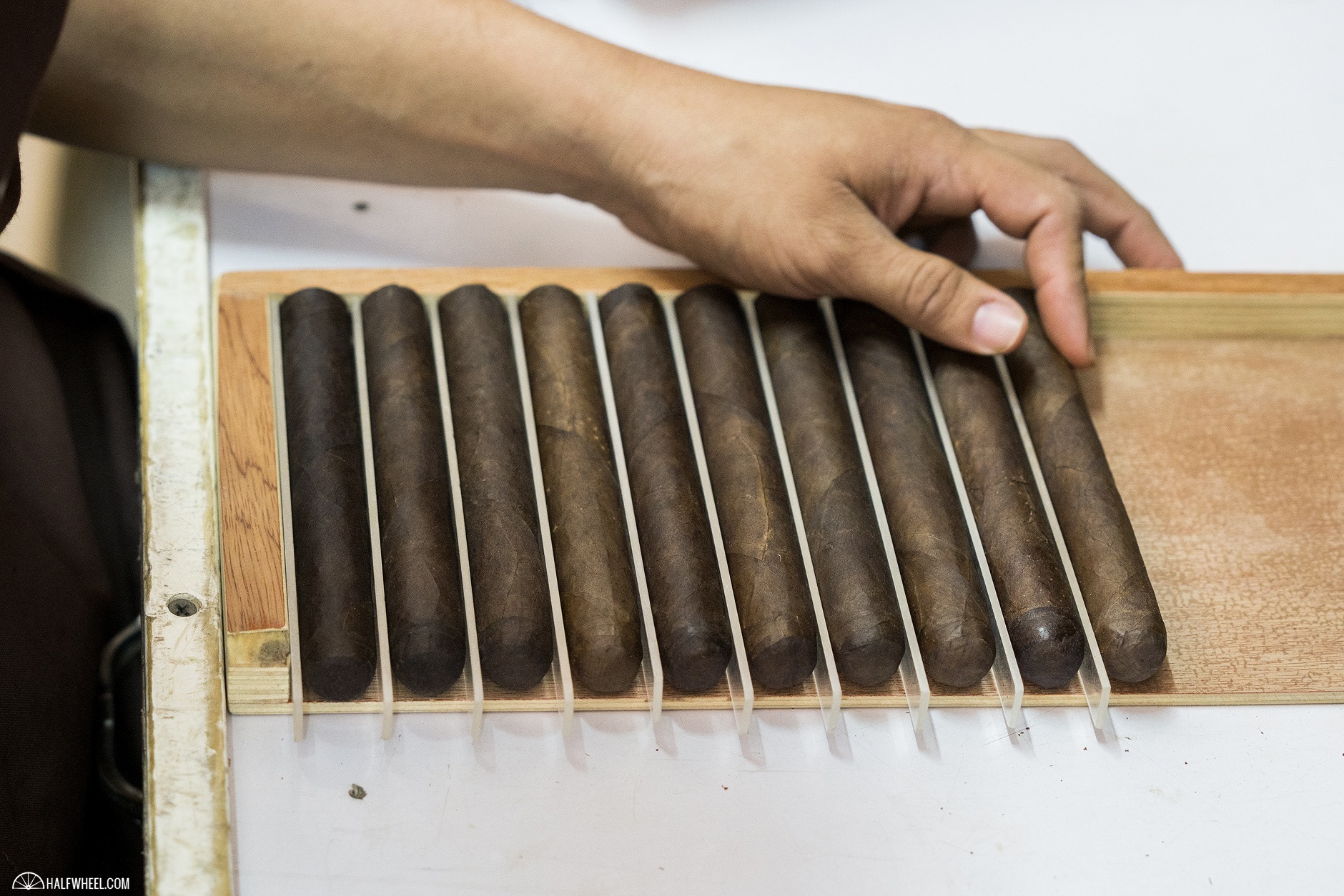 In addition, I saw them using clear plastic dividers to create the box-press, something that I hadn’t seen before.

As Patrick mentioned, we headed to La Corona after lunch on Friday and then to our hotel to prepare for the final party at Drew Estate.

I apparently had too much rum and fun to take many pictures, particularly ones in focus, but the party was fun. Substantially livelier in the past and there were still dozens of people dancing when I left at 2 a.m.

There will be one more post about Puro Sabor 2018, but until then, enjoy Gustavo Plasencia singing.