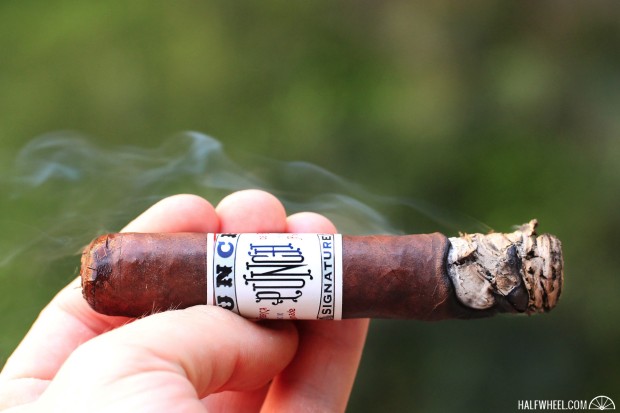 For the newest addition to the Punch line, General Cigar Co. created what it is calling its finest creation yet for the brand, a full-bodied smoke that gives a nod to both the brand’s history as well as modern design and palates.

The cigar is centered around an Ecuadorian corojo wrapper that General Cigar said was selected just for this release, while the binder is a proprietary Connecticut habano and the filler comes from the Dominican Republic and Nicaragua.

At the time of the cigar’s announcement, Agustin Garcia, blender of Punch Signature, said that the cigar is inspired by the Punch original blend. “Think of it as a brother who has a lot of fire in him, but also respects tradition and the family name,” the blender said.

As part of the build up to the release, updates about the cigar were released weekly on a new website created for the cigar, signature.punchcigars.com. Through the website, Punch is encouraging cigar smokers to interact with Mr. Punch, who will be creating custom memes on cigar-related photos submitted via Twitter or Instagram–both @PunchCigars–and with the hashtag #NiceBurn. Consumers can also submit photos via e-mail to [email protected] Mr. Punch’s memes will be featured on the site as well as on the Punch Cigars Facebook page, which will also feature details about the cigar.

For the packaging and artwork, General Cigar Co. reached back into the history books, going all the way back to the artwork developed in the 1800s for the first Punch cigars, with the back of the band featuring Mr. Punch and Toby, which is a throwback to the original Mr. Punch character.

The box mixes old and new, using bold color blocking and an acrylic window to showcase the band even when the box is closed, while the lid features the script typeface that was originally used in the 1800s. 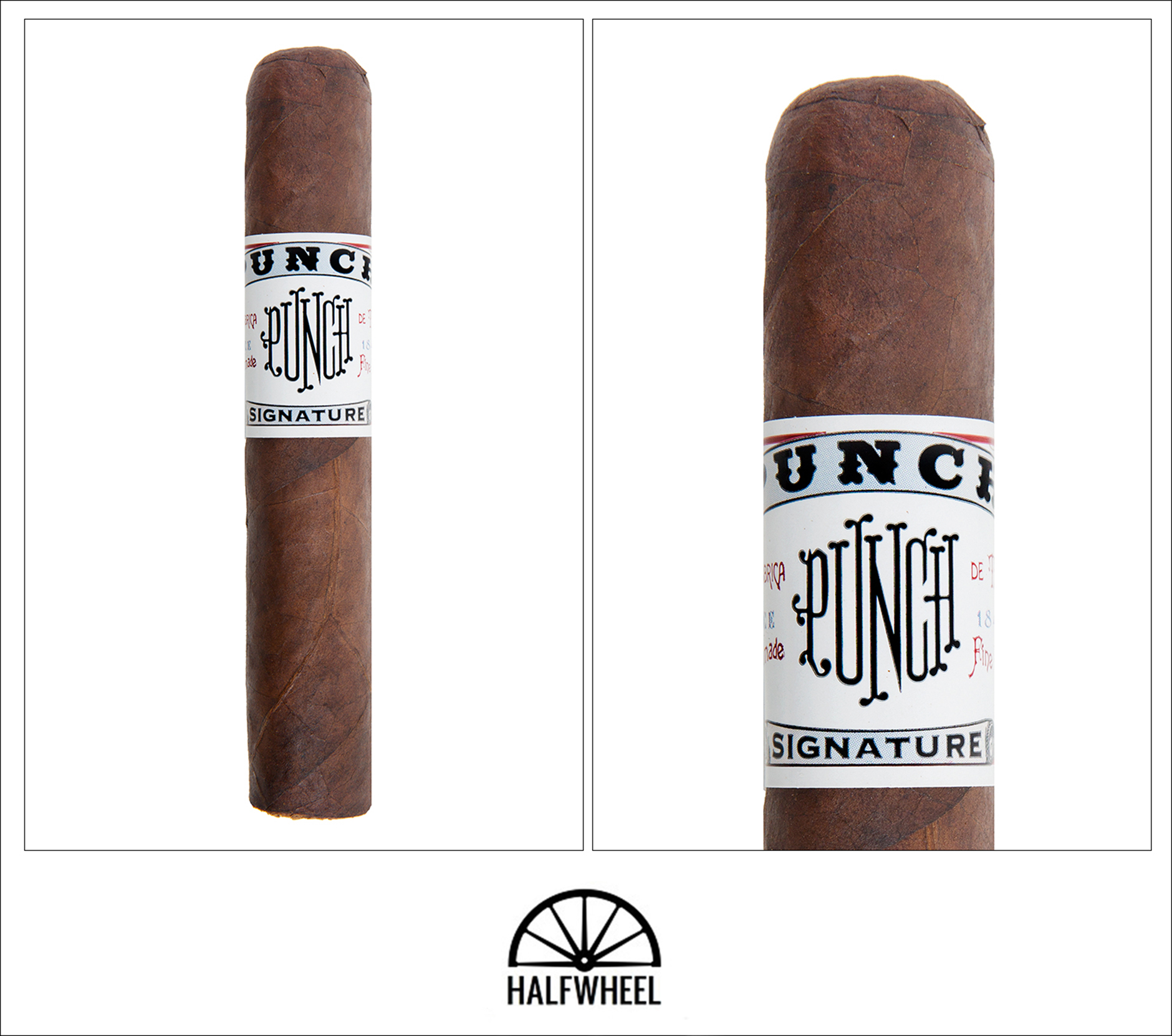 The Punch Signature is a bit of a visual contrast, as a veiny, oily and fairly dark wrapper leaf sets the backdrop for a glossy white band with a fair amount going on in terms of visual content. Unless you are a cigar historian or have other reason to be familiar with the older Punch presentations, this cigar feels decidedly un-Punch like, which I tend to think of having a more Cuban-style band, though that has been deviated from in certain releases. The first sample is incredibly soft beneath the band as has no problem compressing under a gentle squeeze and I have to stop myself from pressing even further in the sake of leaving myself something smokable. The second is a bit firmer, while the third is overall pretty acceptable, but shows a few inconsistencies. The pre-light aroma has a bit of that grape jelly on white toast sweetness where the two come together thanks to a bit of warmth to form a distinct smell with a bit of leather and damp wood behind that but no pepper. The cold draw is loose and shows more of the wheat bread note with a bright note of cedar trailing behind and again, hardly any pepper to be found.

There’s no getting around the bizarre opening note of the Punch Signature: the open draw the provides plenty of bitey, almost sour smoke once the cigar is lit, with a finish on the tongue that lingers longer than what I would consider average, let along enjoyable. The nose isn’t left out either, getting its share of pepper from both the ambient smoke and retrohales, the latter of which packs a complex punch of chalk and pepper that will challenge even the most seasoned nostrils. Even with the loose draw, the cigar does not burn very fast, taking its time developing any sort of sizable ash. The burn line begins to get a bit wavy in the first inch as well, as it looks like the oils in the wrapper could be more of a challenge to get through than they should be. Fortunately for the flavor, some of what I can only describe as sour funk goes away after the first inch and a half, but it is one of the rougher introductions to a cigar I have had in some time. 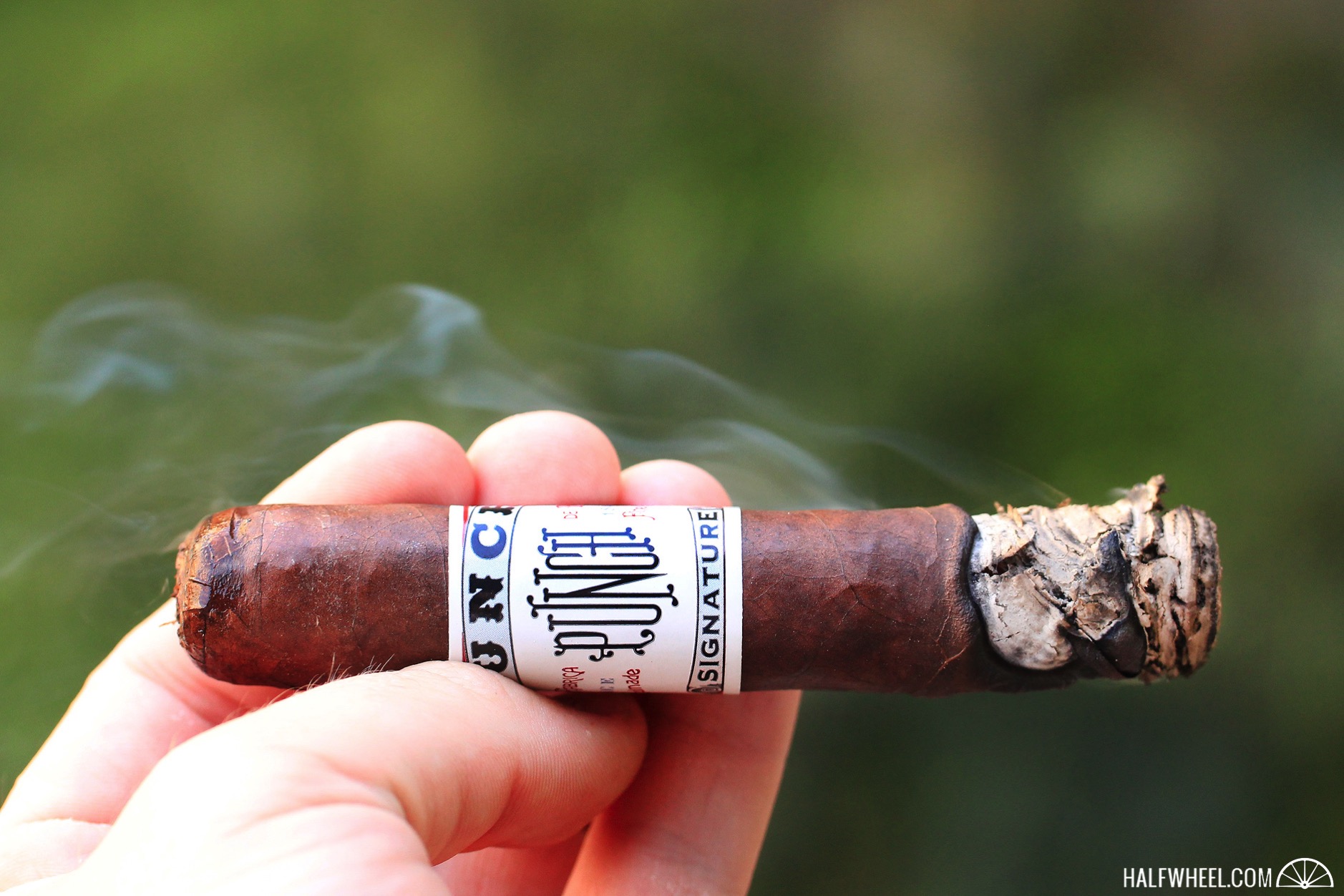 While wood and earth start to become a bit more distinguishable at the beginning of the second third of the Punch Signature, it continues to show more of what the first third offered—plenty of flavor but lacking in balance or coherence, as each puff delivers a fair amount of pepper but also flavors that are simply off-putting. It’s hard to put specific names to them as I really can’t recall tasting much like it in either food or drink. In one sample, the change simply didn’t happen and with combustion becoming nearly impossible, I simply had to call it quits. The other two were a bit better, and while they seemed headed towards more pleasing flavors, neither could quite shake what they started with, and the lingering bite is tough to overlook. The aroma may be the cigar’s saving grace, as while it’s loaded with sharp pepper it also has some enjoyable warm beef jerky notes that provide a bit more depth and definition. 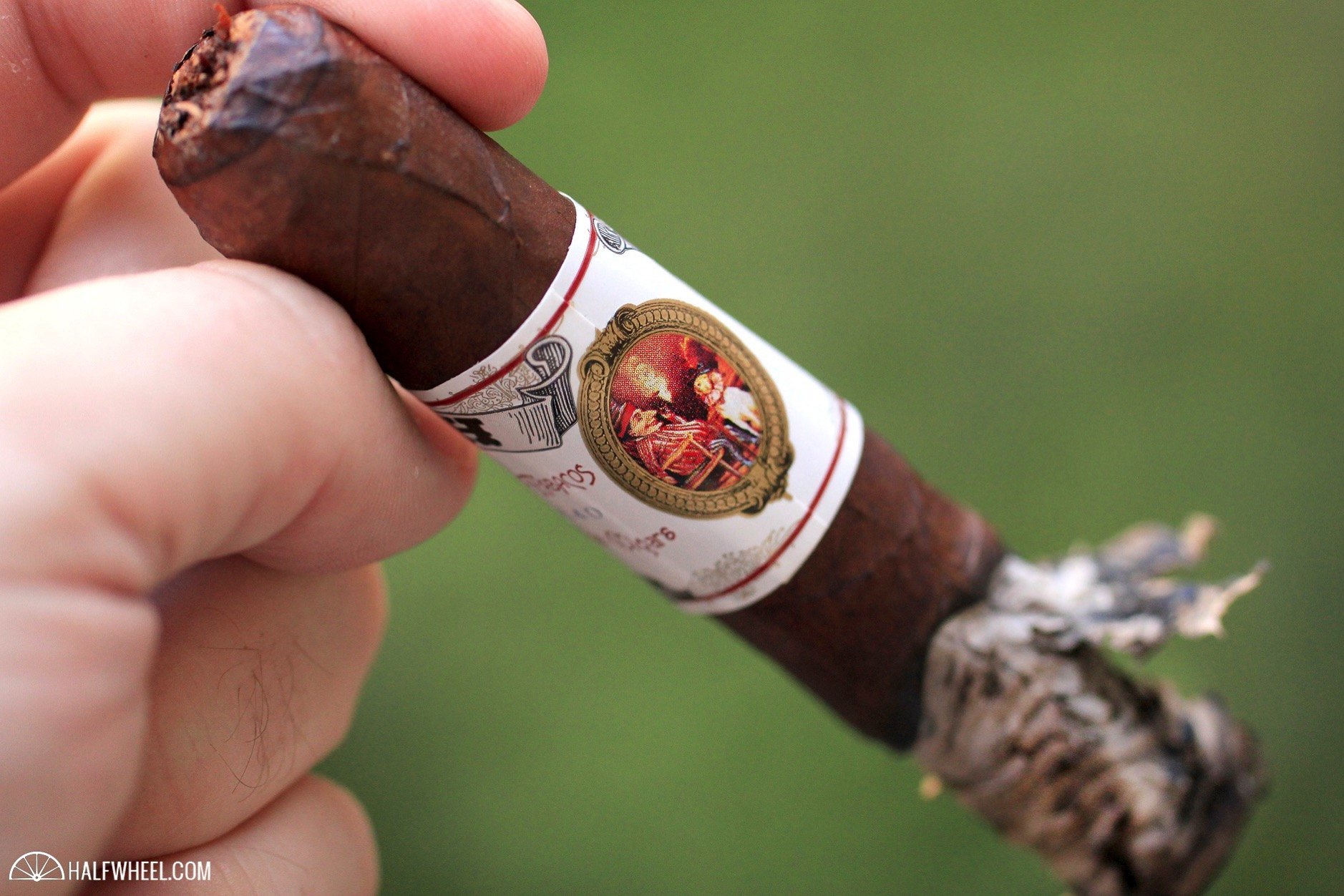 I will give the Punch Signature Robusto some credit as it seems to want to finish in a palatable manner, though there continues to be a really hard-to-enjoy tang and sourness that remains pervasive into the final third. While nowhere near as upfront as it was earlier, it is still easy to pick up and colors the rest of the flavors pretty significantly. I’m still getting a bit of damp wood, leather, earth and a bit of pepper, flavors that would otherwise be enjoyable if it were not for this lingering mystery component that just sours me to the cigar. In the first cigar, I call it quits with more than an inch left as I just don’t think I’ll get much more out of the Punch Signature blend than what it has shown to this point, while the third makes it down to about an inch before I concede. 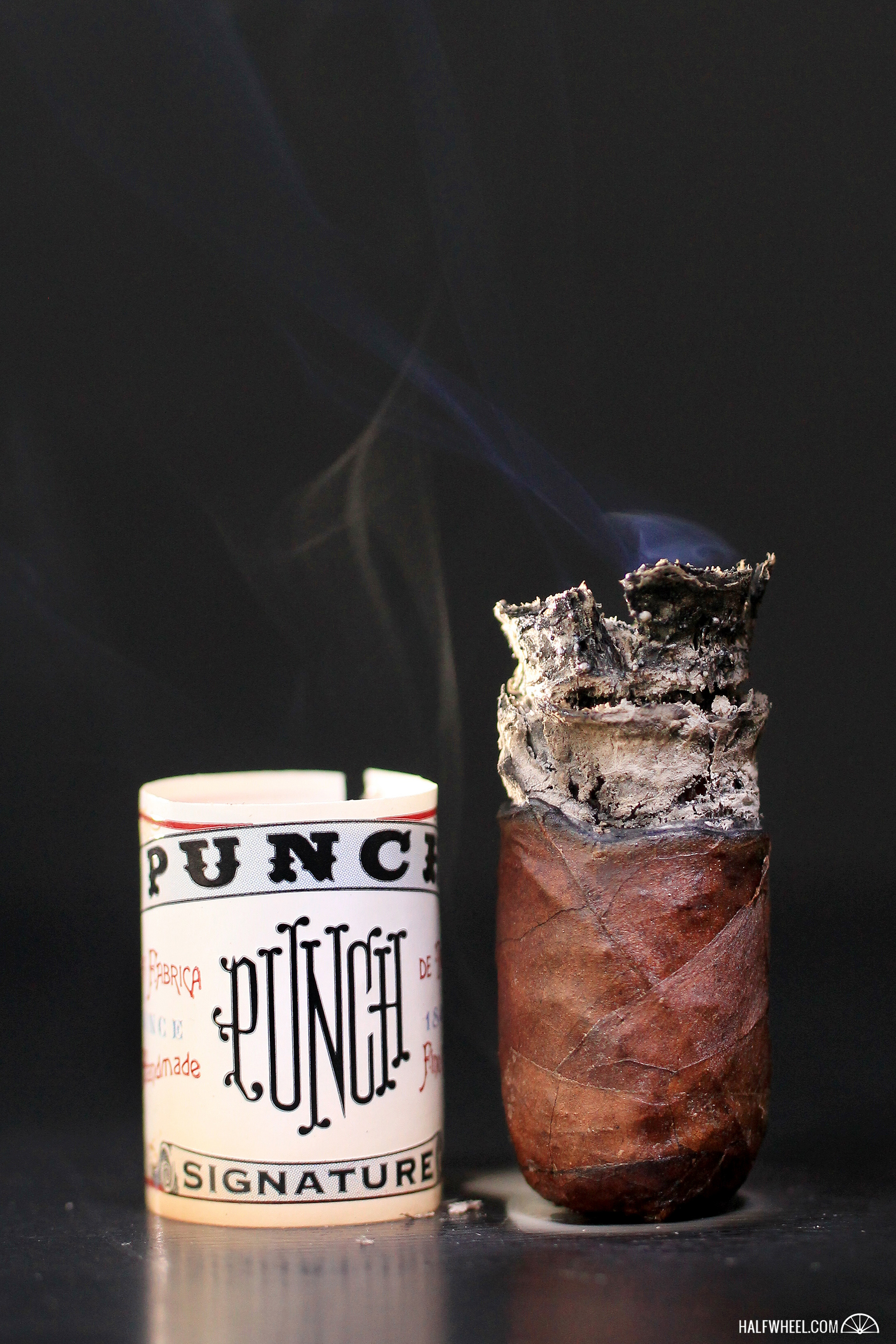 While the buildup to the Punch Signature was pretty good, once the flame hits the foot it simply falls apart, with an initial harshness and off-putting flavor that it never overcomes. I don't know whether the cigar is simply too young, the blend is off or I just ended up with three bad cigars, but after getting the same result with astonishing consistency, I'm left to think this is a cigar that simply shouldn't have been made. Maybe time will turn it around, and I'll certainly be firing up another one or two in three to six months to find out, but for now this is a cigar to pass by.