In March 2015, General Cigar Co. rolled out the new addition to its Punch line, the Punch Signature. Billed as being the company’s finest creation yet for the brand, Signature is a line that not one promises a full-bodied smoke but gives a very visible nod to the brand’s past while updating the look for the modern day.

Blended by Agustin Garcia, the cigar uses an Ecuadorian corojo wrapper that General said was selected just for this release, while the binder is a proprietary Connecticut habano and the filler comes from the Dominican Republic and Nicaragua. Garcia noted that the cigar is inspired by the original Punch blend. “Think of it as a brother who has a lot of fire in him, but also respects tradition and the family name,” he said.

The line was also released with a good amount of buildup on social media and the internet, with a dedicated website,  signature.punchcigars.com, created just for the occasion On the site, consumers were encouraged to interact with the brand’s iconic character, Mr. Punch, who would create memes based off photos submitted by consumers.

Here’s what I said about the Punch Signature Robusto when I reviewed it in April 2015:

While the buildup to the Punch Signature was pretty good, once the flame hits the foot it simply falls apart, with an initial harshness and off-putting flavor that it never overcomes. I don’t know whether the cigar is simply too young, the blend is off or I just ended up with three bad cigars, but after getting the same result with astonishing consistency, I’m left to think this is a cigar that simply shouldn’t have been made. Maybe time will turn it around, and I’ll certainly be firing up another one or two in three to six months to find out, but for now this is a cigar to pass by.

While the cellophane sleeve covering the Punch Signature Robusto has browned quite a bit in just over a year, the cigar itself looks much as I remember it, wearing a slightly oily wrapper that has a shade of brown that it unmistakably tobacco-colored. Trying to compare it to something else would be a disservice as its color is what I think of when it comes to being tobacco brown. It’s a firm cigar that doesn’t show much give, its density readily apparent in the fingers. From the foot the prelight aroma is remarkably fragrant if a bit challenging to dissect, more tangy sauce than anything with an ingredient list I’m not familiar with. There’s a subtle sweetness and minimal pepper, with subtle touches of spice and what could be rice wine threading everything together. The firm cold draw is much heavier and fuller, lacking the fragrance of the aroma and instead offering a heavy wheat bread note, no spice or sweetness, and only a trace amount of pepper.

The Punch Signature Robusto wastes no time getting into things, as the first puffs are still biting and sour, with a flavor profile that I simply can’t do an accurate job describing or embracing. Fortunately it is a more fleeting introduction than what the cigar gave off a year ago, and begins moving into a fairly palatable and enjoyable flavor marked by heavy woods and pepper on the palate, with a pepper-laden retrohale that at first pass is too much for my nostrils to handle. There is still a bit of harshness to the flavor as the pepper gets a bit overenthusiastic at times and I can’t help but feel like the tobacco needed a bit more time in its journey to this cigar, but the end product has shown some improvements with its year of rest. In particular, the half-inch or so leading up to the midway point is particularly enjoyable, with a slightly chalky twinge to top notes of thick apricot with pepper taking a momentary hiatus until the actual midpoint. The draw has been a bit firm and the combustion rate a bit slow, but otherwise the cigar is performing quite nicely. 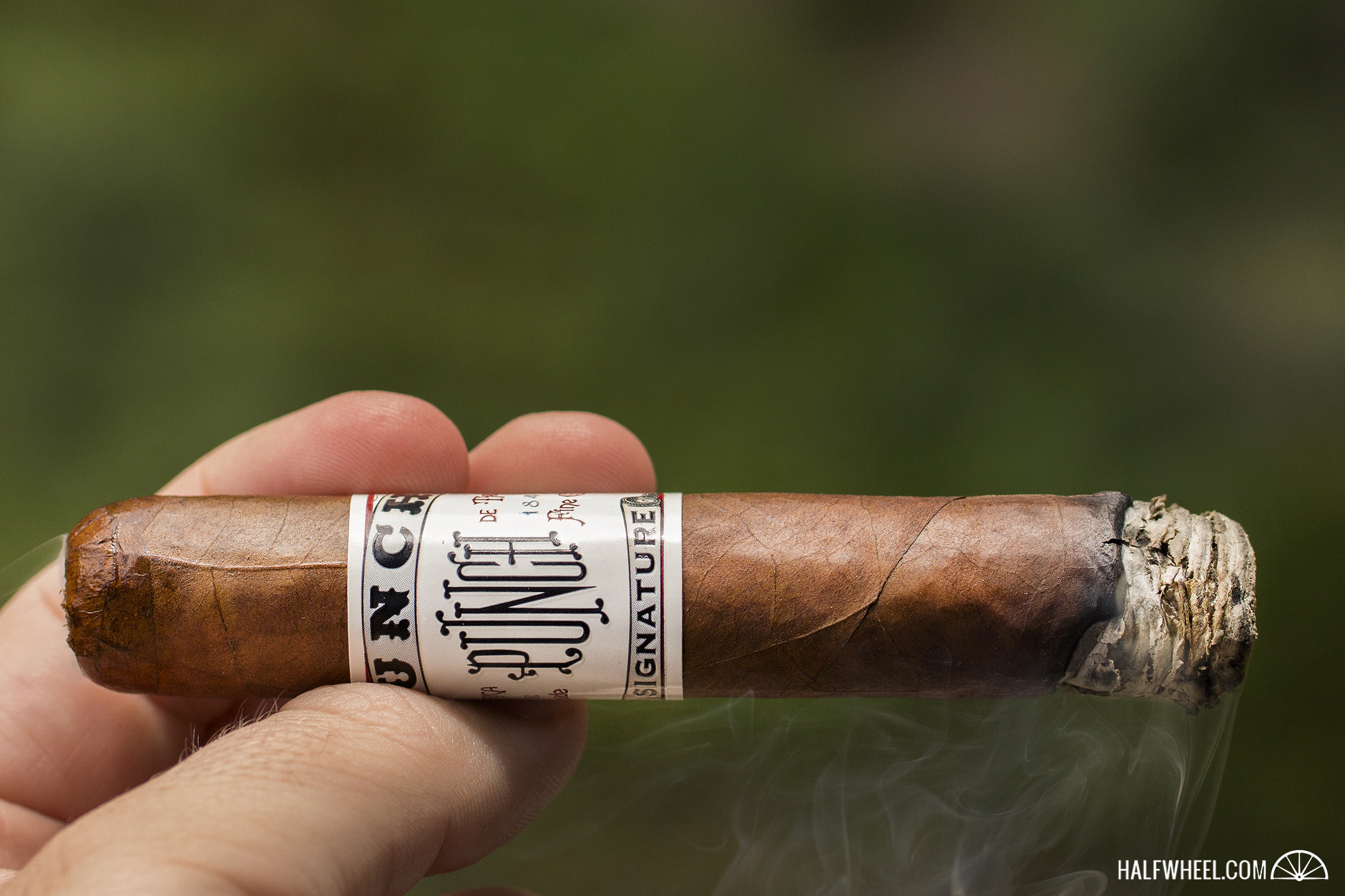 Much like it did approaching the midpoint, the Punch Signature shows the benefit it has gotten from being tucked away in a humidor for a year. While there is still the occasional bit of sourness, the cigar does its best to move past it and into a bit softer smoke, with chalk still leading the way complemented by touches of vanilla and pepper. There’s some strength starting to show through the Punch Signature as I can feel an increase in the nicotine content,  something that while not inherently bad or off-putting, doesn’t seem to be needed as the cigar was doing a perfectly fine job establishing itself in this half.

The Punch Signature Robusto is undoubtedly in a better place now than where it was a year ago; the blend is finally able to show off the flavors that I would have to assume Agustin Garcia intended for it to be known for, while many of the rougher spots have smoothed themselves out. Even after a year, it still feels like more time is needed, but at least I can now say there’s hope for this cigar, something I didn’t think I’d ever say a year ago.