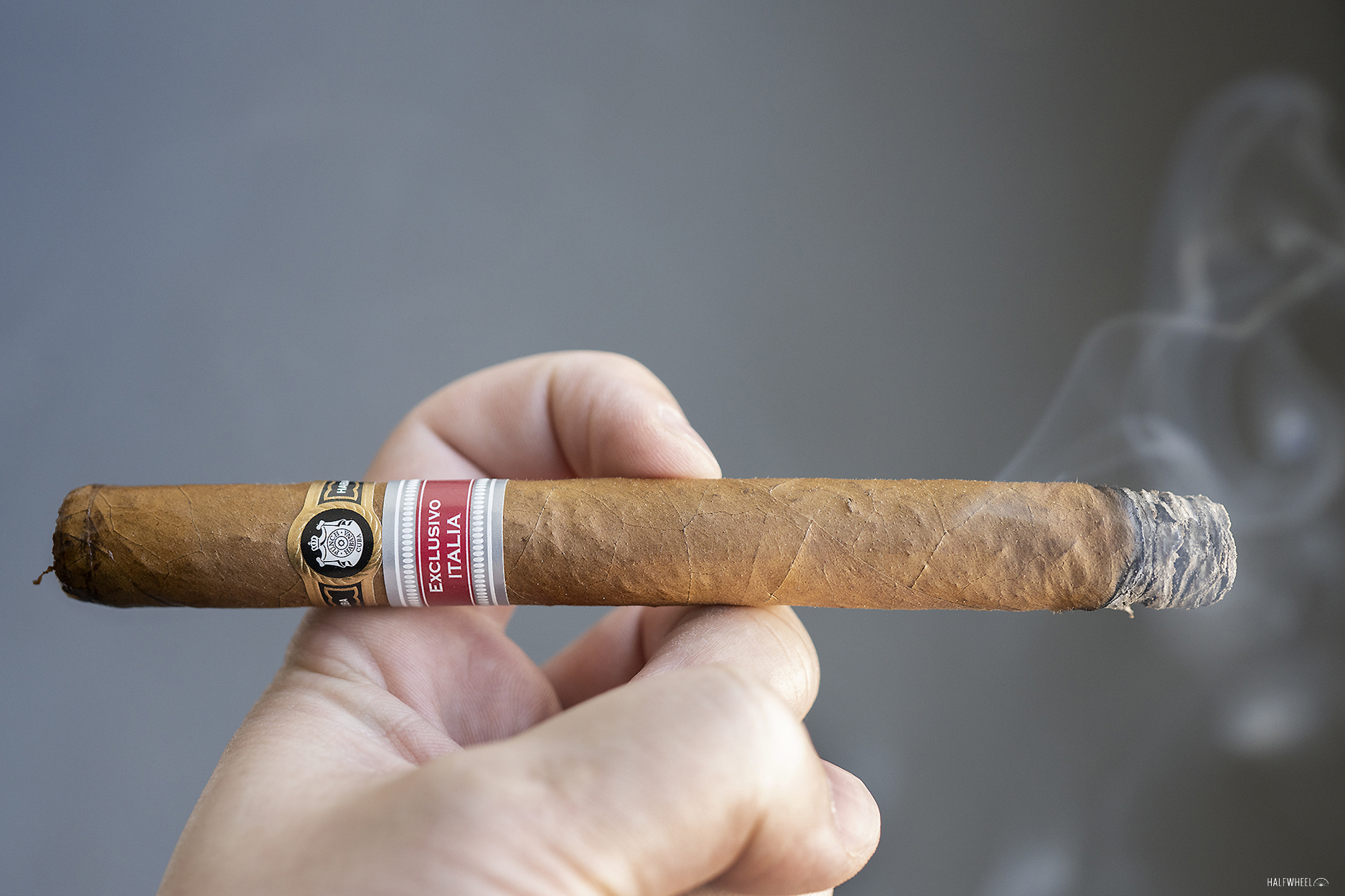 If Habanos S.A. let the staff members of halfwheel design an Edición Regional release, it would probably end up something like the Punch ManTua.

Now, if I had to guess, Brooks would probably lobby for a 109 head and for the cigar to be packaged in jars. I’m not sure what Patrick would say, but I’d sign off on a petit lancero with special bands, packaged in 50-count cabinets.

So did Diadema S.p.A., the Italian distributor of Cuban cigars. In 2020, it released the Punch ManTua, officially the country’s 2018 Edición Regional, though like seemingly every Edición Regional these days, it showed up after the year it was designated for.

For those unfamiliar with the Edición Regional program, the basics are as follows:

In 2005, Habanos S.A. introduced a new series of limited production releases that would eventually become to be known as Edición Regional (Regional Edition). The program took regular Habanos S.A. brands and gave their regional distributors special sizes that aren’t part of the respective brand’s regular production line-up. In some cases, like the Bolivar Gold Medals, Habanos S.A. gave specific distributors cigars that had been discontinued, but most are sizes that have never been available for that brand prior. There’s are two exceptions to the rule. One is perhaps the most famous ER of all time, the Edmundo Dantés El Conde 109, which was an ER available for Mexico that is related to the Montecristo brand, but is largely its own brand. Italy has received La Escepción, a defunct brand, as an Edición Regional twice.

More recently, with little exception, distributors are restricted to a single Edición Regional release per year. That being said, many of the releases don’t actually ship until one or two years after their planned year.

The Punch ManTua is a 6 x 38 petit lancero with a very small pigtail on its cap. It was released in early 2020 with Italy receiving 2,500 boxes of 50 cigars. The cigar checks the special band box by wearing a black and gold Punch design—one that I don’t think I’d seen up until this point—and a design that was relatively reminiscent of the La Escepción, another special Edición Regional for Italy.

As for the name, it is a reference to a city in Pinar del Río, Cuba, which itself is named after an Italian ship of the same name that crashed near the city in 1605. 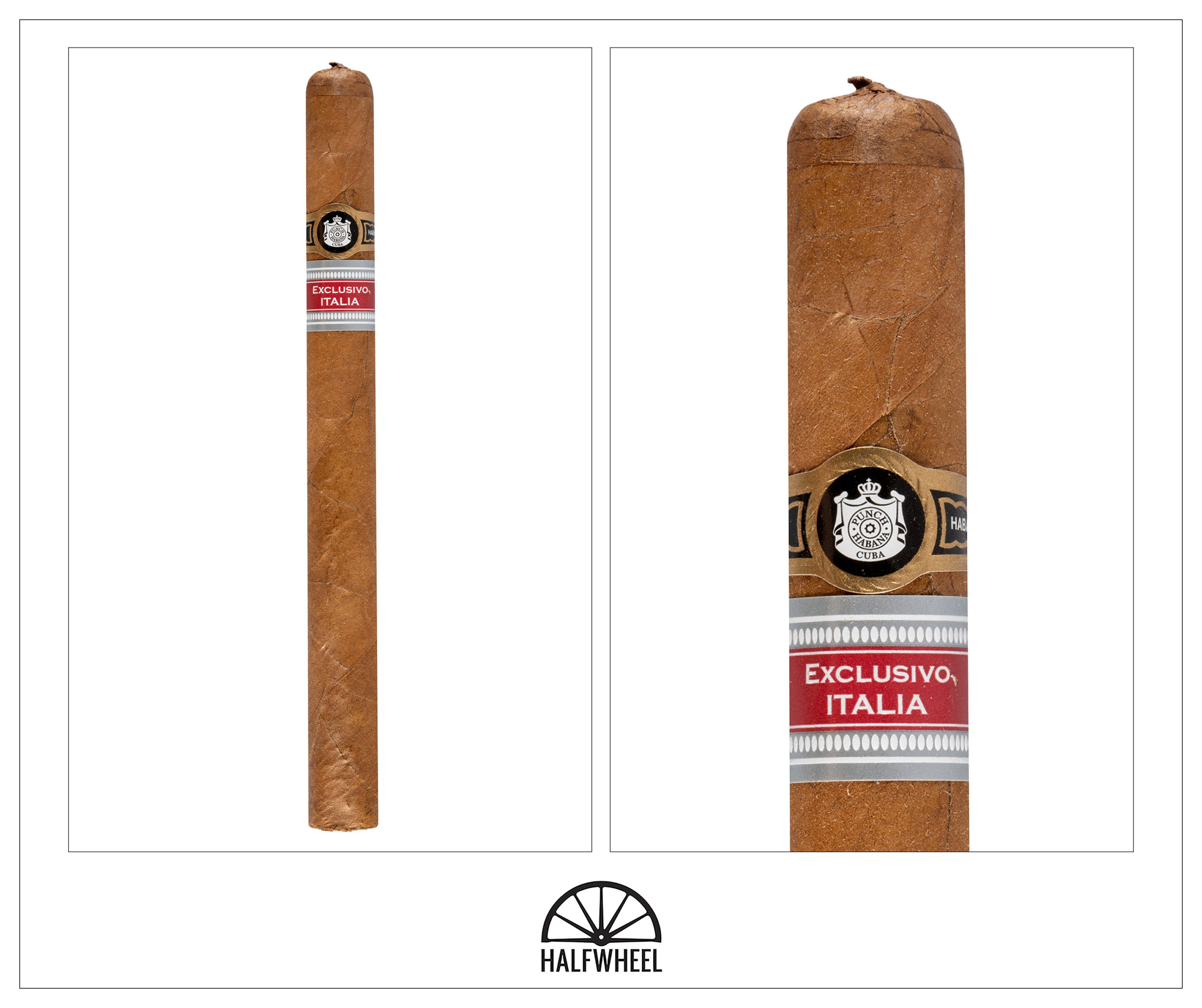 If you photographed this cigar with a smartphone from 2018, perhaps the cigar’s wrapper would look very good, but in person or with a more advanced camera and lighting system, all is not perfect. It does the three most important things: the wrapper color is beautiful and consistent, the shape is a near perfect cylinder and there’s nothing that looks out of place. That said, the veins are very obvious and the wrapper is stretched much more than most cigars. Depending on the pictures, you might see a more common pigtail, but the cigars I smoked—while not apparent in the picture above—have a fan tail that is similar to the Cohiba Lanceros. These samples have been in our humidor for about a year and not stored in the box, as such, there’s almost nothing coming from the cigar aroma-wise. There’s a mild-medium generic tobacco aroma, but I can’t even find more common sensations like acidity or sweetness. The foot is also mild-medium, but I am able to find a mild sweet floral twang that is common amongst many Cuban cigars. Cold draws are medium-full with lots of sweet floral flavors over something that reminds me of an orange juice and then peanut butter.

I find the draw to be a bit tight before lighting the cigar, but within the range of what I’d consider normal. Unfortunately, toasting the foot cigar seems to push it just beyond the limits of “normal” and into the “slightly tight” category. That’s not great as I can feel it constricting the smoke during the first puff. Fortunately, the smoke that gets to my mouth is great flavor-wise: lots of sweet and hearty cedar that transitions to nuttiness before ending with some peanut butter. If you are into cigars with flavors of cedar and nuttiness, the first third of ManTua is going to be just for you. It’s a detailed and smooth mixture of cedar and nuttiness for almost all of the first third. While there’s little else to be had—the nuttiness includes both raw nuts and peanut butter—when the smoke is in my mouth, it’s not like I ever felt like things were lacking. The finish has nuttiness—less of a peanut butter flavor than before—leather, a soft pretzel-like saltiness and touches of a mild black pepper. Retrohales have damp earthiness, nuttiness, a pine flavor, floral sweetness, a wintergreen mint-like flavor and a mild amount of acute pepper. Once the smoke leaves the nose, there’s honey, more of the sweet floral flavors and a crisp hay that reminds me of drinking a day-old Yellow Rose IPA. Flavor is full, body is medium-plus and strength is mild-medium. While burn and smoke production draw are very good in the first third, the draw feels like it’s one tick away from destroying the cigar. It’s tighter than even I’d like a lancero to be and while it hasn’t gotten out of hand yet, it’s clearly constricting the smoke and probably hurting the flavor.

Towards the end of the first third, the profile gets a lot darker. A pine-like flavor coats the palate and while I don’t think it overtakes the peanut butter as the strongest flavor, the pine flavor is the most noticeable aspect of the profile. Behind that is cedar, some honey sweetness and a bit of citrus. That pine-like profile fades out and the peanut butter edges out earthiness for the strongest flavor. Cedar and black tea round out the profile as secondary flavors. The finish has peanut butter over earthiness, white pepper and some toastiness. If you are thinking to yourself you’ve read a lot about nutty flavors, that’s true, but that’s not my issue with the nuttiness. Somewhere around the halfway mark, I find that some of the flavors are getting too concentrated for their own good, none more so than the nuttiness which at times can get so concentrated it tastes harsh. Retrohales have lemon, walnuts and some more of that interesting hay profile, though it’s milder than before. The retrohale’s finish is where that Yellow Rose IPA-like hay flavor really comes alive. It’s pretty subtle, but since there’s not much else to be tasted, it gets to interact with various parts of my palate basically undisturbed. Flavor is full, body is medium-plus and strength is somewhere between mild-medium and medium. Two cigars need touch-ups and one cigar has started going out completely. This is happening without much notice from the cigar, something that I’d attribute to the draw. 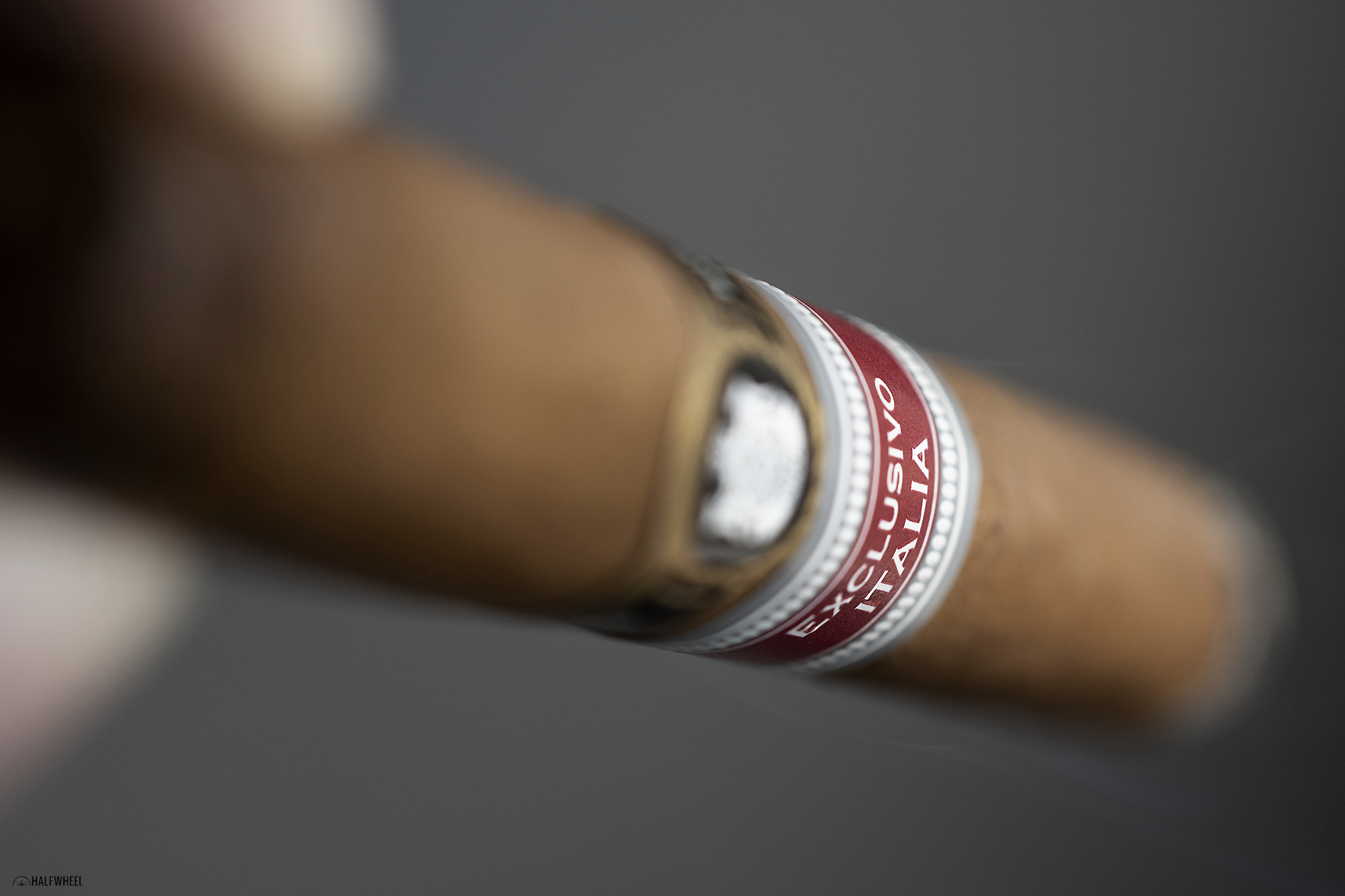 For much of the final third—which can be smoked down below one-inch—it’s basically just the second third all over again. At times, I feel like a generic potato chip flavor overtakes the nuttiness, but that’s only for the nuttiness to return. The sweetness shifts to more of a raw sugar sensation as compared to the floral and honey flavors I found before. One sample has some saltiness during the finish, which I don’t think helps the profile, but otherwise it’s peanut butter over earthiness and some toastiness. Retrohales have nuttiness and earthiness with a mayonnaise-like creaminess. I don’t find the hay flavor that I did during the middle parts, instead it’s more of a mixture of peanut butter and saltiness. Flavor is full, body is medium-plus and strength is mild-medium. I’m able to smoke more than five inches of one cigar without a touch-up, but the draw issues were present from start to finish. The other two cigars are losing points from regular touch-ups and a poor draw. 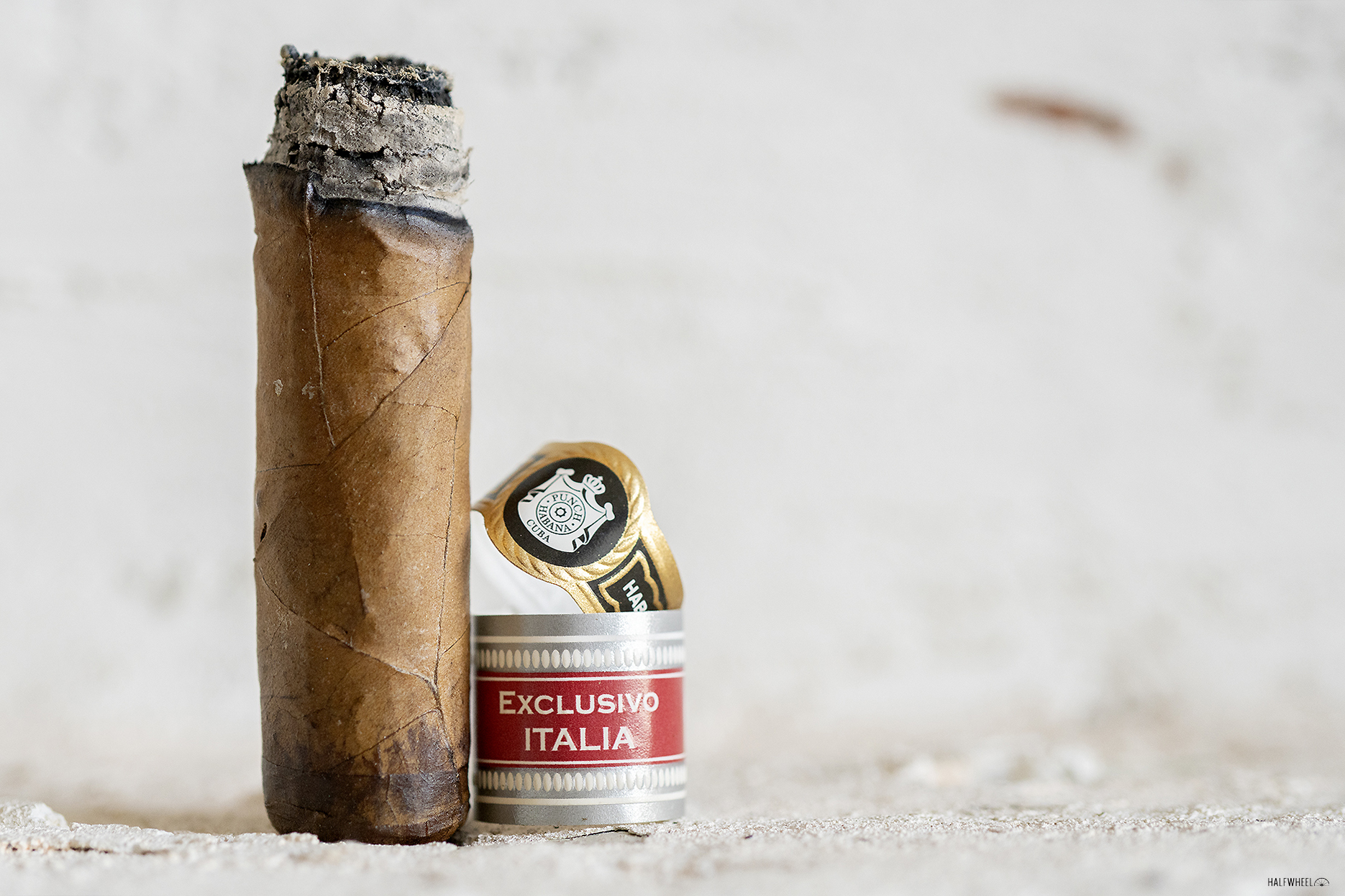 This is the sixth consecutive Edición Regional review where I found the draw to be too tight and negatively affecting the flavor profile. It’s a problem for Habanos S.A. and it’s a problem that extends beyond Cuba's Edición Regional cigars. In some sense, I think Cuba's draw problems have gotten better in that there are very few plugged cigars at this point, but it obviously has not been solved because there are plenty of cigars that are negatively impacted by tight draws. The difference between most of the aforementioned five Edición Regional reviews I’ve done where I've complained about a tight draw and the ManTua is that the ManTua showed tangible results at times, whereas most of the other cigars showed hypothetical promise. There were times when I could take a single puff and taste a very good cigar, albeit one with a bad draw. Not every Edición Regional I smoke—and, for some reason, I smoke more than the ones I review—has a bad draw, but this surely isn't the outlier.