When it comes to talking about well-known brands in the cigar world, I’m always a bit confused as to where the Punch brand stands. As part of General Cigar Co.’s vast portfolio, it certainly has the support of one of the largest premium cigar manufacturers behind it, yet I can’t say that I hear it being brought up in conversation much.

However, those that know the American version of the Punch brand well be better acquainted with one of its limited edition offshoot lines even better than the core product, that being the Punch Gran Puro. That cigar, a Honduran puro, has been part of the landscape since 2003. Earlier this year, Punch rolled out a extension to that line and turned to one of Honduras’ neighbors, Nicaragua, for some of the tobacco as well as the name.

While the Punch Gran Puro Nicaragua may have you thinking that this cigar is a Nicaraguan puro, that wouldn’t be correct. The cigar uses high-priming Nicaraguan tobacco for the binder and filler, while the wrapper is Connecticut broadleaf from the United States.

“For the extension of the Gran Puro line, our artisans built a blend that balances Nicaraguan tobaccos with a maduro wrapper to deliver a layered, dimensional flavor not traditionally found in Nicaraguan-based cigars,” said Ed McKenna, director of marketing strategy for General Cigar, via a press release. 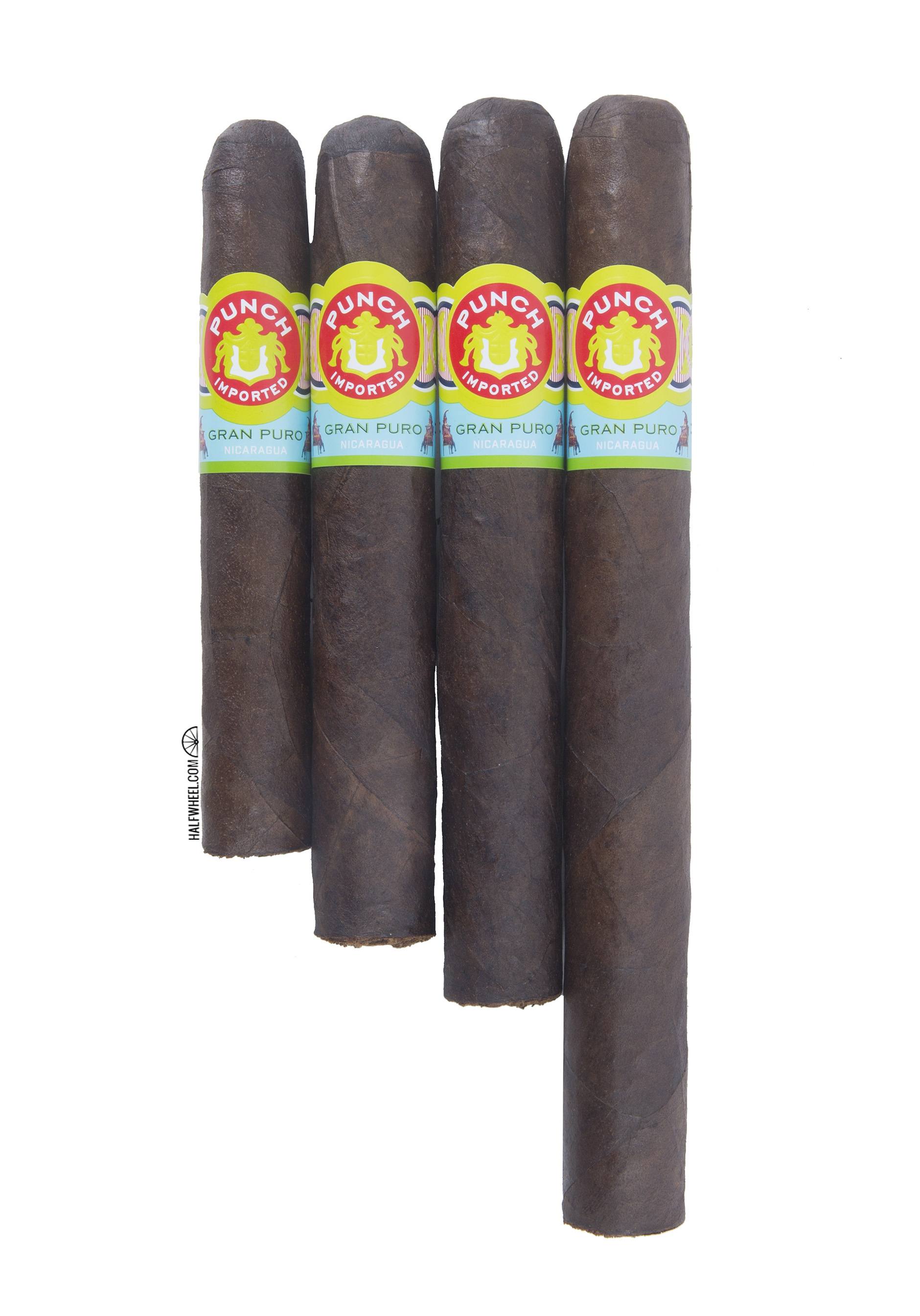 There are two things that capture my attention immediately after I take the Punch Gran Puro Nicaragua out of the cellophane: first, the band; second, the wrapper. The former is a departure for the line, drawing on highlighter yellow, blue and green for a bulk of its color, while preserving the traditional red circled logo in the middle of it all. Additionally, very small pictures of the Mr. Punch mascot flank the wording on the bottom of the band, and they are just big enough for me to make out some of the detail. As for the wrapper, it is much darker and oilier than the story announcing the cigar led me to believe. It is an incredibly dark shade of brown, with noticeable vein structure, plentiful tooth and an oily sheen that is quite impressive. The cigar itself is generally quite firm with a few soft spots among the three samples, and the roll on each is quite good with clean seams and variety of quality for the cap; two are good but one is quite sloppy. The aroma from the foot reminds me a bit of room temperature Coca-Cola with its sweet and syrupy offering, which gets followed by a bit of maraschino cherry, and slight touches of pepper, smoke and barnyard, depending on the particular cigar. The cold draw is good as far as air flow, though each leans just a touch loose. It’s drier and more wood-forward than I was expecting, but there is a bit of buttermilk creaminess to be found as well as varying amounts of pepper and spiciness on the lips.

The airflow of the Punch Gran Puro Nicaragua makes getting a good amount of smoke billowing out of the cigar rather easy, carrying a medium-plus flavor and body with it that is marked by a bit of earth and complemented by a mix of woods, subtle but noticeable pepper and a cola syrup sweetness that is very smooth in how it coats the other flavors and in turn the tongue. The pepper is much more pronounced via retrohales, almost to the point of being a bit too prevalent and sharp, and the flavor gets a bit too biting and raw in one sample. Just as the cigar has burned a bit over a quarter of an inch, the pepper takes a big step forward and steals the spotlight while delivering a fairly brash flavor and aroma. The cigar begins to pivot and I get a mix of grilled pork and chocolate, and while I’m tempted to call it a bit like Mexican mole, the mix and complexity aren’t quite right and there’s a tangy bark note that really goes against the overall idea of the profile. Through the first third, the cigar has performed near flawlessly, with an incredibly smooth draw, plenty of smoke and a sharp, even burn line. As it comes up, the pepper increases and sharpens a tick or two as well. 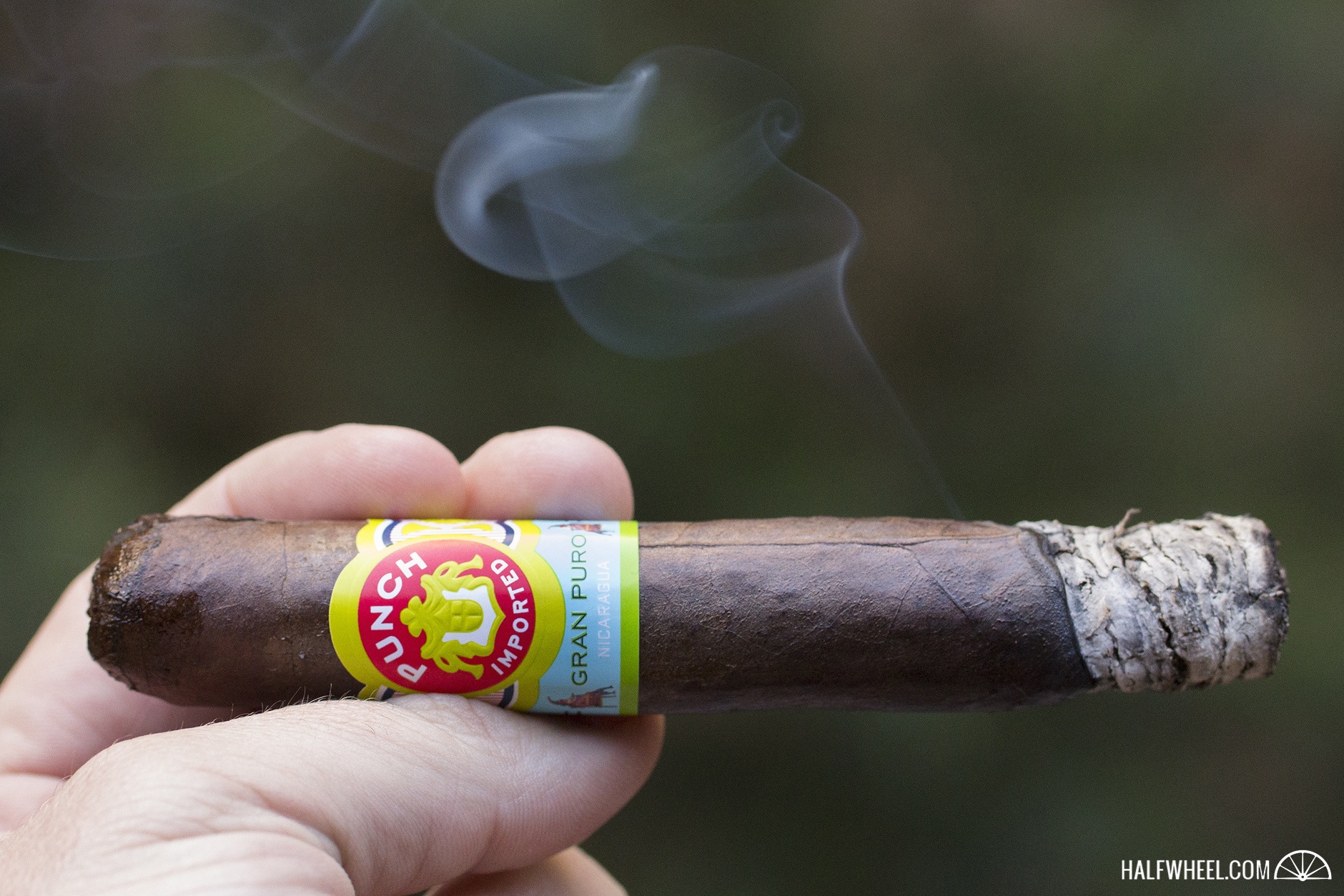 The second third picks up right where the first third left off, at its best with crisp pepper that I still find just a touch too much for my nose, and at its not-so-best with a slightly sour and unrefined flavor profile that isn’t sitting well on my tongue. The profile begins a slight retreat in terms of intensity and hits some pretty good notes around the midpoint, with faint cocoa powder on par with or slightly dominant of the pepper, at least for a few puffs. The smoke has also turned a bit thinner and more delicate, something that helps the experience as well as it helps the more subtle flavors stand out. This section comes to a close with a shift away from the chocolate sweetness that was found earlier and begins to dry out fairly quickly, picking up dry lumber notes along the way while the smoke thins out in its texture. 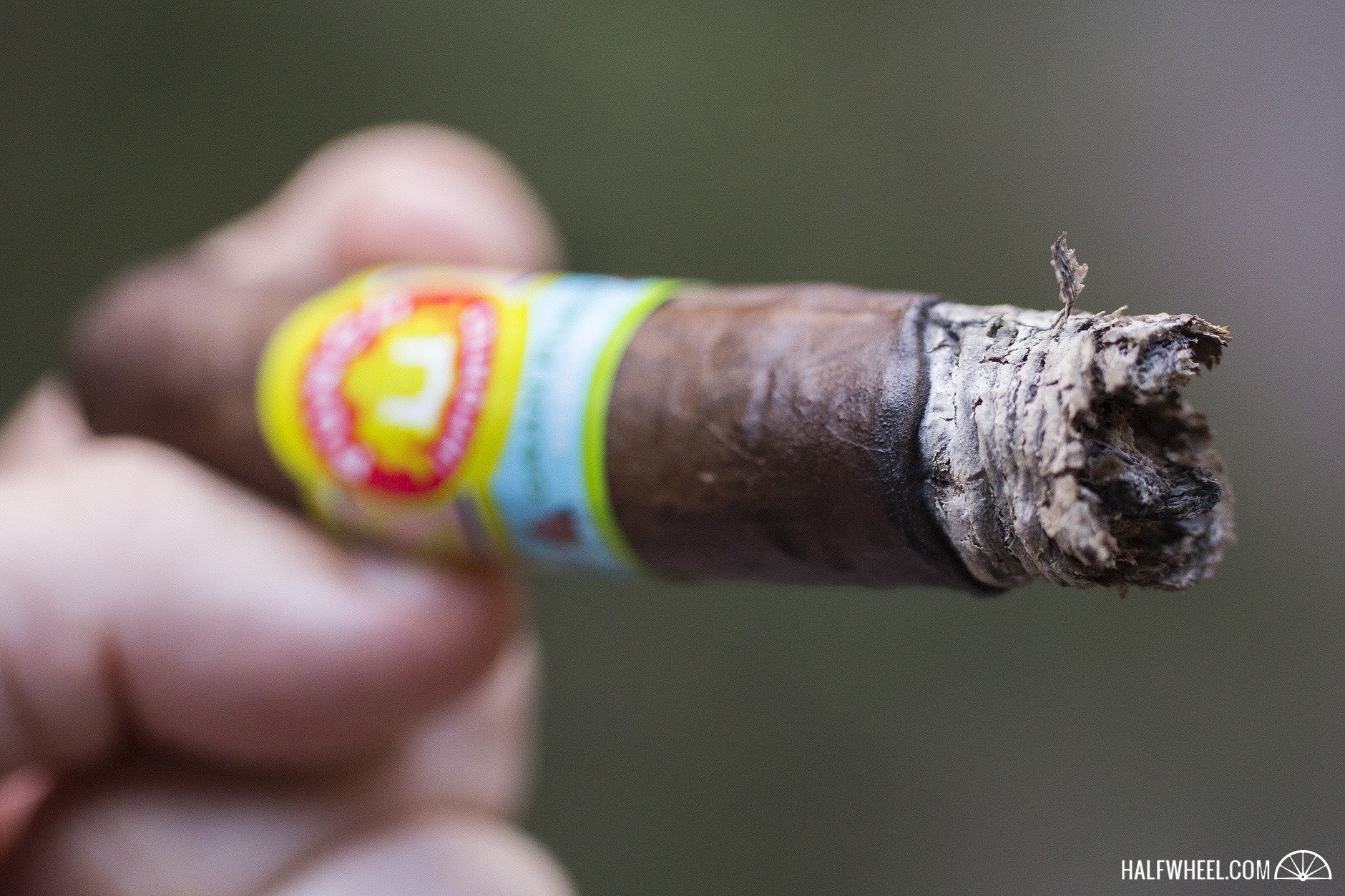 There are a few burn issues in the final third; on the first sample the roll is noticeable softer at the head, something that could indicate a bit of underselling or some slightly damp tobacco as the give is just subtle enough as to not suggest one or the other. All three samples see a return to a medium-full bodied smoke, and the flavors follow in almost lockstep in their intensity. There’s a new mix of flavors in the final inches of the first sample, with bark, pepper, a bit of red chili flakes and a very subtle citrus sweetness that picks the profile back up just as it appeared to be coasting into its finish. The second sample was much harsher, with brash pepper and an off-putting wood note that simply did not sit well on the palate, while the third offered earth as the base note, with pepper and chili flakes driving the tingling sensation on the tongue. Burn issues also creep up in each sample, with the second and third samples struggling the most and necessitating several relights. The Punch Gran Puro Nicaragua manages to finish on a decent note, however, blending a bit of chocolate brownie with black pepper and just a bit of damp earth to impart a pleasing final few puffs. I found the Punch Gran Puro Nicaragua 5 1/2 x 54 presenting me with a bit of a Goldilocks problem: one cigar was too rough and bitter, one struggled to burn and offered some rougher flavors, while the third was just about right in terms of both flavor and combustion. The combination of Connecticut broadleaf and Nicaraguan tobacco is a familiar one, and at its best the Punch Gran Puro Nicaragua does a good job combining the two into flavors that can be complex and lush, with good levels of sweetness to balance the heavier earth and pepper notes that are more than abundant. Yet I find myself thinking too much about what the cigar did wrong, as when that balance is thrown off, the results are quite bad, and when compounded by burn issues make the cigar quite off-putting. That all said, I still have hopes for this line, as I think it can deliver a very enjoyable experience when all the components align; hopefully that's the cigar you select should you end up trying one.