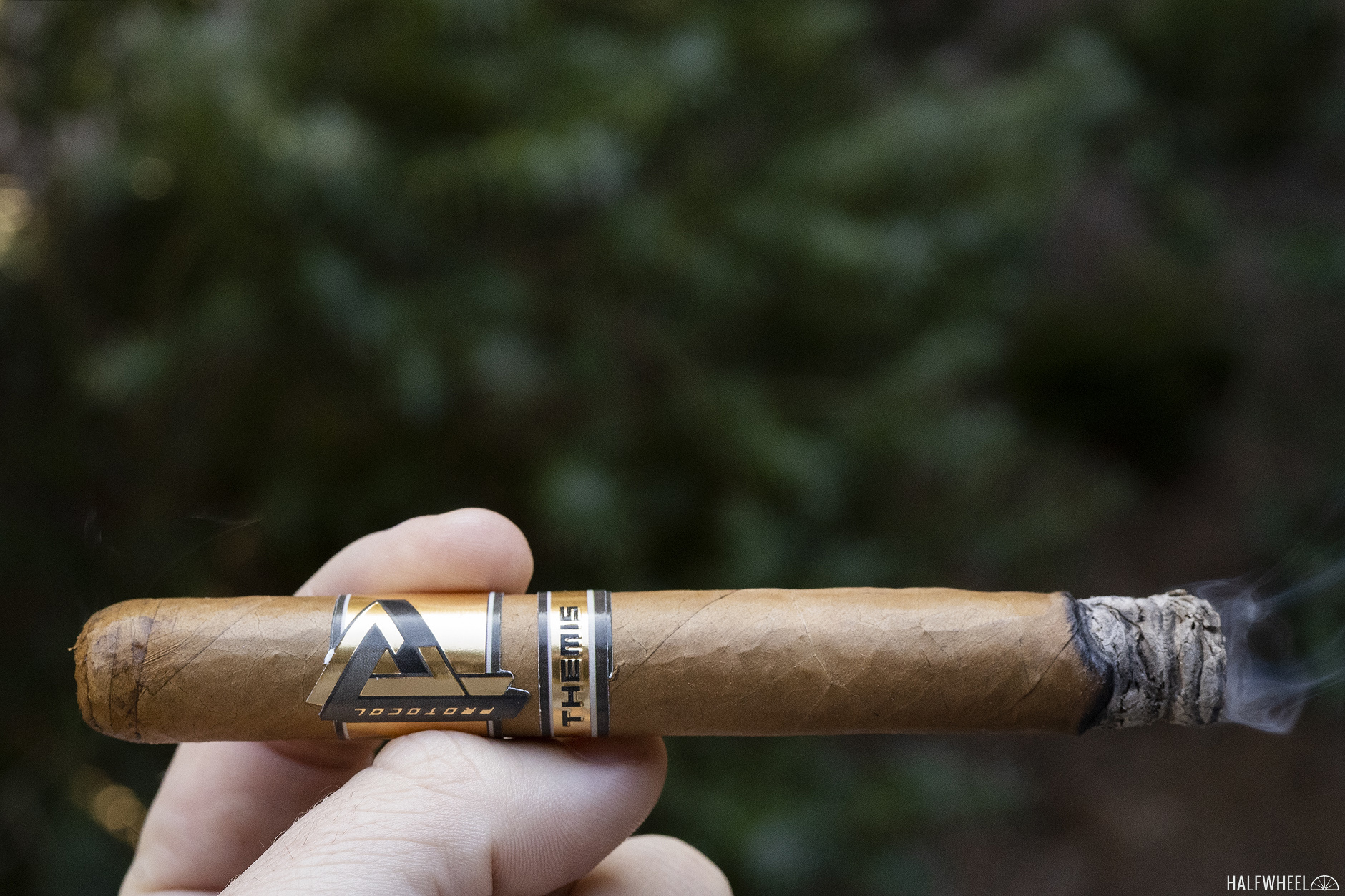 Fans of Cubariqueño Cigar Co. know that the company has a decided theme for the names of its cigar lines, selecting terms and names from law enforcement and criminal justice.

In the case of Themis, while the name might not be immediately recognizable, the image of a woman holding a set of balanced scales should come to mind. That woman is Themis, an ancient Greek Titaness who is often referred to as “the Lady of good counsel,” and one who symbolizes order and law.

The line debuted in 2017, using an Ecuadorian Connecticut wrapper over a binder and filler that comes from Nicaragua. The blend was the brainchild of William Agathis, one of the partners in Cubariqueño, and his name appears on the back of the band as a nod to that fact. Agathis blended the cigar with Hector Alfonso Sr., the director of operations for Espinosa Premium Cigars and La Zona Cigar Factory, where the cigar is made.

It debuted in two sizes, a robusto and toro, but it wouldn’t be long before two more size were released. In July 2018, the company added a lancero vitola, then in September of that same year, the company created a corona gorda vitola as an exclusive for Famous Smoke Shop in Easton, Pa, bringing the total number of sizes to four.

“I believe this blend shines the best in this vitola,” said Bill Ives of Cubariqueño, at the time of the corona gorda’s announcement. He added that he believed “this might be our best cigar yet.” 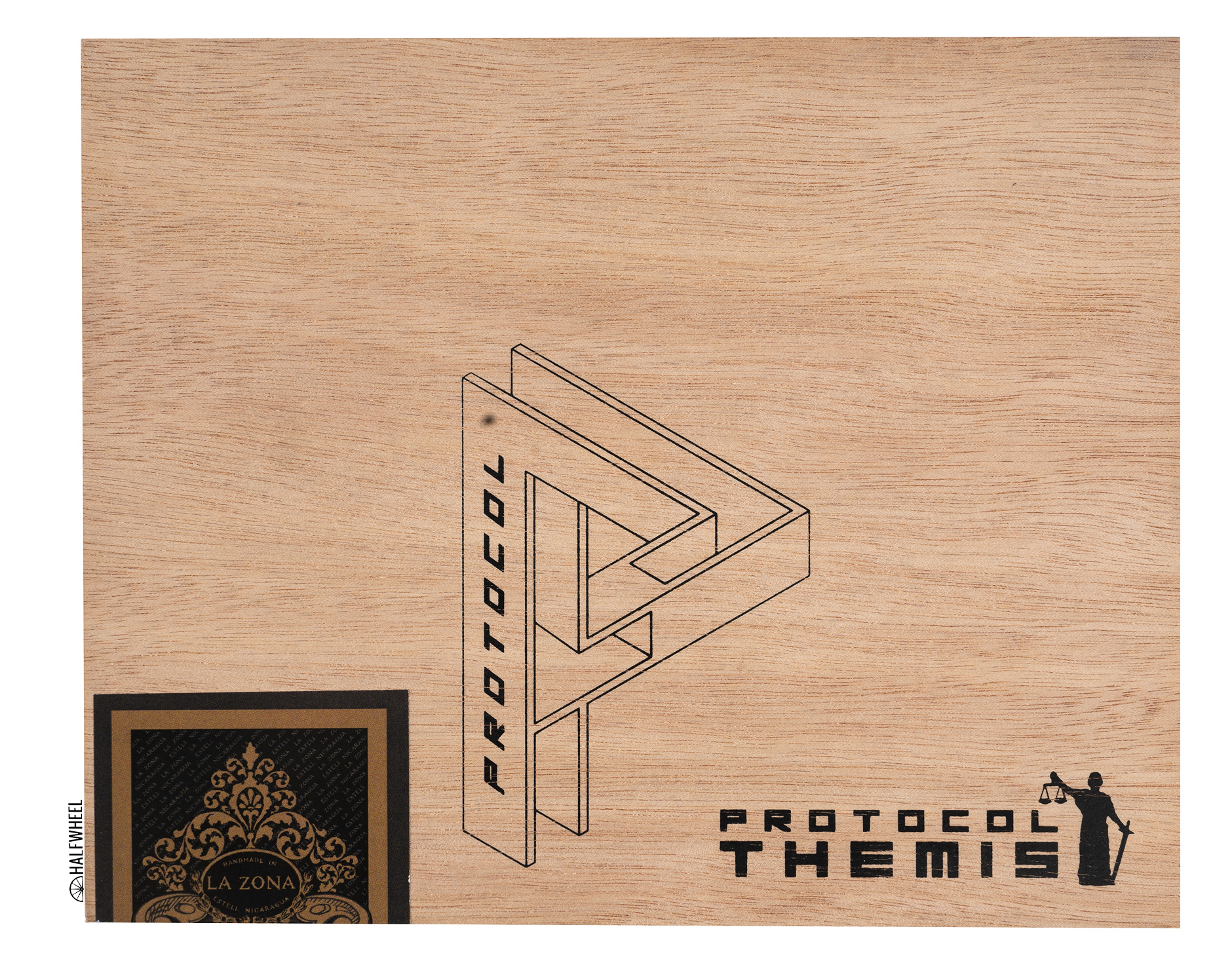 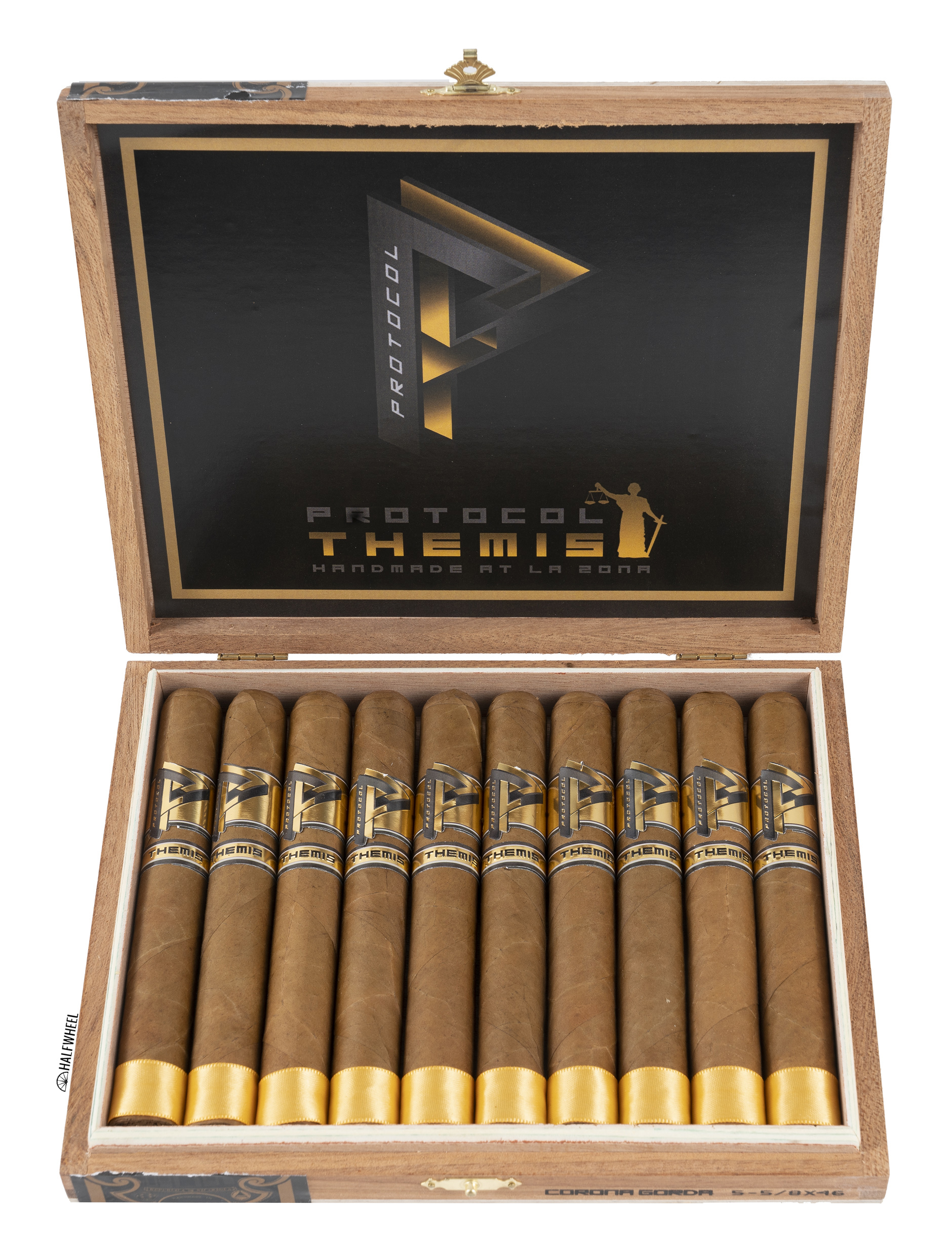 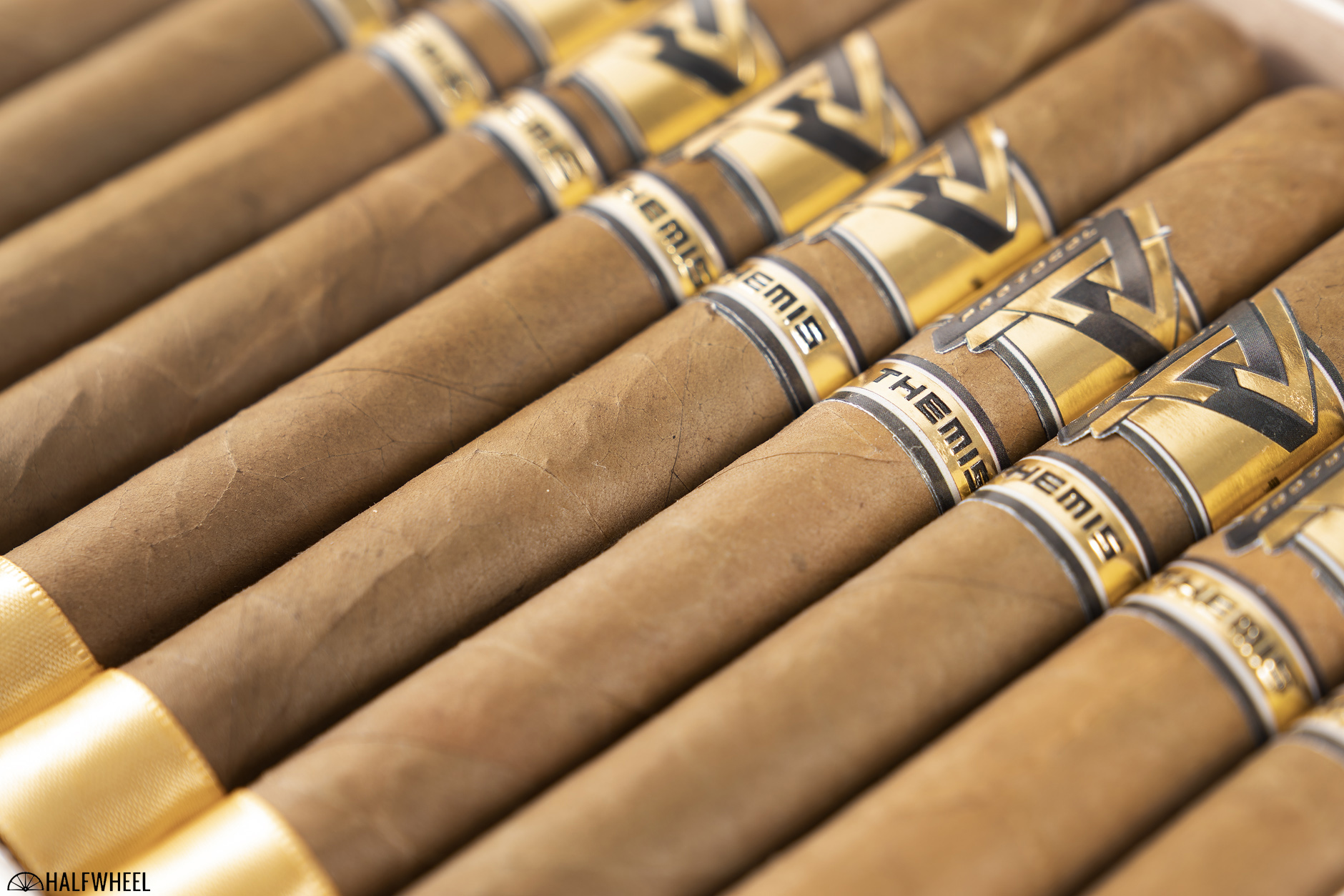 The corona gorda size wouldn’t be an exclusive for very long, as the following summer the company announced that it would be making it available to all of its accounts at the 2019 IPCPR Convention & Trade Show. Just like it did as an exclusive, it would be offered in 10-count boxes with each cigar priced just under $10. 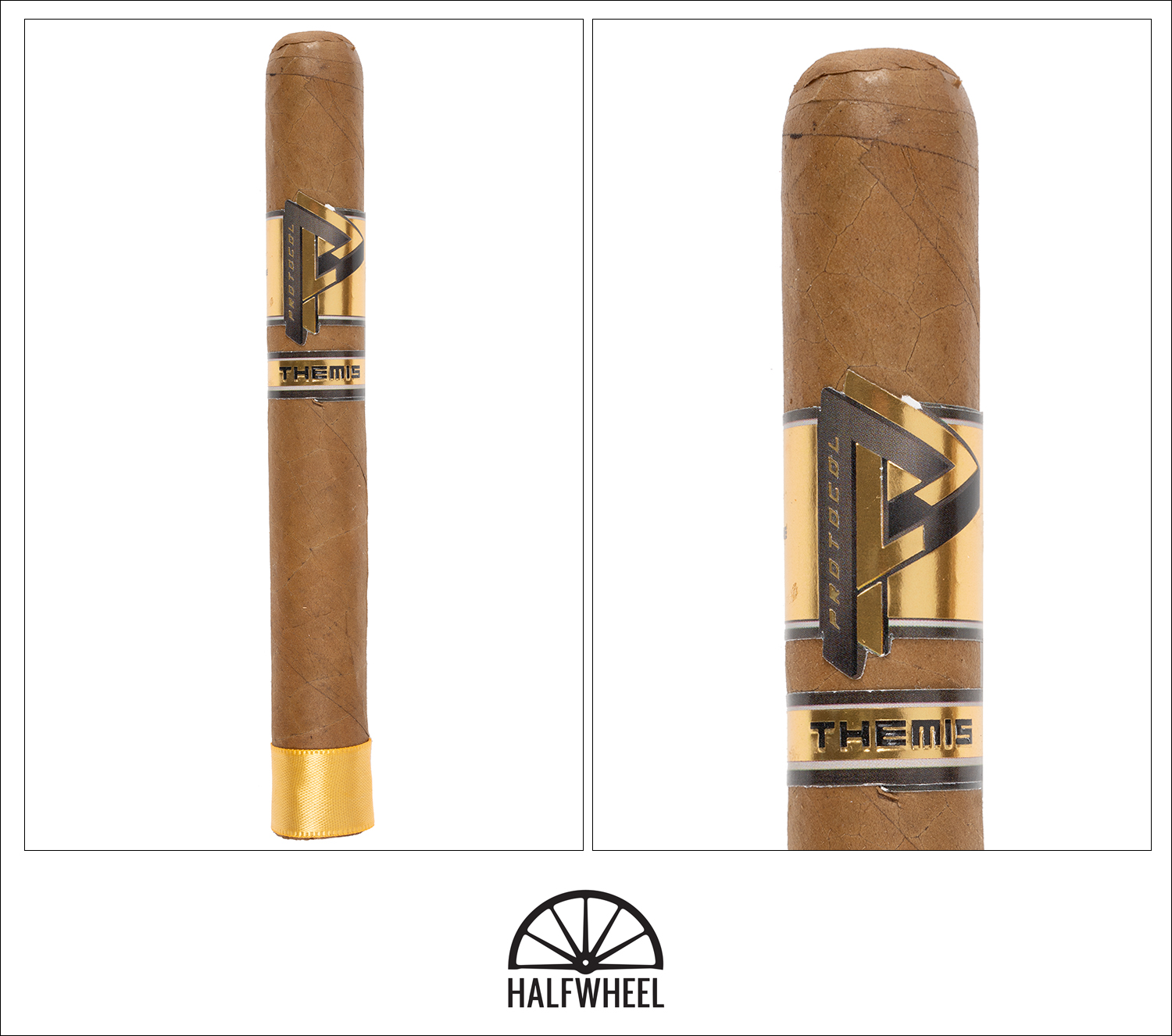 The Protocol Themis Corona Gorda goes with a color scheme on the lighter side of the cigar scale, as the wrapper is a golden, lightly-tanned leaf with a few small veins and a dry texture for the fingers. It is complemented by three bands: a primary and second band that have a metallic gold and what looks like graphite grey color scheme, and a foot band made from a ribbon with a buttery yellow color that is markedly different from the bands but still seems to pair decently with the wrapper’s color. The cigar is rolled firmly, with a bit of give at the foot and head, but otherwise no discernible soft spots. It’s also rolled well from a visual perspective, showing no bumps or depressions, finished off by a well-constructed head. It is a leaf that seems to show its seams more than others, so when there is a visual distraction, that’s generally where I find it. I struggle to pick up much of an aroma off the foot of the cigar; there’s a bit of butter but not much else that stands out. I could stretch and say sweetness from the butter as well as some bread undertones, but I feel like I would be working for those aromas more than most people would. The cold draw is near ideal in terms of airflow with one sample a bit on the tight side. There’s a bit more of a light bread flavor, but it’s not bursting at the seams with flavors. I could also make the case for a bit of plain popcorn and the occasional bit of char, but both are sporadic and mellow.

While the Protocol Themis Corona Gorda didn’t offer much for the senses before being lit, once burning there is a good amount of thin black pepper that wakes up the palate, particularly when smoking this cigar first thing in the morning. A bit of white pepper makes an appearance as well, though I wouldn’t call it prevalent. There is some variance to this introduction, and one sample tasted a bit too charred for my liking as my first cigar of the day, while another was much cleaner. Once woken up, the palate starts to get the kind of creaminess one might envision from a cigar wearing an Ecuadorian Connecticut wrapper, very soft and easy on the palate, making for a very enjoyable foundational flavor. While not the deepest or most complex of first thirds, it is certainly enjoyable and in its better expressions, a very palate-friendly profile.

The second third of the Protocol Themis Corona Gorda sees the cigar develop a bit more robustness by way of its pepper, seeming to let the Nicaraguan binder and filler do most of the talking. The creaminess found in the first third has more or less disappeared, though I have to think it’s more just getting overshadowed. The net change is that the profile is a bit drier, with wood notes coming out around the midway that further that progression. Black pepper is a bit more subdued, or at least has other flavors to compete with for balance, something it continues to do as the burn line gets close to the final third. The draw is generally very good, and other than one sample the performance of the cigar has been problem-free. I’d peg flavor just above medium, with body and strength right around the medium mark. While the changes in the second third of the Protocol Themis Corona Gorda were fine, I find myself wanting some of the creaminess from the first third to return and get the cigar into a more balanced and complex profile. It makes a bit of a slow return, but with the burn line steadily progressing to the end of the cigar I’m aware that my ideal might not have time to develop. As the bands come off, the cigar seems to be trying to deliver more creaminess, but a bit of char on the black pepper emerges as well, something that sticks around the rest of the way. That flavor and sensation tingles the taste buds after each puff and pushes it just north of medium in terms of flavor intensity, while body and strength are still right around medium, which seems to be a good spot for them. The technical performance continues to be very good, with plenty of smoke production and an even burn line. I think it's safe to say that there are a lot of cigars on the market that are in the same space as the Protocol Themis Corona Gorda, that is an Ecuadorian Connecticut wrapper over a Nicaragua core that attempt to create what has been referred to as "not your father's Connecticut," or simply a more robust cigar that doesn't completely shy away from the mellower end of the flavor and strength spectrum. For its first third, the Protocol Themis Corona Gorda does that about as well as any cigar, balancing creaminess, pepper and a bit of sweetness with very good results. From there, the performance tapers off just a bit, mainly due to the more robust core flavors seeming to overshadow everything else. It's not a bad profile by any means, as I can't say I didn't enjoy each of the three samples from start to finish. That means that it becomes a matter of how much what is offered is enjoyed, which can sometimes become an exercise in finding smaller details to latch onto. My one request is that I just wanted more complexity from the cigar after that first third. It got my attention early, but never seemed to push beyond that. Much like an artist or athlete needs to be pushed to find that next level performance, that's what I wanted from the cigar. That said, I'd have no problem reaching for this without hesitation, and think that it could be a cigar that could work for a lot of palates and smoking situations, making it an easy recommendation to pick up if you see it.