In May, Cubariqueño Cigar Co. announced that it would be adding a 7 1/2 x 38 lancero vitola to its debut Protocol line. While the cigar got its first retail release in May, Bill Ives and Juan Cancel featured it as one of their new releases at the 2016 IPCPR Convention & Trade Show alongside the Protocol Probable Cause line.

The slender vitola was the first added since Protocol was announced in April 2015 and released the following month in two sizes, a 6 x 52 toro and 5 5/8 x 52 corona gorda. Made at Erik Espinosa’s La Zona Cigar Factory in Estelí, Nicaragua, the cigar gets its name from the pair’s law enforcement background. The blend features what is called “quadruple ligero” from Nicaragua in the filler with a Nicaraguan habano binder and Ecuadorian habano oscuro wrapper.

For the lancero vitola, the blend got a slight tweak to accommodate the size but promised to keep the same core flavors of the original sizes. 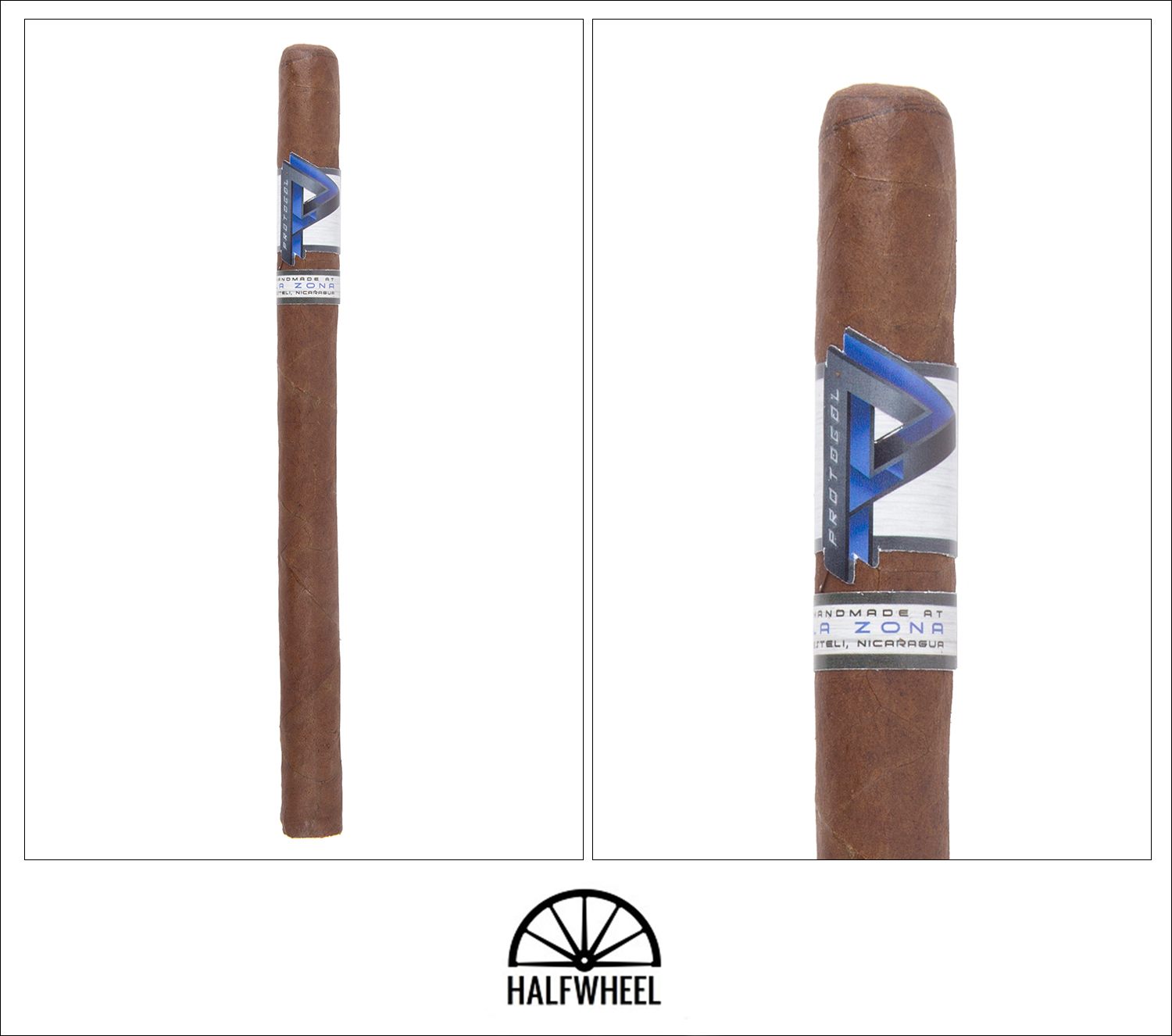 The Protocol Lancero has a medium to medium-dark brown wrapper with a very visible vein structure but no major veins sticking up.  Visually it is a well-rolled cigar, with the fingers largely confirming that while very infrequently coming across the occasional spot that feels a bit soft. The cap seems well applied and easy to clip without inflicting any undo damage. From the foot I get an initial aroma of brown sugar but without the overt sweetness, and instead more a cool and spicy profile with a bit of had to place aroma to dive into behind that. The range of ideas that quickly come into my head include pepper, mint, ice cream and a combination of all of those. The cold draw has good air flow that delivers a tongue tingling hybrid of pepper and spice, with the former leaning white and the latter leaning Asian.

The Protocol Lancero opens with an engaging and enjoyable bite of red chili pepper flakes mixed into some sort of sauce that seems to have a place in my memory yet I can’t recall from where. It’s not overly aggressive either on the palate or in the nose and quickly picks up a bit of chalk to give it an interesting complexity that has my mind searching for the appropriate descriptors. Thick, creamy smoke is plentiful on each draw while dropping off at rest, right in line with what I expect from the vitola. The pepper begins to simplify a touch and the spice almost completely leaves by the first drop of ash just shy of an inch in length, and the cigar moves into much more familiar territory; medium-bodied with some damp bark and suggestions of chocolate on the palate, with pepper-forward retrohales that are clear and lingering with their intent. By the second inch the cigar is picking up a bit of creaminess while not letting completely go of the pepper. The start of the second third has me reflecting on the start of the cigar and which is more enjoyable: the interesting yet enjoyable and hard to place first half inch, or the more familiar yet somewhat less sensory exciting place that the cigar is at currently. There is a certain lushness to the cigar thanks to some damp earth and pepper, with nibbles at coffee and dark but not bitter chocolate as well. It’s in this section where the pepper picks up its first touches of harshness, though it is relatively mild and not a consistent experience from sample to sample. It’s a fairly quick moving section as well, with black pepper returning to prominence after a brief hiatus. The burn of the final third is much more particular than it had been in the first two thirds; in particular the unspoken demands the cigar seems to lay out in order to stay properly combusting. While the first half of the cigar allowed for more space between puffs, the second half encourage a slightly quicker rate, and the first sample suffered a bit from needing to be relit a couple of times, though the effect was rooted more in frustration than it was ill effects on the flavor, which has largely held steady save for a touch more earth that is coming through. It finishes up with a few more combustion issues, medium-plus in body and strength, with enough of an inviting flavor to take it down to about an inch in length. The Protocol Lancero has one of the more interesting combinations of pepper and spice that I can remember, and it will likely be what I most remember about the cigar. The burn issues in the final third were annoying but likely something that will be resolved, and the incredibly long smoking time might come as a shock, but with an abundance of ligero and oily leaves in the blend, it is something that shouldn't be quite as surprising. The Protocol blend has impressed me so far and this slender vitola provides an interesting and enjoyable option for the promising line.