If there’s one booth that seemingly never fails to disappoint at the annual IPCPR Convention & Trade Show, it’s Prometheus. Keith Park and company roll out some of the most eye-catching accessories on the show floor, and that’s in addition to his line of limited edition Arturo Fuente-made God of Fire line as well as his Sencillo and Angelenos lines.

Measurements notwithstanding, the two lighters are nearly identical, though because of the smaller size, the Magma T forgoes one of the two punch cutters that the Magma X features on its base, and is between $10 and $30 less expensive than its bigger sibling, depending on which finish you prefer.

When it comes to holding the lighter in the hand, opening the lid, and then engaging the ignition, the Magma X seems to want to take me in opposite directions. Holding it in my right hand with my thumb on the ignition and index finger curled around the body, my natural inclination is to flip the lid up with my thumb, but instead it’s the index finger that must do the job, lifting it back towards the hand. Then the thumb can push forward on the ignition and get the flame started. It’s a rather minor thing, but something I noticed in the first days of using the Magma X and wanted to note as it definitely felt different from other lighters I have used recently. It’s not even so much the dual direction, but rather having to use to different fingers in the process. 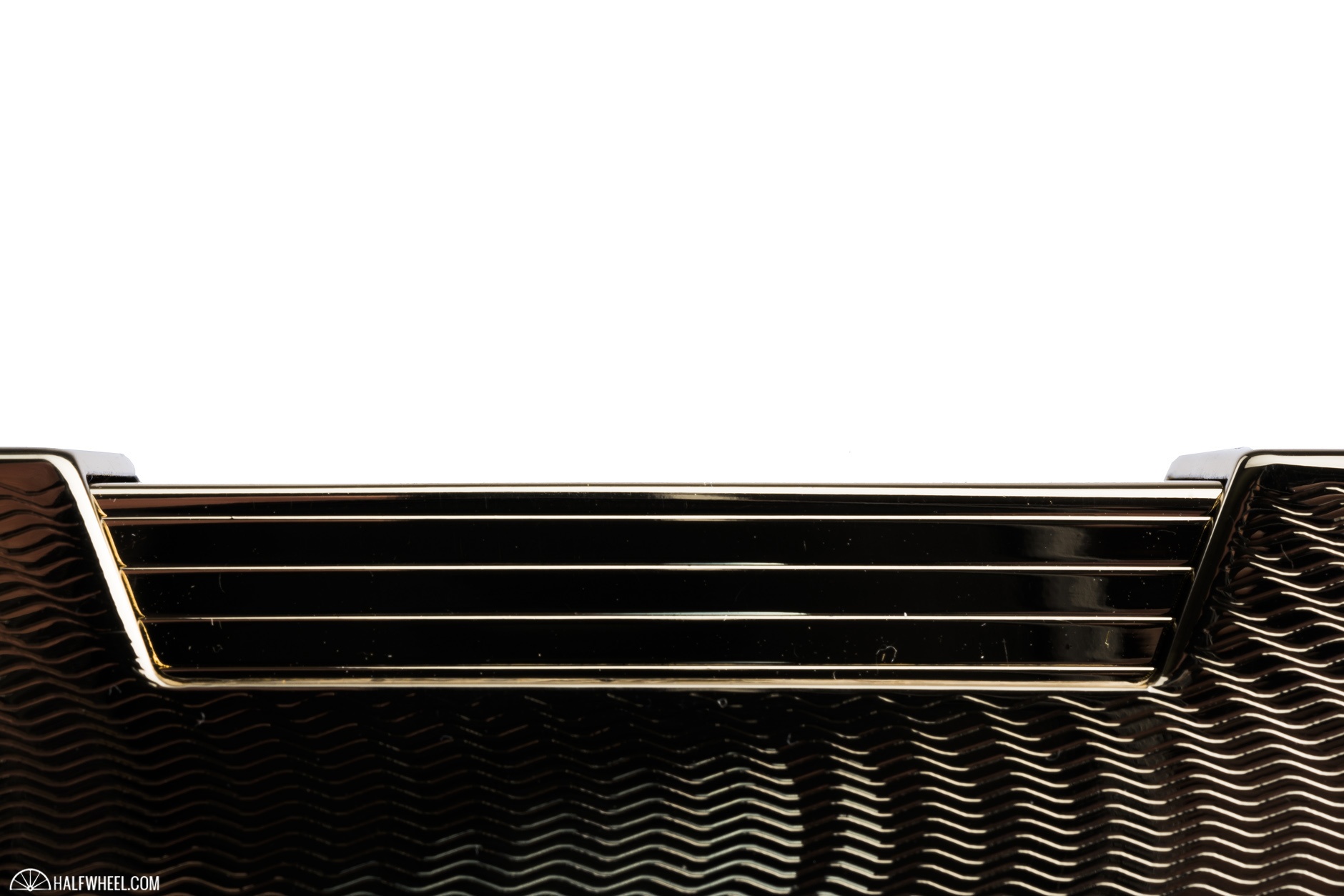 Taking a slightly different approach to dealing with this, I also tried turning the lighter around in my hand so that it’s the thumb that flips up the lid and the index finger that squeezes the ignition, something that works about as well, though feels equally odd in the hand, at least for the first few lights. After that, and much like anything, muscle memory sets in and it becomes a more familiar process.

Whatever way you choose to hold the Magma X, the lighter gives you a three-torch flame, with each of the torches pointed straight up and not angled together. The result is a flame with some good width that is best suited to larger ring gauge cigars. On smaller ring gauge cigars, the Magma X works quickly but teases the sides of the cigar more than I would like; one remedy is to simply hold the lighter farther away from the foot than what might be considered normal, or simply to reach for a lighter with a bit less flame. 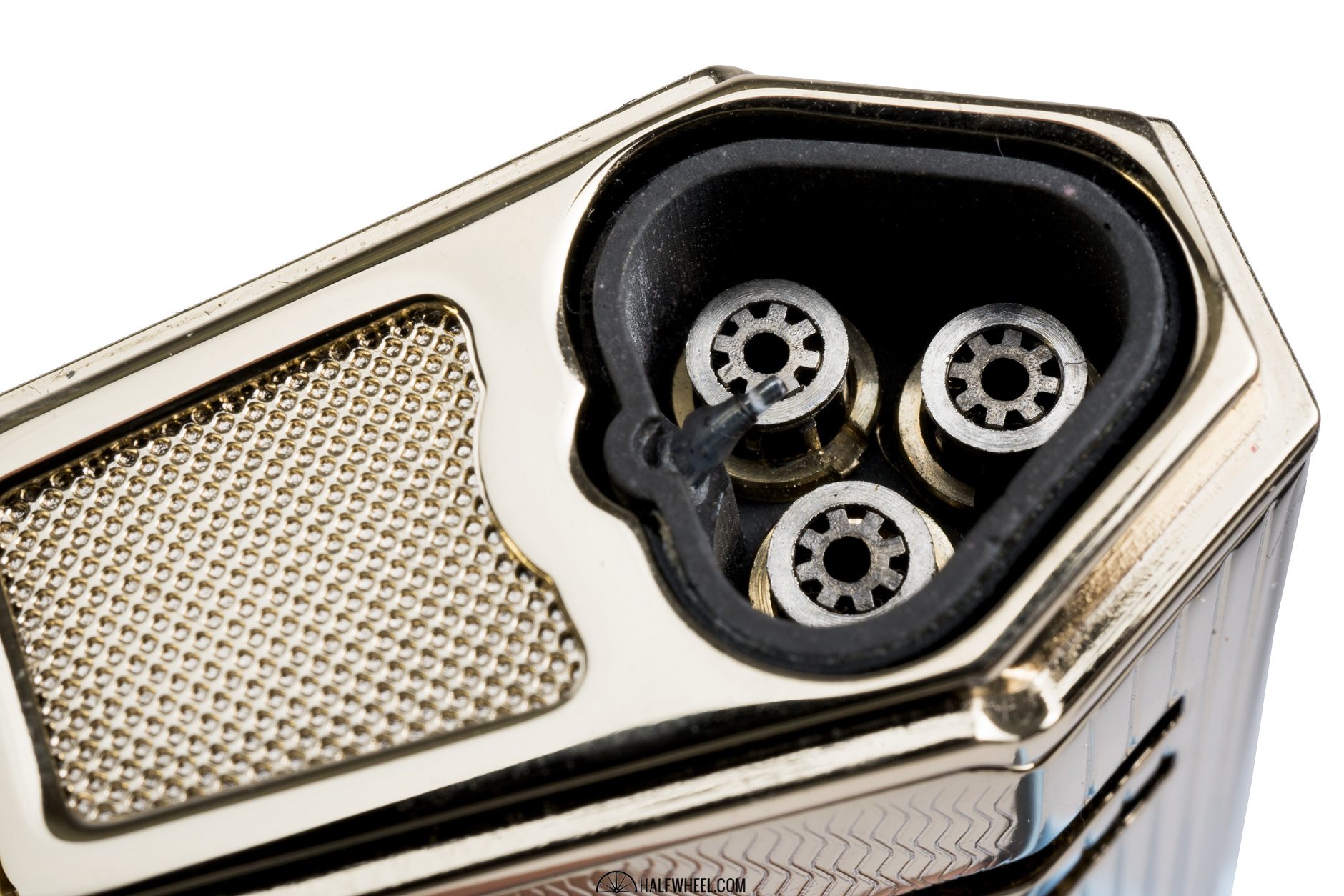 There’s also the option to turn the flame down, which is done with the help of a small flat head screwdriver or similar tool. The flame adjustment mechanism sits on the bottom of the lighter, with the midpoint between fully open and fully closed being about ideal in my use. There’s not a lot of need to add more firepower to what the Magma X already offers, though I did find it helpful in windier conditions. The lighter also will not light with the adjustment set to either end of the spectrum.

Another reason that I found it helpful to keep the flame setting conservative was fuel usage. In terms of fuel capacity, much of my thoughts on certain lighters tends to be anecdotal; the size of the tanks are rarely disclosed in any level of useful specificity, and if mentioned are generally just called “extra large” or something relative. 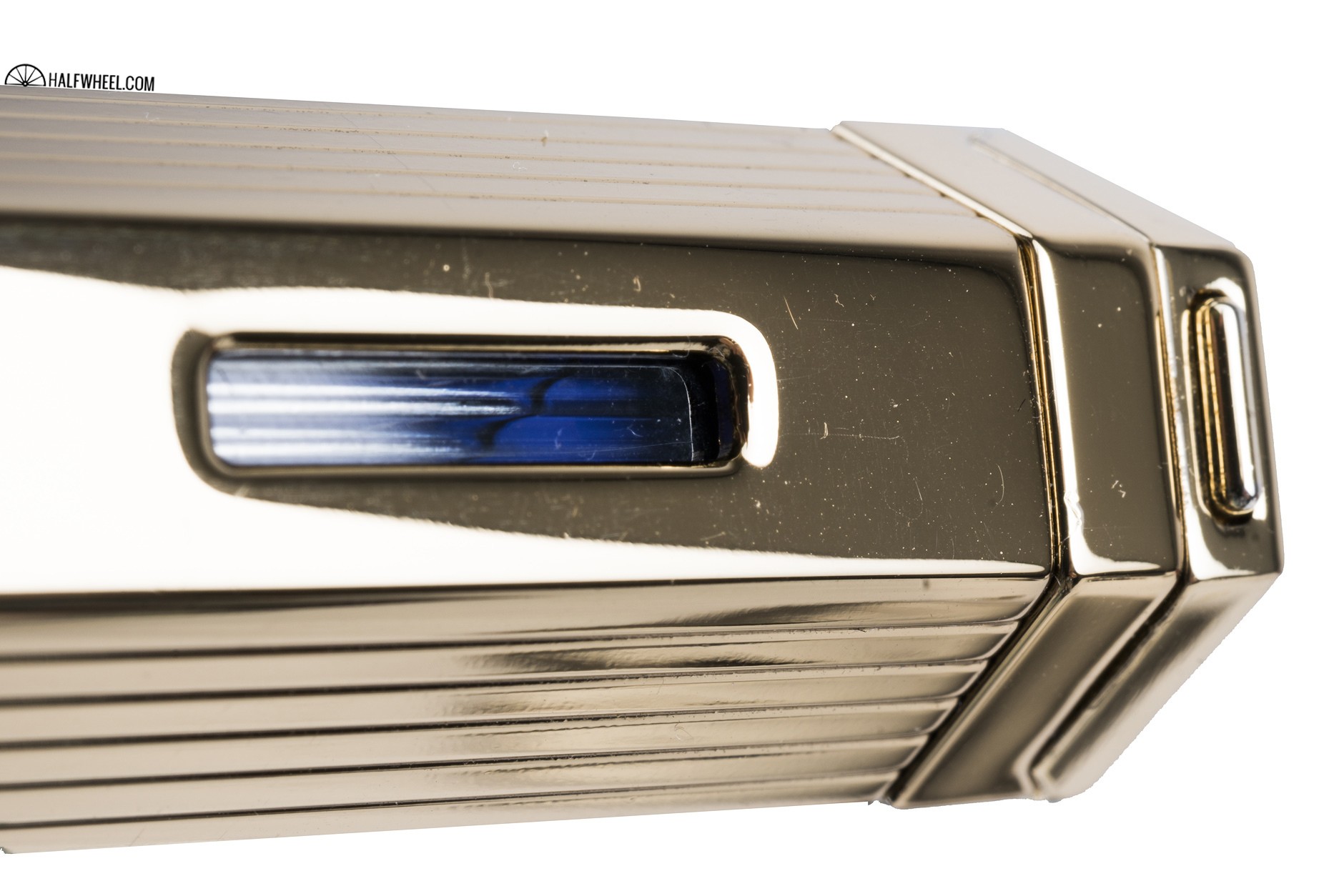 While I can’t speak to the relative tank size of the Prometheus Magma X, Keith Park told me that the Magma X holds 1.8g of butane, and mentioned that the Ultimo X holds 1.6g as a comparison. While I could generally get through five or six cigars without too much worry of running out of butane, I did start to develop the feeling that it needed to be refilled a bit more frequently than some of its competitors. If you always have a can of butane at the ready or don’t smoke a lot of cigars, this certainly won’t be much of a concern, however, if you do keep the lighter working steadily, you might notice this as well. It’s something my colleague Brian Burt noted in his review of the Ultimo X, saying that it “can quickly eat up fuel.”

The lighter does feature a good-sized fuel window on the side with a slightly blue tint to make the butane more visible, though I also found that to be more the source of disappointment than help as seemingly every time I looked at it, it was time to top up the tank. 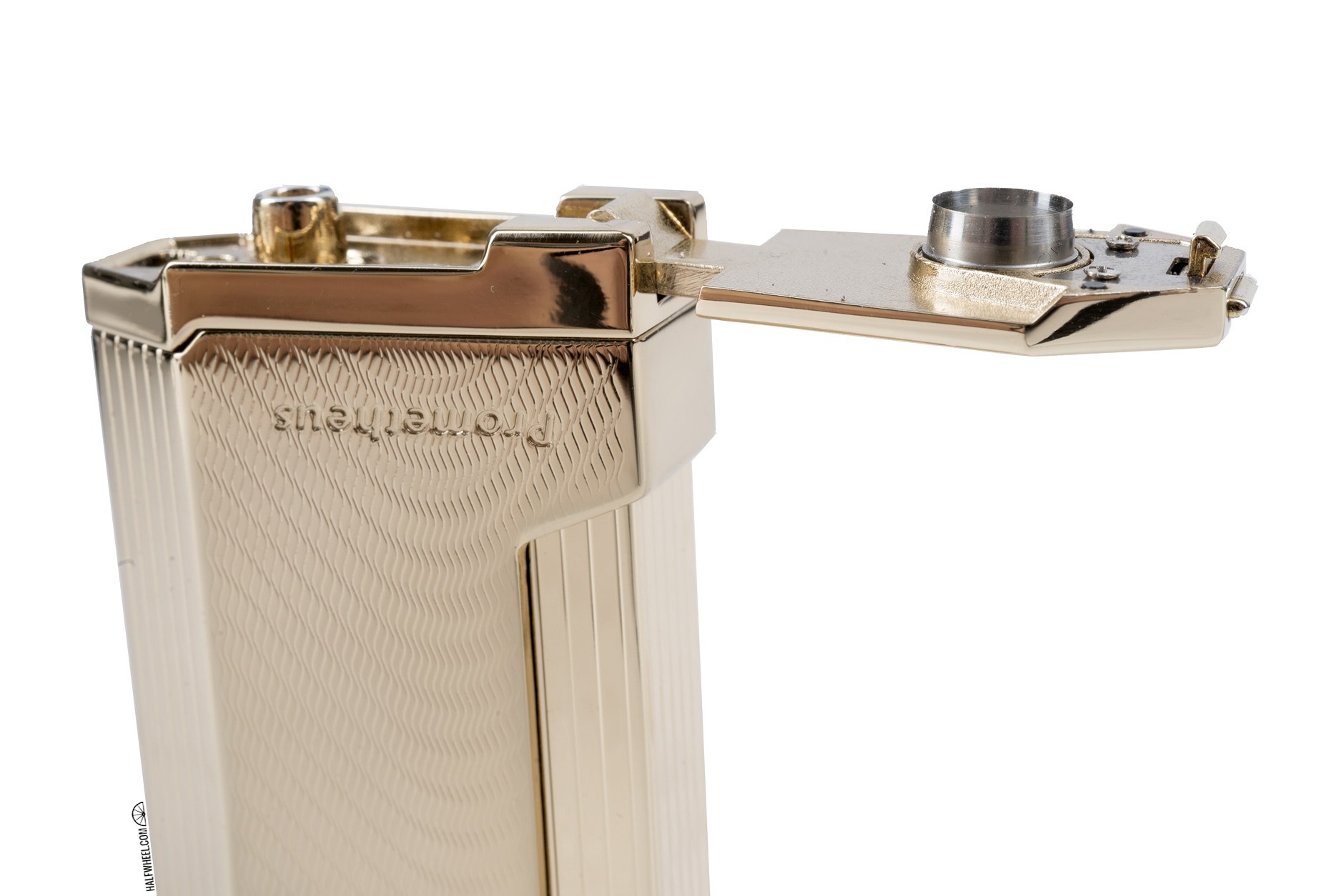 Also on the bottom of the Prometheus Magma X is a built-in punch cutter that holds two U.S. patents: 6,298,856 & 6,732,741, the former for the cutter and the latter for the flame adjustment valve that ejects the cut tobacco. I’m not much of a punch cut user but I did try it out a few times over the weeks that I used this lighter and it does work quite well, certainly enough to please those who prefer that style.

After just over a month with the Prometheus Magma X, I’m pretty well satisfied with how well it works, even though I’m not completely sold to make it my everyday lighter. I love the feel in the hand as it has some good mass, though as noted above there are other lighters that seem to have a bit better—or maybe more natural—flow in terms of getting the lighter ignited. I can’t recall the ignition system having many if any issues, and if there were it was either a result of being low or out of fuel, or me having the flame adjustment out of the sweet spot. 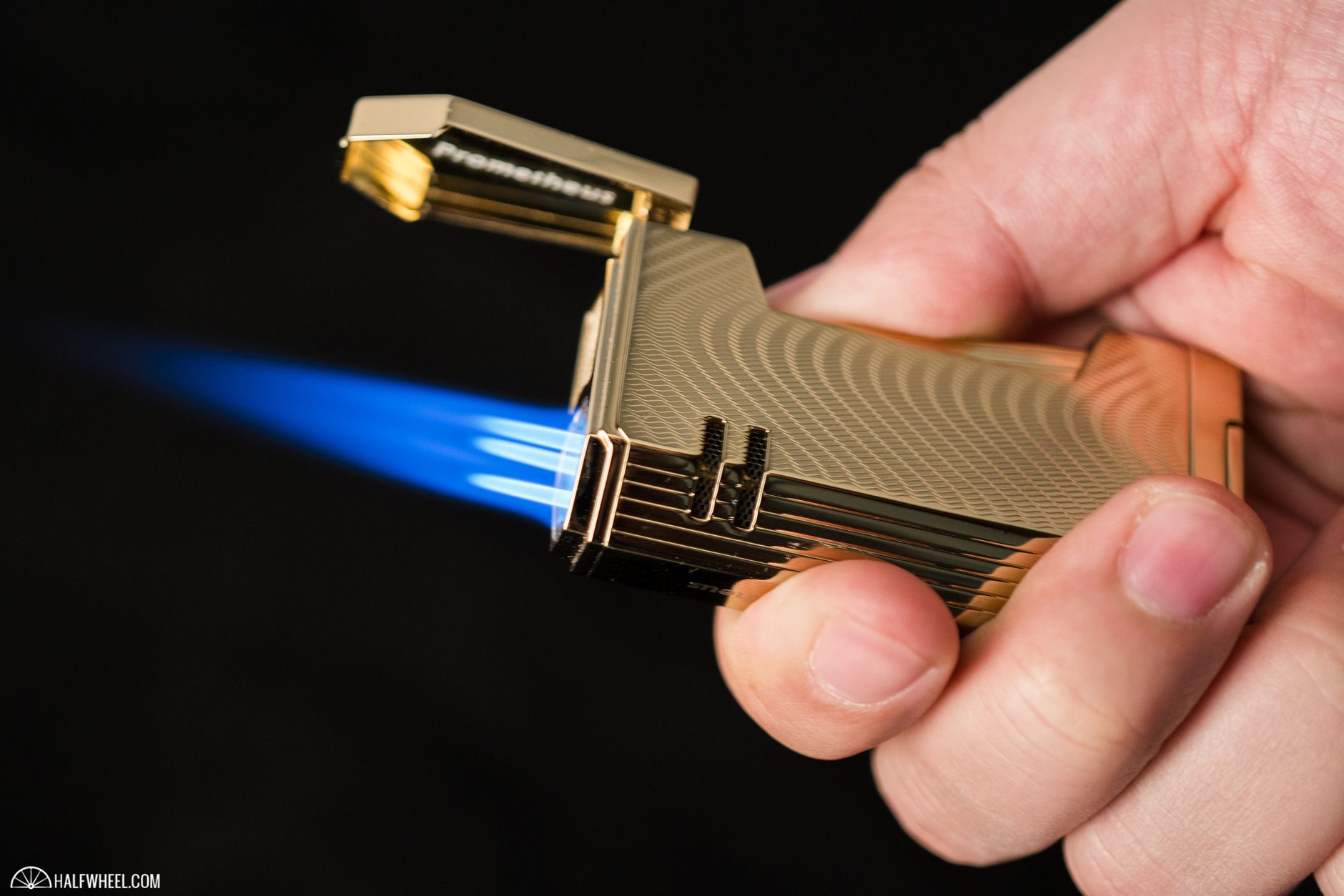 The flame itself is a bit bigger than I prefer, and as someone who smokes a bunch of sizes, from lanceros to toros and even some gordos, I find this configuration of the three jets to be a bit less versatile than I would prefer. While a single jet is pretty universally usable, I have gravitated to dual jets as my preferred utility lighter, as they can handle pretty much any size cigar without too much risk of charring up the sides in the process. The Magma X makes the person behind the flame exercise a bit more caution when it comes to smaller ring gauges, and while I think caution and patience are virtues when lighting a cigar, this could do some damage in rushed hands.

All in all, I’m quite happy with the Prometheus Magma X after just over a month’s worth of daily use, and feel quite confident in recommending it. It looks good, feels good, and works well, which is all I ask from any lighter. 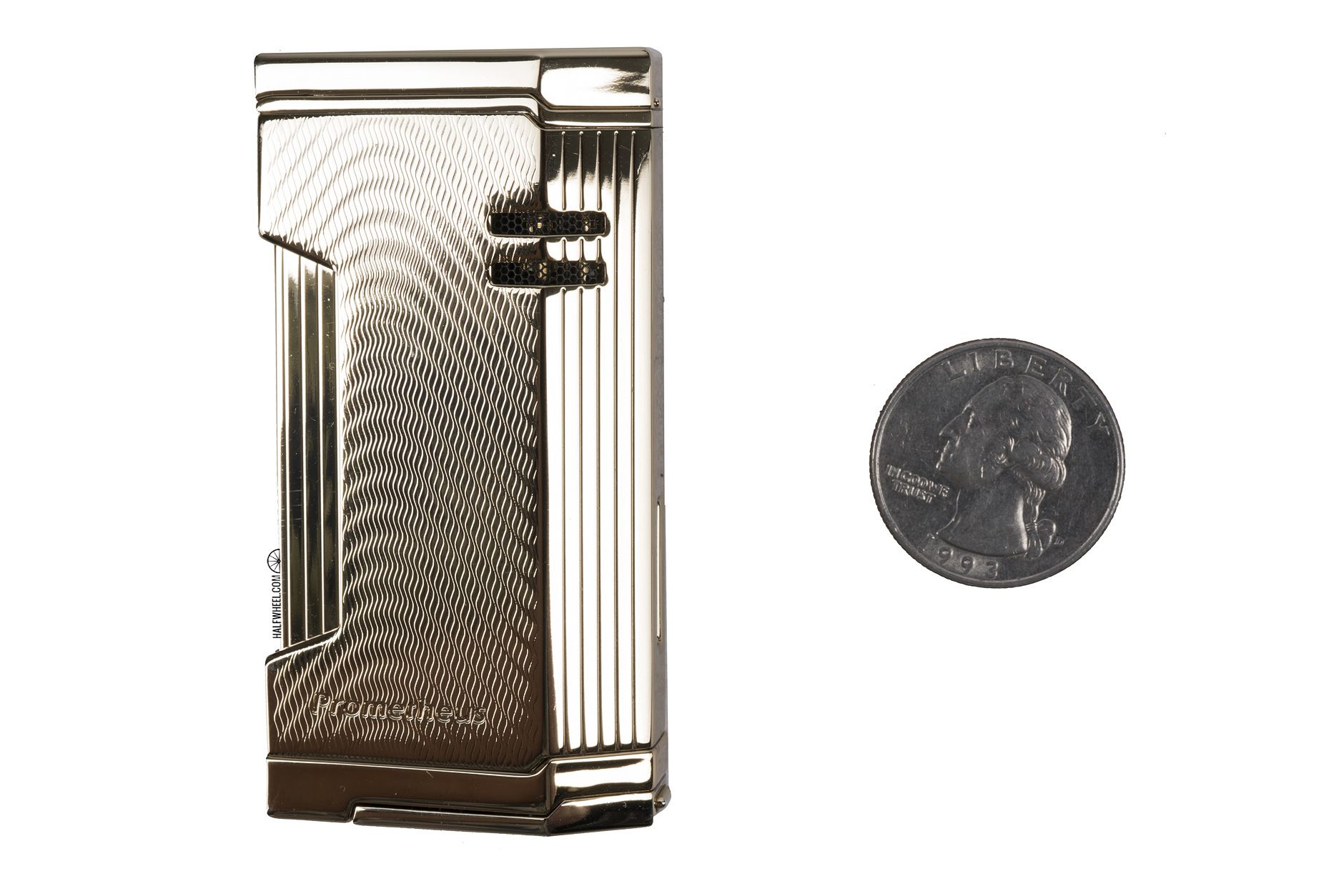 In the case of the 25th Anniversary designs, they are both limited to 500 serial-numbered pieces, while the others are not limited in quantity. Each lighter comes with a two-year limited warranty offered by the company.

The lighter used in this review was provided by Prometheus.