Thursday of the Procigar Festival more or less starts the same as Wednesday, and so at 8:40ish I headed down to join my bus for the tour I selected for Day 2, Tabacalera Palma.

I’ve been to every Procigar tour at least once and most of them I’ve done multiple times, including Tabacalera Palma. Similar to De Los Reyes yesterday, this is my third Procigar visit to Tabacalera Palma, though one of those visits was a joint tour with PDR Cigars. If you are curious about that previous visit, you can read about it here. Like yesterday, our morning started with a bus ride to a tobacco farm, though this time it was a much shorter trip to the Jacagua farm. While not the muddiest tour I’ve ever been on, it was muddy enough that our smaller tour bus didn’t even bother attempting to make it into the farm and so we walked on what was relatively dry land into the farm where we were more formally welcomed to the farm by José Manuel Blanco, son of José “Jochy” Blanco of Tabacalera Palma. Immediately, we were given cigars, hats made just for the occasion and offered coconuts to drink out of. Of note, the coconuts were branded with a Tabacalera Palma logo. The younger Blanco explained that the tobacco we were seeing in the field was the second crop on the farm for this growing season, which would be mostly olor for binder. While olor might have been in the ground, other varietals like criollo 98 were in the barns. What was great about this farm was the diversity, not only with the stages the tobaccos were at but also the different styles of barns. One was completely open on the side, another was covered, and one had a small room to produce candela tobacco. Candela refers to a process that produces the green-colored cigars that always get more visible this time of year due to St. Patrick’s Day. Sometimes the cigars end up very green-looking, other times they can be a tan color with a green hint. Whatever the shade, candela is the result of a process, and not a varietal of tobacco such as criollo or habano. In order to create candela tobacco, the tobacco is heated in a specialized barn at much higher temperatures than other tobaccos. In this case, it was a room within a barn that was insulated with cardboard to help seal the sides of the room, with the open flame heaters placed on the ground and an opening at the top at the barn. The idea is to heat the tobacco by incrementally increasing the temperature which removes the moisture from the leaves. Eventually, the moisture is removed and the leaves become dry but are green because the chlorophyll hasn’t been removed, something that happens with the slower process that the vast majority of tobacco used for premium cigars goes through, and which results in the light tan to dark brown colors of those leaves.

Many decades ago, candela was the most common wrapper found on cigars in the U.S., though at this point it’s closer to a novelty than a fad. For tobacco growers and cigar makers, candela has one major advantage: time. The whole process of heating the tobacco takes less than a week and the tobacco requires far less processing once it heads to factories.

I’ve been to more than 50 tobacco fields across the world, but I’ve only gotten to see the process once before, so it was great to see it, even if it was a bit warm.

While the initial walk wasn’t very muddy, midway through our visit to the farm, everyone’s shoes were covered in not just mud, but grass and whatever else our sticky shoes could pick up. It’s worth pointing out that there was more than just tobacco at this farm. First, there’s a house for some of the farmworkers to live in, something that is common but not always the case at a tobacco farm. There are also other plants grown on the farm including corn (for the purpose of protecting the tobacco from insects) and yams (presumably for eating) as well as both roosters and dogs, including a new litter of puppies like the one above.

After a couple of hours at the farm, we boarded the bus to head to Tabacalera Palma, one of two factories owned by Jochy Blanco. When we arrived, it was raining and we were quickly escorted into the factory, something that was a bit of a surprise. Most tours typically do lunch in between the farm and factory portions, but it seems clear the point here was to get the business end of the tour dealt with and then get to the relaxation. Tabacalera Palma is largely the same structure since the last time I was here, though there were some clear changes. It started in the machine-made cigar room, where there appeared to be more machines than before. I think it’s worth pointing out that the fact Tabacalera Palma showed us these machines is a rarity. Most premium cigar companies don’t want to talk about their machine-made cigars, but Tabacalera Palma is a much more open book. The premium cigar operation is just a part of what the Blanco family does with tobacco and its other interests include machine-made cigars, tobacco growing and sales and even as the owner of the property where other cigar companies like PDR Cigars and Cuban Stock have their factories. Jochy Blanco joined us for this portion of the tour and it was cool to see the look of pride on his face. It seemed very clear that it wasn’t about the operation or even the tobacco, rather, his son was leading this tour. José Manuel Blanco is young, just 23-years-old, but beyond that, there was a fascinating contrast between this tour and the previous ones I’ve taken at the factory. Those tours were Tabacalera Palma tours but most of the speaking was done by people who aren’t family, but rather employees and clients. In this case, the younger José Blanco did the tour from start to finish and it was clear his father, Jochy, was happy with the developments that led to this being a reality. We arrived just as one of the lunch periods for the factory workers began, creating this interesting contrast between the tour group walking the factory and workers trying to get to lunch. Tabacalera Palma makes no claims that every cigar it makes is the same. Not only does it openly show off the machine-made operation, but in previous tours, it has made clear that it makes a wide range of cigars, some more expensive than others. The more affordable options aren’t necessarily made the exact same way as the factory’s most expensive cigars and that’s evident in the rolling gallery. Some of Tabacalera Palma’s workers are making cigars fast, about as fast as I’ve seen in any factory.

I think some companies would shy away from saying that they put more effort into some cigars compared to others, but it’s perfectly reasonable. There’s a reason why certain cars cost more than others sold by a company; why certain wines cost less than others from the same vineyard, etc. If nothing else, if one product is going to be considered special, it should at least actually be more special than the others and that certainly should include how the cigar is put together. One other thing that’s apparent at Tabacalera Palma is the quantity of tobacco on hand. It’s not the most amount of tobacco I’ve ever seen at a factory, but it’s a lot of tobacco given the size of the rolling room. The tobacco is stored together but divided by farm and neatly organized and labeled, which is great for guests like me. I noticed a lot of various signage around the factory that seemed to be for tours like this. Few people spent any time touching or smelling the tobacco on this table, but I certainly took advantage of feeling the dozen or so varietals that were on the table. We made it through the factory pretty quickly and eventually were offered a rum cocktail made with Oliver Rum, which comes from a local Dominican producer. You might know their Opthimus brand, as it is available in the U.S. From there it was off to lunch, hosted in a pavilion built on the property. The food was great and it was nice to sit down and relax after the two tours, but our work for the day was hardly done. After lunch was finished we were served three more Oliver Rums as part of an interactive cigar and rum pairing. The pairing was conducted in Spanish, and my Spanish is whatever the Spanish word for “awful” is, but this was a pretty interactive rum pairing event and was a great way to cap off our tour. 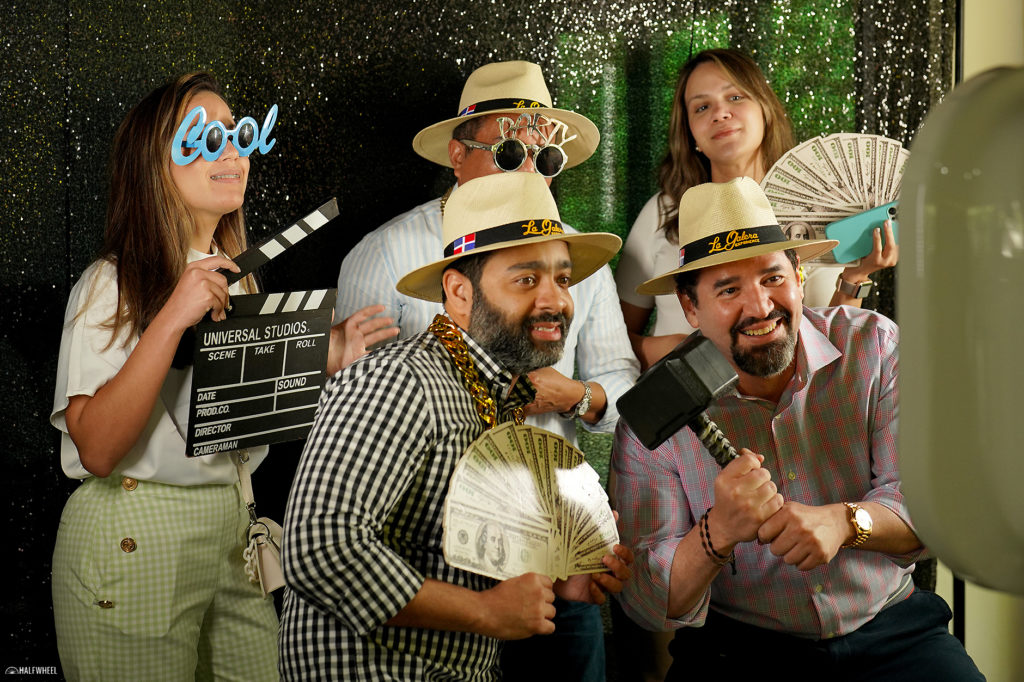 Also in the pavilion was a photo booth, complete with props.

From there it was back to the hotel where there was an optional cigar tasting competition. It seemed like the competition was geared around guessing which cigar came from which factory, however, after 15 minutes of waiting around for the event to start I decided my time was better spent working upstairs in my room and so I didn’t see any of the competition. Christian Hutson of Just for Him told me the winning prize was a free Procigar 2023 registration, which is a pretty nice prize.

Thursday night is the annual White Party, most people’s highlight of Procigar. Everyone is asked to dress in white—yes, I wore a white hoodie—and it’s hosted at the Monumento a los Héroes de la Restauración, Santiago’s most notable building. I’ve been told it’s the only time the monument is closed for a private party, making it one of the most difficult tickets to get for locals in Santiago. As always, the party is well done.

This year’s party was expected to have a special guest in the form of the Dominican Republic’s president, though his plans changed at the last minute and Vice-President Raquel Peña attended instead. Surprisingly, this didn’t seem to make getting into the event any more challenging, but it did have one unintended consequence: the music’s volume was much more tolerable than in previous years.

And oh yeah, Karl Malone danced on stage with his shirt unbuttoned.