Wednesday of Procigar 2020 takes me to Tabacalera La Alianza S.A., the home of Ernesto Perez-Carrillo Jr.’s E.P. Carrillo and the various clients for whom he produces cigars.

Unlike Nicaragua’s Puro Sabor festival—which makes attendees pick one schedule for the whole event—Procigar allows guests to pick events individually for each day. This is definitely the better system. In Nicaragua, people routinely abandon certain tours for others, whereas that practice isn’t very common in the Dominican Republic.

I chose Alianza because I hadn’t been there since 2017 and I was curious to see what had changed in three years, which wasn’t all that clear if I’m being quite honest. From there, the tour was turned over to Emmanuel Diaz Cabrera, the company’s marketing coordinator for international clients. I seem to recall the last tour being led by Perez-Carrillo Jr. but Diaz definitely has the tour down.

Rather than just explain what was happening—the wetting of the hands of tobacco—Diaz had the workers leave the area, the water was shut off and he explained the process himself without the added noise, distractions and mist. It’s a small change but it made understanding the process so much easier. 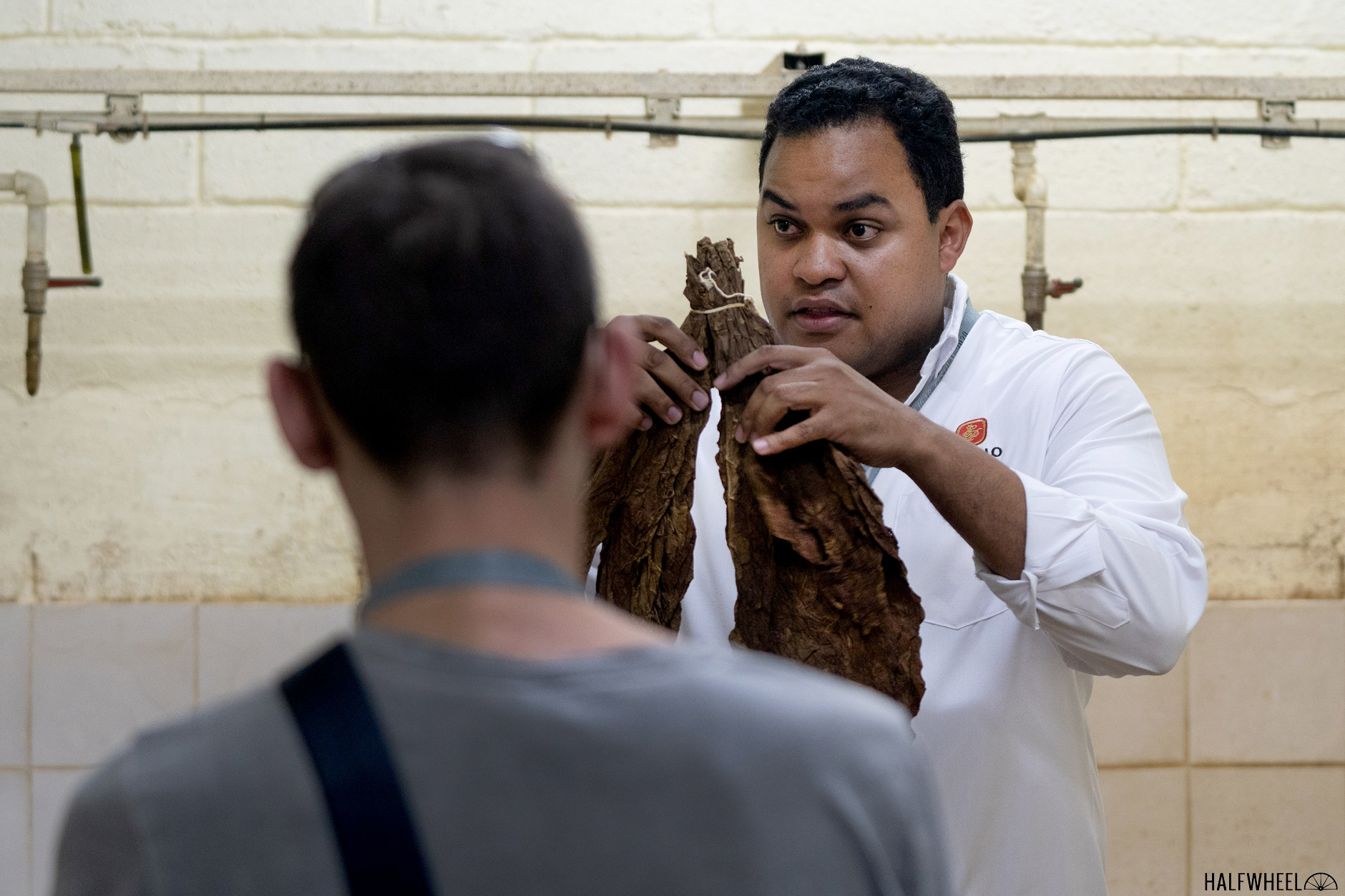 We moved throughout the stages in the factory starting with tobacco storage, where Diaz highlighted the different countries and suppliers the company works with, but also explained that after decades in the business, Perez-Carrillo Jr. likes to finish off all of the processing of tobacco in his own way. This isn’t really different from any other factory; pretty much everyone likes to do the last part of the processing themselves, but it’s one of those small details that most factory visitors probably either aren’t aware of or might overlook. From there it was off to see the pilones, the large piles of leaves where said processing takes place, and then sorting. I’ve been fortunate that the last few factories I’ve visited have all done the tours in the chronological order of the cigarmaking process, but this isn’t always the case. That meant the next part was stripping. Here, Diaz is showing off a worker using a stripping machine, which removes the center vein from the tobacco leaf creating two smaller leaves which will be used for either wrapper or binder. This process is much quicker and results in less damage to the leaves.

More of note, that’s a basketball uniform where one of the sponsors is Palmer’s Cocoa Butter Formula. We then moved to the main rolling floor, an area we’d return to shortly, followed by the aging room and packaging. 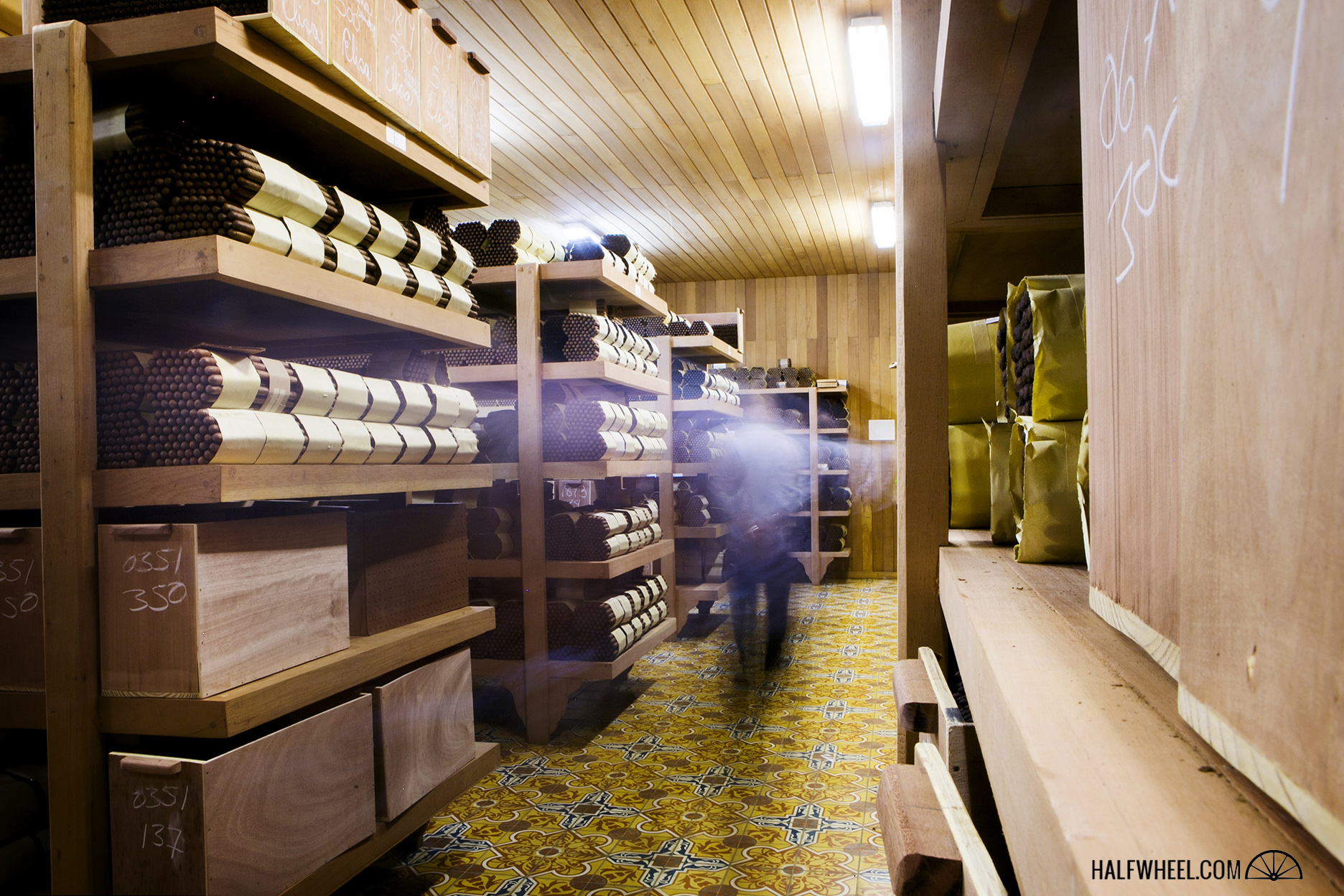 La Alianza has the best floor I’ve ever seen in an aging room, I took the above picture on the tour in 2017, it’s not something I was able to replicate this time around so I figured I’d repost it. That’s Perez-Carrillo Jr. leaving the aging room and its beautiful floor. For those wondering where Perez-Carrillo Jr. was during the tour, he was working in his office, which sits on the second floor with a window looking out onto the rolling floor.

From there it was off to packaging and then the highlight of the tour. We were given little cigars that were each made out of a single type of tobacco, and we smoked each one individually. Perez-Carrillo Jr. explained what he was looking for in each type, both the varietal of tobacco and the role that it would play in the final product.

Perez-Carrillo Jr. might not look like it, but he’s got jokes and a microphone to tell them with.

I’m not sure I’ve ever seen workers at a cigar factory less distracted by guests than La Alianza. The blending seminar was hosted in the back part of the rolling floor and the bunchers, rollers and supervisors could not have seemed to be more focused. Even at factories like Drew Estate—which sees hundreds of visitors per year—the workers are noticeably distracted by guests, that just wasn’t the case here.

He asked us to describe the flavors, burn and more characteristics, and also encouraged questions. We smoked each sample, starting with various filler leaves, and then moved onto an Ecuadorian Connecticut binder and Mexican San Andrés wrapper. At the end of the exercise, we were handed the blend we smoked as components now in its complete form, the E.P. Carrillo Seleccion Oscuro. It was a great insight into the process and the decisions that are made for blending. I particularly liked a seco filler from Nicaragua, something that I wouldn’t have necessarily guessed as a clearcut favorite before the activity started.

I always believe that you are best judged by your peers and there are few people more respected by other cigar makers than Ernesto Perez-Carrillo Jr., and this tour was a great reminder of why that is.

From there it was onto lunch; as a peek into the business of Procigar, the organization gives each factory funds to help cover the costs of the tours. As part of that, some factories host lunch on-premises, others take guests to restaurants. Our lunch was held at Oli’s Room, which I believe I’ve been to before. Confusingly, Google lists this as a sushi restaurant. There was no sushi served, though the appetizers and pasta I had were rather enjoyable. I returned to the hotel and got some work done before heading downstairs to take one picture of the rum and cigar pairing seminar. Attendees were offered Brugal, a Dominican rum, to pair with two cigars: one from SAGA and a La Flor Dominicana La Nox. Unfortunately, the event was only an hour, which meant it was yet another instance at Procigar where people were going to be asked to smoke a La Nox very quickly. Hopefully, this turned out better than the last time, though I don’t know as I quickly left to go get changed for dinner.

Typically, there would have been ample time between the end of the seminar and dinner, but I headed off to a friend’s home and relaxed over cigars, rum and conversation.

I arrived at the dinner quite late but it looked like the typical Procigar Wednesday night dinner. I seem to recall this dinner usually labeled as the Cena Típica, or typical dinner, but this year was—in case the box above isn’t clear—labeled the Welcome Dinner. Still, things were quite similar: buffet dinner, no dress code and a dancing contest. There were some changes, this year’s venue was new and a Dominican couple won the dance contest, something that hasn’t happened in a while.

As has been the case for the past few years, Procigar will store these boxes for guests during dinners, something that makes the night a lot easier as carrying around the box all night isn’t fun, nor is finding out that the box you stashed on your chair ins’t there when you get back from dancing or chatting with other attendees.

I left well before midnight—it’s only 12:21 a.m. now—to get to writing this post and hopefully will be falling asleep for a good seven hours. It will be necessary, as tomorrow is one of my favorite days of the year, but also amongst the most exhausting. I will visit Cigar Family Charitable Foundation, a school funded by the Fuente and Newman families, which is one thing I have tried to do at every Procigar festival. As I’m sure you’ll read about tomorrow, it’s a special place. If you’re not familiar with it, I’d suggest reading this, this and this.