The good news is that I slept through my alarm without waking up Wednesday night, something that was a constant problem due to an air conditioner on Tuesday. The bad news is, I got far less than six hours of sleep, which probably brings my grand total since Sunday to somewhere less than 17 hours.

With the exception of the upcoming trip to the Cigar Family Charitable Foundation, which is east of Santiago, all buses leave from the centrally-located Gran Almirante, which I am currently not staying at. If you type “sleep almirante halfwheel” into Google you all find the first result is a post from last year where I explain that because of this, the people at the Gran Almirante probably get an extra hour of sleep per day due to the decreased transit times. That is false. It’s almost certainly over two hours per day when factoring in both the daily events and dinners, something I desperately could use as I type this post.

But you probably didn’t come here for 170 words about me not sleeping enough, so with that here’s a post about what I actually did on Thursday.

I opted to go to La Aurora, the Dominican Republic’s oldest cigar company, and a factory I haven’t visited since 2015. La Aurora was the first factory I ever visited, but it looks almost completely different from the place I went to in 2011. You should know that when you pull into the free zone—a tax-exempt manufacturing area—where La Aurora is housed, you will see a number of buildings wearing the company’s logo, including the one above. Those are not the cigar factory you will see, rather a mass market operation that produces millions of cigars per week, largely Black & Mild. Guillermo León, La Aurora’s owner, welcomes us to the factory. Not five minutes after we arrived another bus with a non-Procigar tour showed up. La Aurora has built a tourism center within its factory and visitors are showing up daily. Despite not having an actual tobacco field, La Aurora has a tobacco experience room set up to show visitors the various parts of the farming operation. 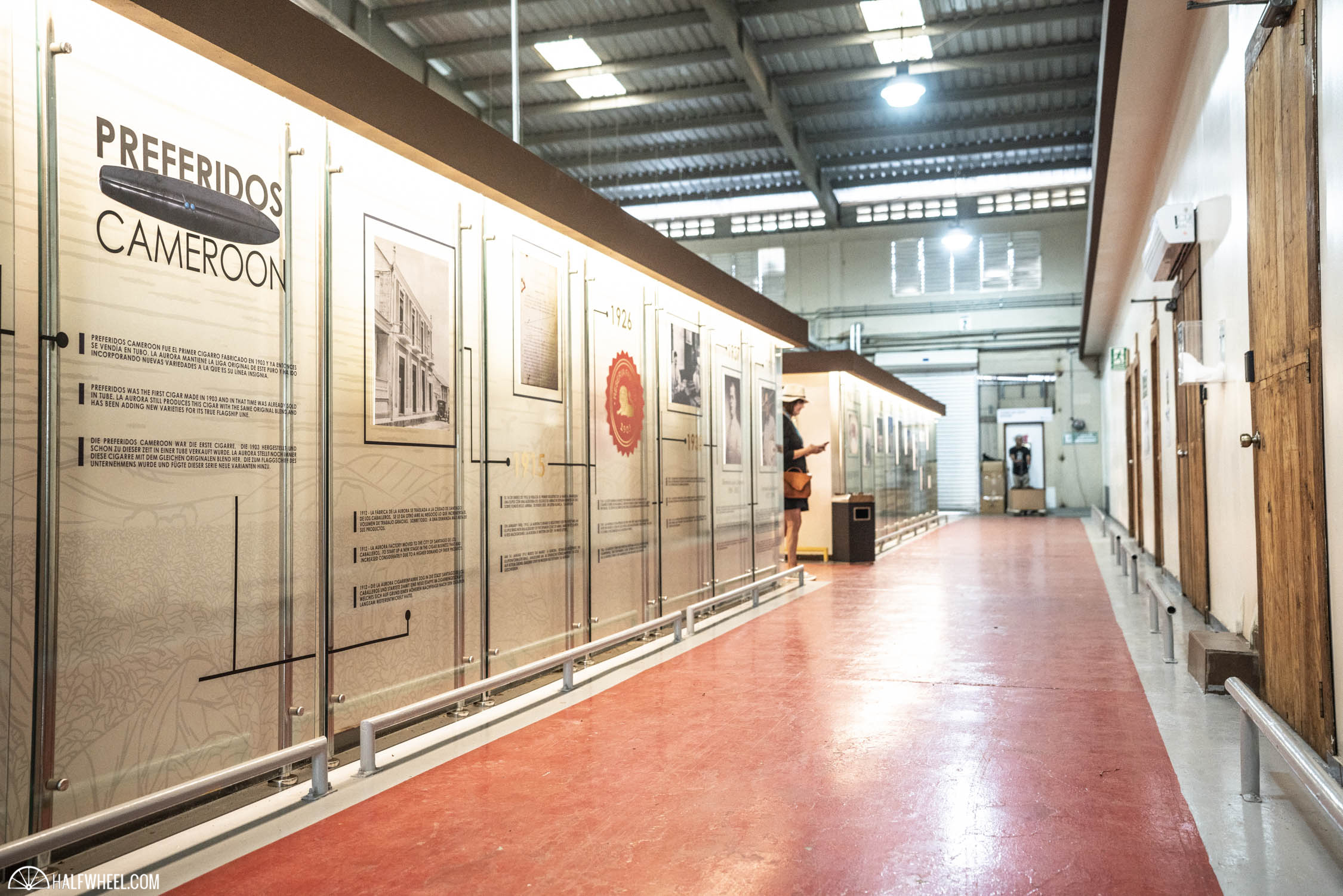 While there’s a massive museum dedicated to La Aurora’s 116 years of being in the cigar business, we didn’t spend much time talking about this.

Instead what you are looking for is the La Aurora Cigar Institute, the tourism operation located within the company’s premium cigar factory. The Cigar Institute opened in 2015 and has visitors every day, people probably much less familiar with cigars than you, visiting the factory and learning about La Aurora and cigars in general. For someone who has never been to a cigar factory, it’s very well done. There are videos, graphics, a legitimate museum, tobacco in various stages (including plants), the cigar-making operation and multi-lingual and energetic tour guides.

Unfortunately for La Aurora, it seems like the tour we were given was probably pretty similar to that one. If our group, people who at the very least were in actual tobacco fields yesterday, had never been to a cigar factory, this would have been great, probably the best place to start learning about cigar making in the world. But that wasn’t the case and as such there was a ton of repetition when there could have been a lot more time talking about La Aurora’s extensive history, which was barely talked about on our tour. La Aurora has always had a very defined ethos and culture for its factory, that apparently includes these signs encoring workers to smile. While the tour might have not been my favorite, La Aurora’s graphics and information throughout the factory are superb. This sign in the rolling room explaining what people are rolling is extremely helpful to anyone walking into the rolling room. La Aurora is the only factory where I’ve seen a lector who reads the news to those on the factory floor. The Procigar group picture and the people that make it.

Everyday other day of the year, this is the right way to give a tour, but I don’t think this is the right way to give a tour to Procigar attendees. La Aurora certainly pulled out some special stops for the tour, but the education could have been much more useful and an hour into it our group was getting noticeably disinterested in topics like how told hold a cigar. For those wondering, one thing that wasn’t part of our tour was the flavored cigar operation, which is fairly unique in the Dominican Republic. That being said very few companies want to show off their flavored cigar operations and it doesn’t really fit with the vibe of Procigar or what La Aurora is aiming for. The rum seminar was fantastic. While I’ve had a lot of practice, I’ve admittedly not had that many moments where someone has taught me how to properly consume alcohol. Karl Malone (L) & Guillermo León (R) took questions from the group about a number of topics, capped off by a great question about their most memorable cigar moments.

The good news is once the tour was done, the visit got very good. After a remarkably impressive lunch, including properly medium-rare beef, the crown jewel of the La Aurora visit took place. First, it started with a tasting of the La Aurora 110 Aniversario rum, which was created five years ago to celebrate the company’s 110th anniversary. It’s being distilled by Ron Barceló, one of the country’s most famous rum operations. During the seminar, it was paired with the La Aurora 115th Aniversario, an upcoming series of cigars to celebrate last year’s special milestone for the company.

For those that haven’t had it, the rum will be sold in the U.S. through a distribution agreement with Karl Malone, yes, that Karl Malone. I met Malone a few years ago at Procigar, before he had started in the cigar business and now he’s fully involved at just about every level. In addition to distributing La Aurora’s rum, Malone has a cigar line—Barrel-Aged by Karl Malone—made by La Aurora and now distributed by Miami Cigar & Co. Furthermore, he also operates a cigar store in his native Louisiana.

He’s also a bonafide cigar smoker, quite possibly an all out cigar nut.

There have been a lot of athletes who have had their names on cigars, but it seems clear this is different. Malone seems to care more than just having his name on a cigar and if you ever have the opportunity to smoke a cigar in the same room that will likely come across in a matter of moments.

Malone and Guillermo León spoke about the project and took questions from the audience, though—as is always the case at Procigar—we eventually were cut off so we could head back to the Almirante for the afternoon activities.

I had a quick meeting and then checked in on the Cigar Smoking World Championship Qualifier. Now in its 10th year, the CSWC has gotten to be quite popular. It’s a very detailed slow smoking competition that hosts qualifiers around the world and a championship in the fall in Split, Croatia. Like last year, there was a qualifier held during Procigar, where the winner won a watch as well as an all-expenses paid trip to the finale in Split. The person formerly in first place of the CSWC qualifier (L); a contestant who is still in the contest (center); Marko Bilic (R), the CSWC founder; behind them, a timer showing how much time had elapsed since lighting up their Macanudos.

The rules for this activity, basically smoke a cigar the longest without it going out or the ash falling, are downright intimidating. However, the prizes for winning the qualifier are extremely generous and I’ve only heard great things about the event in Split.

Those rules also mean that the air conditioning, which could disadvantage those sitting underneath it, is also turned off and the room becomes rather hot and smoky pretty quickly. So I took a few pictures and left, albeit due to a message I got about a court filing in the FDA lawsuit.

After an overpriced cab ride back to my hotel, I opened my computer to read about said court filing, wrote that story, uploaded the pictures you see in this post and then got myself ready of the annual white party.

We’ve covered the white party before. Procigar hosts a party at Santiago’s most iconic place: the Monumento a los Héroes de la Restauración which overlooks the entire city. It’s the only time of the year a party like this is held at the public face of the city and as such, tickets are a hot commodity. I suspect the white party is the reason why there are physical tickets this year instead of wristbands—to prevent people from sneaking in—and I’ve heard that many of the people in the cigar industry are flooded with requests from friends and family for the event, which draws its name from the white attire that virtually every single person wears to the party.

It’s a fun time and it seemed like it was a bit easier to walk around this year, though I also didn’t explore one whole half of the venue. Earlier in the day I was asked for a suggestion about the dinners and my first thought was to move the white party to Wednesday, the gala to Thursday and make Friday much more casual. I suspect that probably won’t happen, but a man can dream, just not at this moment because I have to format this post.

Tomorrow’s post will be a bit different as I’ll cover the day events of Friday—a visit to tobacco fields with Quesada—and then leave the gala dinner recap for the following day.