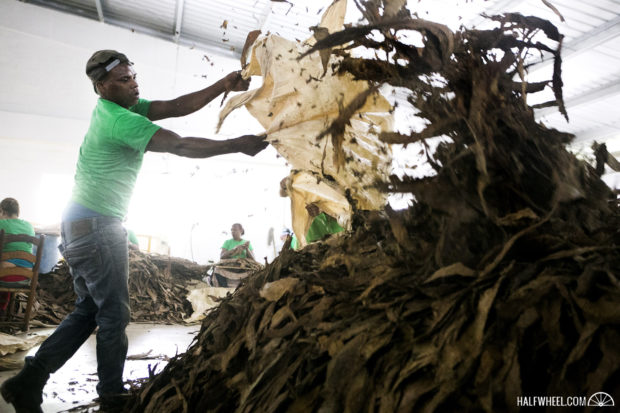 There are many constants of Procigar, not getting enough sleep is amongst them.

After writing a quick story about some positive FDA news, I headed outside to the bus scrum. I’d love to take a drone here one day and show how the bus boarding process works, it’s truly quite fascinating. The morning gathering outside of the Gran Almirante includes a mixture of cigar manufacturers and guests who hang out catching up—and then in a few short minutes, people find their way to busses and head to their respective tours.

For me, that meant Tabacalera Palma, one of the few established factories I’ve never been to. Patrick Lagreid visited and wrote about the factory during Procigar 2015, so I’ll try to focus on the changes since then as there are many. 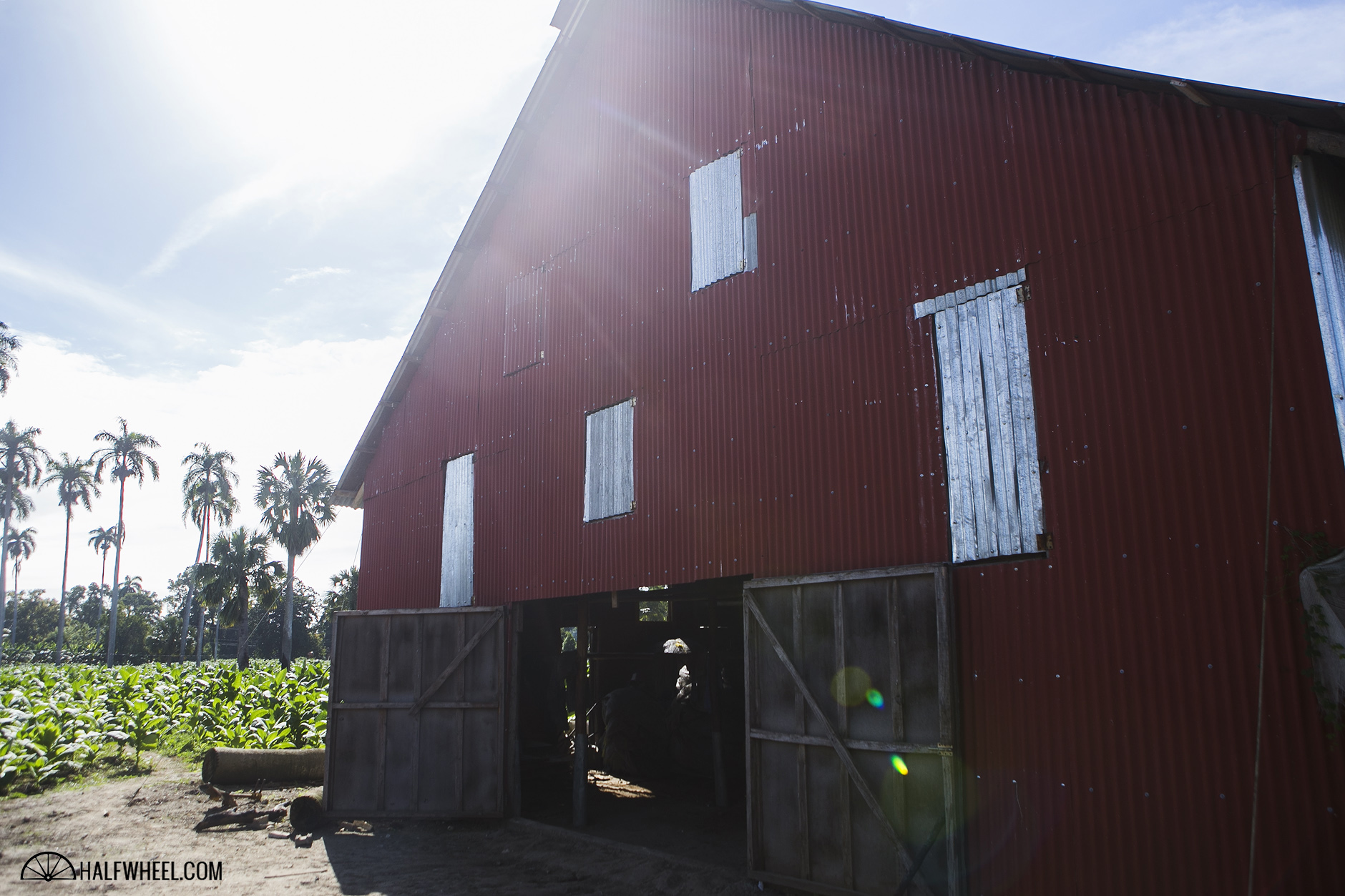 Like Patrick’s tour, we started in the Jacagua farm just outside Santiago. It’s a 45-acre lot that was actually Jose “Jochy” Blanco’s father’s farm. Jochy Blanco—as he is almost always referred to—is not the José Blanco behind Señorial, although they are cousins and Jochy makes the cigars at Tabacalera Palma.

The farm grows a variety of varietals, including a Connecticut wrapper in one plot of the field. Apparently the pH levels in that part are unique and ideal for the Connecticut-seed, though the tobacco doesn’t like being produced elsewhere. Alexander Berezowski of Tabacalera Palma talked about how some areas of the field weren’t planted this year because of late and heavy rains, though most of the land had tobacco. 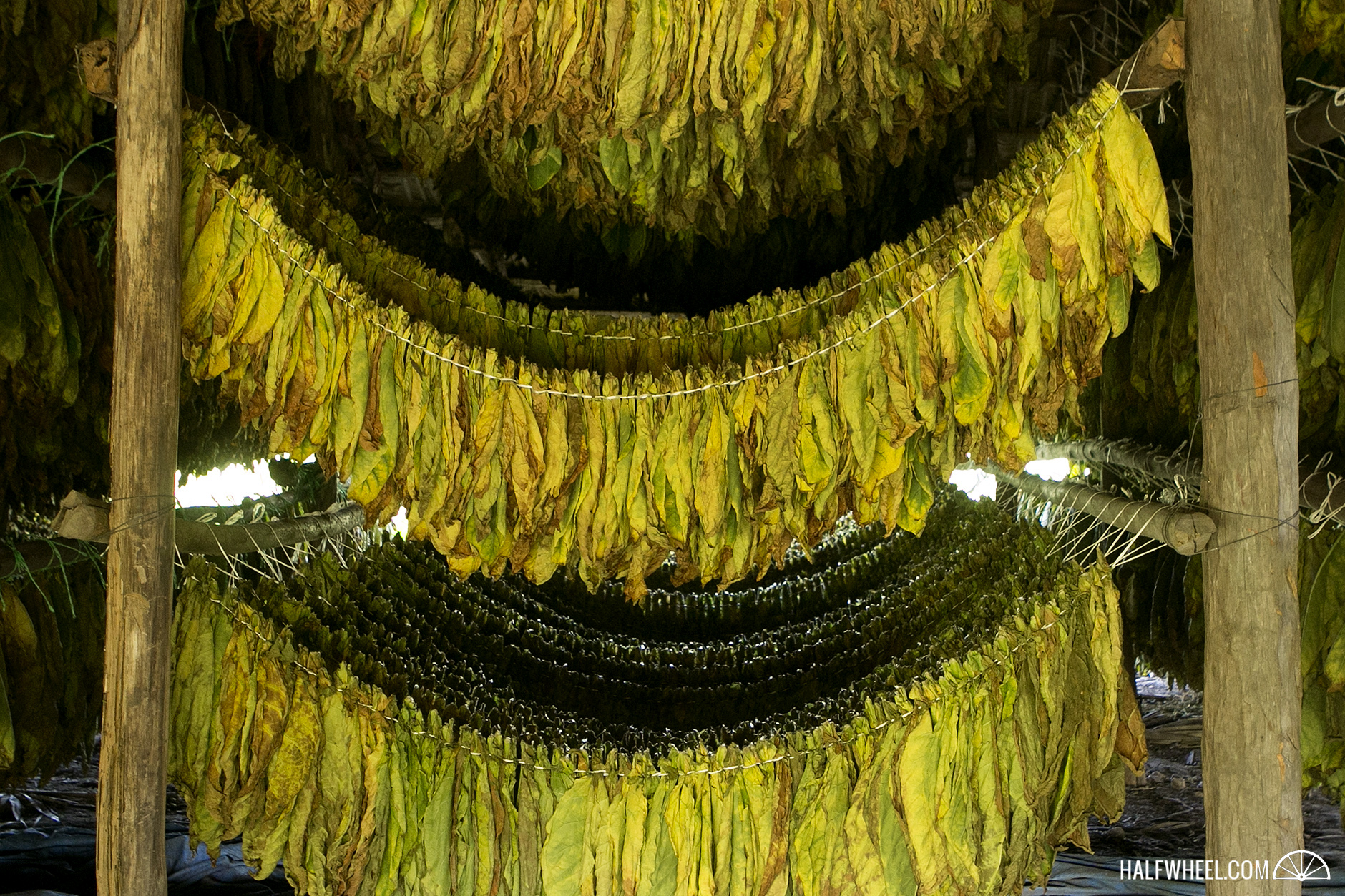 Like in Nicaragua, the tobacco was a bit earlier in the stage than it typically is this year. One area had gone through second primings, but some were just going into the ground. It’s worth pointing out that many farmers have staggered their crops, particularly in the Dominican, though the rain seemed to force everyone back.

Also of note, Berezowski specifically mentioned having to deal with the challenges of global warming, something we heard about last year and I’ve argued we are likely to hear more about this year. 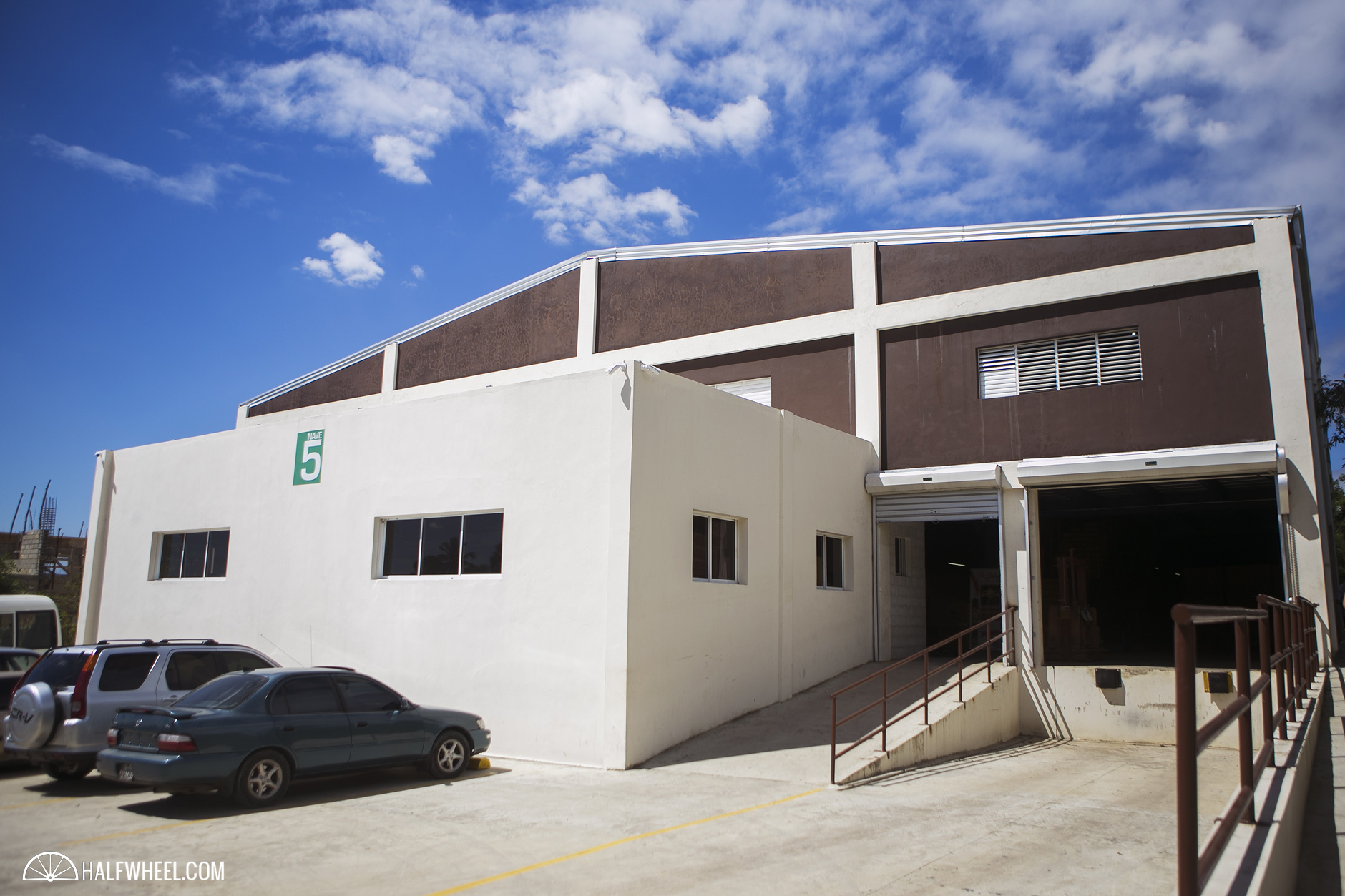 From there it was off to Tabacalera Palma, which almost looks unrecognizable compared to the pictures Patrick took two years ago. It’s located in a free trade zone that Blanco owns which also includes the PDR Cigars factory. We started not in the main building, but a tobacco storage facility across the street. 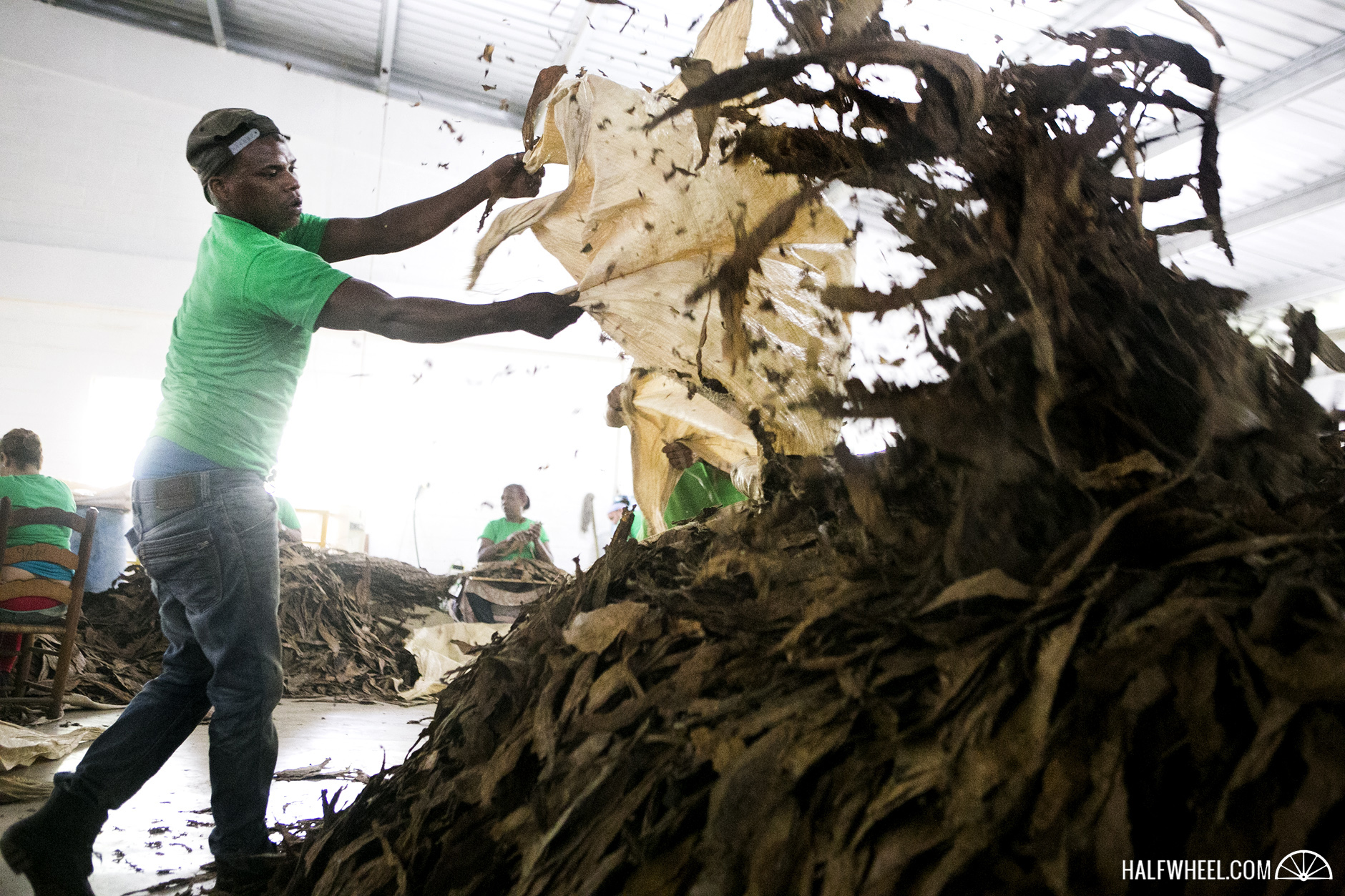 It houses filler and around 100 employees. There’s actually another tobacco storage facility being built and another facility in Villa Gonzalez.

I’m not entirely sure why, but the Dominican Republic has a lot more facilities with multi-levels, particularly in comparison with Nicaragua. Both the tobacco storage facility and the main building are two-story. 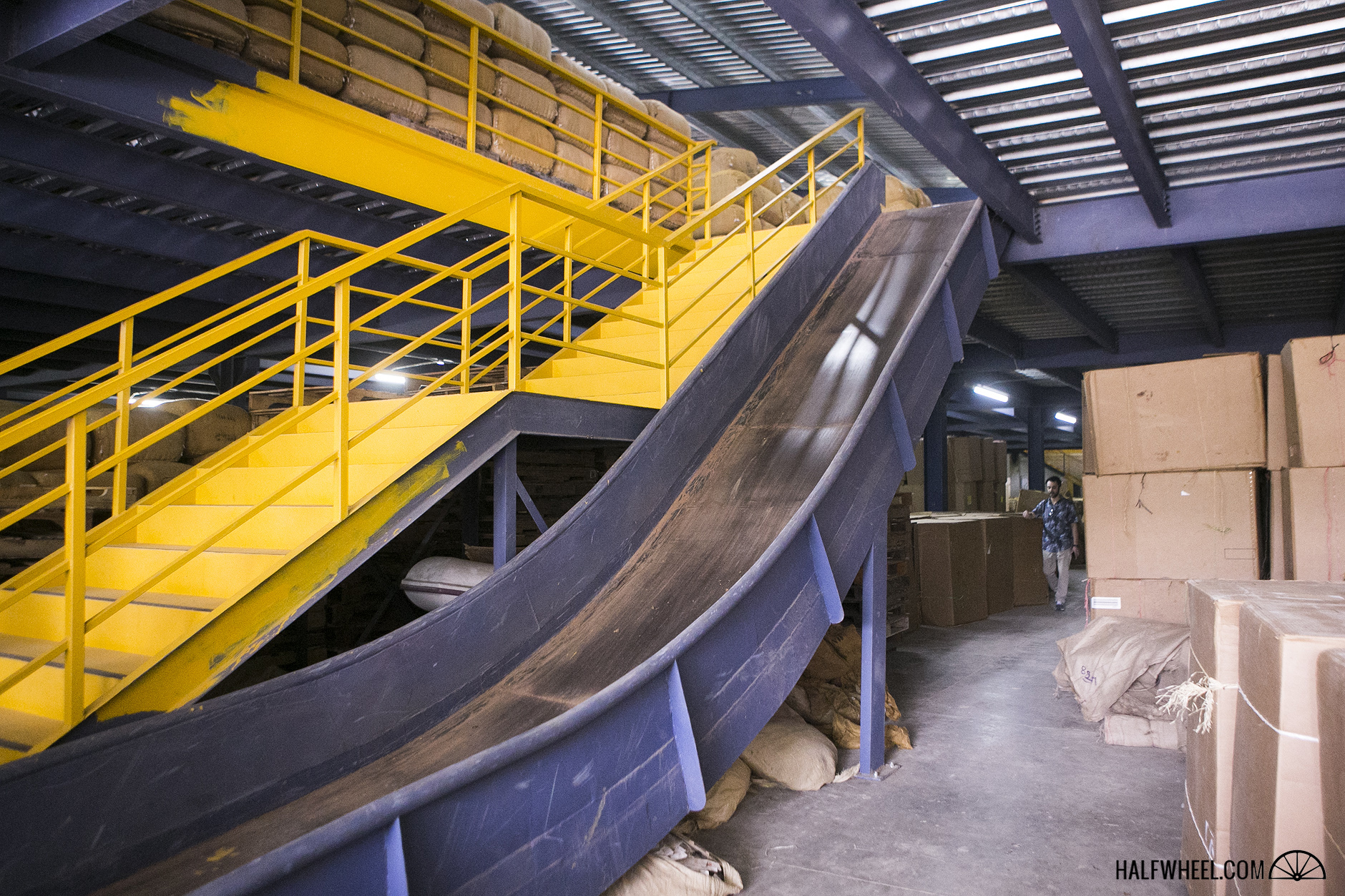 No, I didn’t go down the tobacco slide. 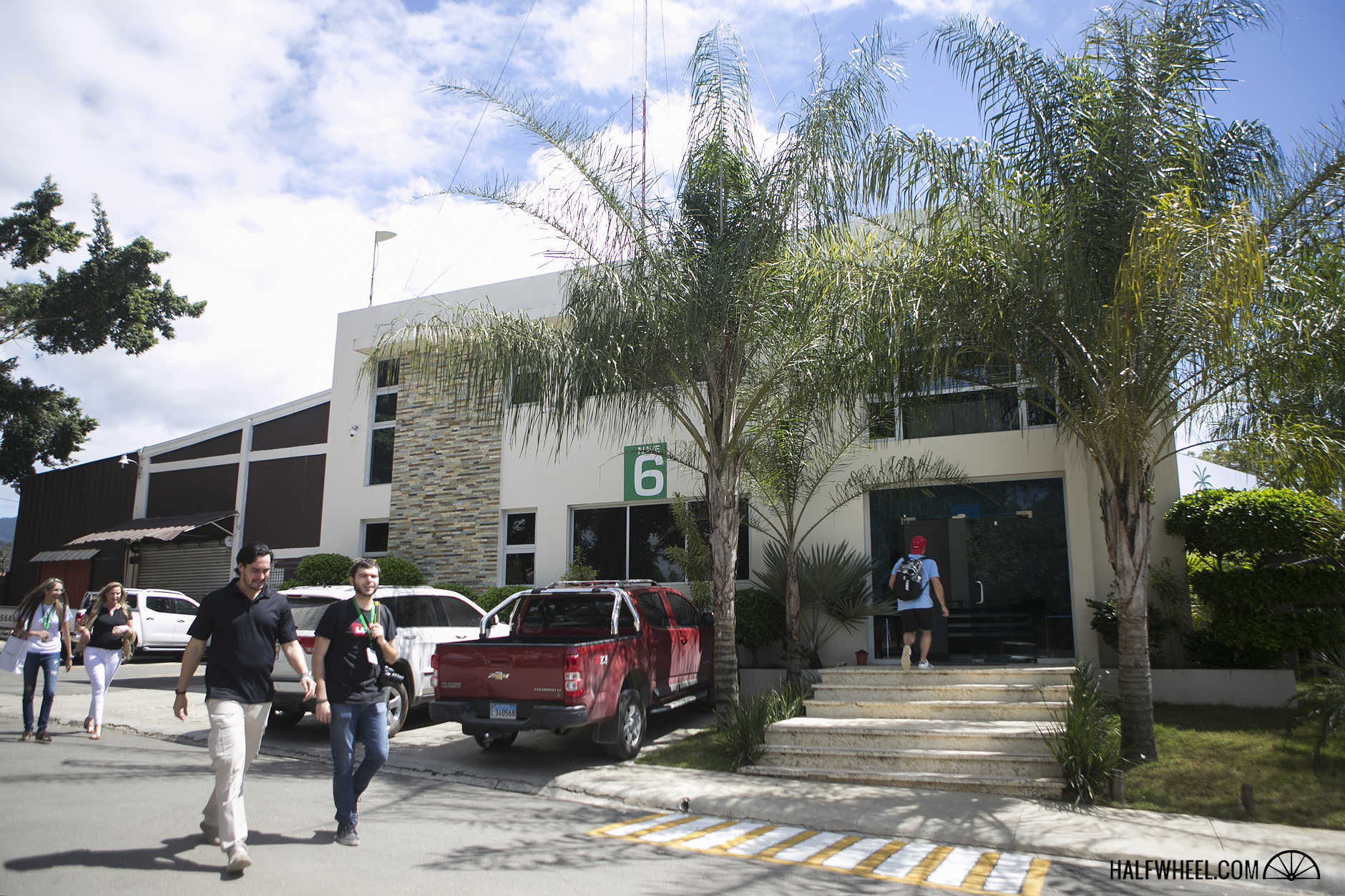 While the changes in the last two years are dramatic, there’s a lot more changes going on inside. Some rooms have just been reassigned, others are about to be transitioned next week and there’s certainly other plans for the factory. This has to do with production, which is expected to surpass 7 million cigars this year. Previously the factory’s highest output was 5.25 million cigars according to Berezowski. 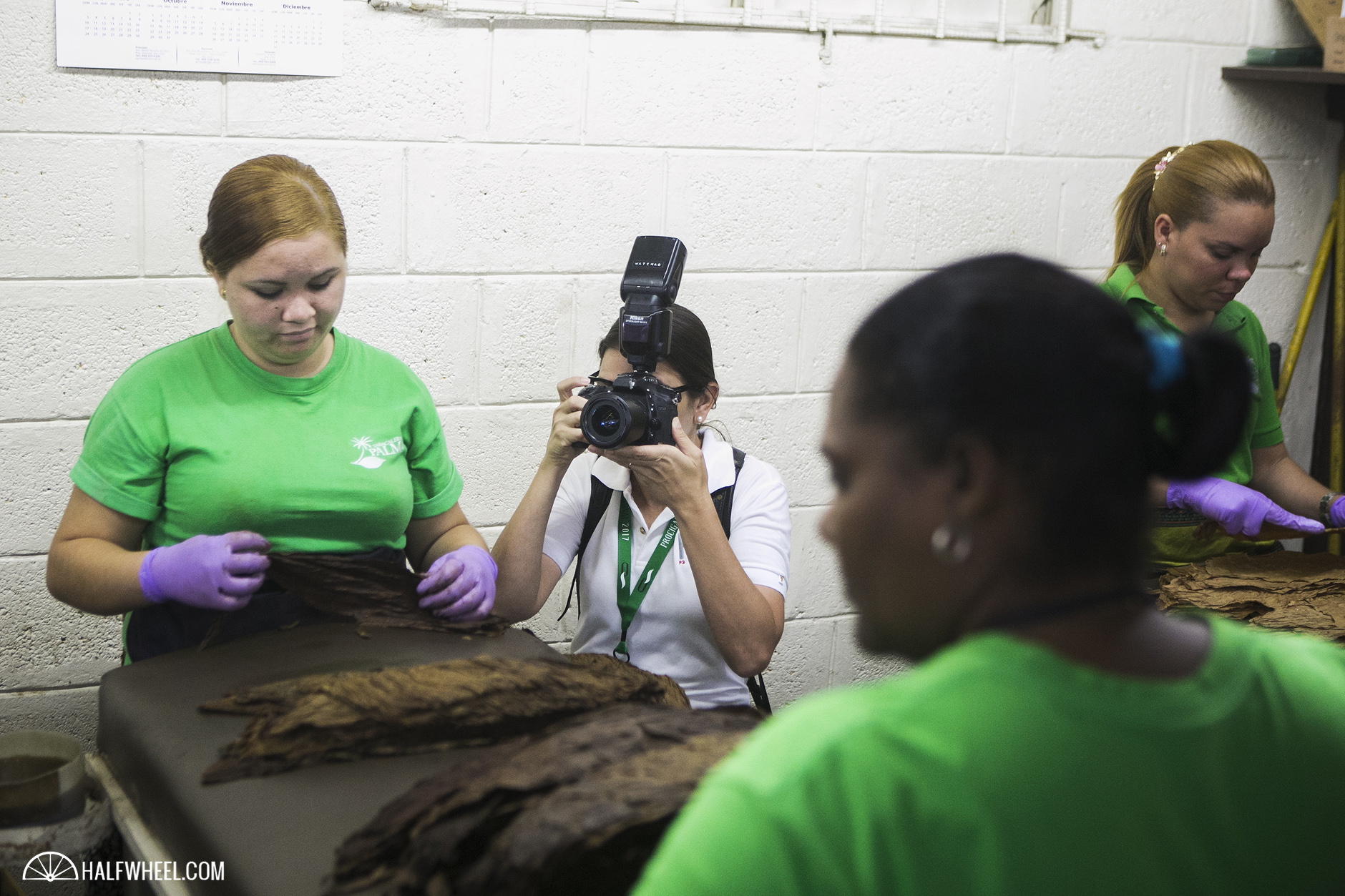 One thing that stood out to me was how upfront the team at Tabacalera Palma was. They acknowledged they use a lot more traditional methods: no thermometers in the pilones, no draw machines testing cigars—certainly a reflection of Jochy Blanco. They also were upfront about some of the less glamorous parts of the factory. Certain lines are lower priced and as such they are rolled and packaged as quickly as possible, others—particularly in packaging—are done at a much slower pace. 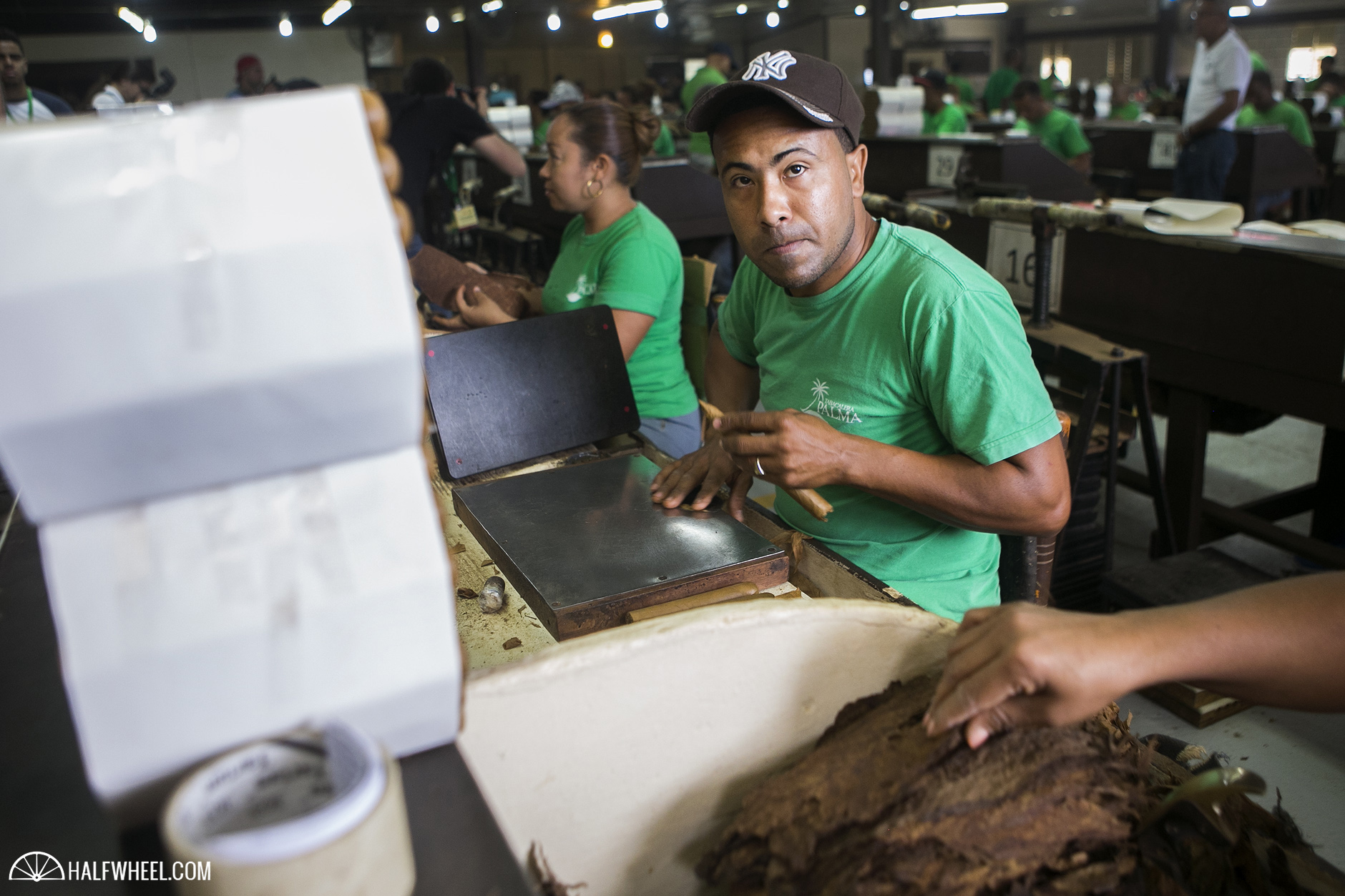 Rollers are allowed to smoke as many cigars as they like during the day and are able to bring home up to three per day, twice per week—a nice perk of the job. 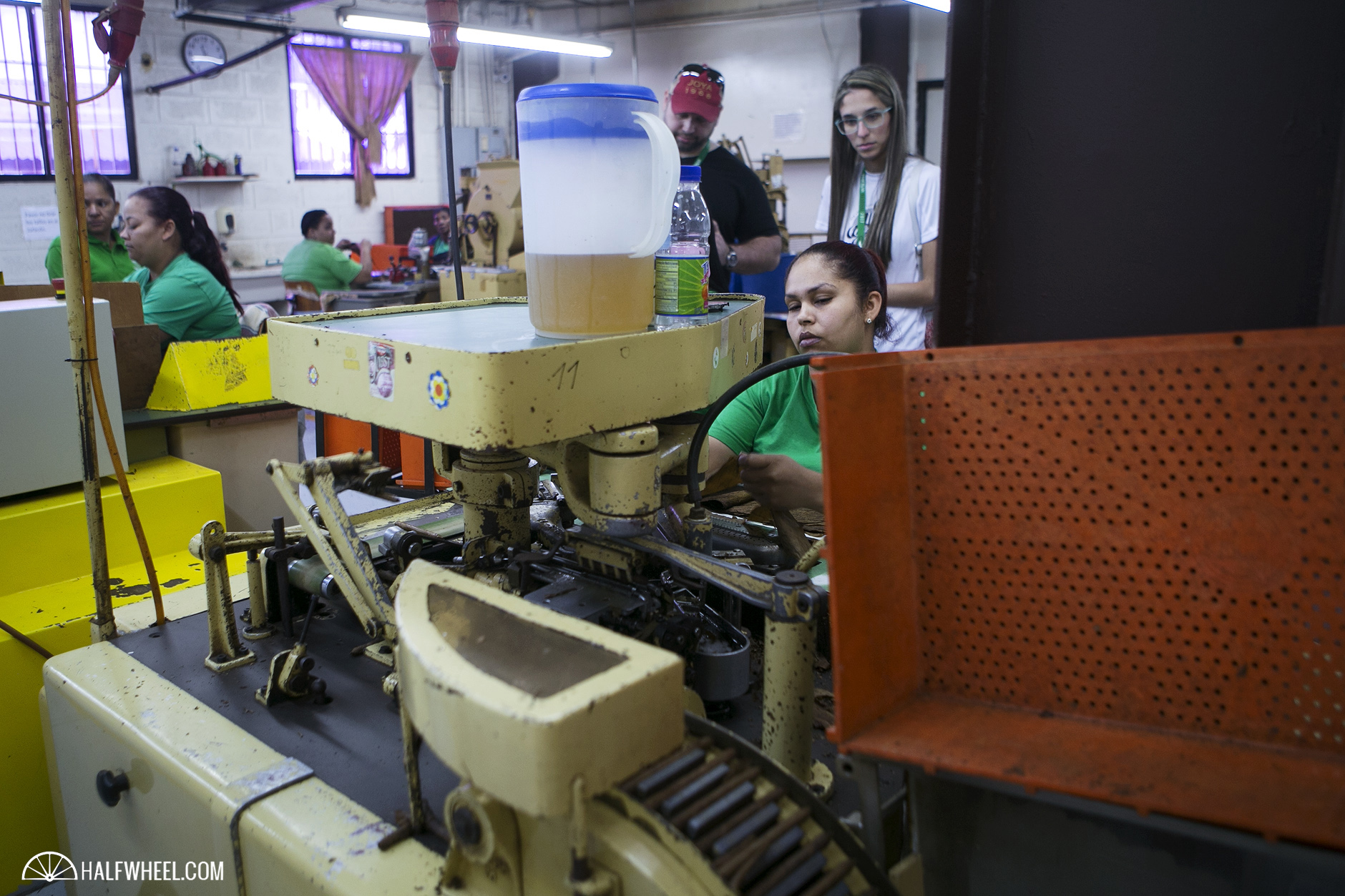 Tabacalera Palma also has nine machines that use the scrap tobacco—as well as any cigars that don’t pass quality control—for filler and a natural wrapper. It’s a not so subtle reminder that you never waste tobacco, and those machine made cigars, some of which are larger than a cigarillo—help to keep the cost of the Aging Rooms, Matildes and La Galeras down. 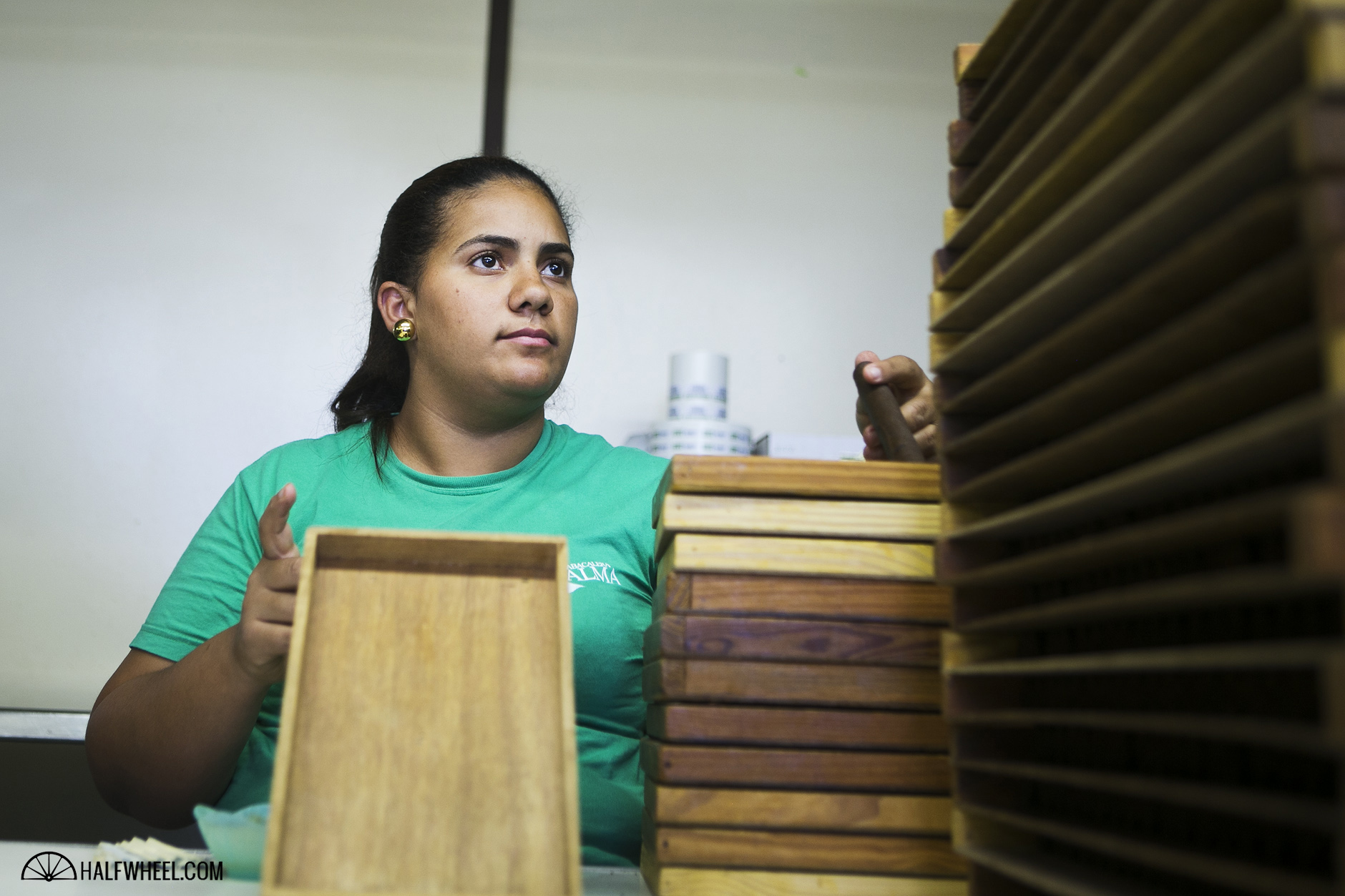 After the tour, we headed to lunch behind the tobacco warehouse, which was local barbecue. One thing I really like about Procigar compared to Puro Sabor, the Nicaraguan festival, is that lunches are hosted by the factories you are visiting and not one big lunch. This makes for a much more intimate lunch and cuts down on unnecessary travel time.

Afterwards, we headed back to the Almirante where at least four people took merengue lessons before the annual press conference was hosted—an event I skipped, unfortunately.

“I’ve never seen so much rain, so constantly every single day for four months,” said Manuel “Manolo” Quesada Jr.  “That sort of put a damper on it, staggering the crop was the answer and I forecast a wonderful crop when we start bringing it in.”

Quesada was referring to the aforementioned massive rains, which affected everyone in the country. 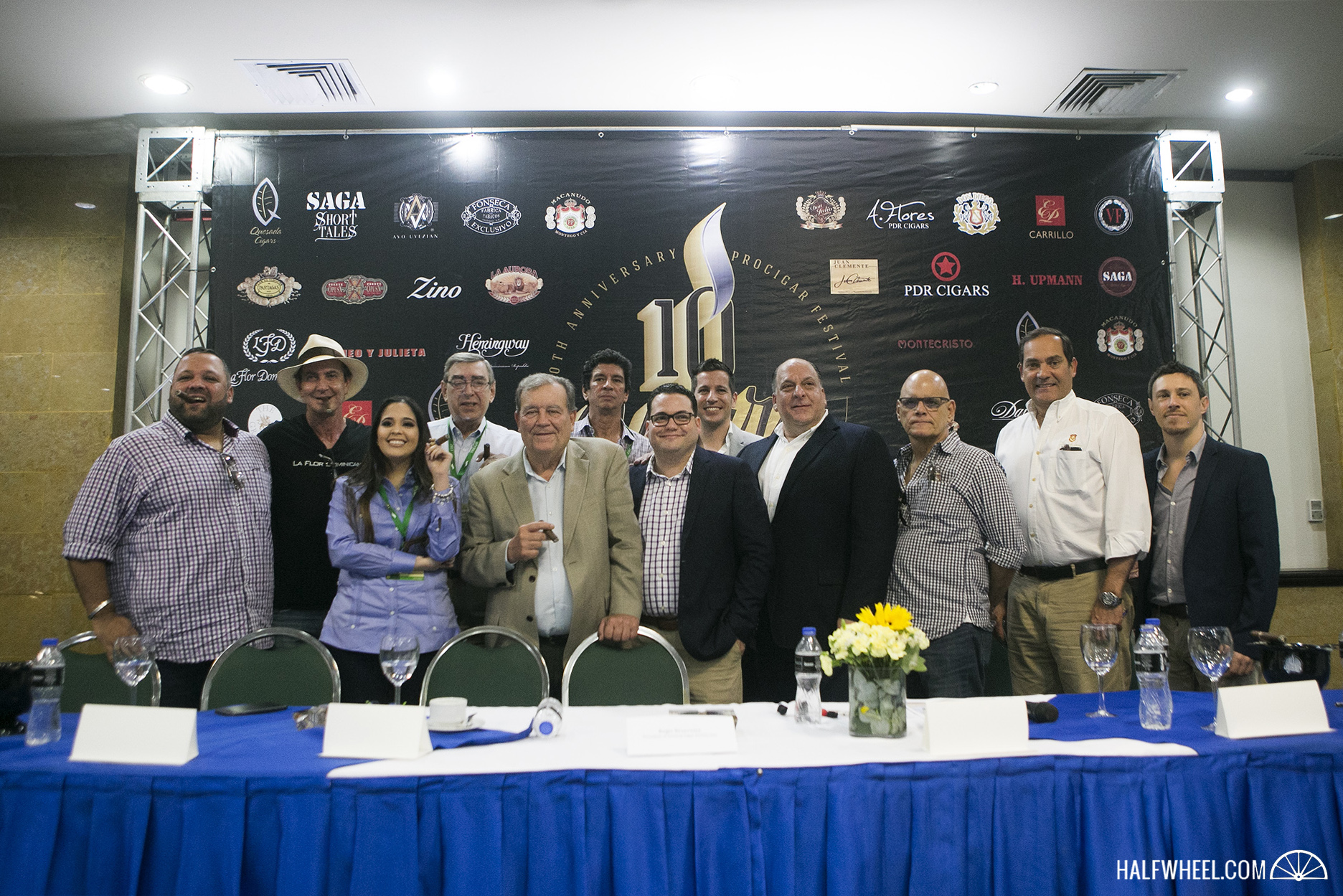 Per the organization, global sales were flat. Europe was down 5 percent and Asia—particularly Malaysia and Singapore—were up. Much time was dedicated to how the organization and its members are handling regulations by the U.S. Food & Drug Administration (FDA). I’m not sure there was anything new learned today, but it’s obviously a large part of the organizations focus.

After that we headed to our rooms and eventually the first dinner, the traditional Dominican dinner. It was once again hosted at Gran Teatro Del Cibao, though unlike last year, there was no performance and awards show. As much as I enjoyed those two events last year, I was happy to begin eating around 8 p.m. as opposed to 9:45 like the year before.

And that was with good reason. At 9:30, a special three-song set was performed by members of Procigar including: Jochy Blanco, Abe Flores, Litto Gomez, Tony Gomez, Hendrik “Henke” Kelner, Klaas-Pieter Kelner, Raquel Quesada and Nirka Reyes.

There are some, unconfirmed, reports that I may have been forced to participate in the annual merengue dance contest.

I would like to respond with the following statement:

I did not win.