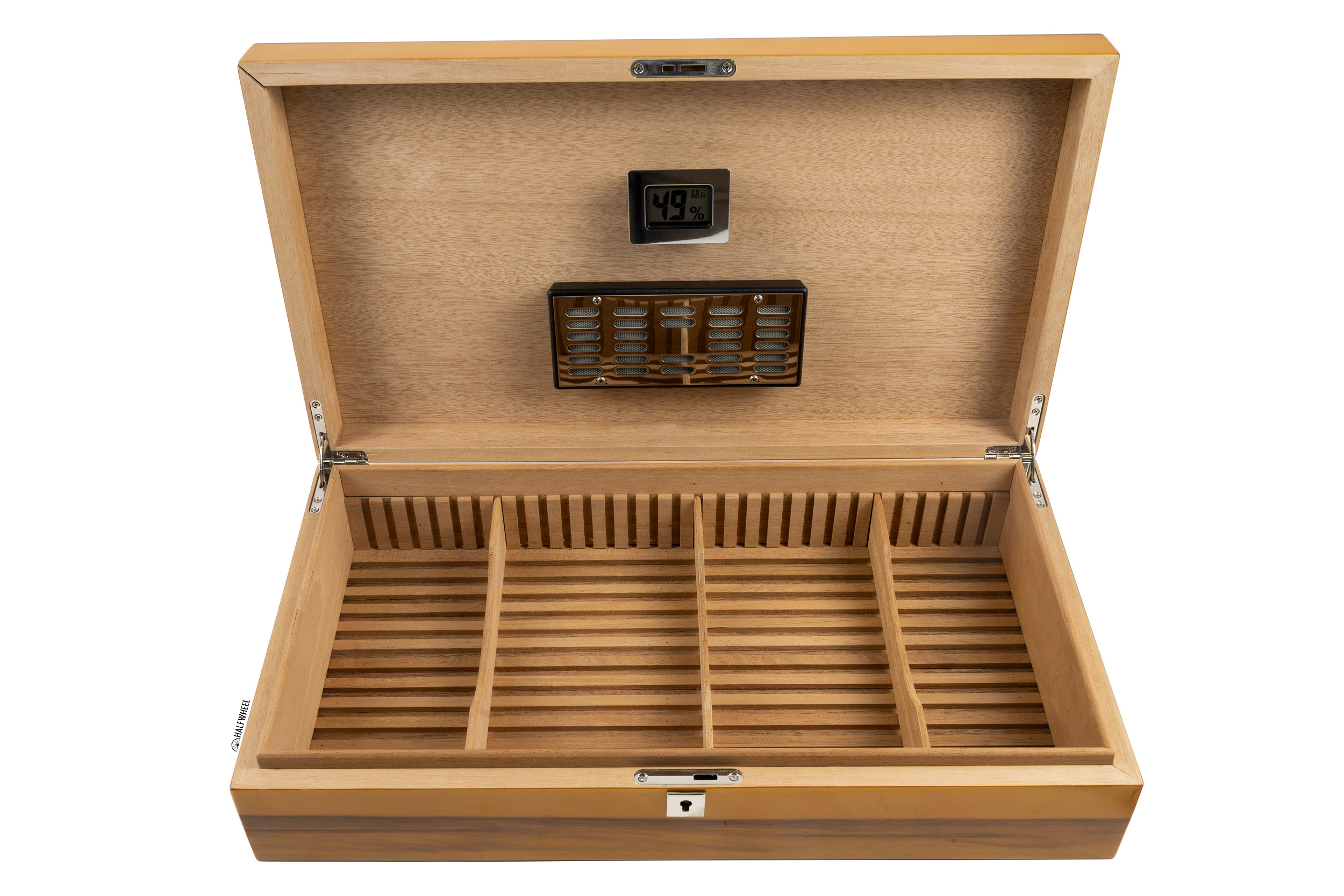 The Prestige Winchester is the third humidor reviewed as part of a seven-part series that is attempting to find the best traditional humidor under $175.

This is also the second humidor from Prestige Imports Group, one of two companies that is responsible for many of the humidors on sale at cigar shops, catalog retailers and even places like Amazon. Prestige—along with Quality Importers Trading Co.—offers everything from travel humidors to large cabinet humidors at prices that are sometimes difficult to believe.

I mentioned during my review of the other Prestige humidor in this series—the Prestige Princeton—I opted to select two humidors from Prestige: one that was a safe choice and one that was a bit more ambitious. This humidor is the latter choice. It’s a very wide humidor that is a much different shape than the rest of the humidors in this series, and quite frankly, unlike most humidors sold today. The outside measures 18.5 inches x 10.3125 x 4. It’s rectangular and shows a high gloss wood pattern with the only exterior disruption being a square keyhole in the middle of its front-facing side.

The inside of the humidor is where things get really interesting. The Winchester comes with three removable dividers, though unlike most humidor dividers, these are slotted dividers. Most humidor dividers have foam pieces on both ends and just squish into place. These have no foam and instead, the humidor features 29 slots on front and back parts of the interior that allow users to adjust the spacing inside. That feature, combined with the slotted floor design make for one of the more interesting-looking interiors you’ll see on any humidor.

For those wondering, the slots between the dividers are .3125 inches apart. As for the florists’ foam humidifier, here are some thoughts:

The unique dividers make the interior dimensions a bit more challenging to determine. I think it’s best to look at this humidor as 17 inches x 8.5 x 2.75 on the inside, which works out to 397.375 cubic inches. That being said, the top inch of the bottom shelf doesn’t have the slotted design, and as such, you can get a bit more space—.25 inches—without the slots. I suspect the more accurate volume is actually 401.625 cubic inches.

Humidor Discount’s humidor calculator says this should be able to hold 66 robustos if the space is maximized. Since there’s only going to be two charts for this review, here’s one of them. The seasoning process didn’t show any abnormalities. Despite my thoughts on florists’ foam humidifiers, the data here suggest that it mostly worked. I think some of this is due to the fact the humidor probably wasn’t fully seasoned, but whatever the case, this is a win for the Prestige Winchester.

The Boveda packs came out of the humidor weighing 136 grams, which suggests that this humidor didn’t have any major flaws in terms of keeping the humidity in, though that’s not an exact science.

Given how this testing process works, there’s not really enough time for me to restart it. That being said, given how this humidor performed up until this point—both testing and otherwise—I don’t think it changes the recommendation and as such, I opted to move forward without the data.

While I put the Winchester in the dry cabinet, I have no data to speak about. This is the third humidor of the seven humidor test and so far, all three have had issues.

While I think there’s a decent chance that the Prestige Winchester we are testing works, it’s also falling apart. The bigger issue with the recommendation is the part about quality control. If a humidor that looks like this is capable of making it onto a store’s shelf, what else could go wrong. This humidor showed up in such poor condition I’d prefer to never speak of the Winchester again, which is a shame, because otherwise there are some interesting features.