March 7, 2013 — General Cigar announces that Punch® Rare Corojo is making its anticipated annual return to retail, this time with a new, strikingly-packaged figurado that is only available as part of the Honduran brand’s 2013 release.

A total of eight Punch Rare Corojo frontmarks are now available, with suggested retail prices ranging from $4.79 to $7.39 per cigar. This includes the new “Perfecto” size (7” x 48, SRP per cigar $7.39), which is protected in a keepsake, wooden cabinet-style box. 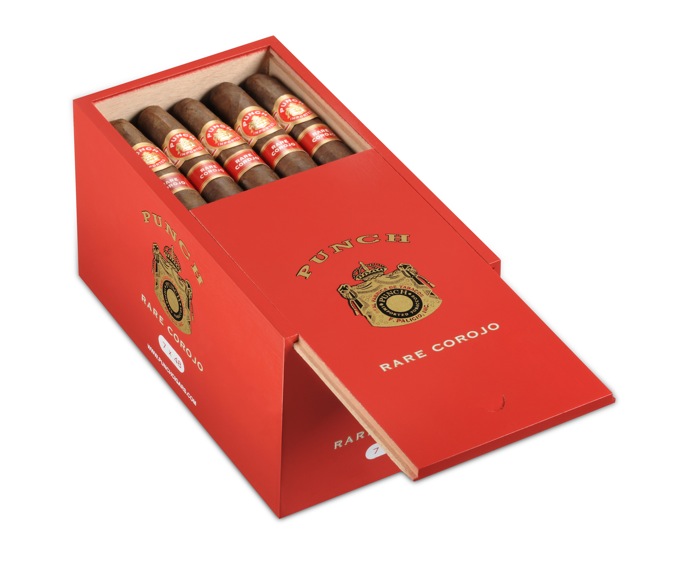 Punch Rare Corojo cigars will be sold by General Cigar to retailers nationwide until May 31, 2013. The 2013 Rare Corojo release will therefore be available in cigar shops until the limited quantity is depleted.

Gus Martinez, director of marketing for General Cigar’s Punch cigar brand noted, “Punch Rare Corojo started the trend toward seasonal offerings, and we are pleased to continue the tradition. Between the breadth of frontmarks and the addition of the Perfecto to this year’s lineup, we are confident that Rare Corojo will be the go-to, springtime smoke for cigar lovers across the country.”

Like the recent issues of Punch Rare Corojo, the 2013 release is crafted with a lustrous, extra rich, Sumatra wrapper cultivated in the mountains of Ecuador. Grown only in limited quantity, these rare, reddish leaves give Punch Rare Corojo its uniquely smooth taste. Bound with Connecticut Broadleaf, Punch Rare Corojo cigars are filled with a select blend of Dominican, Honduran and Nicaraguan tobacco, for a complex smoking experience, layered with spice.