In order to achieve a perfect balance, the Perdomo 20th Anniversary blend requires wrappers that have been carefully hand-selected and well-aged for over 6 years. After being fermented to perfection, each Cuban-seed Sun Grown and Maduro wrapper is barrel-aged in bourbon barrels for an additional 14 months. These barrel-aged wrappers are at their peak color and flavor, making each Perdomo 20th Anniversary cigar impeccably smooth from beginning to end.

“Our family has been truly blessed over the years with a loyal and dedicated staff both in Nicaragua and the United States. We are extremely grateful to the retailers and consumers who have supported us through the years and continue to share our enthusiasm and passion for our premium hand-made cigars. I’m extremely proud of this brand and we are very excited to share these special cigars with everyone,” states Nick Perdomo, Jr.

Created using the Perdomo family’s time-honored Cuban traditions, the new Perdomo 20th Anniversary is semi boxpressed and presented in elegant 24-count Spanish cedar boxes. The Perdomo 20th Anniversary is available in both Cuban-seed Sun Grown and Maduro wrappers in five stunning sizes: Robusto R556 (5 x 56) MSRP $8.00; Epicure E556 (6 x 56) MSRP $8.50; Torpedo T6554 (6 1/2 x 54) MSRP $9.00, Gordo G660 (6 x 60) MSRP $9.50, and Churchill C756 (7 x 56) MSRP $10.00 per cigar (excluding state and local taxes). “We will completely absorb the SCHIP tax on our Perdomo 20th Anniversary brand as we do on all of our other brands,” states Nick Perdomo, Jr. “We are committed to providing the very best cigars at great price points for both retailers and consumers as we continue to experience tough economic times.” 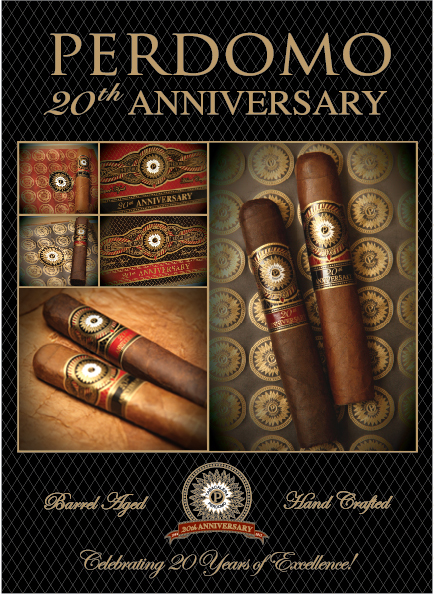