February 5, 2014 (Miami, Fla.)–Jose A. Seijas has announced the launch of his new brand Matilde. Formerly the Master Blender for Tabacelra de Garcia he was responsible for the manufacturing of up to 55 million cigars a year and blending world renowned brands like Montecristo, Romeo & Julieta, H. Upmann and Vega Fina, amongst many others.

After his retirement from Tabacalera de Garcia his son Ricardo and Jose created Tabacalera La Matilde, where Matilde cigars are manufactured. For Jose, Tabacalera La Matilde, is the optimal factory: where all blends produced will have a limited production allowing him to use tobaccos that in the past he couldn’t use; at the same time applying strict quality control, assuring all cigars are meticulously handmade and aged to perfection. 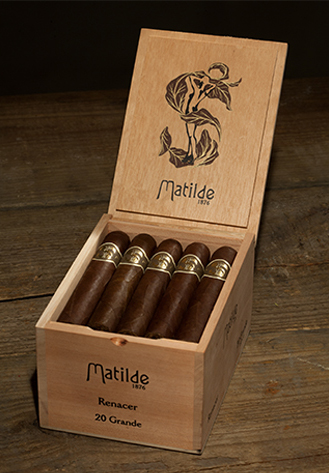 Jose says “we believe in quality over quantity. Our master cigar makers are remunerated on quality, assuring they take their time to create a masterpiece with every cigar they make. We are not doing this to produce everyday smokes, if the cigar is not going to be memorable we simply won’t make it.”

After a year of blending Jose reached what he calls his best work so far: Matilde “Renacer.” He believes that “Renacer,” meaning rebirth, was a suitable name for his first Matilde line. “It represents the rebirth of Matilde, an old Dominican brand, and my new stage in blending and manufacturing,” says Jose.

Using carefully selected Dominican and Nicaraguan filler, held by a Dominican binder, and finished with an exquisite Ecuadorian Habano wrapper Matilde “Renacer” promises to be a smoke to remember. The cigar is medium to full bodied with predominant flavors of dark Dominican coffee and the creaminess and sweetness of rich dark chocolate.

The cigars will be distributed by La Matilde Cigar Company, beginning in the USA and Dominican Republic.