March 3, 2013 (Havana, Cuba) — Over a million dollars (890,000 euros) were raised during the traditional auction at the end of the Habano Festival, with all the funds going into Cuba’s Public Healthcare System.

Six lots of deluxe humidors were sold under the gavel during the gala night dedicated to the Partagas brand. More than a thousand Habano experts and lovers enjoyed a delicious meal in which different dishes from international cuisine, wines, spirits and Habanos were paired. 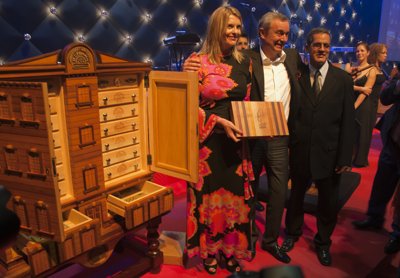 Celebrated U.S. actor Danny Glover received the 15th Habano Festival Special Award for his close ties of friendship with Cuba and his battle for peace and justice.

Mr. Glover underscored the injustice imprisonment of the five Cuban antiterrorists, “five brave men who deserve to come back home with their families,” he said.

Habanos S.A. co-presidents Walfrido Hernandez and Luis Sanchez Harguindey gave guests a special salute and invited everybody to puff on the first Partagas Grand Reserve, just reserved for that occasion. Another special moment was the presentation of the Habano of the Year Award in the Communication category, handed over by former tennis star Boris Becker –he won half a dozen Grand Slam titles during his career-to Phoenicia Cyprus, Habano distributor in the Middle East and Africa.

During the closing ceremony, a special humidor dedicated to the 15th Habano Festival was raffled to put an end to an event that gathered businesspeople, collectors, sommeliers, tasters, executives, artists, producers and lovers of Cuban cigars.

The big Habano bash featured the performance of top artists and musicians, such as Omara Portuondo, Mayito, Pablo FG, among others.

Last but not least, next year’s edition, slated for Feb. 24-28, 2014, was enthusiastically summoned.