February 5, 2014 (Miami, Fla.) — Royal Gold Cigars has partnered with renowned cigar manufacturer Drew Estate for their latest premium, hand-rolled cigar release, NIRVANA CAMEROON SELECTION. The new cigar features a luscious, light-brown, Rosado wrapper grown in the Eastern province of Cameroon, Africa.
The wrapper is grown by small farmers who, when it’s time to cure the tobacco, clear an area of land and construct a rustic curing barn. This completely natural process translates into a leaf almost devoid of disease and also produces some of the best tasting Cameroon leaf in the world. The origin of the Cameroon seed varietal is Sumatra Indonesia, which has been grown in Africa for over 60 years.
The balance of the blend consists of fillers from Nicaragua, specifically Jalapa and Estelí, along with a portion from the Jamastran region of Honduras. The binder is San Andreas tobacco from Mexico. 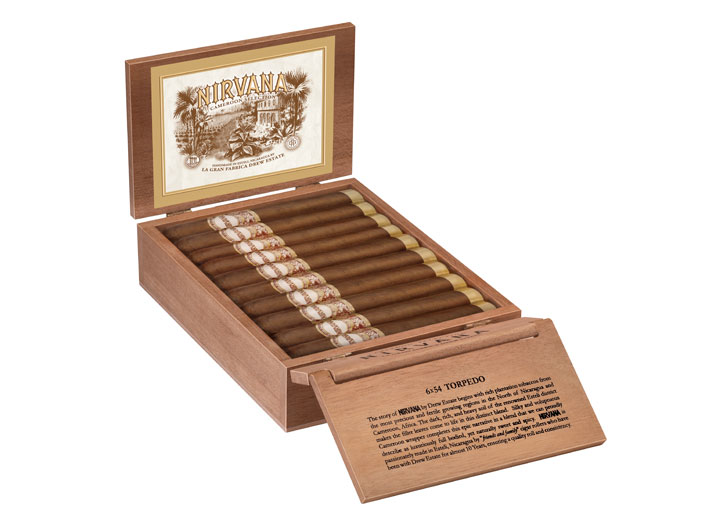 When reached for comment, Drew Estate co-founder Marvin Samel responded from their Miami office stating that, “the beauty behind the Nirvana blend is the combination of Cameroon wrapper and Nicaraguan filler leaves. Cameroon leaf is from Africa and is known for its sweetness and a natural sweet spice taste. Blending the strength, body, and richness of the Nicaraguan tobacco with the Cameroon allows a nuanced & layered depth to really come through. This is not an old fashioned mild Cammy. Quite the contrary.”
Co-founder and company namesake Jonathan Drew stated, “Nirvana is extremely important to Drew Estate Tobacco Company for a variety of reasons. First, Nirvana will join our product lineup as one of only two brands that we produce for strategic partners. Second, our relationship with Alex Goldman is akin to that of a brother. When he hurts, we hurt. When he succeeds, our hearts are filled with pride.
The brand Nirvana is a long-term relationship that begins with the Cammy Selection. Testing and experimenting with different blends, different algorithms of leaf and concept – is the beauty of creation. We have a lifetime to learn together. Nirvana will be that common space and bond between DE and Royal Gold. We will deliver something beautiful that proves itself over time. We are in no rush.” The new NIRVANA line is offered in five sizes, including a 6×46 Corona Gorda, 5×52 Robusto, 6×52 Toro, 6×54 Torpedo, and finally a 4×44 size called the “Silencio”. The line will be available exclusively through Royal Gold Cigars distribution network. The first shipment of NIRVANA will be shipped in unique, limited edition, wooden display boxes featuring beautiful silk screen graphics.
The cigars are produced at Drew Estate’s La Gran Fabrica in Estelí, Nicaragua. The facility currently produces 95,000 hand-rolled cigars per day, without the assistance of any machines. The factory is known for their other highly-praised lines, including Herrera Esteli, Liga Privada, Undercrown, ACID Cigars by Drew Estate, and many more.
When asked about the new partnership with Royal Gold Cigars and Drew Estate, company president Michael Cellucci shared his excitement. “We have worked with Alex (Goldman) for years and have always been close friends. This new venture allowed us to collaborate on a project we are both proud of and both committed to.”
Royal Gold Cigars president Alex Goldman stated that, “When I started Royal Gold at the beginning of 2013, my vision was to work with the best blenders and factories in the world to create our brands. Of course, Drew Estate was right at the top of the list. The talent and creativity of the Drew Estate team, combined with all the resources that Royal Gold, its parent company, and my own history in the cigar business, allowed us to create a truly special blend. The limited nature of the Cameroon wrapper will not allow us to produce all the cigars that we feel the market will demand, but you can be sure that neither Drew Estate nor Royal Gold will trade quality for quantity – we will keep the production limited to ensure the best possible product is delivered to our consumers. Both the Royal Gold and Drew Estate names and logos appear on the packaging, and as such we will always stand behind the quality of this product. This is just the first brand of what I hope will be a long term collaboration between Royal Gold Cigars and Drew Estate”