November 4th, 2013 (Basel, Switzerland) — Davidoff, a global brand known for its excellence in luxury goods, announces the opening of its Davidoff Lounge at Burns Tobacconist in Downtown Chattanooga, TN, the latest of its kind in the United States.

Davidoff lounge members can now enjoy their favorite cigar in a sophisticated and comfortable setting. The Davidoff Lounge features more than 1,500 square feet of space with soaring 12 foot ceilings, as well as amenities with urban-industrial inspired materials, comfortable furnishings, and lavish appointments in décor and privacy.  Original architectural features of the old building include exposed brick walls and large industrial windows. Soft lighting, custom leather chairs and décor create a distinct balance between down-to-earth industrial and warm traditional charm. Large arched French doors, connecting the Davidoff lounge to a boardroom intended for members to conduct meetings and hold private events, flank a two-sided fireplace. The boardroom also offers 100 humidified custom lockers for members to store their personal cigars securely.  The members-only lounge is equipped with staff and offers a wide variety of dining and spirits to provide a premium experience.

Davidoff commissioned NYC urban artists URNY to create a 3-dimensional wall sculpture depicting the fusion of the tobacco industry and the downtown urban flavor of Chattanooga. URNY artists Fernando “Ski” Romero and Mike “2ESAE” Baca were on hand to assemble and display their latest creation during the grand opening on October 24th, featuring Davidoff’s Master Blender Henke Kelner and 125 guests and lounge members.

The Davidoff lounge is located on the second floor of Burns Tobacconist in downtown Chattanooga.  Burns is an appointed merchant of the Davidoff brands and carries an extensive line of products.  The well-appointed shop features a brand new humidor, which has been featured in industry publications.  The shop also has a selection of cigar amenities as well as shaving products and men’s gifts.

Owner Phil Windham lit up his first cigar, a Davidoff Aniversario #1, after reading an article about one of his favorite pool players in Cigar Aficionado magazine.  He quickly developed a passion for the relaxing hobby and delved into the cigar business.  Mr. Windham started with a small walk-in humidor in the back of his Chattanooga Billiard Club location in East Chattanooga.  Soon, he added a private cigar-smoking lounge and business was growing. His latest 2013 projects involved opening the 3rd Burns Tobacconist location and building the Davidoff lounge, which occupies the entire 2nd floor of the 3-story building.

Mr. Windham is proud of the relationship he’s built with Davidoff within the cigar industry.  While reflecting on the value of time, he stated, “Time can be most beautifully filled while relaxing and enjoying a cigar.” 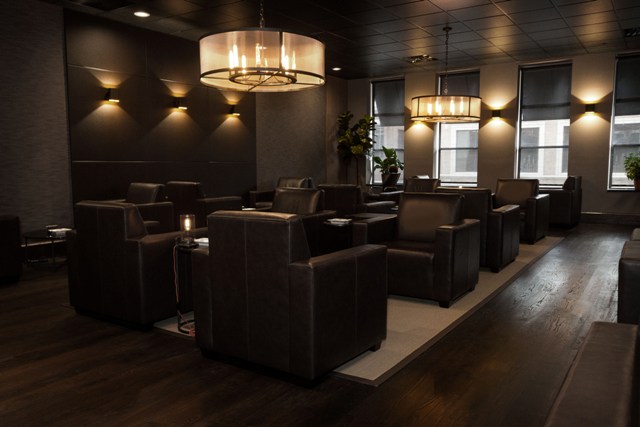