July 26, 2012 — Bolivar 681, a mild-to-strong taste habano that was around between the 1960s and 1990s within the Partagas portfolio, was picked by Habanos S.A. to be the first Regional Edition ever rolled out for Bulgaria.

This exceptional habano, that had been previously recreated in 2006 as an original replica of the Partagas Ancient Humidor, featuring 200 boxes distributed around the world, was presented by Habanos S.A. and Kaliman Caribe GmbH, exclusive distributor in Bulgaria.

The official launch of this singular gem –held on Nov. 17, 2011 in Sofia- was attended by over 40 representatives of all major mass media. Function attendees were entertained by Bulgaria’s Olympic-gold-medal-winning gymnastics team, together with celebrated crooner Desi Slava and members of the Pambos Dancing Center.

The Bolivar 681 was ritually introduced with the accompaniment of the La Guardia Orchestra.

In his keynote remarks, Habanos S.A.’s Vice President for Entrepreneurial Development, Javier Terres, said the BOLIVAR 681 is a very peculiar cigar designed for smokers of all stripes, yet most for those who can actually puff on a genuine habano.

Attendees had the opportunity to scribble down their views in a special guestbook called “Creation of History”, an event that has definitely gone down in the records of Bulgaria’s modern cigar history.

As it’s been customary, Kalima Caribe handed out the Habano Awards that recognize the most faithful habano buffs in Bulgaria.

During the gala dinner, the commemorative BOLIVAR 681 silver coin was specially minted to authenticate the Regional Edition. 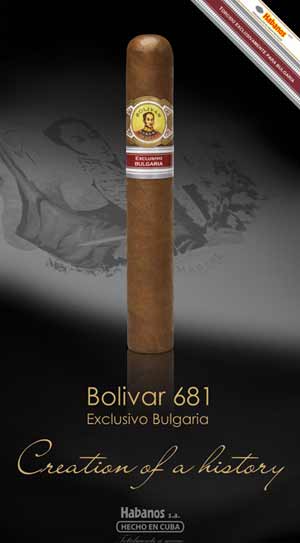