Always impeccably dressed, Michael Herklots has been in the industry more than 15 years, first as a store manager at the Humidor, then as a sales associate at the now-defunct Gloucester Street Cigar Company in Boston, Mass.

He then went on to become the General Manager at the Davidoff of Geneva store at Columbus Circle before being promoted to head the New York City retail operations for Davidoff.

In 2011, he was hired by Nat Sherman to become the executive director of Retail and Brand Development, and just last month he was promoted again, this time to vice-president of retail and brand development for the Nat Sherman brand.

When I visited New York to attend the Davidoff Nicaragua launch last year, one of my main goals was not only to photograph the Nat Sherman store, but also to photograph a portrait of Herklots in the place he has called home for the last few years. He graciously gave me a tour, then allowed me to photograph him for about 20 minutes. 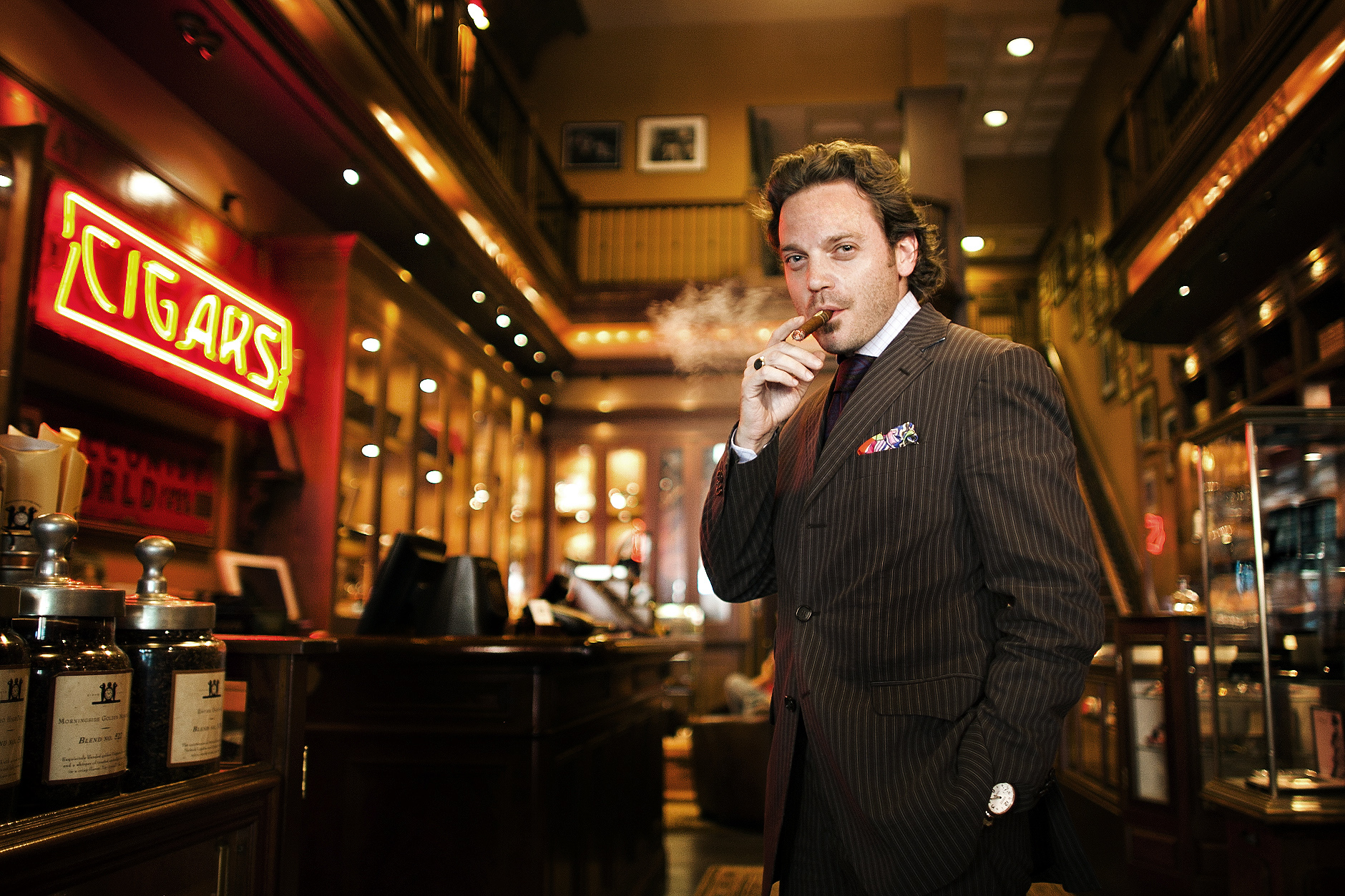 For you photographers, here are the technical details: this photograph was taken with a Canon 1D Mark III, a 24 f/1.4 lens set at f/1.4 at 1/60th of a sec and an ISO 800. There are a combination of three light sources: two handheld video lights on stage left lighting the face, natural light from a door and window in front of him and incandescent light in the store itself. The photograph was taken in RAW (.CR2) format, converted in Adobe Lightroom and color corrected, sharpened and cropped in Adobe Photoshop.

Now, a little about my thought process while taking this cigar. I have written before about how I, as a photographer using composition, am always trying to find ways to make your eyes go where I want them to go when first seeing a photograph. This portrait may very well be the best example that I have photographed, which I will explain below.

First, as is almost always the case, I used a somewhat extreme version of the rule of thirds, which states that, “an image should be imagined as divided into nine equal parts by two equally-spaced horizontal lines and two equally-spaced vertical lines, and that important compositional elements should be placed along these lines or their intersections.” The idea is to create tension within the frame by putting the main subject in a spot that is different from where your mind automatically wants the subject to be, i.e. in the center of the frame. Secondly, I used a large element in the frame to counterbalance the use of the rule of thirds above, by placing Herklots directly across from the Cigars sign. Thirdly, I used an extremely short depth of field (in this case, wide open at f/1.4) to separate Herklots from the background, but shooting a wide angle lens (in this case, a 24mm, although it is an effective 35mm with the 1.3x crop of the 1DMIII sensor) which allows me to show off the background without blurring so much that you can’t tell where he is.

Finally, I used the multitude of elements in the background to cause your eyes to look exactly where I want them to, at Herklots himself. As you can see from the photo below, each one of the lines that I pointed out are forcing your mind to follow the predetermined path.